In the early morning of February 11, 2013 I realized that we were indeed in the jungle inside our comfy room at Pachira Lodge in Tortuguero, Costa Rica. I was working on the computer without my glasses on and I saw something black moving on the wall. Given that I am shortsighted, it was too fuzzy for me to see what was crawling around on the wall, but I decided to let it go. I continued, until some time later, I saw something black crawl onto my bed. I did not even need my glasses on to realize instantly I was dealing with a huge spider. It must have been at least an inch in width!

I immediately jumped up, screamed, grabbed one of my shoes and swiped at it. Success! The spider was lying all crumpled up on the floor beside the bed without moving any longer. No doubt we were in a rain forest where there are lots of creepy crawlies. (Fortunately the rest of my stay turned out insect free. I didn’t even see any mosquitos…) 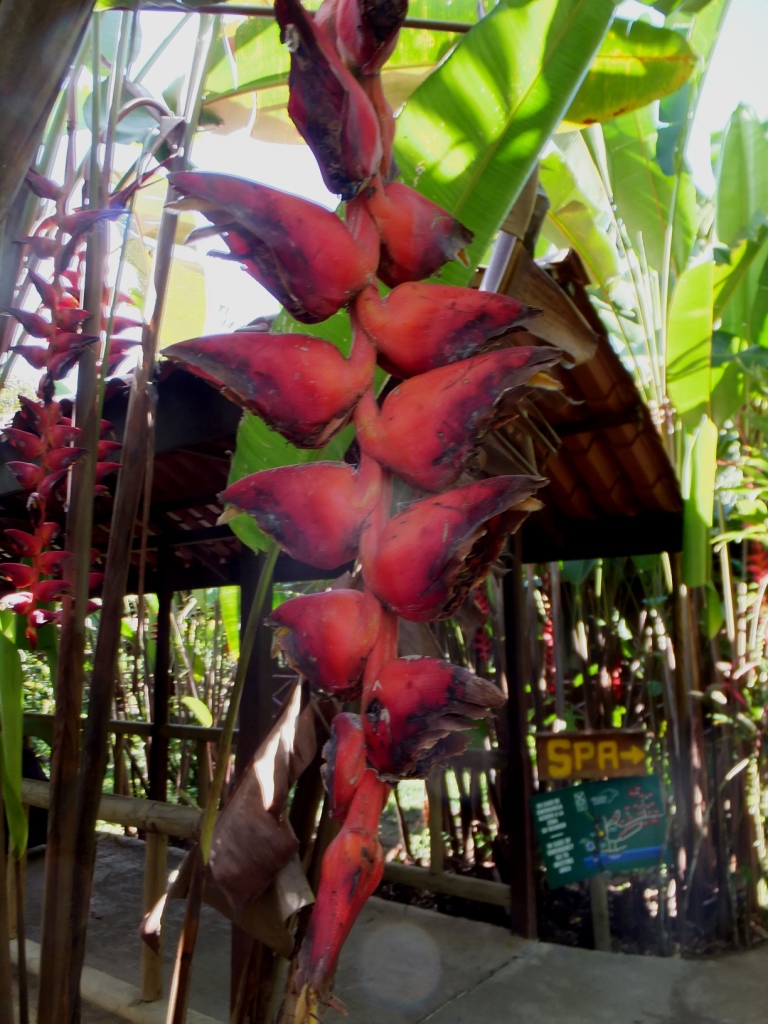 The jungle of Tortuguero

During breakfast, some of our co-travellers were commenting that they were woken up very early by howler monkeys, but funny enough I had slept through that. Our room was located close to the reception area, and the day before I had seen these primates hang out in the more distant parts of the Pachira Lodge premises.

By 9 am on this brilliant day, our Caravan tour group was ready to go. We all piled into two long high-speed sightseeing boats and stopped at the ranger station where our nature guide Adrian Sambola stopped to get our national park passes to “make us legal” as he said. Shortly after, we had our authorization to proceed into the national park. Our captain Anselmo, who Adrian explained is deaf-mute, communicated with Adrian through hand signals and started to slow the boat down as we approached the shoreline of the Tortuguero River. 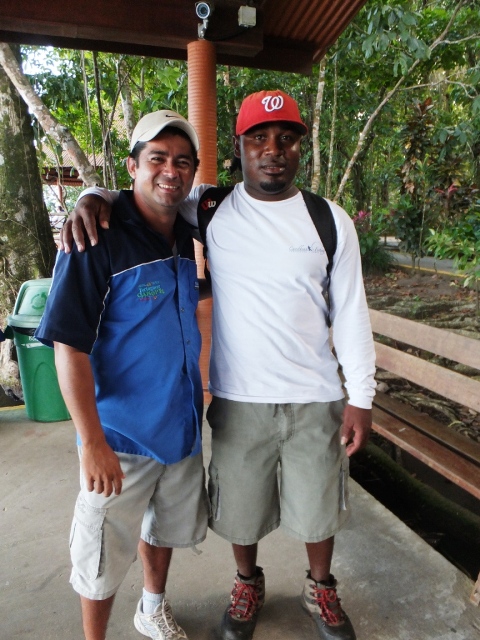 Anselmo drove the boat very close to the shady trees and Adrian pointed out the beautiful provision tree flower which is also called “pachira aquatic” or Malabar chestnut. Then we moved a few metres away and Adrian pointed out a green vine snake which, due to its colour, was almost impossible to see. It took me a couple of minutes to pick up the long slender green snake whose head was resting on one of the tree branches.

Continuing our boat ride, we also learned about some of the trees in Tortuguero National Park. The raffia palm, for example, is used for making textiles and hats while the leaves of the royal palm were used to thatch houses. Adrian added that these kinds of roofs attract large amounts of insects, but as an antidote, any type of cooking smoke will chase them away. So it’s definitely best not to upgrade to a gas or electrical stove. 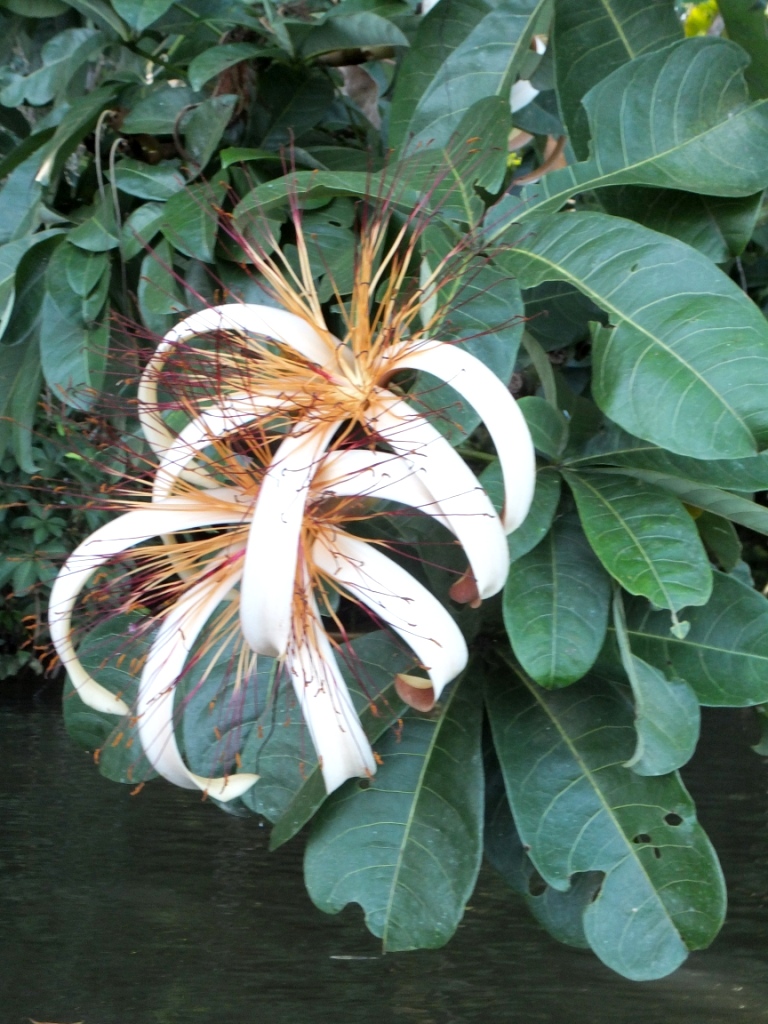 Floating slowly up the Tortuguero River, we saw a wide variety of birds while howler monkeys could be heard in the canopy above. Male howlers are equipped with a bone in their throat which creates that distinctive guttural howl that can be heard from distances up to 2 miles (more than 3 kilometers) away.

As far as birds are concerned, we also had a chance to see a baby blue heron, which is still white, and a brown and black northern jacana, a tropical wading bird that builds its nests on top of water lilies and water hyacinths. Adrian pointed out that this bird is very unusual as it is polyandrous – one female often has 5 to 10 males and the female is larger than the male. Not surprisingly then, the jacana is the symbol of the Costa Rican womens’ movement. 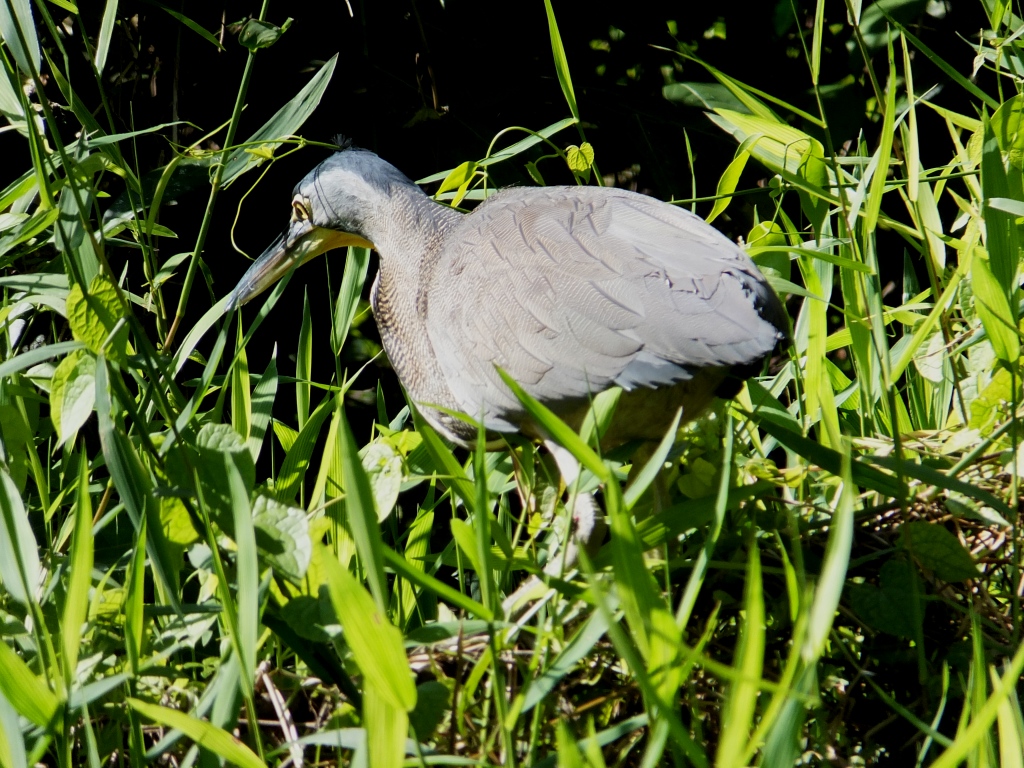 One of the highlights of our morning boat tour through the Tortuguero National Park was the sight of a caiman from less than 6 feet or 2 metres away. The animal was lying quietly in the water, and only its eyes and nostrils were sticking out. Adrian enlightened us that caimans, who grow up to about 5 feet here, are surprisingly peaceful. They don’t attack humans unless someone tries to hold them or disturbs their nest.

Then we saw a yellow–crowned night heron, a nocturnal bird that actually preys on hatching baby turtles. When the baby turtles hatch early in the morning on the beaches of Tortuguero, these predators are waiting for them, and with a special acid, they are able to digest the baby turtles’ hard shells.  Not far away we caught a glimpse of a “Jesus Christ lizard”, or emerald basilisk, whose young are able to run on water when threatened. Adults get too heavy for that and have to resort to swimming and diving. 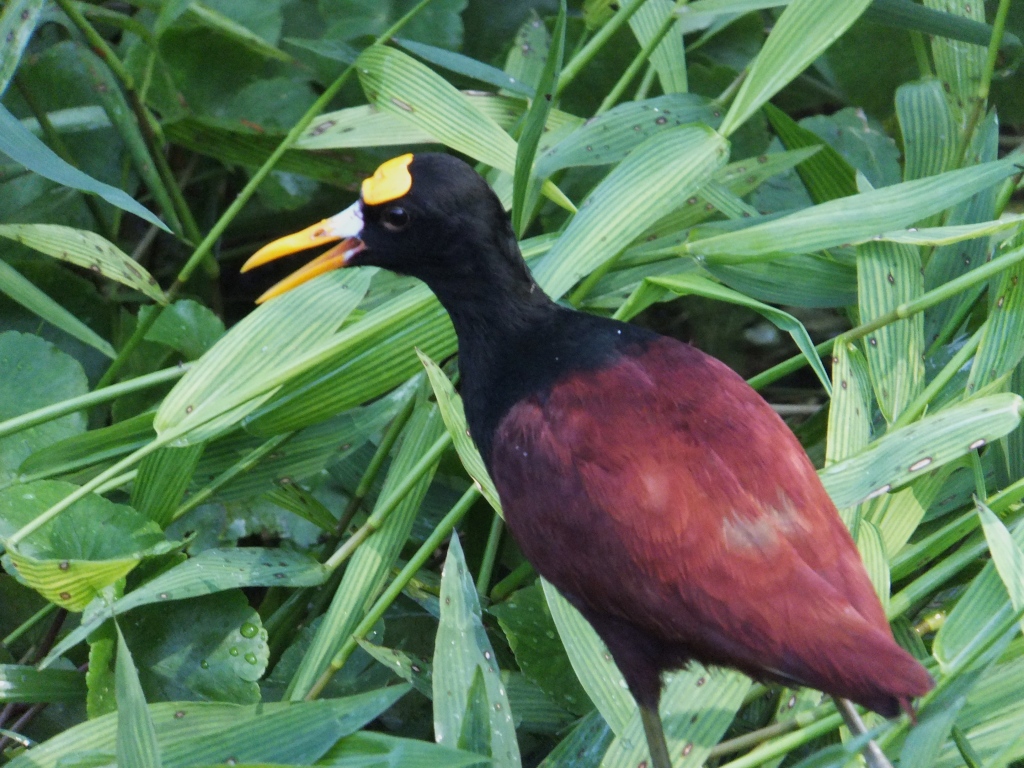 Anselmo took us into a canal that was heavily overgrown with rainforest vegetation, and Adrian explained that this man-made canal was made by a logging company. Before tourism became the main economic driver here in Tortuguero, the main income sources were logging and turtle-hunting. Precious hard woods such as cedar, mahogany, oak, and rose wood were harvested here. The local mountain almonds are often referred to as “iron woods”, and they are so heavy that they sink instead of float, so they could not be logged.

While in other parts of Costa Rica, mountain almonds were heavily logged and almost brought to extinction, here in Tortuguero, which does not have road access, they survive and thrive. They provide a suitable habitat for Great Green Macaws which are an endangered species. Adrian proudly announced that a pair of Great Green Macaws is nesting on Tortuguero Mountain.  There are also a large number of Scarlet Macaws in this area. 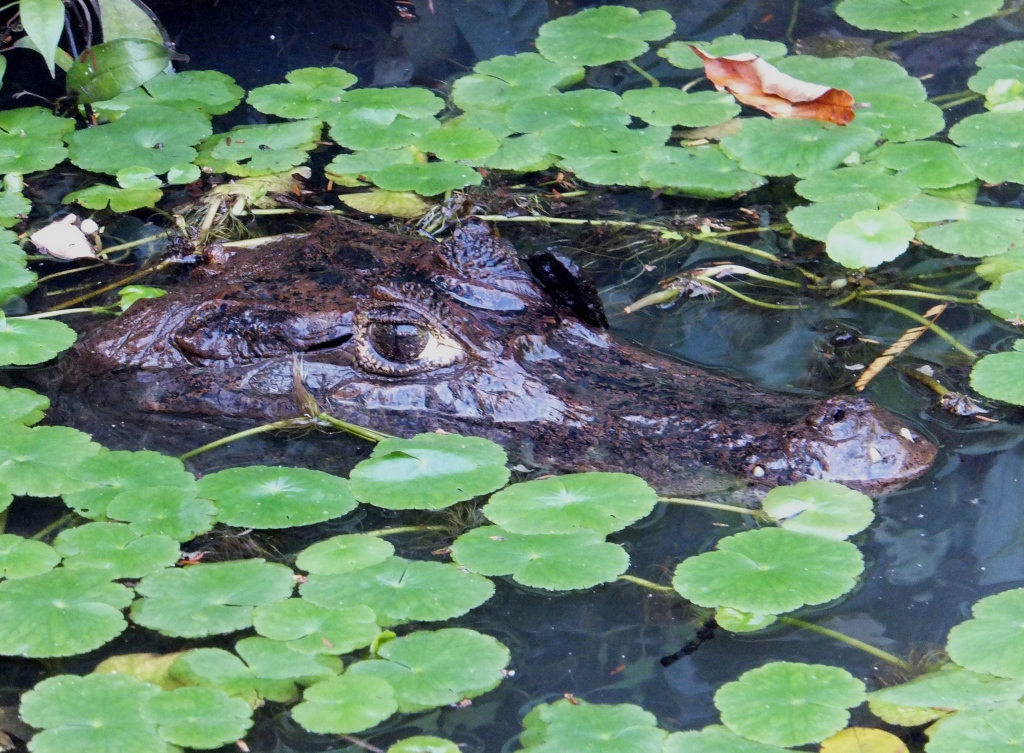 A caiman, lurking in between the water lilies

That is the interesting and impressive part about Costa Rica’s dedication to eco-tourism, particularly in the Tortuguero area: while sea turtles were heavily hunted before and almost driven to extinction, a real conservation mindset has set in and the majority of locals now makes their living from tourism. This is one more example of how tourism can have tremendous benefits for a local economy as well as the environment and the local plant and animal species.

Of course there were many animals we did not get to see on our tour of Tortuguero National Park: this 47,000 acre (19,000 hectare) large nature reserve is also home to jaguars, tapirs, manatees and many other animals, some of which are quite shy. But we had definitely caught a glimpse of many different species of animals and plants that are indigenous to this rainforest terrain. 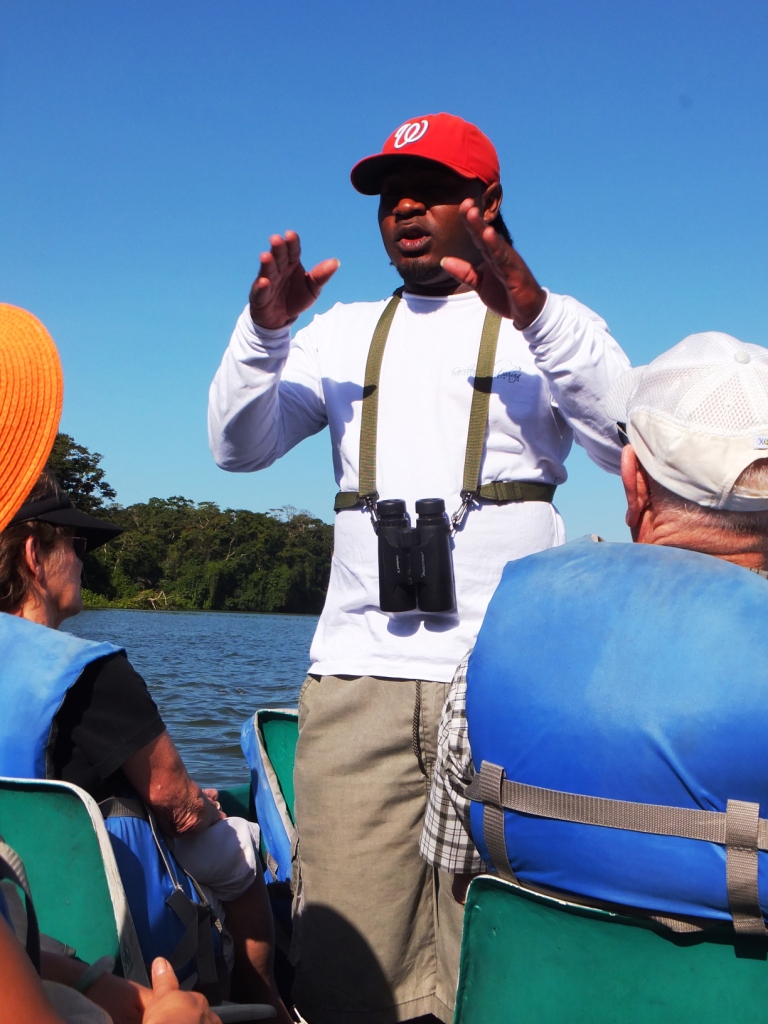 Adrian educates us about Tortuguero

By about 10:30 we were back at our eco-lodge and were welcomed with a pizza snack. Before our next organized activity in the afternoon, I planned to explore the grounds of Pachira Lodge, our cozy home in the jungle.

Images from our Boat Tour through Tortuguero National Park: