Champlain Township: A Visit to Abadin Bed and Breakfast, Dinner in Hawkesbury and a Walking Tour of l’Orignal

On the first weekend of October 2013 I embarked on another Ontario excursion – this time into Eastern Ontario, more precisely the Ottawa Valley and the region of Champlain Township. Through my website I had connected with Shirley, who together with her husband Ed runs a chic bed and breakfast called Abadin B&B. Shirley suggested that her area would be a great destination to explore and I totally agreed. So on a Friday afternoon I made the 5-hour drive to Eastern Ontario. Located in the small village of L’Orignal, Abadin B&B is a spacious modern property with 5 chic guest bedrooms, all lovingly decorated by Shirley. Located about 1 hour from both Ottawa and Montreal, Abadin B&B provides travellers with a great location for exploring two big metropolitan cities, the scenic countryside surrounding L’Orignal as well as the Quebec mountains that are located just on the other side of the Ottawa River. Shirley and Ed are very gracious hosts and truly enjoy being B&B owners. They made me feel right at home in their elegant abode. 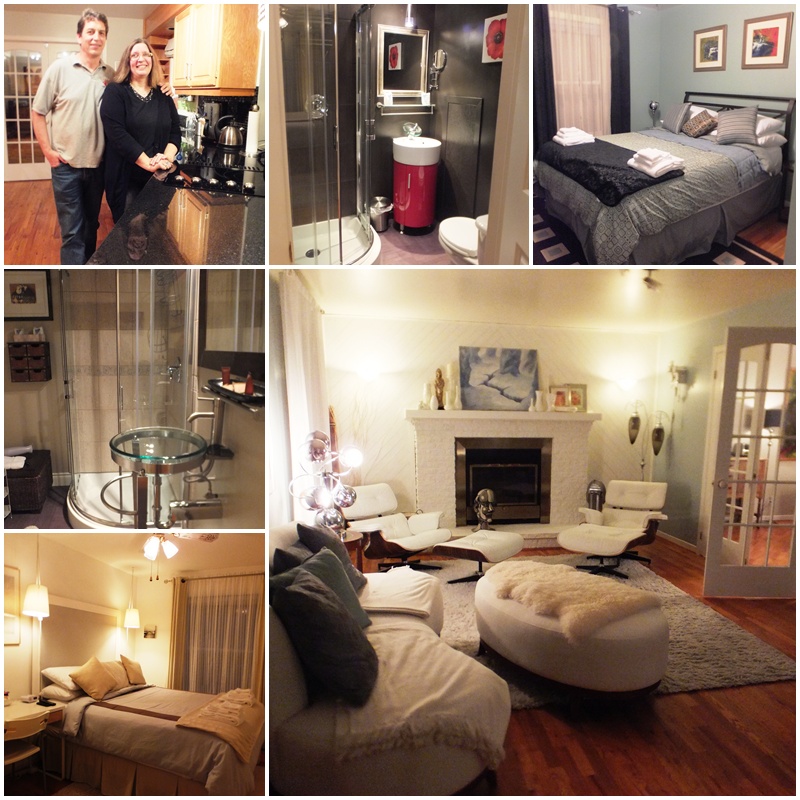 Shirley Lindemann of the Abadin B&B in L’Original is not only a passionate B&B owner; she is also an accomplished artist. Drawing on her original background as an art therapist, a profession in which she worked for many years in Germany before coming to Canada, Shirley has been creating original works of art for decades. She has turned her bed and breakfast into a veritable art gallery that showcases paintings created by herself and other artists. I was also fascinated by the one-of-a-kind metal sculptures that Shirley has actually welded herself. Shirley expresses her artistic eye not only through her original artwork but also through her gifted interior design touches. She has combined elegant modern design with occasional unique flea-market finds and has equipped her B&B with all the modern conveniences such as stylish modern bathrooms, flat-screen TVs and high quality bedding. As an art lover myself, I really enjoyed these unique artistic touches. 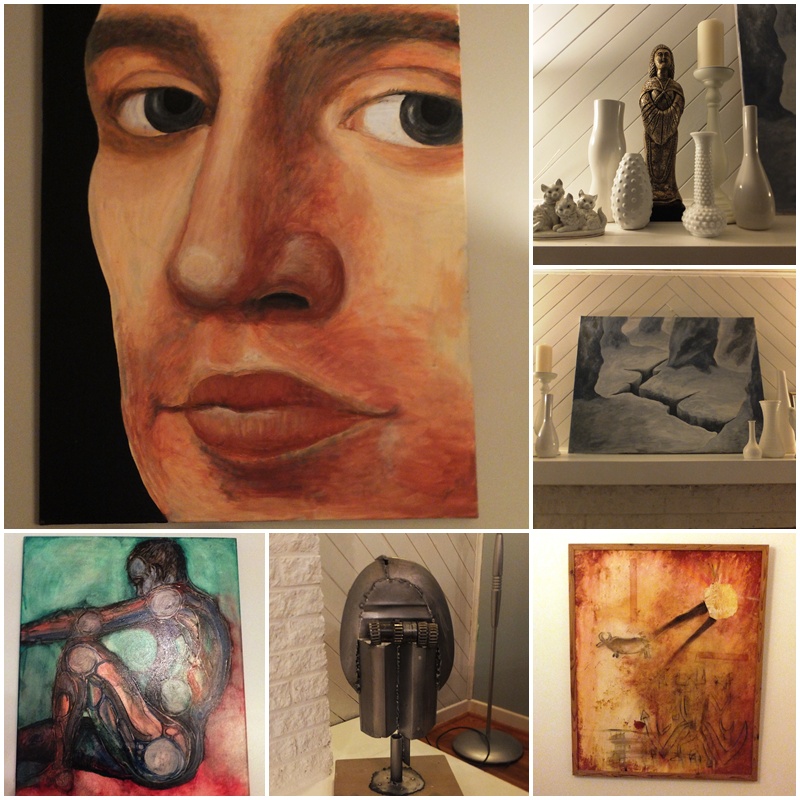 Shirley is a talented artist

After a nice long chat with Shirley & Ed from the Abadin B&B I drove about 10 minutes to the town of Hawkesbury, a community with a population of about 10,500 people, to have dinner. One of the most popular restaurants in town is called Stephanie’s Bar & Grill, a large restaurant that has been in business for more than 20 years. After looking at the extensive menu I decided on the “Table d’hote”, the daily menu which offered several choices, including Filet Mignon, Cod Filet Meunniere, Poached Salmon Florentine and others more. Starting with a “soupe du jour”, a hearty bean soup, I continued with Fresh Asparagus & Grilled Peppers in a balsamic vinaigrette, followed by Stephanie’s Fettuccini, a tasty main course featuring chicken, mushroom, bacon and shallots in a creamy Alfredo sauce. Finally, I finished an enjoyable dinner with a home-made Crème Brulée and a tea. At a price of C$25.95, this 4-course meal offered tremendous value. 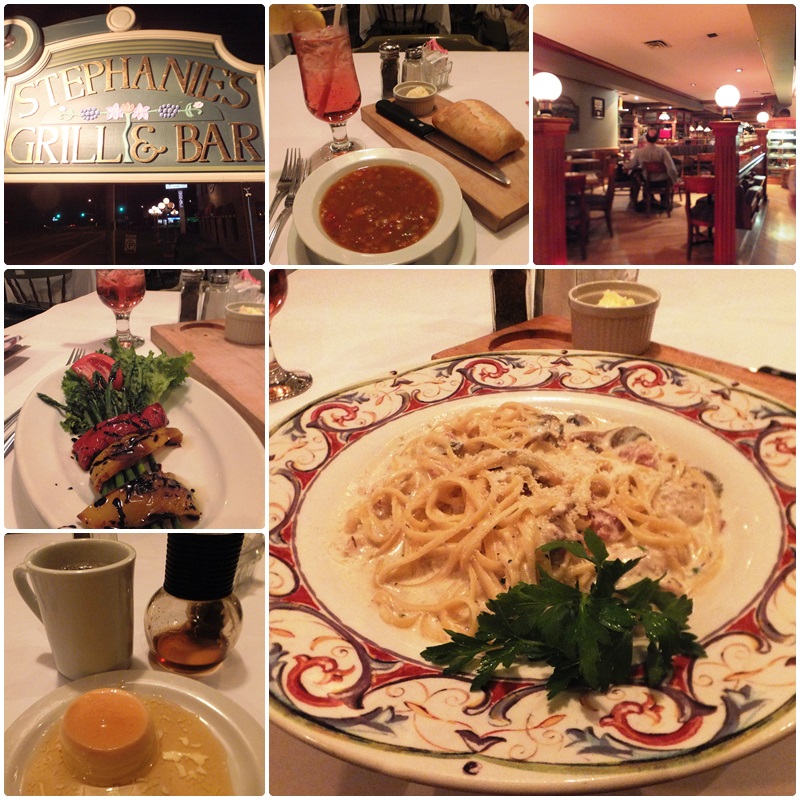 My second day in Champlain Township started nice and early. After a good night’s sleep at the Abadin B&B, I came into the dining room and saw that hosts Shirley and Ed Lindemann had already prepared breakfast for their guests. We started with a healthy yoghurt followed by German waffles with a delicious strawberry fruit sauce, one of my absolute favourites. Shirley’s artistic talents also manifest themselves in creatively carved fruit arrangements. Together with the other guests and the hosts, we enjoyed a nice conversation around the breakfast table. My day was packed full of sightseeing so I had to get going early, but I managed to take some quick snaps around the property. Abadin B&B has an attractive outdoor sitting area with various pieces of artwork dotting the property. Shirley’s creative touch is visible inside and outside. 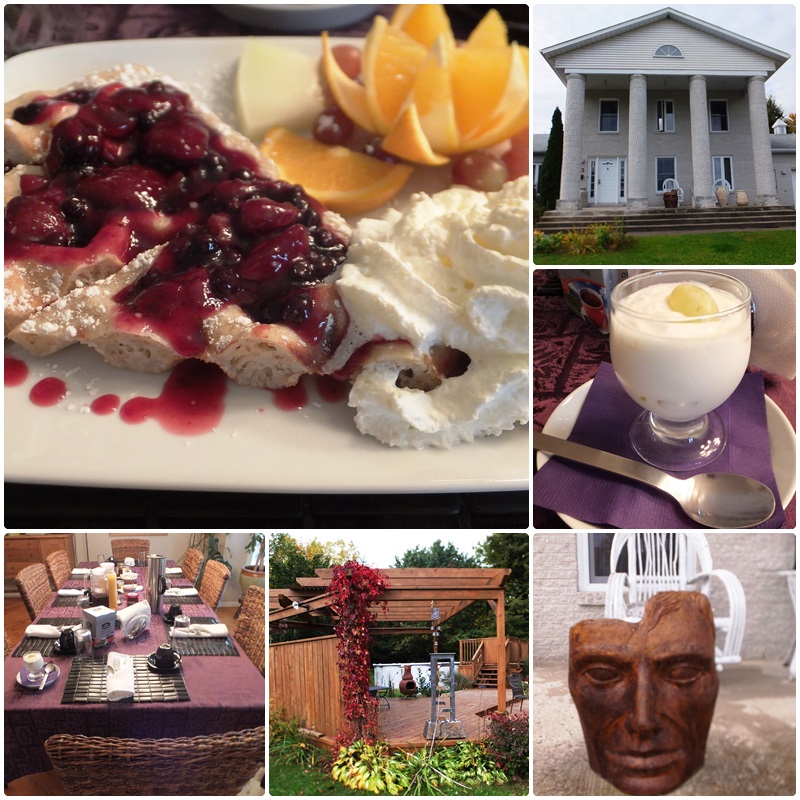 Breakfast at the Abadin B&B

Bright and early on this October Saturday I met local expert Jacques Des Becquets, who was going to give me a tour of L’Original and the surrounding area. L’Orignal is a small village that is located right on the Ottawa River, about halfway between Montreal and Ottawa. We only drove a few minutes from the Abadin B&B and arrived at our first destination: L’Orignal Beach, a nice waterfront park with a phenomenal view of the Ottawa River, with Quebec beckoning on the other side. The name of the village is very interesting: originally called “Pointe à l’Orignal “ (“Moose Point”), this is where moose used to cross the river. The cloudy sky was clearing up nicely and we were in store for a sunny day, perfect for exploring Champlain Township. 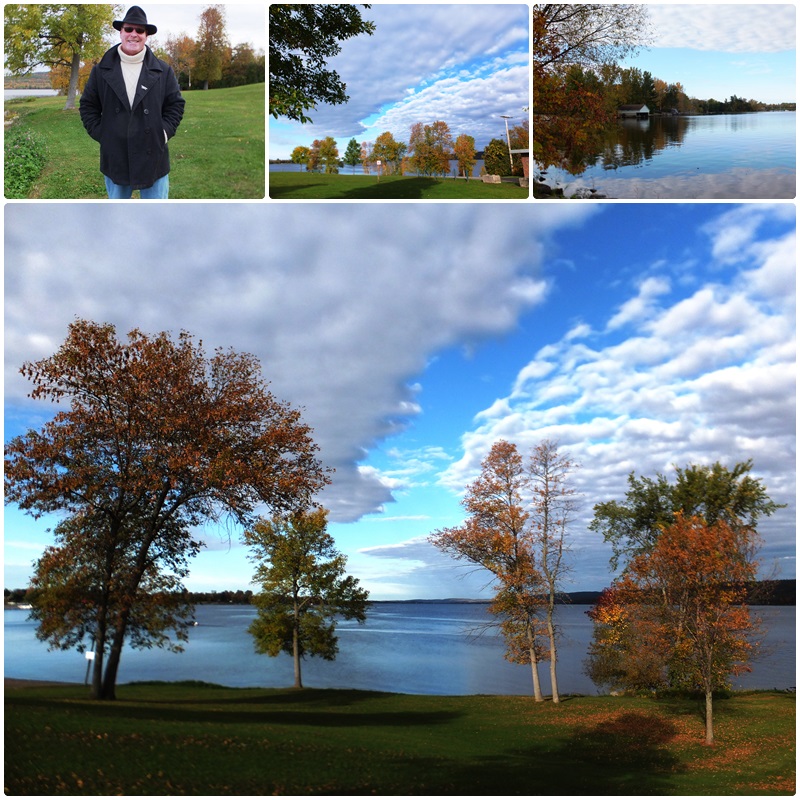 With its location right on the Ottawa River, L’Orignal is a pretty village of about 2000 people with a unique history. The main street has many grand Victorian mansions, and some of them were nicely decorated for Thanksgiving. L’Orignal is a francophone village in (mostly English-speaking) Ontario whose history dates back to 1674, to the days of the seigniorial system of New France. It was one of only two seigneuries that the French king granted in what is Ontario today. A “seigneurie” was actually a land grant under the system of New France. In 1791, the British government created a separation between Upper Canada, designated for English immigrants, and French-speaking Lower Canada (the southern portion of today’s Quebec). In 1796, an American citizen, Nathaniel Hazard Treadwell, bought the seigneurie but was forced to go back to the United States when he refused to pay allegiance to the British Crown during the War of 1812. In 1824, his son was reinstated on this land and that’s when settlement started. L’Orignal was incorporated as a village in 1876 and became part of Champlain Township in 1997. Today, L’Orignal is a peaceful village with a location midway between Ottawa and Montreal. 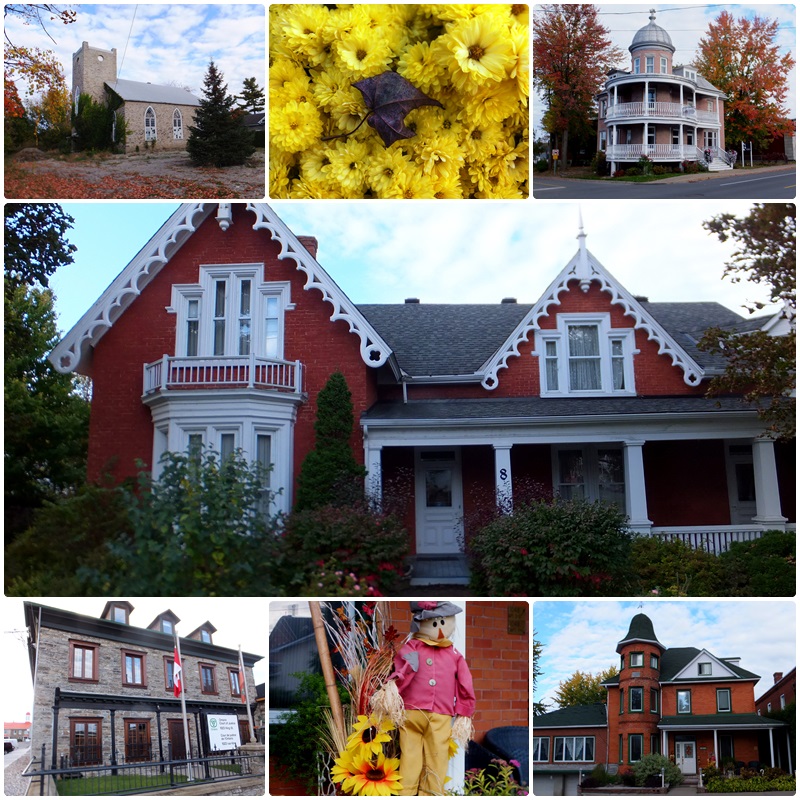 A walking tour of L’Orignal

Together with local expert Jacques Des Besquets, we continued our walk through L’Original. This small village is the seat of Prescott-Russell County and has several important historic and administrative buildings such as the Superior Court of Justice, St. Jean Baptiste Parish, St. Andrew’s Church and the Old Jail of L’Orignal. The jail, shown in the top centre of this picture, is a particularly interesting institution – built between 1824 and 1825, it was the oldest prison in operation in Ontario until it was decommissioned in 1998. Today it is a local history museum and holds many interesting artifacts and exhibitions. 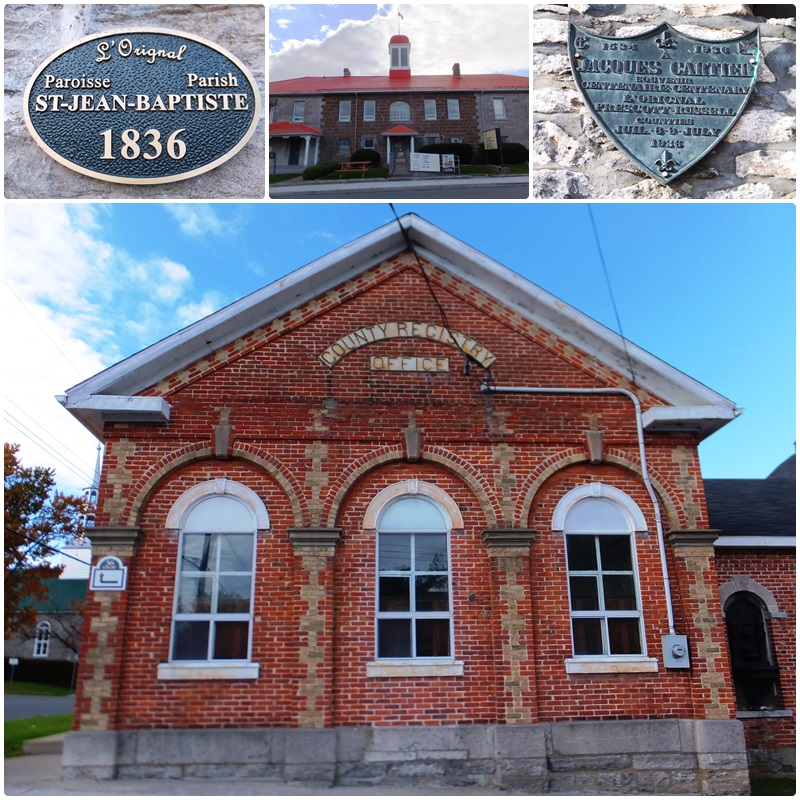 L’Orignal has many historic buildings.

The next stop on our explorations of Champlain Township was Vankleek Hill, known widely as the “Gingerbread Capital of Ontario”.