The entrance off Fallsview Boulevard with its circular driveway, brightly lit marquee, glass-covered dome and illuminated tower is quite grandiose and one of the most impressive sights in Niagara Falls, Ontario.  Immediately upon entering we were greeted by a huge water feature called “the Teslatron”, which is reminiscent of a transformer, a reminder of Niagara Falls’ importance as an electricity generating location. A part of the transformer station that was built in 1904 still forms the eastern façade of the building. Publicly owned by the Ontario Lottery and Gaming Corporation, this hotel and casino complex returns a portion of its profits back to the Ontario government. 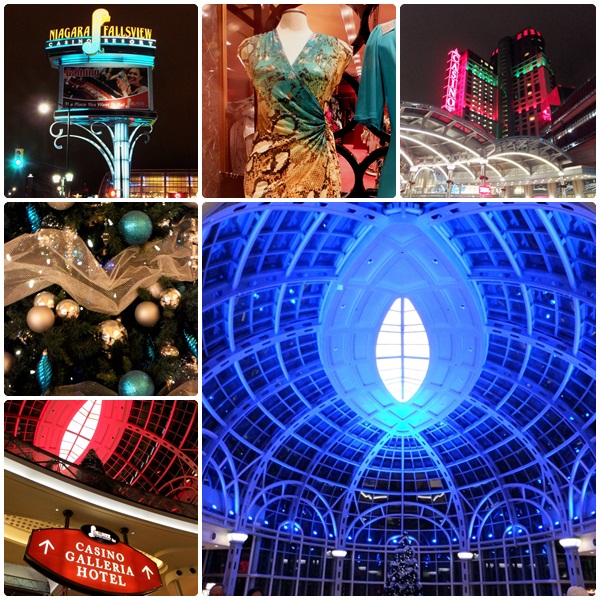 From the “Teslatron” water feature you can walk along two long hallways filled with retail stores. The Galleria Shopping Centre has more than 30 shops, including fashion and accessories stores, gifts and souvenirs and various services. The Fallsview Casino Resort has more than a dozen restaurants and 3 bars and lounges. The food choices offered include a variety of cuisines such as steak & seafood, Italian cuisine, Chinese & Asian eateries, buffets and deli and other dining options. The Café Court on the lower level has a number of affordable dining options including Tim Horton’s, Mama Mia’s, Johnny Rockets, Starbucks, the Second Cup and The Falls & Firkin – English Pub. It also has a pleasant food court with tables that overlook a pleasant courtyard with a view of the Great Falls.

I am not a gambler myself, but the main floor of the casino is an attractive facility with over 200,000 square feet (18,500 square metres) of gambling that includes slot machines, table games, a poker room, high limit gaming in the Salon Privé and VIP Services. And for those with problem gaming issues, there is a Responsible Gaming Information Centre on the main floor.

In addition to a huge choice in dining, gaming and accommodation, the Fallsview Casino Resort in Niagara Falls, Ontario, is also a major entertainment venue.  Celebrities such as Lionel Ritchie, Kenny Rogers, Dolly Parton, Jay Leno, Diana Ross or the Doobie Brothers have all performed here and every month has a new entertainment schedule.

Now that we had warmed up we were ready to continue our wintery walk of Niagara Falls, Ontario, during the CAA Festival of Lights.