So far I had been absolutely fortunate on my European trip – the weather had been gorgeous with no clouds in the sky for 10 days. After two days in Venice and four days in Vienna I had finally arrived in Styria, the Austrian province where I was born. On a beautiful Sunday morning we decided to embark on a family hike, and four sets of siblings (my brother and I, his wife and her sister, and her sister’s son and daughter, plus 4 young children – 3 siblings and cousin – went on a 20 minute drive to the foot of the Schöckl Mountain, the southernmost peak in the mountains surrounding Graz, Austria’s second largest city. We started our ascent in the forest and as we hiked up, the pathway got narrower and steeper. We hiked the last little bit to the top underneath the cable car, the steepest portion of the hike. Along the way we stopped several times to take in the breathtaking views of the surrounding Alpine landscapes. 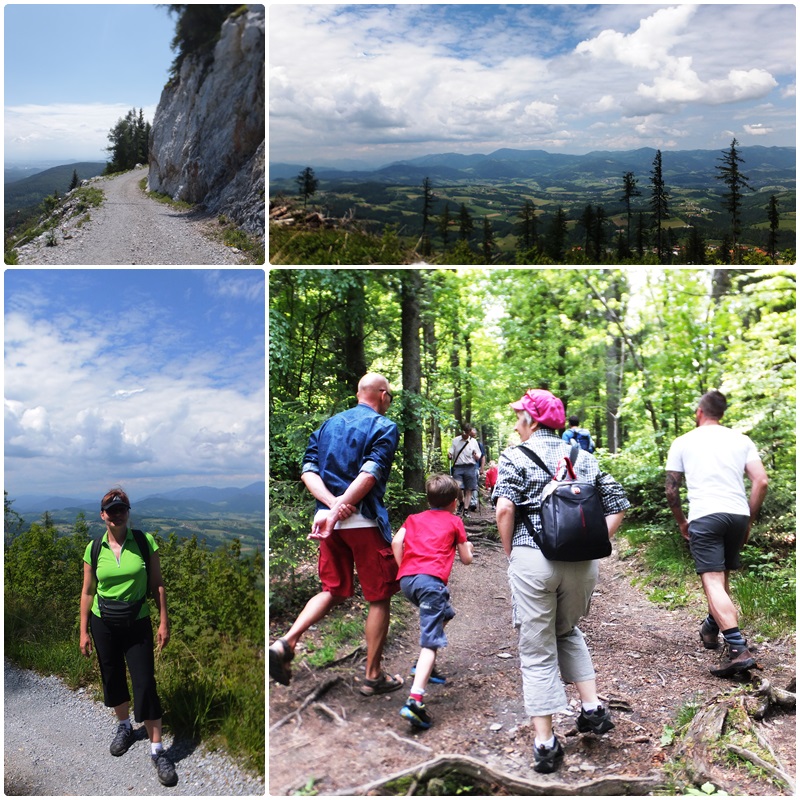 Ascending the Schöckl Mountain, a popular destination near Graz, the capital of Styria

By early afternoon we had reached the summit area of the Schöckl Mountain which is crowned by a long plateau. There are more than 10 restaurants and mountain huts on and around the mountain that provide hikers with hearty Austrian food, cold Styrian beer or a bottle of “Almdudler”, a traditional soft drink that is made of grape and apple juice and flavoured with herbs. I enjoyed a “Buchtel mit Vanillesauce”, a delicious pastry made of yeast dough that is filled with jam and covered with a thick vanilla sauce. This is the food of my childhood and after our hike I did not feel at all guilty about eating this sinful calorie-filled treat. 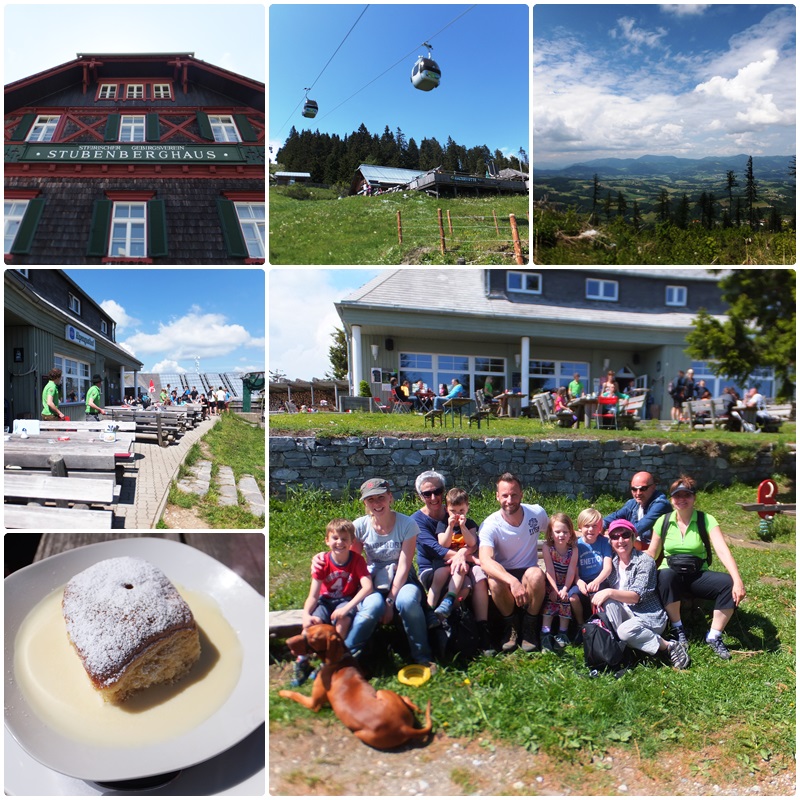 Stopping at a mountain hut for some typical Austrian food

After our rest at one of the mountain huts on the Schöckl Mountain we strolled on the top plateau to the summit which is located at an altitude of 1,445 m (or about 4,740 feet). The view from the summit towards the mountain chain of the Austrian Alps in Northern Styria is fantastic while towards the south and east the panorama stretches all the way into Slovenia and Hungary. The Schöckl Mountain became a destination for tourists in 1890 when the Stubenberghaus, a large mountain hut with a restaurant, was opened. In the winter the mountain also becomes a destination for skiers as the top can be reached by cable car from St. Radegund. The mountain is also easily reached from Graz, the capital of the Austrian province of Styria. To add a bit of thrill to the mountain experience, a summer toboggan run, the so-called “Hexenexpress” (“Witch’s Express”) delights adult and young hikers who race through 7 curves and 2 built-in jumps with speeds up to 40 km/h. 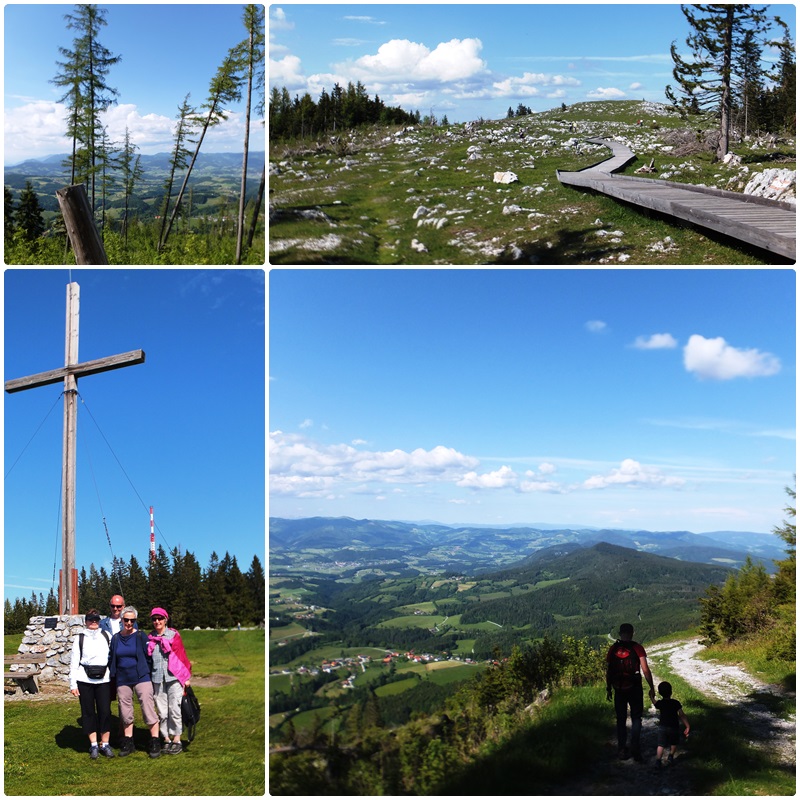 From the summit you can see the Austrian Alps in Northern Styria, Slovenia and Hungary

In the evening, after our long hike, we had an enjoyable outdoor dinner with my sister-in-law’s family. Typical regional delicacies in this part of Austria include smoked meat (usually pork), local cheeses, hard-boiled eggs and radishes, accompanied by delicious rye bread with a crispy crust. Classic Styrian cuisine also usually includes salads made with pumpkin seed oil – a dark green highly nutritious, nutty-tasting salad oil that is made from cold-pressed pumpkin seeds. A typical wine to accompany this would be the “Schilcher” variety, a rosé wine made of the local Blauer Wildbacher grape that is grown almost exclusively in Western Styria. Well-known local beers in Styria include Puntigamer, Schladminger and Gösser, which can even be bought in many liquor stores in Canada. After all, Austrians are the second largest consumers of beer per capita, behind the residents of the Czech Republic. 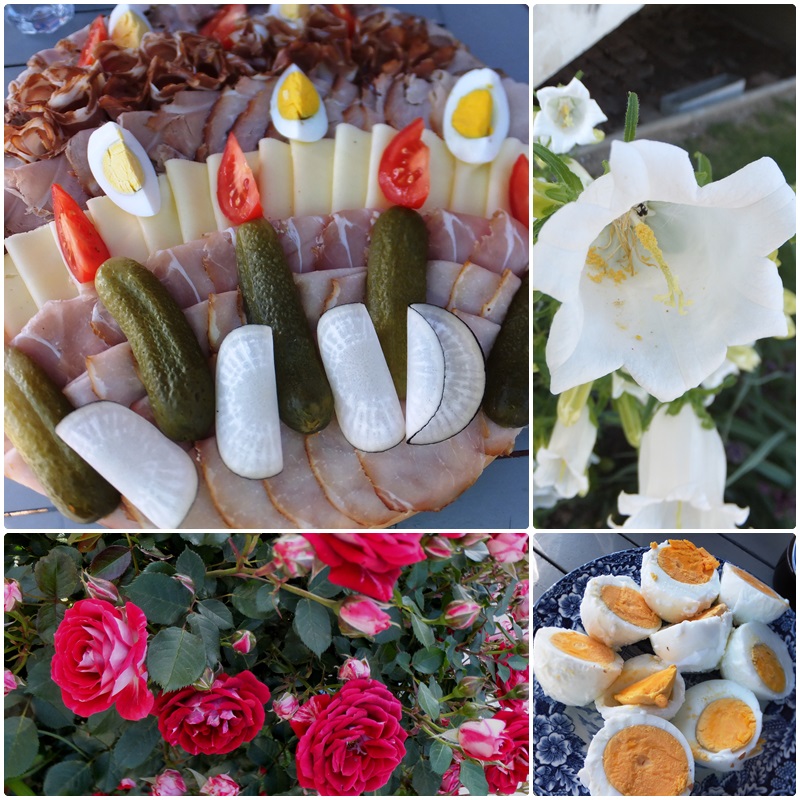 We enjoyed a nice meal after our long hike.

Styria is one of those European hidden gems that not many people know about, which makes it a great area to travel to. Travellers familiar with Austria normally are knowledgeable about Vienna, Salzburg and Innsbruck, but the region surrounding Graz and the entire province of Styria have not yet reached a high profile among international travelers. As a result, Styria’s lower prices and smaller crowds make it a great destination for a trip that combines outdoor activities, history and culture, and culinary explorations.