On February 11, 2013 I had enjoyed my personal tour of the Pachira Lodge eco-resort. In the mid-afternoon it was time for another boat tour in Tortuguero. At 3:00 pm three sightseeing boats full of Caravan tour travelers headed north on the Penitence River in search of more interesting animal sightings. Our experienced nature guide Adrian explained that, years ago, the river was very shallow and people would have to push their boats for hours to get towards the Nicaraguan border. Then they decided to dredge the river and build a series of man-made canals which has made boat traffic in this part of Costa Rica a lot easier.

Along the way we passed the Tortuguero Mountain, at 120 metres, or 360 feet, the highest point on Costa Rica’s Caribbean side. Adrian pointed out some long sack-like hanging bird’s nests that are built by a bird called Montezuma Oropendula, a very large species of oriole. These birds always build their nests on solitary trees in order to protect their brood from predators like white-faced monkeys. They often build 200 nests on one tree, and 100 of them will be empty in order to throw off giant cowbirds, who, like cuckoos, have a habit of laying their eggs in other birds’ nests to delegate incubation.

Long-nosed bats were sleeping on a wooden beam underneath the roof of a boat pier and Adrian mentioned that these animals are very important as they consume up to 1500 mosquitoes each night. A large Anhinga, also called a Snakebird, was spreading and flapping its wings in order to dry the feathers. These cormorant-like birds don’t have any natural oils coating their wings so they have to wait until their feathers dry before they can take to the air again. 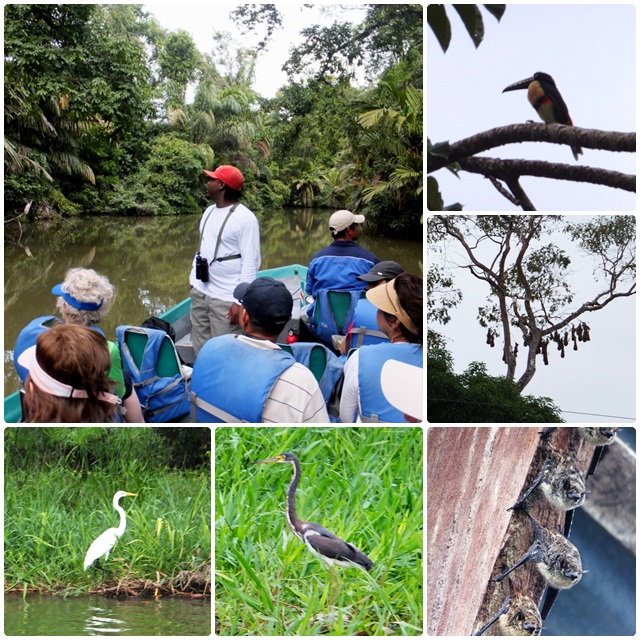 Another boat tour in Tortuguero

On a high tree beside the Penitence River we saw a lone howler monkey that appeared to be sleeping after consuming lots of fruit. Different kinds of tucans were flying overhead and Adrian informed us that these birds are actually rather mean: they steal other birds’ nest and babies. At the same time, they are also very playful birds and they can often be seen wrestling one another with their colourful beaks.

We slowly turned from the large river into a smaller canal that was framed by overhanging palm trees. We had entered Caño Palma, the Palm Canal. Soon we passed the Canadian biological research station called the Caño Palma Biological Station which is owned and operated by the Canadian Organization for Tropical Education and Rainforest Conservation. This organization is currently working on an ethnobotany study for the Tortuguero area as well as a marine turtle conservation project. This part of Costa Rica is indeed famous for its biodiversity.

Slowly we floated by the local village of San Francisco which only has about 200 inhabitants. Adrian pointed out a mimosa tree and added that it is actually poisonous. To subdue pain, pregnant howler monkeys and sloths actually eat leaves from this tree shortly before giving birth. So over thousands of years, these rainforest animals have learned about the pharmacological properties of the mimosa tree. 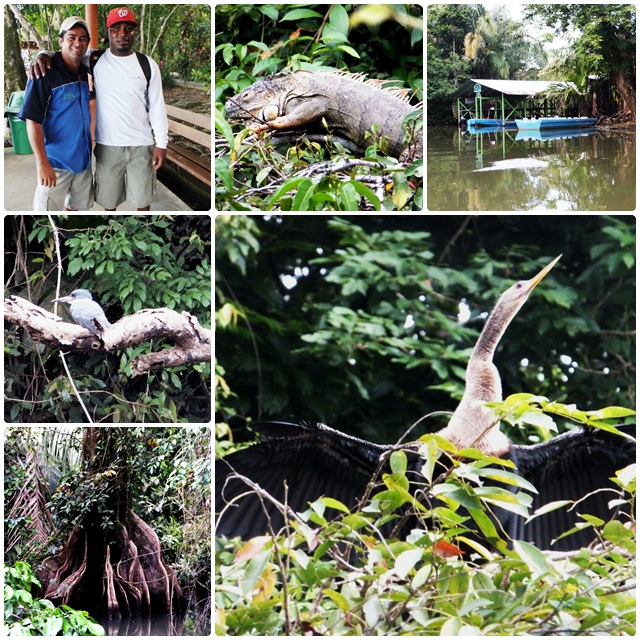 Adrian mentioned that in this narrow canal, monkeys are usually swinging back and forth between the palm trees. He also talked about local snakes, many of which are poisonous, but added that snakes will never attack humans unless they feel threatened. This is similar to sharks, he said, which generally do not attack humans unless threatened. Years ago, he had a very frightening experience in Nicaragua; together with two of his cousins, he went fishing in a boat off an island and their boat capsized. They ended up floating in the ocean for four days and did not get attacked by any of the wild animals. Needless to say, he added that this was the scariest experience in all his life. But even today when he goes back to Nicaragua, he still enjoys fishing.

We had been lucky with our boat tour since the overcast sky had held off and we did not get caught in a downpour. At the mouth of the Palm Canal we caught up with the two other sightseeing boats from Pachira Lodge and Anselmo gestured that we would do a little race on the way back to Tortuguero. We started in the last position, behind the other two boats, but when he opened the throttle we slowly climbed up to them and passed them on the wide open waters of the Penitence River. A high-speed boat ride is always an exhilarating experience, and Anselmo took us back quickly and safely to our eco-lodge for one final night in Tortuguero before continuing our trip tomorrow to Costa Rica’s famous Arenal Volcano.

Image Gallery from Our Caño Blanco Boat Ride in Tortuguero: