February 12, 2013 was our day for transferring from the Caribbean Coast of Costa Rica to the region around the Arenal Volcano and the plan was to break up the long drive with a visit to a pineapple plantation. So after a nice lunch in Guapiles where we had enjoyed some Costa Rican folk dancing, we continued on for another couple of hours to Finca Corsicana in the central part of the country.

Finca Corsicana is owned by the Collin Street Bakery, a bakery based in Corsicana Texas that is known for its pecan cakes, cheesecakes, pies, cookies, candies, nuts and other sweet treats. With their main operation located about 50 miles south of Dallas and many stores selling their products throughout Texas, the Collin Street Bakery also has a large online retail operation that will actually ship some of these sweet goodies conveniently to your home. They have been baking their DeLuxe Fruitcake now for more than 115 years. 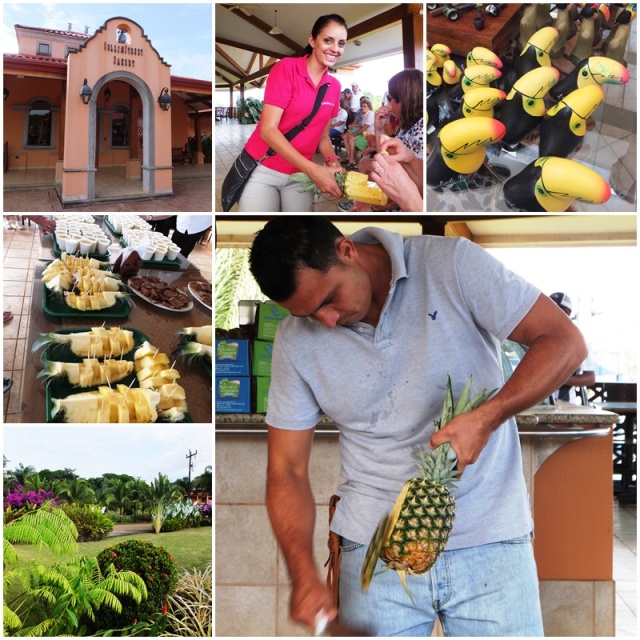 We congregated in a big outdoor pavilion and a young man started giving us a humorous lesson about how to best pick a ripe pineapple. He would ask the audience for their various ideas, applaud the answer, and after he finished clapping he inevitably came back with “no señor/ señora” as the answer was obviously wrong. All sorts of creative answers were being thrown out, from picking a piece of the crown to smelling the pineapple to squeezing it and many more. He kept us in suspense as to which method would be the correct one for picking a ripe pineapple.

Then he proceeded to cutting fresh pineapples with his ultra-sharp machete. Without using a table or a cutting board and simply holding the fruit in his hand, he first shaved off the skin of the fruit and chopped off the bottom in a decisive motion. Then, he skillfully cut long slices into the side of the fruit and cut individual pieces, pushed every second piece to the front voila – and the pineapple was ready to be served to an enthusiastic audience. 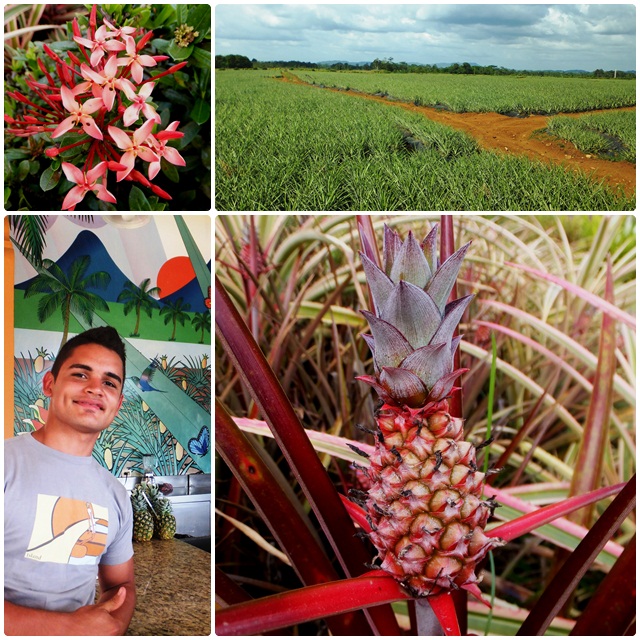 After teasing the crowd for so long, he was finally willing to reveal the secret of picking a proper pineapple: you need to look for a fruit with bigger pineapple eyes, check for a symmetrical shape in the fruit and the crown, and the bottom should be golden. One of the visitors had actually mentioned that you need to look for a golden bottom, and he ended up winning a fresh organic pineapple and a fruit cake from the Collin Street Bakery.

On a big table, a nice spread had been set up for us that consisted of fresh organic pineapple chunks, pineapple cake and freshly squeezed pineapple juice. The fruit indeed tasted sweeter and juicier than any of the pineapples available here in Canadian supermarkets and seemed to be less acidic as well.

After a brief visit to the gift store at Finca Corsicana pineapple plantation, we were back on the bus again, making our way towards our destination for the next couple of days: the Arenal Springs Hotel in La Fortuna, located right next to Costa Rica’s most famous volcano.

Image gallery from our visit to the Finca Corsicana pineapple plantation: