My first full day in Edinburgh, May 28, 2014, was a bit of a grey and drizzly affair. Determined to get the most out of my six short days in Scotland, I took an early morning walk from the Haymarket area towards the Old Town. I took in the dark brown sandstone buildings and urban townhouse and made my first stop at St. Mary’s Cathedral, Scottish Episcopal church from the late 19th century. Interestingly, the cathedral was funded by two spinster sisters who owned a large estate nearby. The two spires on the west side have been named “Barbara” and “Mary”, in reference to the Barbara and Mary Walker who financed the cathedral’s construction. Another unique detail about St. Mary’s is that it still upholds the tradition of daily choral services. 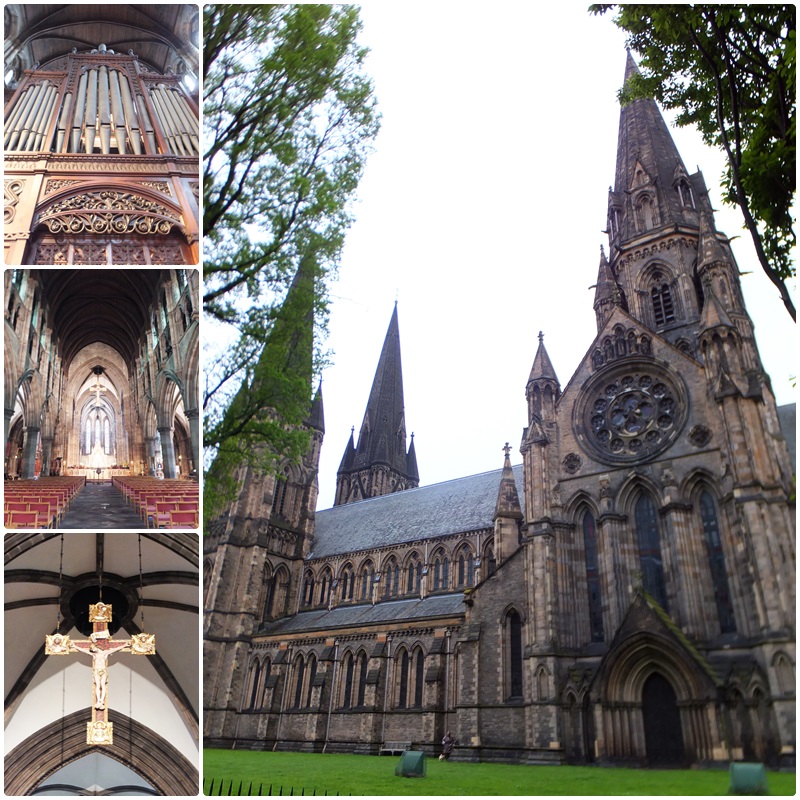 After my visit of St. Mary’s Cathedral I strolled past the Edinburgh International Conference Centre south of castle hill past Usher Hall, a concert hall that is located between the Royal Lyceum Theatre and the Traverse Theatre. Finally I reached King’s Stables Road from where I had my first look at the imposing Castle Rock which rises up to 80 metres from the surrounding landscape. Edinburgh Castle truly dominates the city’s skyline and is its most visited paid attraction with more than 1.2 million visitors per year. 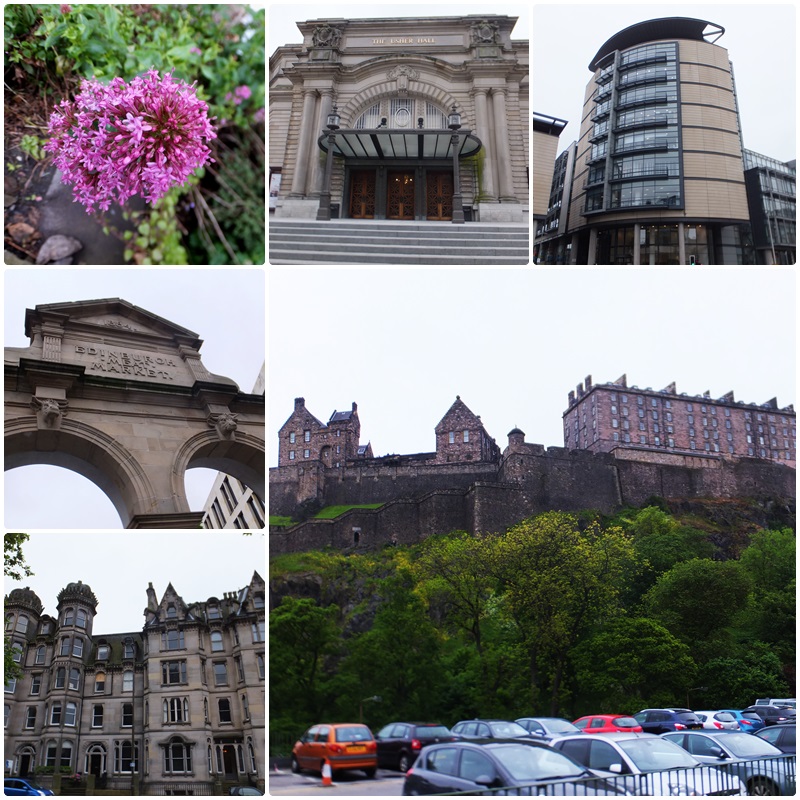 Sights along my walk to Castle Rock

In the drizzle I climbed up to Castle Rock on Johnston Terrace, followed by a short walk on a small steep stairway that took me up to the western end of the Royal Mile at the Esplanade, the large public space in front of Edinburgh Castle. I stopped in at the Royal Mile Armory which bills itself as the Ultimate Scottish Shop where you can purchase everything from kilts, to woolen tartan scarves, clan gifts, mugs and all sorts of Scottish souvenirs and foods, including the famous “haggis”, a savoury pudding containing sheep’s heart, liver and lungs. Across the street is The Witchery by the Castle, a fine dining landmark in Edinburgh in a stunning historic setting. 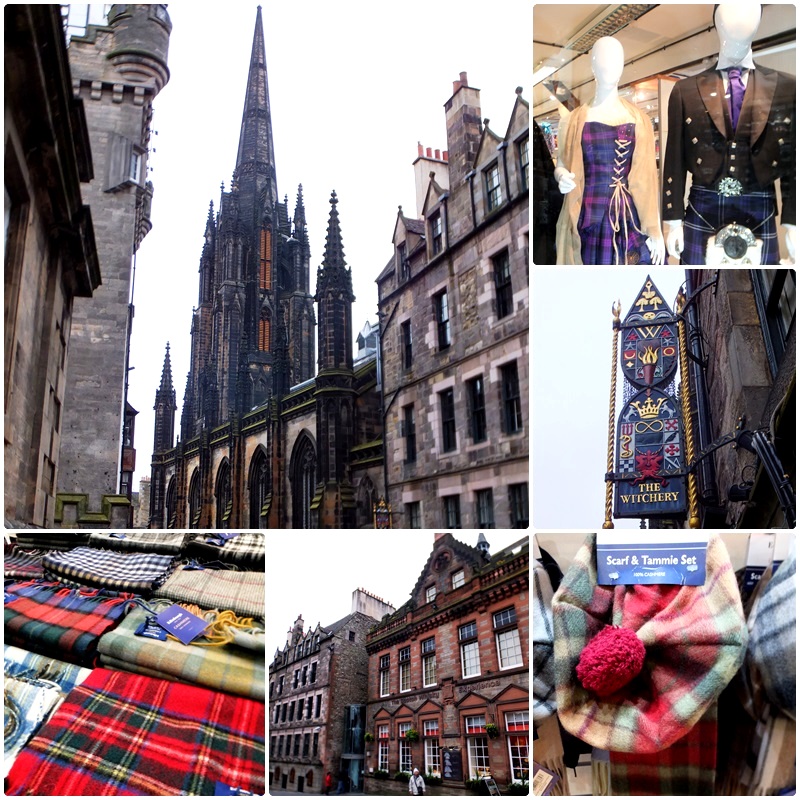 Interesting sights at the top of Castle Rock

The next point on my itinerary in the Scottish capital was Edinburgh Castle, the city’s most visited paid attraction. Sitting on a volcanic rock with a great vantage point over the city, this fortress had its origin in the 12th century and was a royal residence until the early 1600s after which it was used as military barracks. As Scottish nationalism grew in the 19th century, the role of Edinburgh Castle gained in importance again and various restoration programs were initiated. The Esplanade square in front of the castle is the location of the Royal Edinburgh Military Tattoo, a mindboggling outdoor event that features military and civilian performers from all over the world. 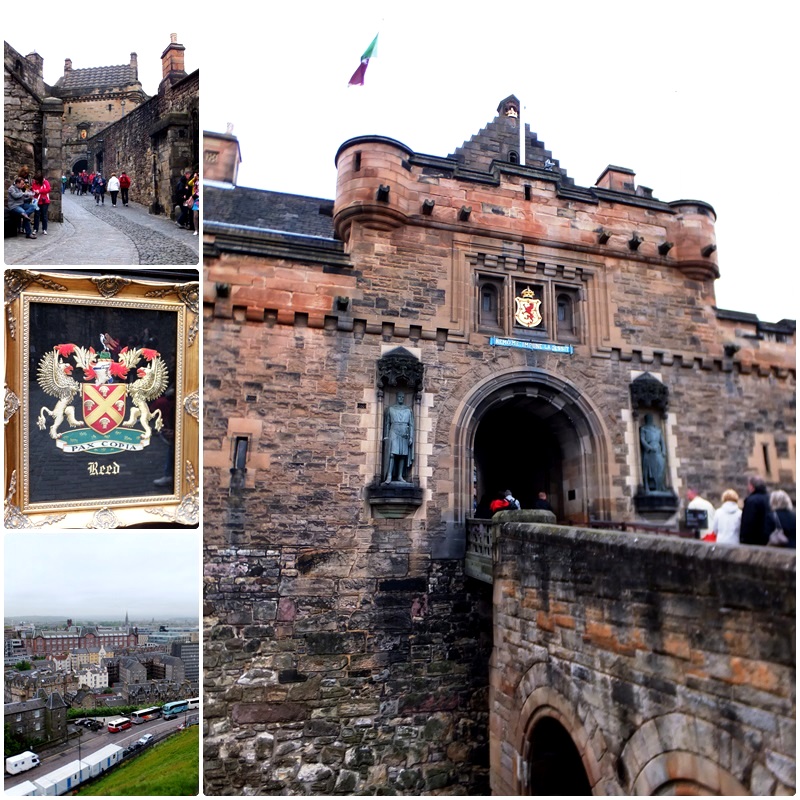 Edinburgh Castle, the foremost attraction in the city

Highlights of Edinburgh Castle include the Royal Palace with the Crown Jewels, St. Margaret’s Chapel – the oldest part of the castle, the Great Hall with its magnificent hammerbeam roof and the Prisons of War where prisoners from France, America, Spain and many other countries were held. The Regimental Museums and the National War Museum are also located inside this forbidding castle. Mons Meg, a popular photo motif, is one of the world’s most famous guns that was given to the Scottish king by the Duke of Burgundy in 1457. Today, you can actually rent the castle for a wedding or other special event and say your vows inside the 12th century St. Margaret’s Chapel. 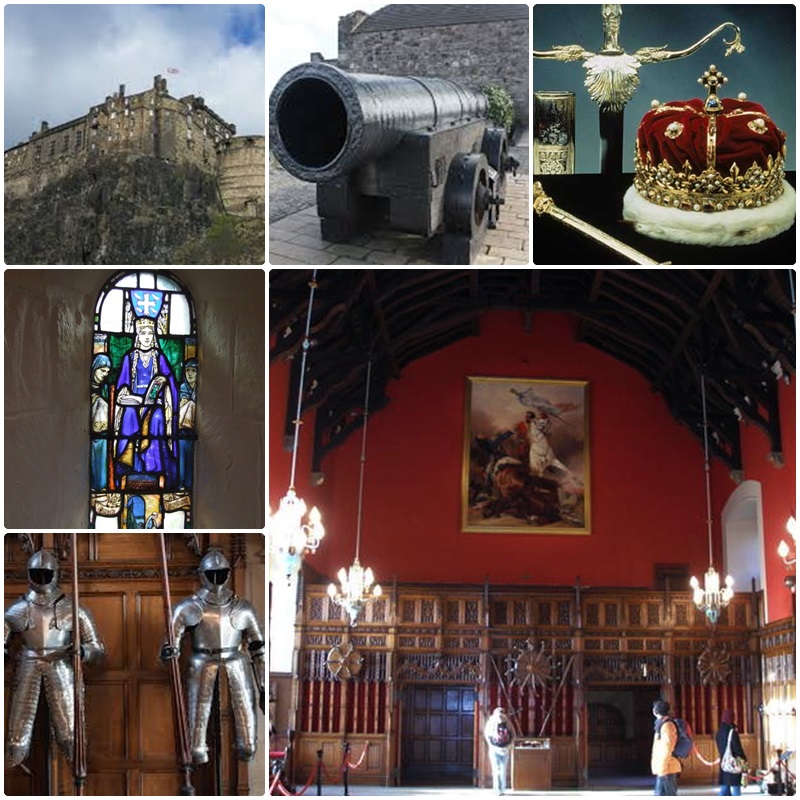 Edinburgh Castle and some its most famous sights

Next on my itinerary was a stroll on the Royal Mile, Edinburgh’s famous historic boulevard.