A Doubledecker Sightseeing Tour of Glasgow and the Riverside Museum

On my second day in Scotland, May 29, 2014, the weather was again cloudy, drizzly and cool, but that did not stop me from going on a day trip from Edinburgh. I took the train from the Haymarket Station to Glasgow, Scotland’s largest city. The ride lasted about an hour and took me right to the Queen Street Station in downtown Glasgow. With a population of more than 600,000 or 2.3 million in the surrounding metropolitan area, Glasgow is by far the largest city in Scotland. From a tourism point of view Glasgow is often given short shrift because it does not have the stunning medieval architecture that Edinburgh has. As a former industrial centre, it has undergone periods of economic decline, the consequences of which are still visible in different parts of the city. But regeneration efforts have helped restore Glasgow to some of its former glory, and particularly the downtown area abounds with impressive sandstone buildings from the 18th and 19th centuries. In the drizzly cool weather I took a ride on a double-decker sightseeing bus to get to know the city. Our guide educated us about Glasgow’s history and explained that it was an important trading port for tobacco and later cotton in the 18th century. For a time, Glasgow was the “Second City of the British Empire”. The city’s economic significance continued into the 19th century when it was one of the world’s foremost centres for chemicals, textiles, engineering as well as shipbuilding. After a period of decline in the 20th century, Glasgow today is among Europe’s top 10 financial centers. 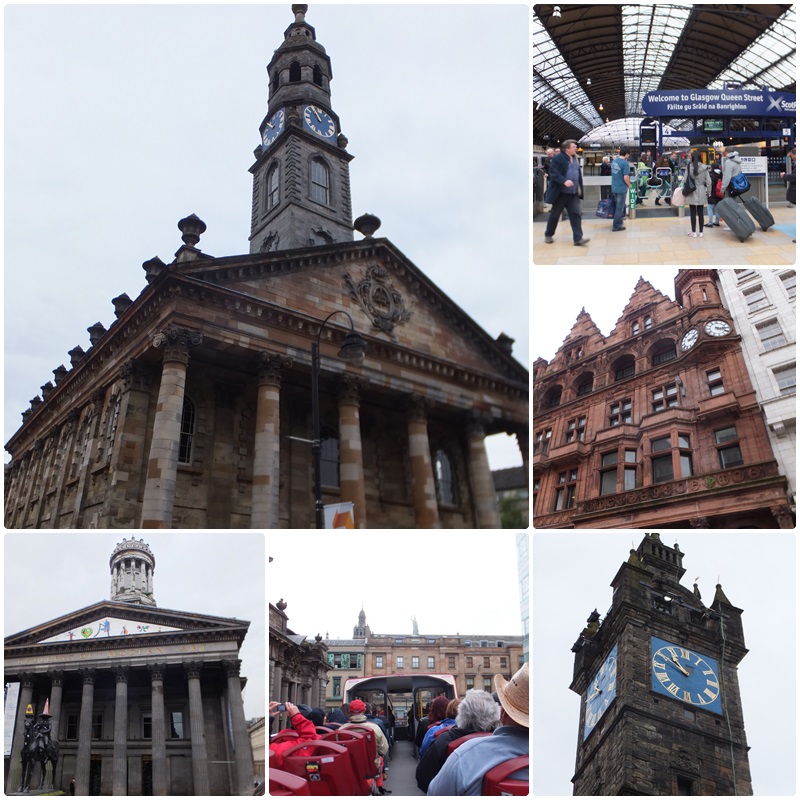 A great way to get to know Glasgow: a double-decker sightseeing tour

I continued my double-decker sightseeing tour of Glasgow and rode past downtown destinations such as George Square, the Glasgow Cathedral, Merchant Square and St. Andrews Square. We then passed by the historic Central Station and crossed the River Clyde to have a look at the Glasgow Science Centre, an ultra-modern science centre that opened in 2001. Back across the river we admired the modern Scottish Exhibition and Conference Centre and the Clyde Auditorium, an iconic building by star architect Sir Norman Foster that is often nicknamed “the armadillo”. These buildings are testament to the recent rejuvenation that Glasgow has been experiencing. 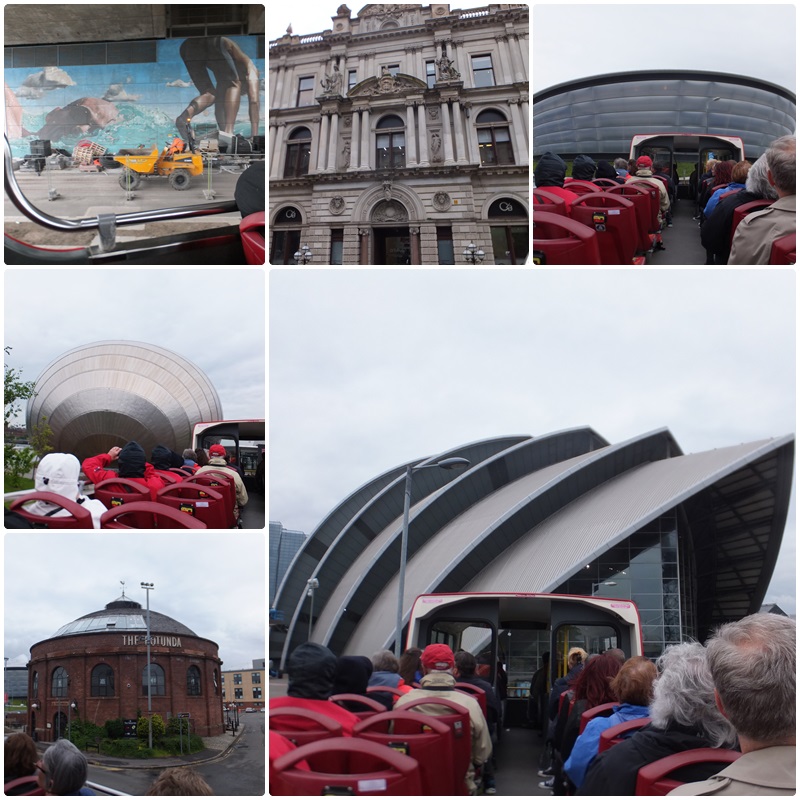 Some of Glasgow’s main sights

We then arrived at the Riverside Museum, a new development for the Glasgow Museum of Transport, where a sign above the entrance greets you with the statement “European Museum of the Year”. And the Riverside Museum is indeed a very cool museum. Completed in 2011, this museum is a very recent addition to Glasgow’s attractions and has become a very popular destination for locals and tourists. This museum is part of a larger regeneration project in the Glasgow Harbour area. 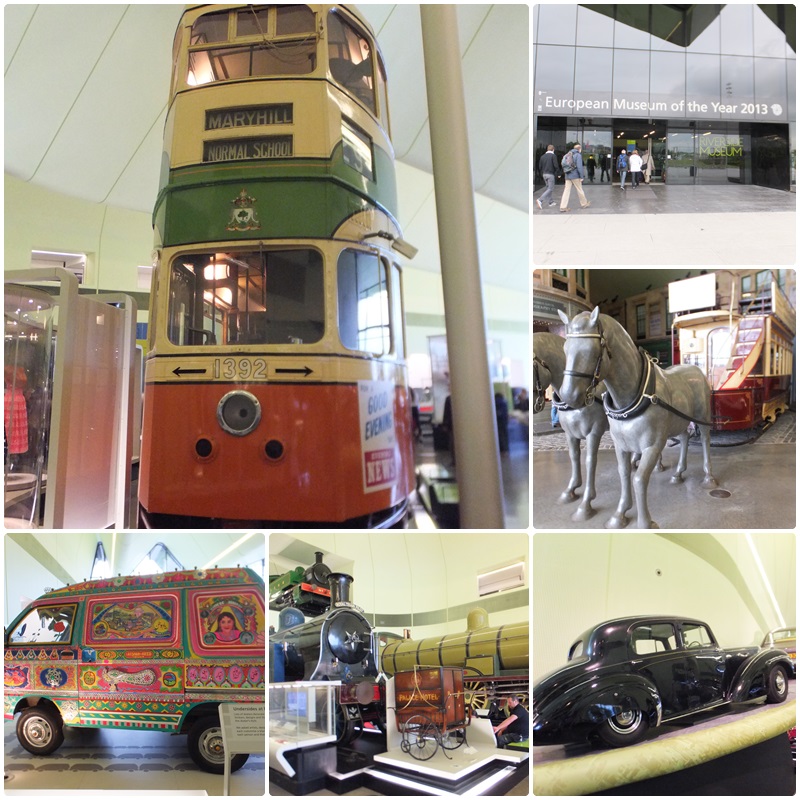 The Riverside Museum is a really cool museum

The Riverside Museum in Glasgow has some outstanding collections of historic vehicles that encompass fine vintage cars, historic trams and locomotives, bicycles, a brightly painted bus and many other one-of-a-kind vehicles. The museum features three interactive streets with access to shops dating from the late 1800s to the 1980s. Themed displays focus on topics such as the River Clyde, Made in Scotland, Transport & Leisure, Crossing the World, Disasters & Crashes and others. I was snapping away with my camera, fascinated by the diverse displays, until it fell out of my hand and broke. The lens was all bent and would no longer retract and it was impossible to take any pictures. Right then I realized I had to go back downtown and see if I could get it fixed or if I had to buy a new one. Unfortunately I had to cut my visit of the Riverside Museum short, but for a travel writer / photographer there was no way of continuing without a functional camera. So the next part of my odyssey was to get back downtown, using Glasgow’s public transit. 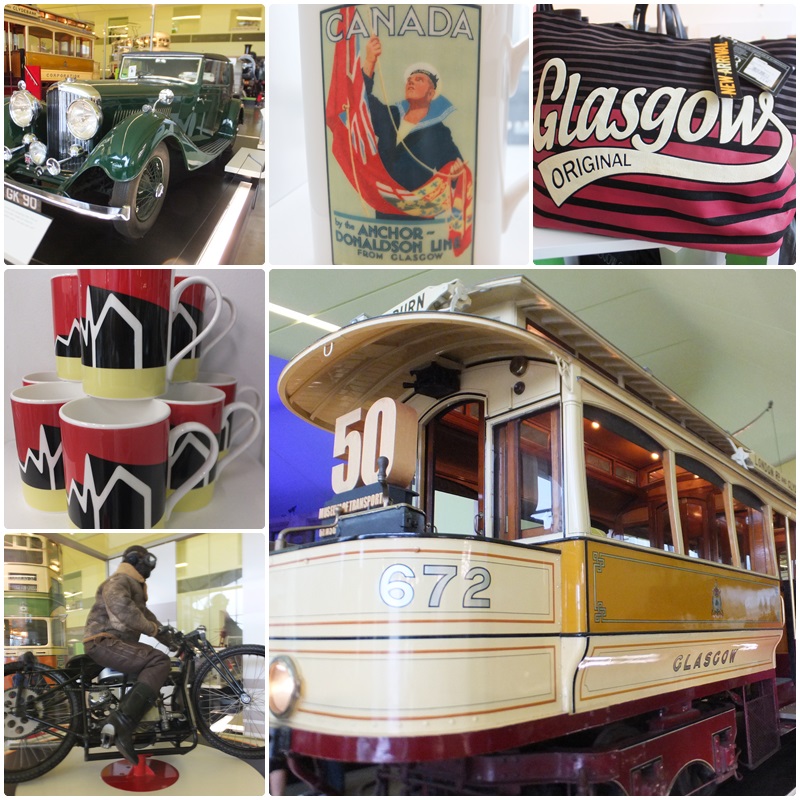 Glasgow’s Riverside Museum: Europe’s Museum of the Year for 2013