Walking south along Broadway I continued my tour of Lower Manhattan until I reached St. Paul’s Chapel. Constructed in 1764, this is the oldest surviving church building in Manhattan and was designated a National Historic Landmark in 1964. With its location right across the street from the twin towers of the World Trade Center, St. Paul’s Chapel played a critical role in the aftermath of the 911 bombings. It became a place where rescue workers could have a rest and seek refuge. Hundreds of volunteers worked here for many months after this tragedy, preparing meals and supporting fire fighters, police, construction workers and other recovery workers. Today, the church houses some touching memorials of this event. Police and firefighters from all over the world have sent patches to express their support. Astoundingly, this church survived the collapse of the Twin Towers without even a single broken window. 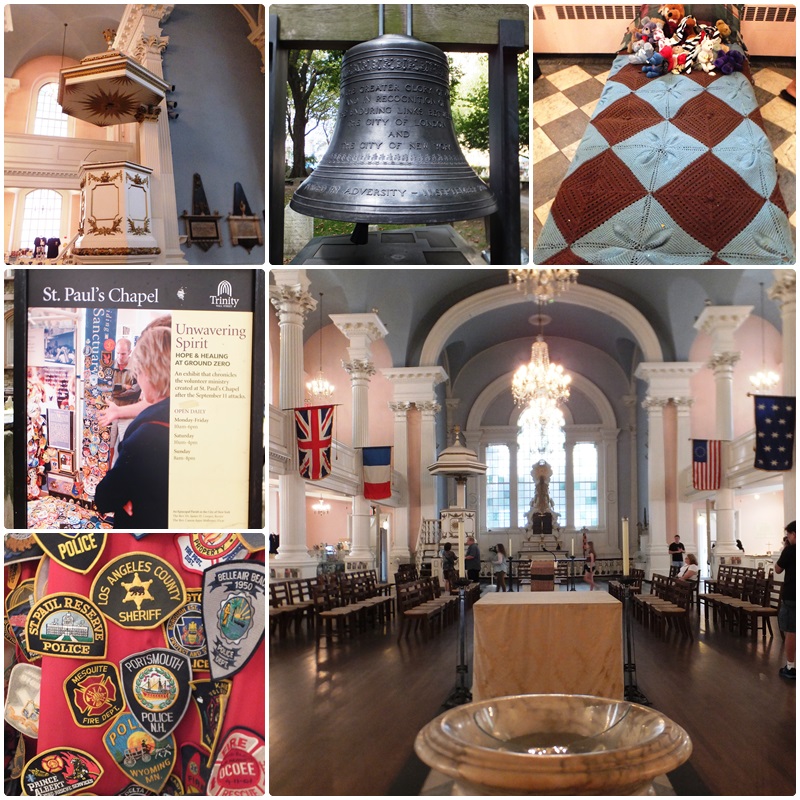 St. Paul’s Chapel in Lower Manhattan, a place of refuge during 911

After visiting the memorials inside St. Paul’s Chapel I stepped outside into the historic churchyard which is located directly across from the Twin Towers once stood. Today, a construction barrier still surrounds the 16 acres (6.5 acre) World Trade Center site. The exterior of the 104 story tall Freedom Tower, whose official name is “One World Trade Centre”, was completed in August of 2012, surpassing the Empire State Building as NYC’s tallest structure. The spire was installed in May of 2013 and has a height of 1776 feet (541 metres), in reference to the year when the United States declared their independence. It will also house the National September 11 Memorial & Museum. 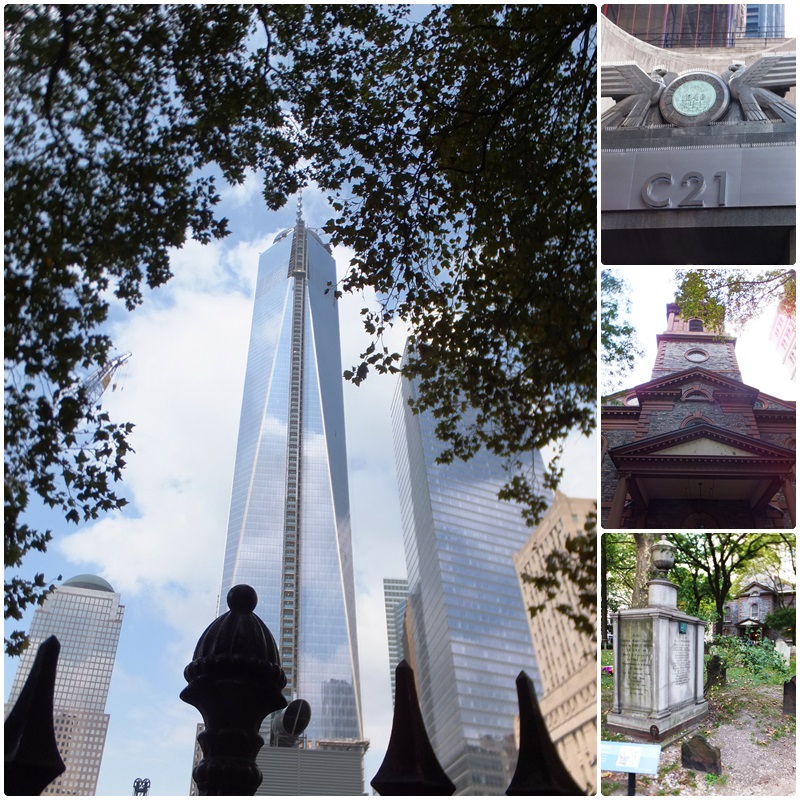 A look at the Freedom Tower

Just a few steps away from the World Trade Center site is Trinity Church, a historic Episcopal parish church that was completed in 1846 – the third Trinity Church in this location. The church is affiliated with three burial grounds and its tower holds 23 bells. The church’s three massive bronze doors were a gift from William Waldorf Astor in 1893. Trinity Church also offered practical and moral support during the 2011 Occupy Wall Street Protest that was held in nearby Zucotti Park. 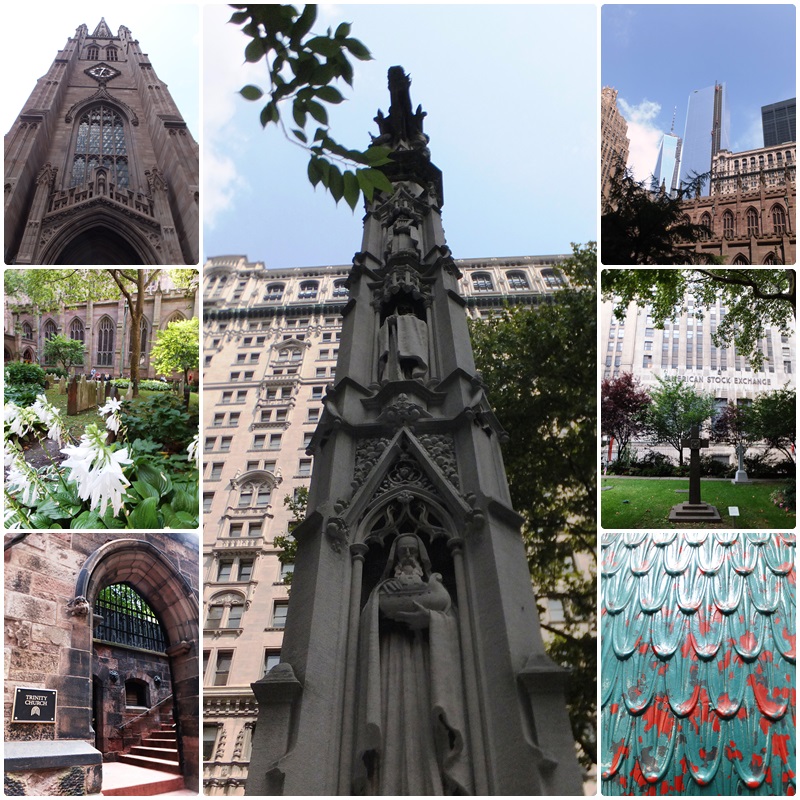 I continued my late August explorations of Lower Manhattan with a walk down to the foot of Broadway and then on Battery Place. Battery Park, at the southern end of Manhattan, is currently under construction and not accessible. Popular attractions in the area include the National Museum of the American Indian, part of the Smithsonian Institution, which showcases the life and culture of Native Americans in the Western Hemisphere. 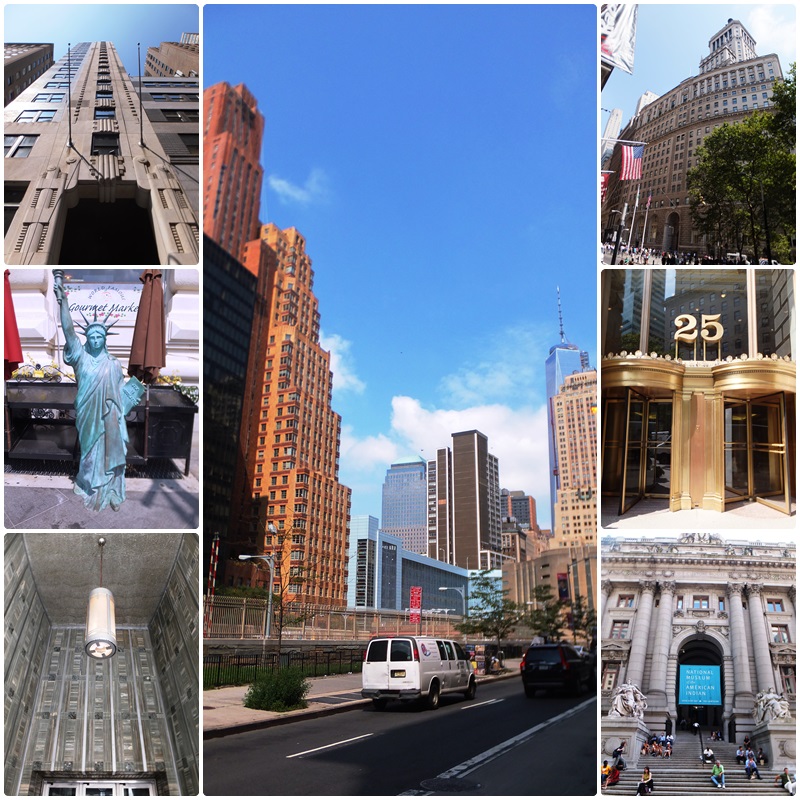 I continued back up north on Broadway past Bowling Green, a lovely triangular park that was originally built in 1733, was full of downtown office workers having their lunch. At the northern tip of the park is the famous “Charging Bull” structure or “Wall Street Bull”, a symbol of capitalist success and wealth in New York City’s Financial District, which is an extremely popular place for people to take photos. Just a bit north I passed by the historic Trinity Church again. 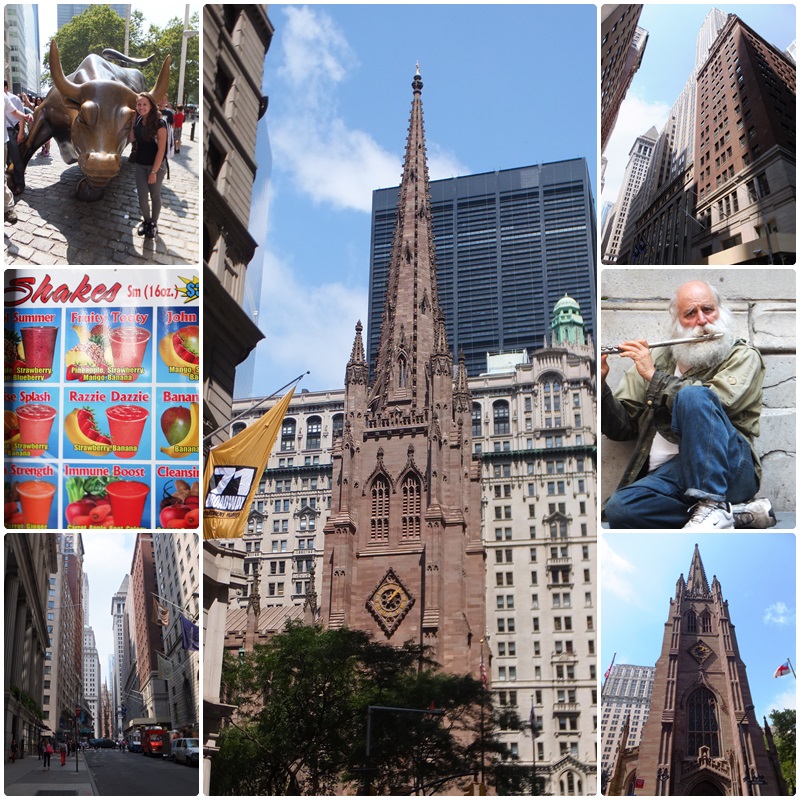 Walking by Bowling Green, past the Charging Bull to Trinity Church

Then I walked along Wall Street, the heart of New York City’s Financial District. It is the location of the New York Stock Exchange, and several other major exchanges are or were located here. There are also several upscale residential developments in this part of Lower Manhattan. Wall Street was originally named by the Dutch settlers in the 1640s in reference of an earthen fortification wall of the Dutch settlement of New Amsterdam. Wall Street had its heyday in the early 20th century and many historic skyscrapers line this iconic street. As a result of the 911 attacks, concrete barriers are strategically placed in the area to prevent vehicular bombings. Today, people sit on these barriers, often sipping fruit smoothies that are sold by food trucks in the area. 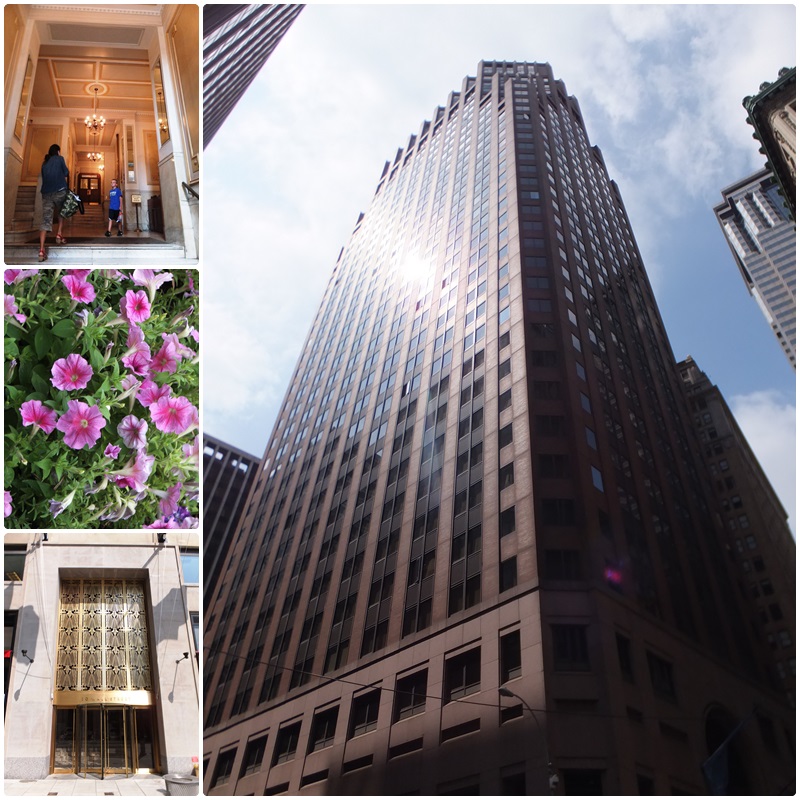 Wall Street – heart of the financial district in Lower Manhattan