Niagara-on-the-Lake is one of the most popular getaway destinations for people from Toronto and the Golden Horseshoe area of Southern Ontario. It is only about an hour and a half away with easy highway driving on the Queen Elizabeth Way.

On January 4, 2013, my friend Linda and I hopped in the car around mid-day and sailed straight through to Niagara-on-the-Lake without any major traffic snags. The weather was a bit overcast and dreary, but there was no snow in sight, so it was easy driving. We arrived in this pretty country town and found a nice parking spot next to Lake Ontario. We walked a couple of blocks past attractive historic homes and arrived on Queen Street, the town’s main thoroughfare.

Queen Street is a lively shopping street with numerous attractive stores, restaurants and cafes, boutiques and galleries, and on summer weekends it is definitely packed with visitors. Today, on this cold winter day, it was a bit quieter with a few people strolling here or there. 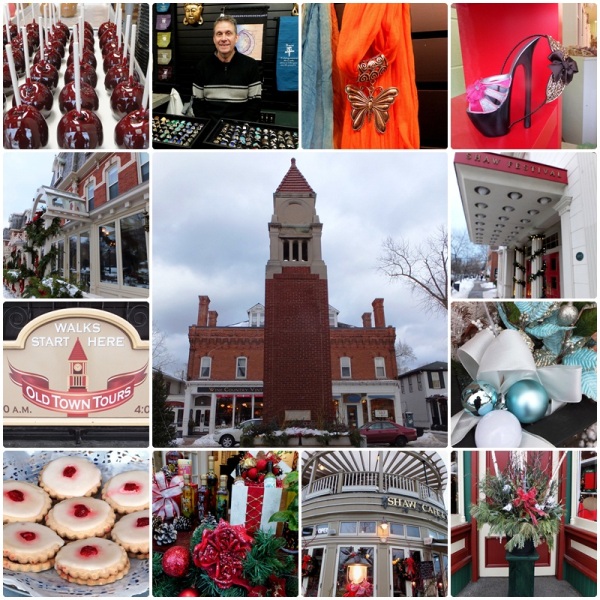 To grab a late lunch we entered into an eatery called “The Epicurean”, a casual café that serves freshly made fare such as sandwiches, salads, quiches, meat pies and lasagnes. We decided that a hot soup was in order and my friend ordered a white bean soup while I settled on the cream of mushroom, both of which were very tasty. In the evening, The Epicurean turns into a bistro that also features an extensive wine list.

Right across the street is the Shaw Festival Theatre, location of one of Canada’s most important theatre festivals. First established in 1962, the Shaw Festival features works by George Bernard Shaw and other playwrights during its annual season which lasts from April to October and has made Niagara-on-the-Lake one of Canada’s most important theatre destination.

We crossed King Street and had a peek inside the Prince of Wales Hotel, a luxurious and treasured landmark hotel in Niagara-on-the-Lake. Then we headed back and dropped in at the Romance Collection Gallery & Gift Shop. This gallery features the exclusive works by artists Trisha Romance and Tanya Jean Peterson, all set within the impressive architecture of a Victorian mansion.

On our way back on Queen Street we made a stop at the Shiny Company where we talked to owner Stuart Constable and admired his assortment of unique gifts from Canada, Bali, Thailand and many other countries. He has been running his business in Niagara-on-the-Lake for about 20 years now. We couldn’t resist picking up a couple of scarves that were adorned with metal pendants that came in the shape of dragonflies, elephants or peacock feathers. Stuart, ever the gracious host, charmed us with his British accent and we thoroughly enjoyed our retail experience.

After we finished our stroll along the Queen Street shopping street we picked up a couple of coffees at Starbucks and embarked on the drive to our final destination for the day: Niagara Falls, Ontario.