The Art Gallery of Ontario is one of Toronto’s foremost arts institutions and attracts hundreds of thousands of visitors every year. It is part of a diverse program of arts and culture that Toronto travel enthusiasts can enjoy throughout the whole year, from live music performances to film festivals to theatre and visual arts.  Founded in 1900 by some private citizens, the Art Gallery of Ontario has evolved into one of the largest galleries in North America.

The AGO is home to a collection of more than 80,000 works and has 45,000 square meters (480,000 square feet) of exhibition space and keeps adding more space regularly. Between 2004 and 2008, the Art Gallery of Ontario underwent a major transformation under the helm of Toronto-born master architect Frank Gehry who, among other things, equipped the building with a new entrance area, a new 4-story south wing, and most noticeably, a new glass and wood façade on Dundas Street which is called “Galleria Italia”, so named by one of the major Italian-Canadian donor families.

The permanent collection of the Art Gallery of Ontario includes the world’s most extensive collection of Canadian art, including famous paintings by Cornelious Krieghoff, Emily Carr, Tom Thomson (one of the museum’s important benefactors) and the Group of Seven. The African and Oceanic art collection is the largest such collection in Canada. The photography collection encompasses more than 40,000 works that cover the entire history of the medium from the 1840s to today. The prints and drawings collection covers works from the 15th century to the present day. 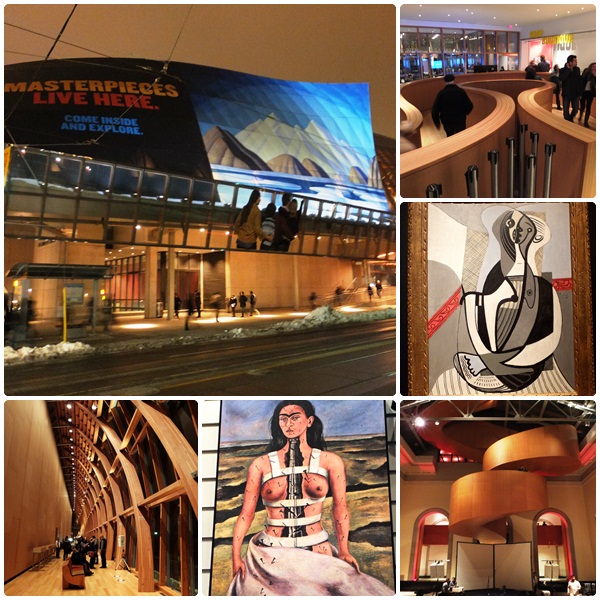 The Art Gallery of Ontario is known for its major exhibitions such as “Voyage into Myth: French Painting from Gauguin to Matisse”, “Catherine the Great: Arts for the Empire – Masterpieces from the Hermitage Museum, Russia”, “Chagall and the Russian Avant-Garde: Masterpieces from the Collection of the Centre Pompidou, Paris” and many more world renowned exhibitions that have taken place at this museum.

The current special exhibition at the AGO is entitled “Frida & Diego: Passion, Politics and Painting”. It has been running since October of 2012 and will end on January 20, 2013. On January 2, 2013 I took my friend Linda, also a huge art fan, to the AGO to see this special exhibition about the most fascinating and controversial artist couple of the 20th century. The museum was absolutely packed with art lovers.

The exhibition showcases more than 80 works by Frida Kahlo and Diego Rivera; more than 60 photographs and some film clips present the life of this enigmatic couple who became famous in the 1920s and 1930s. Diego Rivera became one of the world’s the most well-known political muralists while Frida Kahlo’s intimate and highly personal paintings depict her life-long struggle with emotional and physical pain. Not surprisingly the exhibition is subtitled “He painted for the people. She painted to survive”.

After our visit to the Art Gallery of Ontario, we continued our Toronto travel adventure with a visit of Baldwin Street, just minutes away. Baldwin Village is a historic Victorian-era neighbourhood whose homes have been converted into small arts stores and restaurants. We enjoyed a delicious Vietnamese dinner at Hanoi Bistro and reflected on all the Toronto travel opportunities, in a city that offers a broad smorgasboard of arts and culture throughout the year.