Toronto Travel Escapes: A Country Outing to the Forks of the Credit

The Forks of the Credit is one of the most scenic provincial parks close to Toronto and a great Toronto travel escape idea that is not far from the city. Just about an hour north of Ontario’s metropolis, the Credit River has cut a deep valley into the landscape. In the late 1800s a railway was built through the Credit Valley in order to facilitate transportation of quarried sandstone into the City of Toronto. Some of Toronto’s most treasured buildings, such as Queens Park and Old City Hall, were built with Credit Valley sandstone. The railway stopped running in the 1970s, and today the area is popular with hikers and mountain bikers.

The Niagara Escarpment also runs through the Forks of the Credit Provincial Park. As a designated UNESCO Biosphere, this is a protected nature area with unique fauna and flora that lives around the limestone cliffs of the Niagara Escarpment, a unique geological formation that was created by different rates of erosion of rocks such as harder and softer rocks. Composed primarily of limestone and shale, the Niagara Escarpment features many stunning formations such a gorges, waterfalls and caverns.

In the Forks of the Credit Provincial Park, hikers can enjoy an outing on the Bruce Trail, a hiking trail of almost 900 km (560 miles) that starts in Queenston, Ontario, not far from Niagara Falls, and ends in Tobermory, at the tip of the Bruce Peninsula. 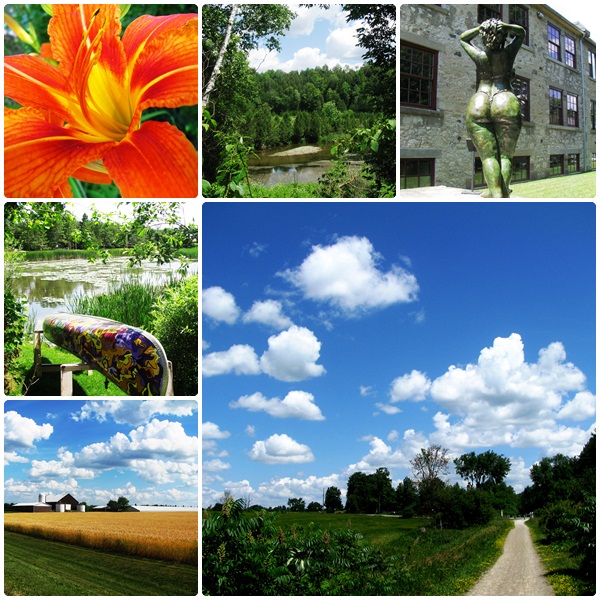 Forks of the Credit area

The Credit River starts near Orangeville, just a bit north of the Forks of the Credit, flows through the Caledon Region and empties into Lake Ontario in Port Credit, Mississauga. It is very popular with fishermen who fish for Chinook salmon and rainbow trout. It is truly a phenomenal habitat, with more than 40 species of mammals, over 60 species of fish and more than 1300 plant species. Many kayakers and canoeists also enjoy this waterway, and parts of it near Cheltenham are also used by locals for river rafting.

There are several scenic villages close to the Forks of the Credit Provincial Park where you can stop for an ice cream or a snack. Caledon is a pretty village that is most well known as the location of the Alton Mill, an artists’ centre housed in a former woolen mill, and the Millcroft Inn, a historic hotel. The scenic village of Belfountain has several country stores and a restaurant, and the village of Cheltenham, one of the oldest villages in Ontario, has a general store that has a backyard with a sitting area for customers that is facing the scenic Credit River.

A day outing to the Forks of the Credit Provincial Park is a great Toronto travel idea that combines an opportunity for physical exercise in scenic surroundings with a visit to some of the historic country villages that dot this pleasant countryside.

The requested album cannot be loaded at this time.