It’s incredible, but every day in San Miguel de Allende was more beautiful than the last. March 7, 2014 was no exception as the sun was shining and not a single cloud was in the sky for the entire day. I started my day with a lovely hot chocolate and 3 churros, the elongated Spanish fried-dough pastry, at San Agustin Chocolates & Churros in downtown San Miguel. This charming café is located in a historic mansion, just steps from the main square. It is owned by the Argentine actress and former Playboy model Margarita Gralia, whose glamorous photos can be seen all over one of the walls. The churros, essentially fried extruded dough drenched in sugar, are an absolutely sinful and addictive treat, and combined with the thick Spanish hot chocolate this was a delicious (if not very healthful) breakfast. And the perfect view out through the open windows of the Baroque Church of San Francisco just adds to the pleasant ambience of Café San Agustin. 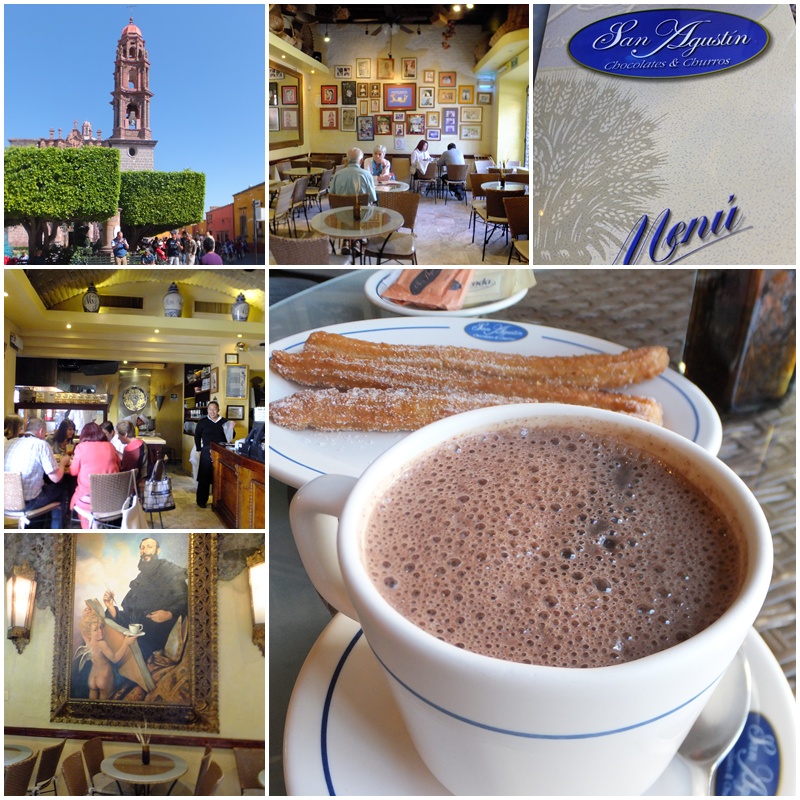 As I was having my breakfast at the Café San Agustin, I saw a group of colourfully dressed dancers and drummers coming down the street. They were part of the “Fiesta del Señor de la Conquista” which is always celebrated on the first Friday of March and is unique to San Miguel de Allende. This boisterous festivity pays homage to Our Lord of the Conquest and actually represents the acceptance of Christ by the indigenous people of Mexico. 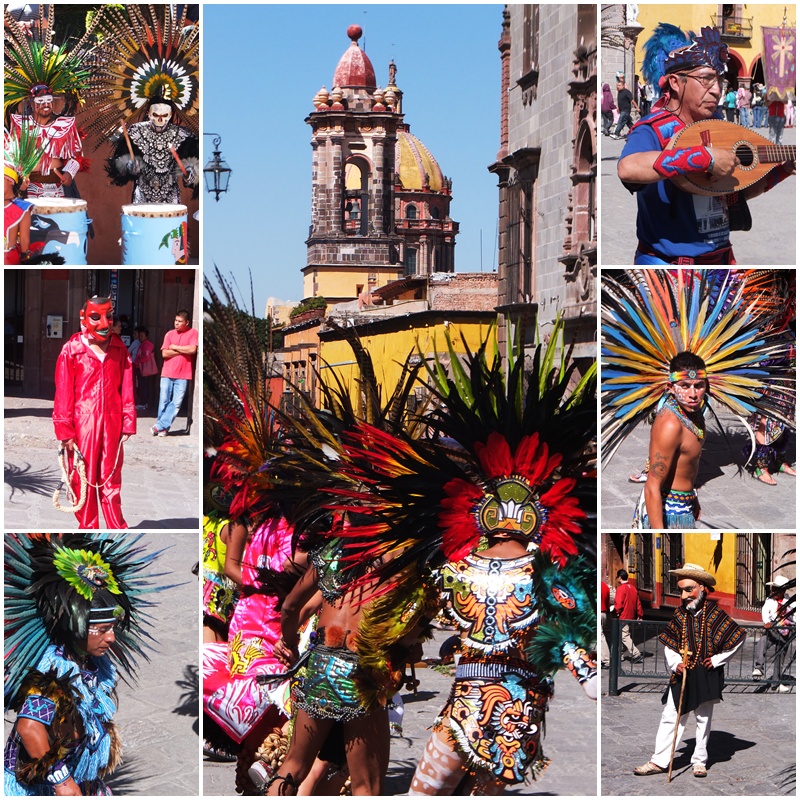 The costumes of the dancers are absolutely stunning; they include dresses with pre-Hispanic patterns and extremely colourful feathered headdresses. Many of the dancers are wearing masks, some of animals, others representing death. Even cowboys and men dressed in drag were part of the procession. All the dancers have chains of small seed pods around their feet which make noise with the rhythmic stomping of the ceaseless dancing. Countless onlookers were mesmerized by this outstanding display of local culture and the cameras were clicking non-stop. The dancers in their colourful outfits and impressive headdresses were going to be dancing to rhythmic drumming throughout the entire day and young women were carrying the statue of Christ, representing “Our Lord of the Conquest”. This festival is unique to San Miguel de Allende and represents a confluence of Christian traditions and indigenous ceremonies. 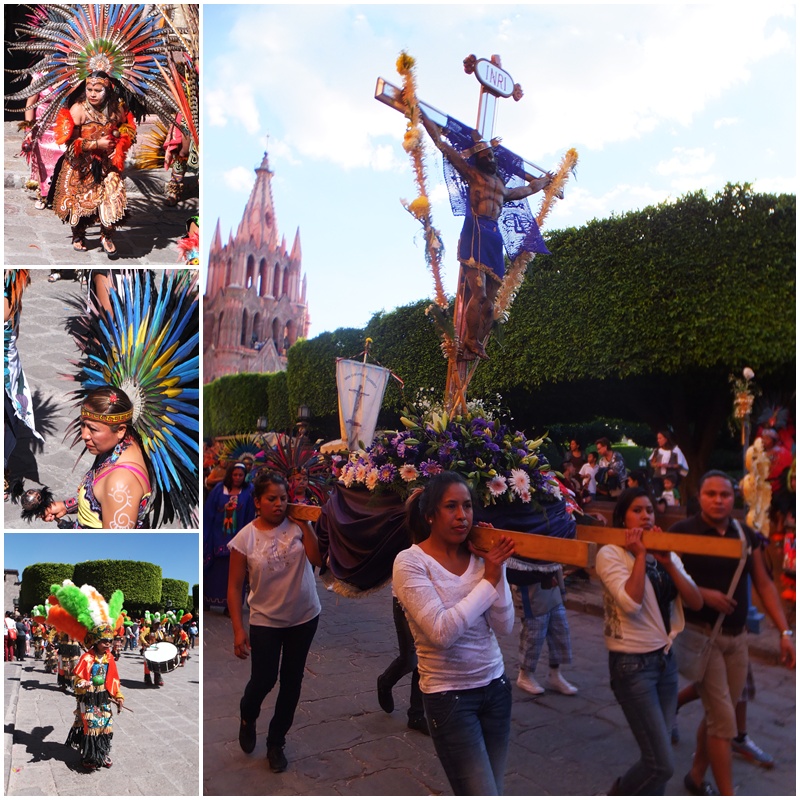 To sample more Mexican cuisine in San Miguel de Allende, I headed to Café Contento for lunch. Located right across from Las Monjas (the Convent of the Immaculate Conception) and the Centro Cultural Ignacio Ramirez – two of San Miguel’s top attractions, Café Contento has an attractive dining room and a cozy outdoor patio in one of the courtyards that are so typical of this colonial city. I had a chance to talk with renowned chef and owner José Bossuet Martínez who received part of his culinary training in Monte Carlo and for many years was the personal chef of the Mexican president Vicente Fox. José cooked for political heavyweights such as President George Bush and his entire senior cabinet including Dick Cheney, Condoleeza Rice and Colin Powell. He also created meals for former UK Prime Minister Tony Blair, former Spanish President José Maria Aznar and former German Chancellor Gerhard Schröder before moving on to other culinary positions in five star hotel properties all over Mexico. Café Contento uses only the freshest local ingredients and serves authentically Mexican soups, crepes, egg dishes and other Mexican specialties. We sat down and to start we had a delicious guacamole with mango and queso ranchero (cheese) to start. My main dish was “enmoladas” – a stuffed tortilla with a dark mole sauce, made with organic cocoa beans from the Yucatan peninsula. José was a little more adventurous and had a portion of grasshoppers from Oaxaca served with a side order of refried beans. Chef José Bossuet refers to his culinary offerings as “Mexican comfort food” and keeps his prices affordable so no dish costs more than about $10. 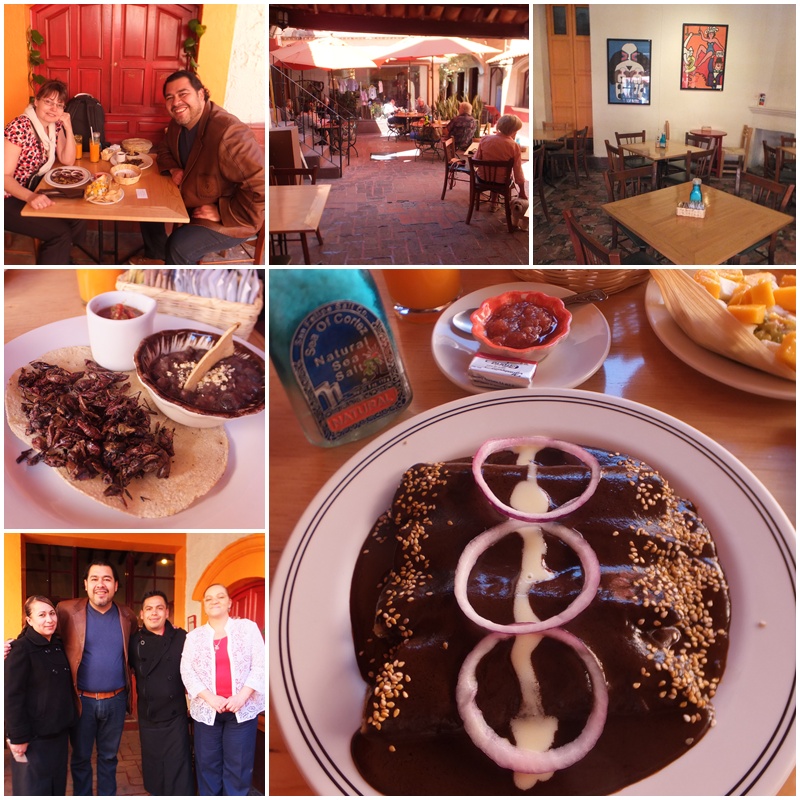 Next on my schedule was an excursion to a vacation and retirement community called Rancho Los Labradores in order to learn more about real estate in San Miguel de Allende.