Zurich Switzerland: Riding on the Dolderbahn, a Visit to the Zürichhorn & the Chinese Garden and a Final Dinner

On my last day in Europe I only had about six hours to explore Zurich, Switzerland. By mid-afternoon I had explored both the east and the west bank of the Limmat River to get an idea of the old part of Zurich. With all this walking and exploring I had worked up a huge appetite. So I took advantage of my transit day pass, took a series of trams across to the eastern side of Lake Zurich. My destination was the Römerhofplatz Square where I had a really delicious lunch at a bakery and restaurant called Le Pain Quotidien. From here I took a rack railway called the “Dolderbahn” up the Dolder mountain. This rack railway has been in operation since 1895 and is covered by the Zurich transit pass. 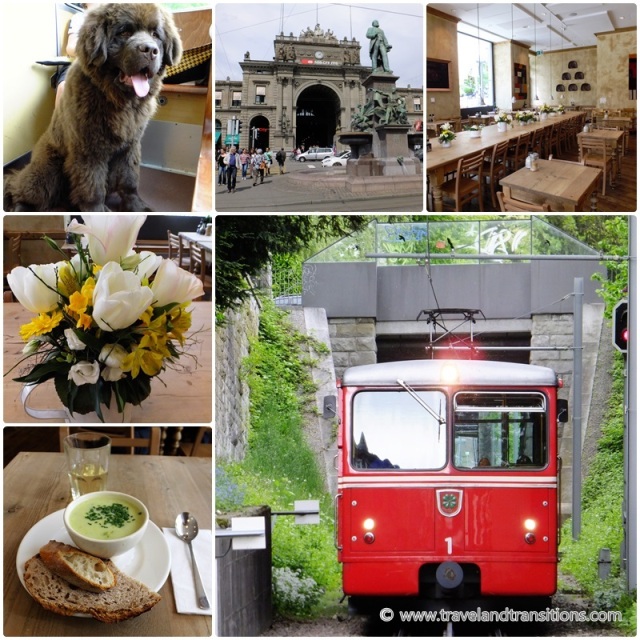 Riding the Dolderbahn in Zurich Switzerland

Less than fifteen minutes later I arrived at the top station of the Dolderbahn and found myself exiting next to the Dolder Grand, a truly grand 5 star luxury hotel at the top of the hill that was first opened in 1899. I walked through the main floor of the hotel which spreads out over 40,000 square metres (more than 430,000 square feet) and admired the fancy sports cars that were  parked in front the hotel. 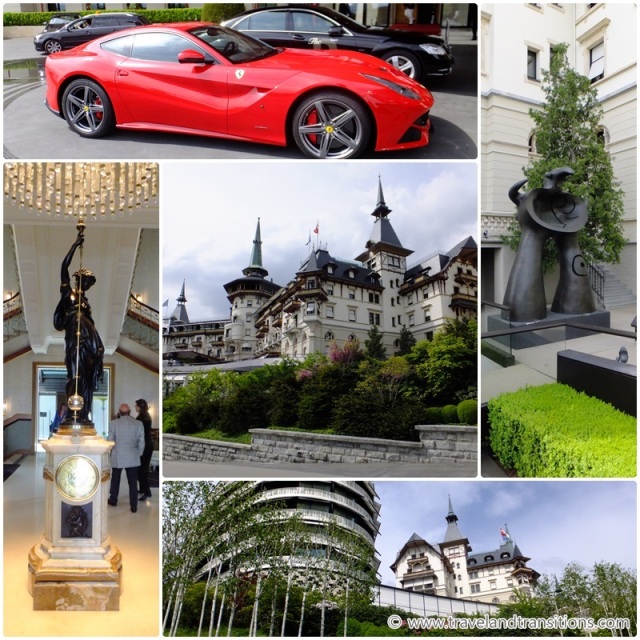 Rather than taking the Dolderbahn back into the city, I walked down the hill and took some pictures of the impressive spacious mansions that flank the slopes of the hill. The Adlisberg hill provides great views of Lake Zurich and is one of Zurich’s most exclusive residential districts. 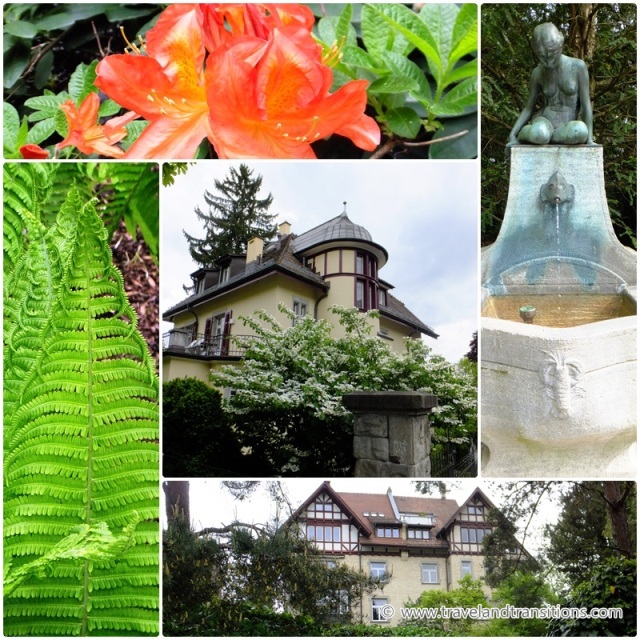 Walking down the Adlisberg hill in Zurich Switzerland

I hopped on the tram again and exited at the Neumünster church which was built from 1836 to 1839. The church, now a protected historic monument, is surrounded by an attractive garden, which replaced the old cemetery that had become too small and was relocated to another location. Interestingly, during and after WWI, vegetables were grown in this park to provide food for the locals, but since 1921 this park has been publicly accessible.

The Neumünster Church in Zurich Switzerland 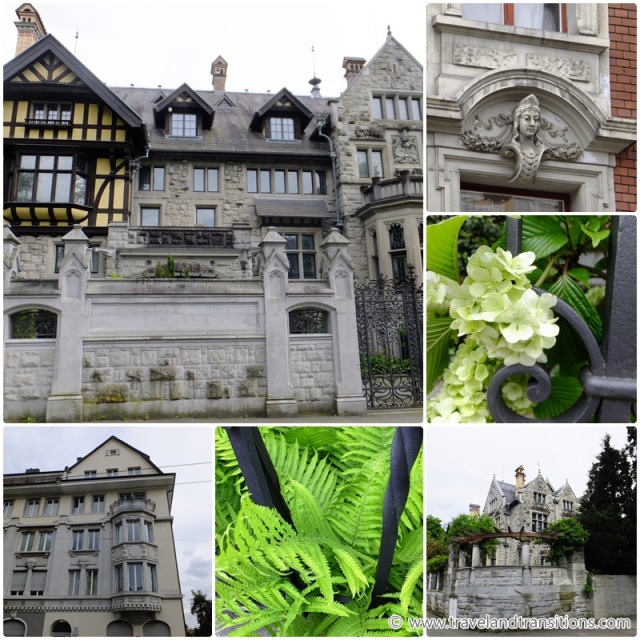 Villas near the shorelines of Lake Zurich

I continued my discoveries at the Zurich waterfront. Part of the Zürichhorn Park is the Chinese Garden, a gift from Zurich’s Chinese partner city Kunming. This rectangular walled garden has a main portal covered by calligraphy, a bridge connecting the pavilion’s island with the inner garden, a large pond, a square pavilion and a water place. It is an extremely popular destination for photography. 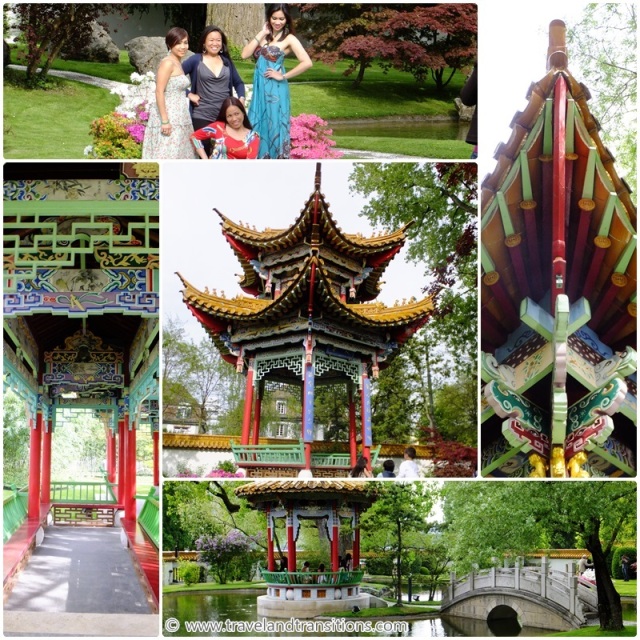 The Chinese Garden in Zurich’s Zürichhorn Park was built in 1993 by Swiss and Chinese garden craftsmen and experts, and it opened the next year. It has amazing details in terms of the calligraphy and paintings; the rooftops are adorned with dragons and various legendary animals. The garden is dedicated to the “three friends of winter”, three plants that survive the cold season: pine, bamboo and plum blossom. The willow trees represent pure water and holiness, and water is the central element. 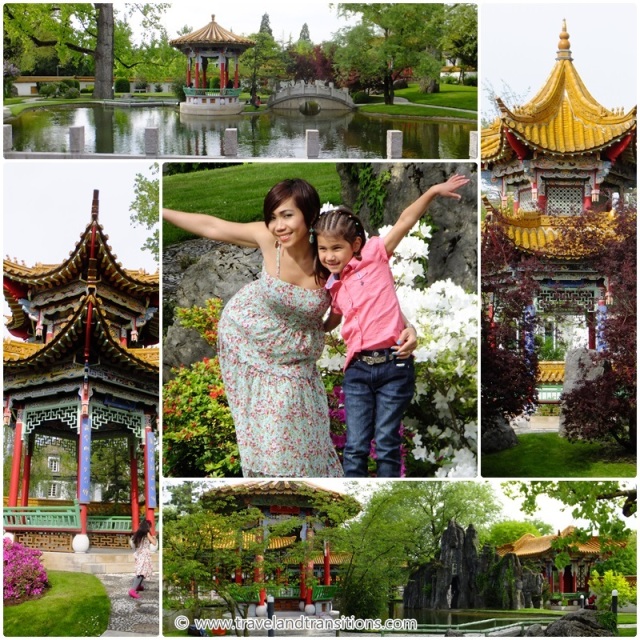 Serenity in the Chinese Garden in Zurich Switzerland

After the Chinese Garden I took a stroll in the manicured gardens of the Zürichhorn. The azaleas and rhododendrons were in full bloom. The waterfront provides a wonderful view of Lake Zurich and the western shoreline of the lake. Spring time is a gorgeous time for exploring Zurich. 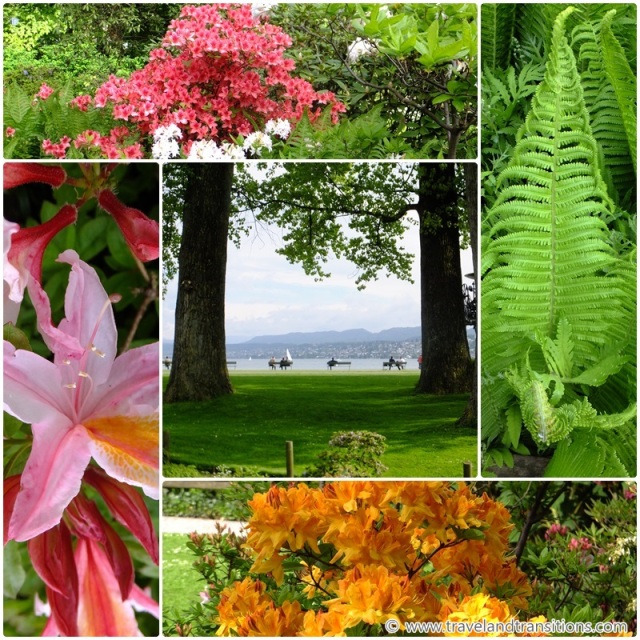 Blooming rhododendrons in the Zürichhorn Park

The Zürichhorn also has a port where sightseeing boats land. The Zürichsee-Schifffahrtsgesellschaft (the Lake Zurich Shipping Corporation) operates passenger boats on the lake and transports about 1.5 million passengers every year. Steam boats have been plying the waters of Lake Zurich since 1834 and today’s fleet still includes two paddle steamers from the early 1900s. 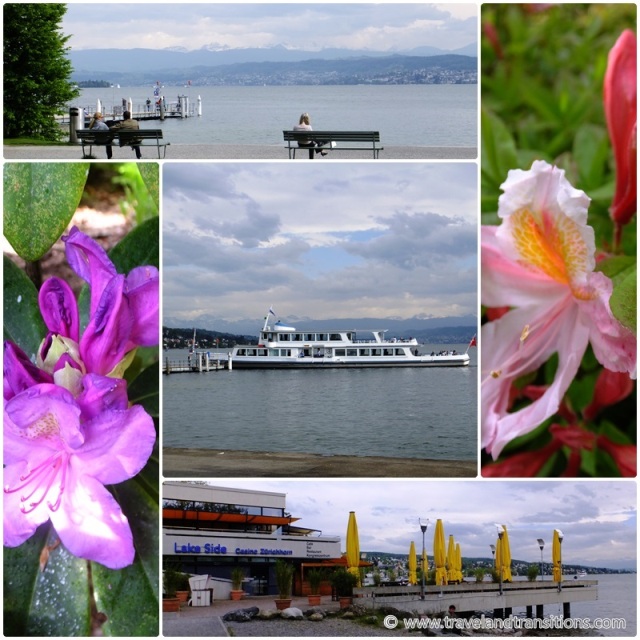 Taking a boat is a great way to explore Zurich Switzerland

After another tram ride, I exited at the “Universität Zürich Zentrum”, the downtown campus of Switzerland’s largest university which has more than 25,000 students. This campus has some impressive buildings including the main building and a gorgeous central atrium called the “Lichthof” which was completed in 1894.

Amazing architecture at the University of Zurich

Finally, my last evening in Europe ended with a great dinner with my host Erna in Zurich. She invited me to join her and her friend Larisa in a delicious dinner that featured smoked salmon – freshly imported from Russia, fresh spring potatoes as well as delicious green and white asparagus. The three of us had a wonderful evening and it was a fitting end for a phenomenal four-week trip through Europe. My time in Southern Italy, Austria and Switzerland had been amazing. 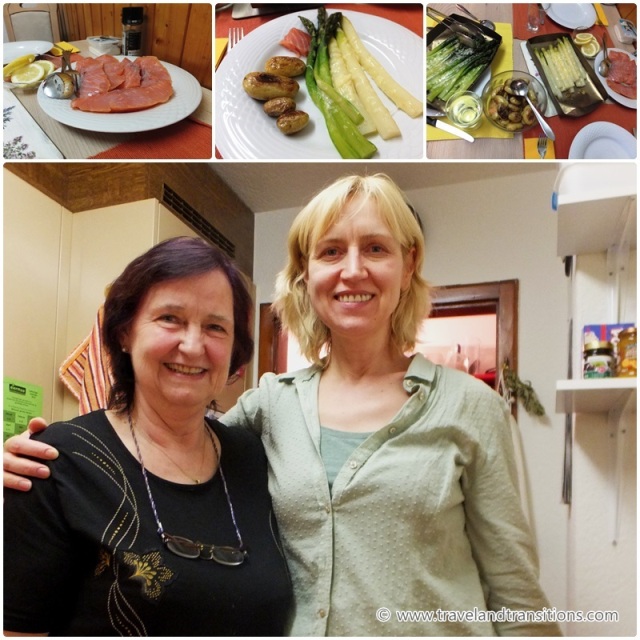 My final dinner in Zurich with Erna and Larisa