With about 35,000 residents, Merano is the second largest town in the Italian region of South Tyrol . Today, slight more than 50% of the population still speaks German, attesting to the fact that this region of Italy used to be part of the Austro-Hungarian Empire until 1918. During the Habsburg reign, from about 1830 onwards, Merano developed into a popular resort town that was visited by family members of the Austrian emperor as well as by members of other European aristocratic families. Famous Austrian Empress Sissi actually spent much time in this picturesque town, and a statue of her adorns the entrance to one of the town’s main parks.

One of the reasons why Merano is so popular is its stunning location among the South Tyrolean mountains. With an altitude of more than 3,300 metres, the mountains of the Texel Group protect the town against cold air from the north, and the south-sloping location provides the town with plenty of sunshine hours through the year. The Mediterranean climate is fabulously suited to the growing of wine, and southern plants such as palm trees, cypresses, laurel and holly oak thrive in this mild environment. 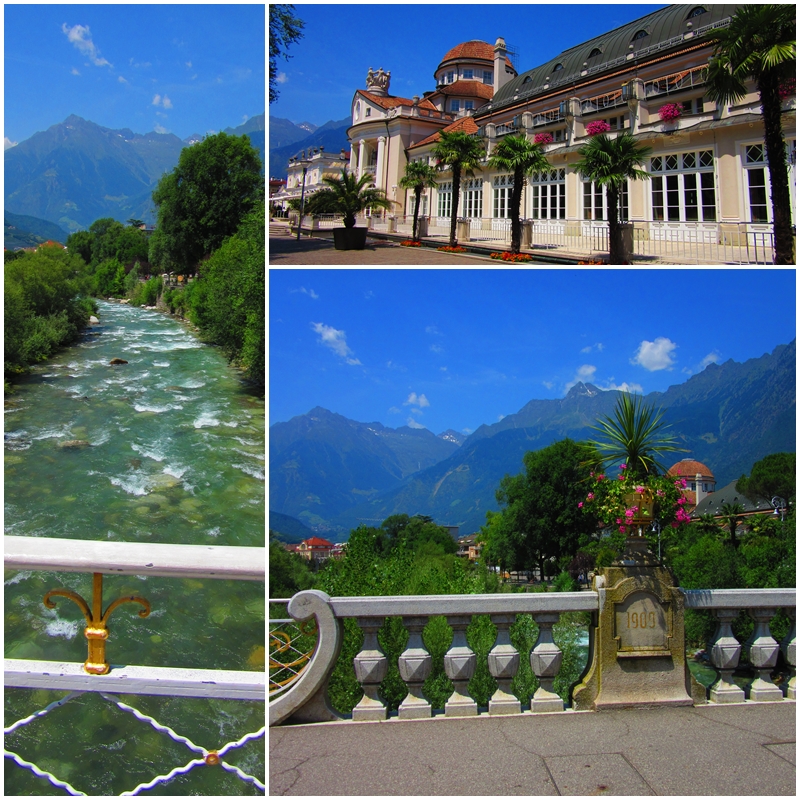 Two rivers come together in Merano – the Passer River and the Etsch River, which continue their journey southwards towards Bolzano, the capital of South Tyrol. A lovely waterfront promenade called the Passegiatta Lungo Passirio is the location of some of the most important historic spa facilities such as the Kurhaus Meran, a popular spa resort complex that was frequently visited by Empress Elisabeth of Austria. Originally constructed in 1874, the newer wing was built between 1912 and 194 and represents a fabulous example of Viennese Art Nouveau.

The historic centre of Merano is much older and many of the townhouses in the centre data back as far as the 13th century. The town is known as a popular shopping destination, and many shops, boutiques and restaurants are located behind the arcaded walkways of medieval townhouses. One of the most iconic structures in Merano is the Main Parish Church, a Gothic church that was built between 1302 AD and the 18th century. Its bell tower reaches a height of 83 metres and is one of the highest in all of South Tyrol. Merano has several medieval city gates – the Vinschgauer Tor, the Passeirer Tor and the Bozener Tor. Part of the medieval fortifications is the Orteinstein tower, which is popular called the “Pulverturm” (“gunpowder tower”). Surrounding the town are about 50 medieval castles, so history buffs will definitely enjoy a visit. 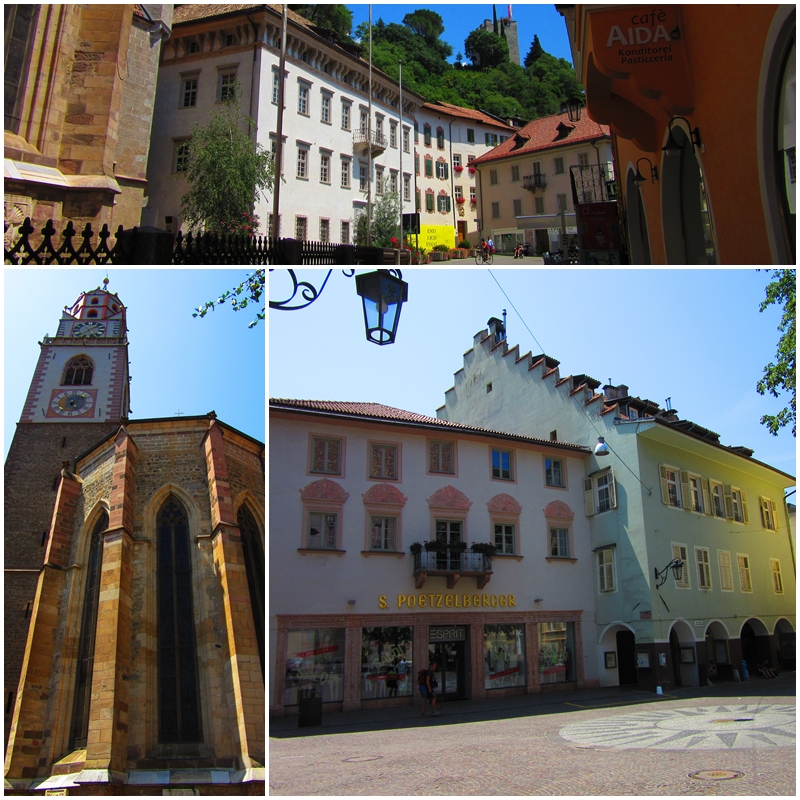 On the southern and eastern side of the Passer River is another walkway called the Summer Promenade and at the entrance of Empress Elisabeth Park you can find a statue of famous Austrian empress who visited Merano four times, the last time one year before year until death due to an assassination in Geneva in 1898. Several grand hotels line the banks of the Passer River and many of the hotels are renowned for the health and wellness offerings, maintaining the tradition of this health spa town.

Trautmannsdorf Castle is one of the main attractions of Merano; it is home to the Touriseum tourism museum as well as to gardens that feature more than 80 different garden environments. On the north side above town is the Tappeiner Promenade, a 6 kilometre long walkway on the flanks of the hill above Merano that provides incredible views of the surrounding mountains and the south-facing valley. Mediterranean trees and shrubs line this promenade, and along the way, benches invite visitors to sit down and enjoy the serene vistas. This promenade was financed by Dr. Franz Tappeiner, a local physician, botanist and anthropologist who practiced as a doctor in town after 1848. The fragrant plants are signposted, making this walkway a nature education trail. 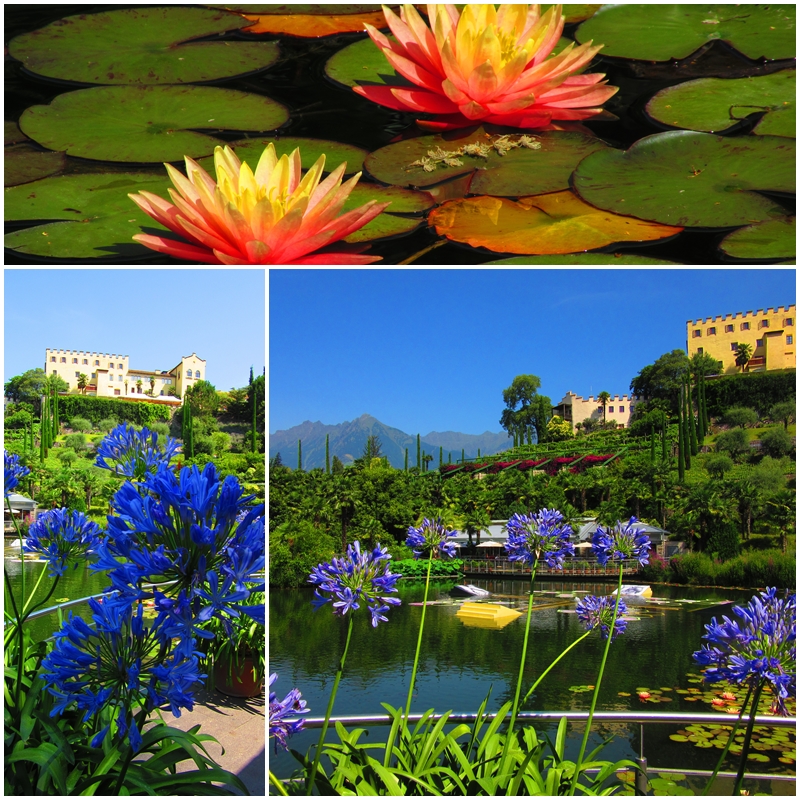 Trautmannsdorf Castle features some of Italy’s most beautiful gardens

Merano features many restaurants and cafes, and during the warm season, visitors can enjoy sitting on the patios of many eateries. Several museums are also located in Merano, such as the City Museum, the Princely Castle Museum, the Jewish Museum, and the Women’s Museum Evelyn Ortner . The Meran Art City Gallery hosts exhibitions of contemporary art, literature and architecture and can be accessed free of charge.

Throughout the year, many special events dot the social calendar in Merano. The South Tyrolean Music Festival focuses on symphonic music from the Classical and Romantic eras. The Meran Jazz Festival has been held here since 1997 and showcases American and Italian jazz musicians and ensembles. A street art festival called Asfaltart has been held here since 2006 and is visited by about 25,000 people every year. Merano also has one of the most beautiful Christmas markets in Italy.

Regardless of what time of the year you visit, Merano will enchant you with its beautiful scenery and historic charm.