Bratislava has a very compact historic centre while the outskirts of the city are characterized by a large agglomeration of Communist-era buildings. Having explored downtown and Bratislava Castle in our cute red miniature fire truck we arrived back Hviezdoslavovo Square and were now ready to discover the city on foot. We strolled past the many shops and restaurants on Rybarska brana (Rybarska Street) and arrived on the main square of Bratislava – Hlavne namestie. Bratislava’s Old Town is the well-preserved medieval core of the city and is home to some of the most important sights of the city. Bratislava Town Hall, the oldest town hall in all of Slovakia, presides over the lovely main square and has a tower that was built around 1370. The Roland Fountain in the heart of the square was constructed in 1572 to provide a public water supply for the residents of Bratislava and today is one of the favourite meeting points in the Slovak capital. 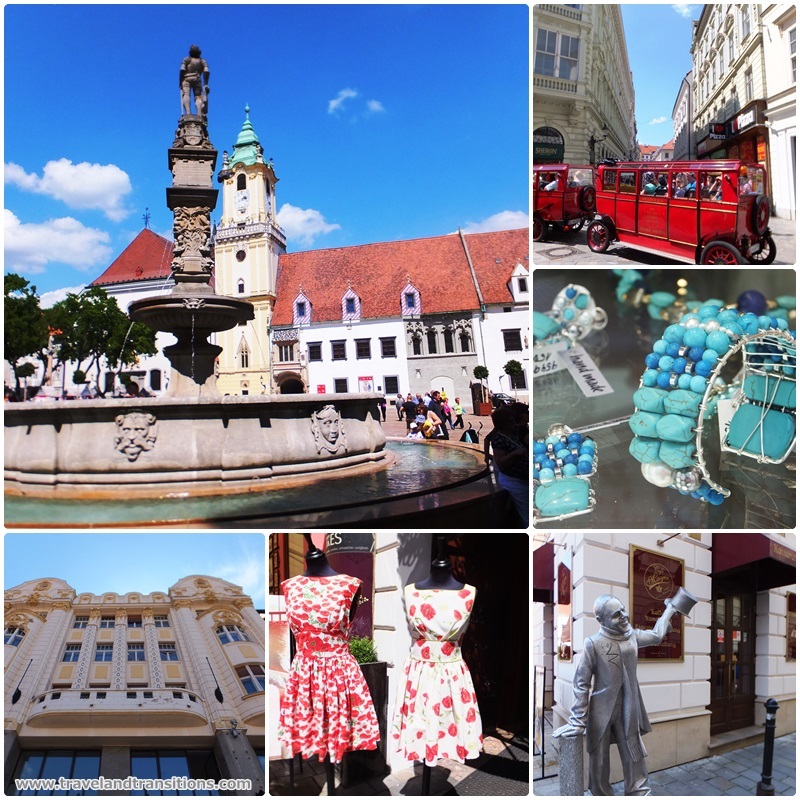 The beautiful main square of Bratislava and the surrounding shopping streets

Continuing our stroll from the main square of Bratislava, we walked on Sedlarska Street and turned right on Michalska Street, both of which are lined with many fashionable boutiques and restaurants that display their Slovak specialties on big colourful signs with pictures and prices for each individual dish. This is very handy because most of the images don’t provide English translations. Traditional Slovak dishes include Halušky, dumplings that are often eaten with hearty meat stews. Lokše are potato pancakes that come with sweet or savoury toppings. Kapustnica is a soup made from sauerkraut and sausage while another hearty dish are Pirohy, the Slovak equivalent of pierogies, dumplings with cheese and potato filling, topped with fried onions. Slovak dishes use ingredients that were suitable for the country’s hot summers and cold winters, such as wheat, potatos, milk products, sauerkraut and onion. Pork is the most popular meat in Slovakia, followed by beef, poultry, lamb and goat. 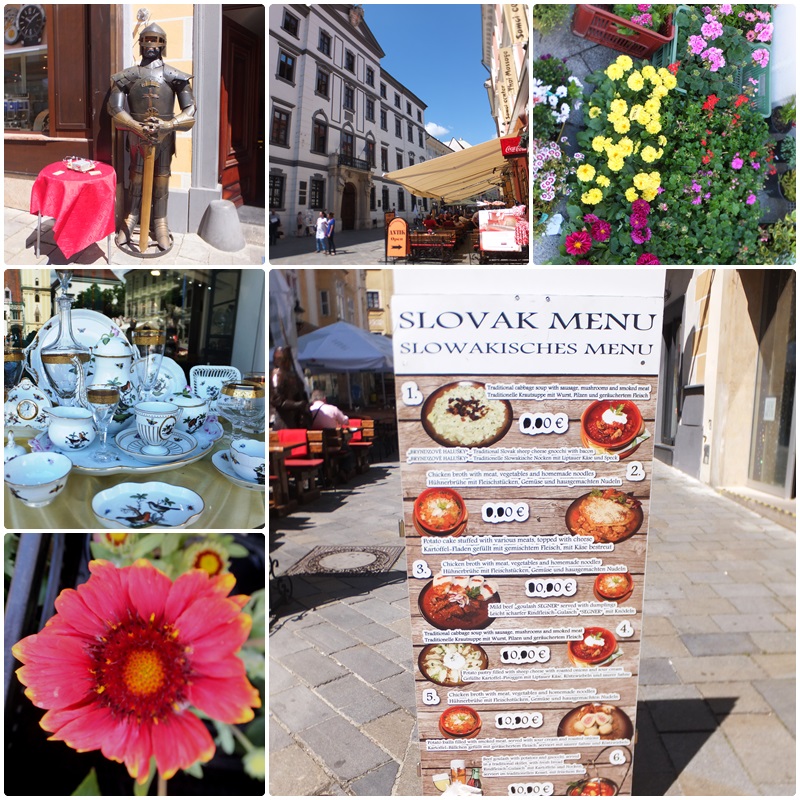 Towards the top of Michalska Street is one of the main sights of Bratislava – Michael’s Gate. Built around 1300 AD, this is the only preserved medieval gate to the city and it was extensively renovated during the Baroque era in the late 1750s when a statue of St. Michael and the Dragon were placed at the top of the tower. Today, the tower is part of the Bratislava City Museum and home to an exhibition of historical weapons. During medieval times, Bratislava was heavily fortified and protected by four gates, two walls encircling the city, two bastions, a barbican (fortified gateway) and even a draw bridge over a moat. Today, the area around Michael’s Gate no longer serves defensive purposes but is home to many luxury shops such as Versace, Gucci, Christian Dior, Prada and others more. 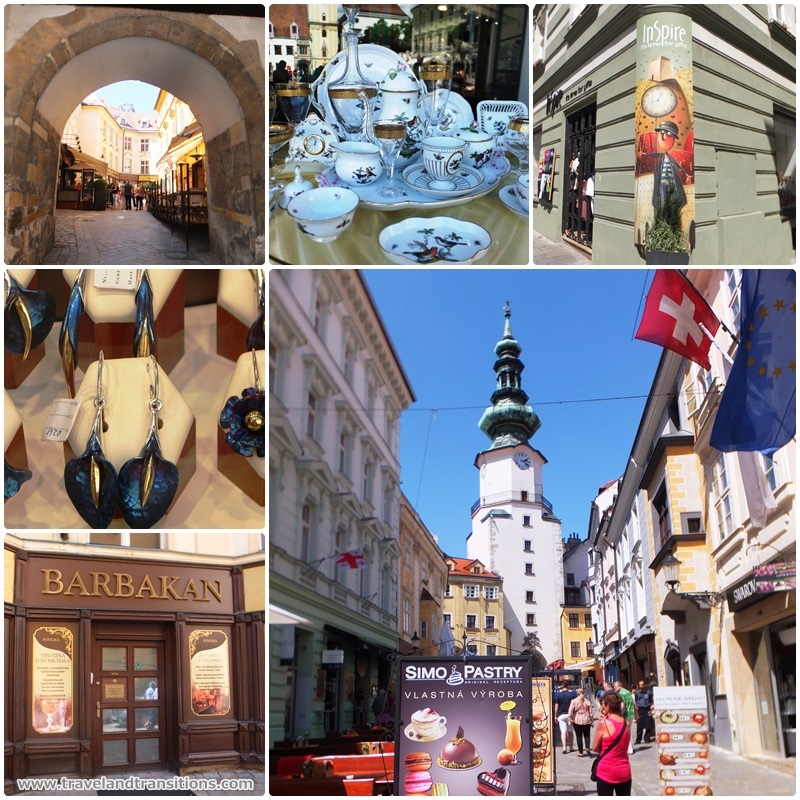 Walking towards St. Michael’s Gate, past many restaurants and shops

From the medieval Michael’s Gate we walked up the hill past the Trinitarian Church, an outstanding example of Baroque in Bratislava’s Old Town. On various cobble-stoned streets we then reached St. Martin’s Cathedral, a late Gothic church that was consecrated in 1452 AD, one of the Slovak capital’s oldest churches. It was the location of the coronation ceremonies of the Kingdom of Hungary between 1563 and 1830 and in total, 11 kings and queens and eight of their consorts were crowned here. 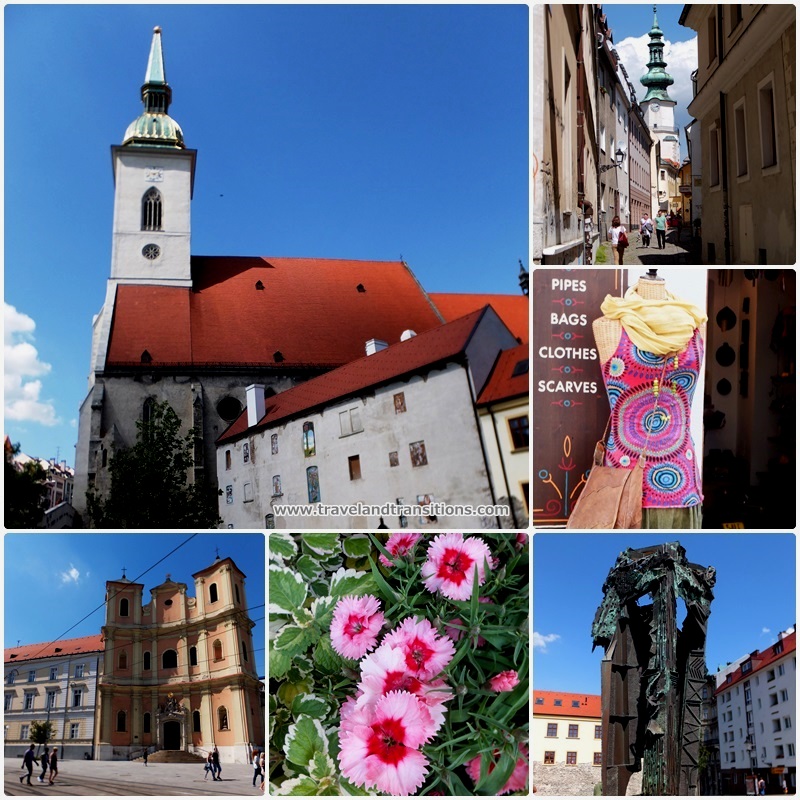 Bratislava has many historic churches, including the Cathedral of Bratislava

The area just east of Bratislava’s St. Martin’s Cathedral is full of shops, boutiques and restaurants. Easily the most popular attractions in this area is a bronze sculpture called “Cumil” (The Watcher). This helmet-clad man of metal is peeking out of a manhole cover and has received his own traffic sign, warning passers-by of the “man at work”. Old Town Bratislava is home to a variety of quirky statues. 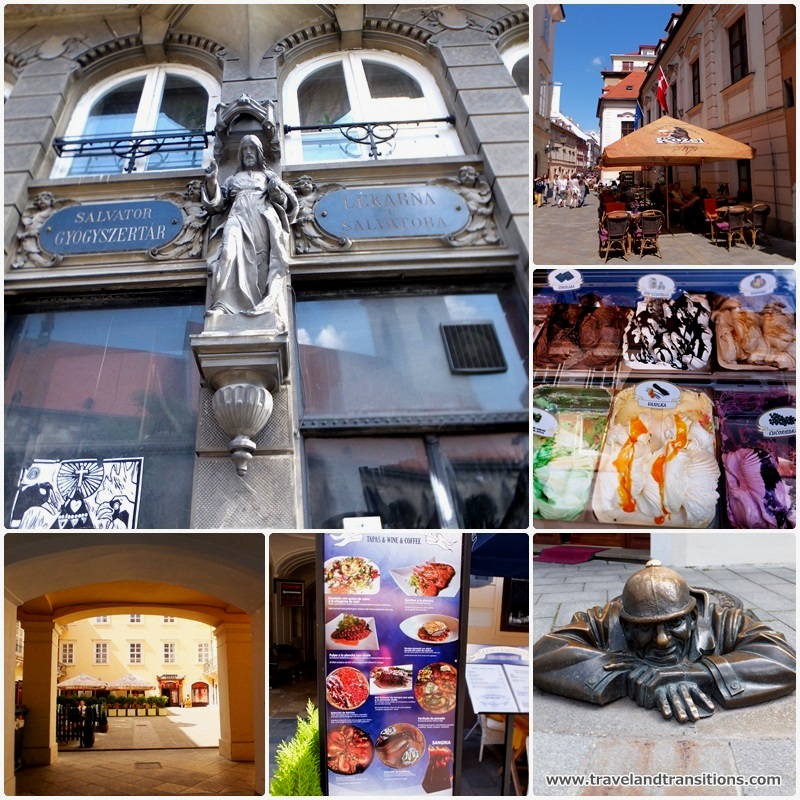