March 13 was our third day at the BNP Parisbas Open in Indian Wells, and it was a great day for some outstanding tennis. We ended up watching tennis celebrities such as Alexander Dolgopolov, Canadian favourites Frank Dancevic and Milos Raonic, Donald Young, world number 2 Simona Halep, Sloan Stevens, Angelique Kerber, as well as an exciting doubles match featuring Stanislas Wawrinka, who we watched from about 2 metres behind the sideline. And I got a picture taken of me with my favourite tennis umpire, Mohammed Lahyani, who is a real crowd favourite with his charm and distinctive way of announcing the scores. Any tennis fan will appreciate the quality of the matches and the proximity to top tennis players that one can enjoy at this tournament. It was an all around great day at Indian Wells. 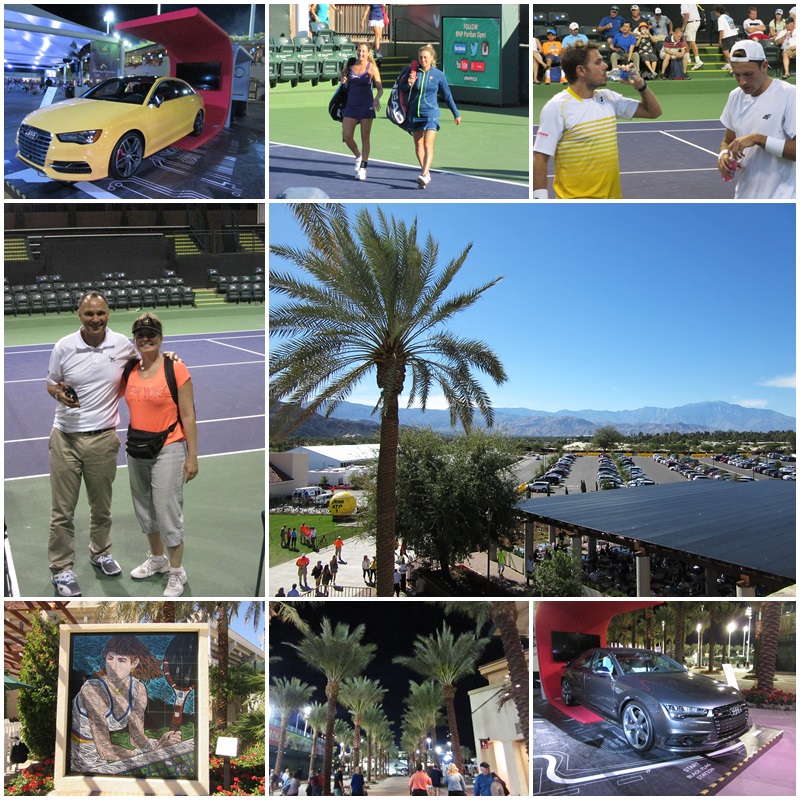 One of the best tennis tournaments in the world: the BNP Parisbas Open

The next day we headed westwards towards Los Angeles where we were going to spend our last two days in California. We had enjoyed a nice week in the Coachella Valley that included some world-class tennis watching. Along the way we stopped at the Desert Hills Premium Outlets in Cabazon. One thing is for sure – Californians know how to build shopping malls. The Spanish-inspired architectural style and the various cafes and kiosks make this shopping centre a nice place to hang out, even if you are not a shopaholic. 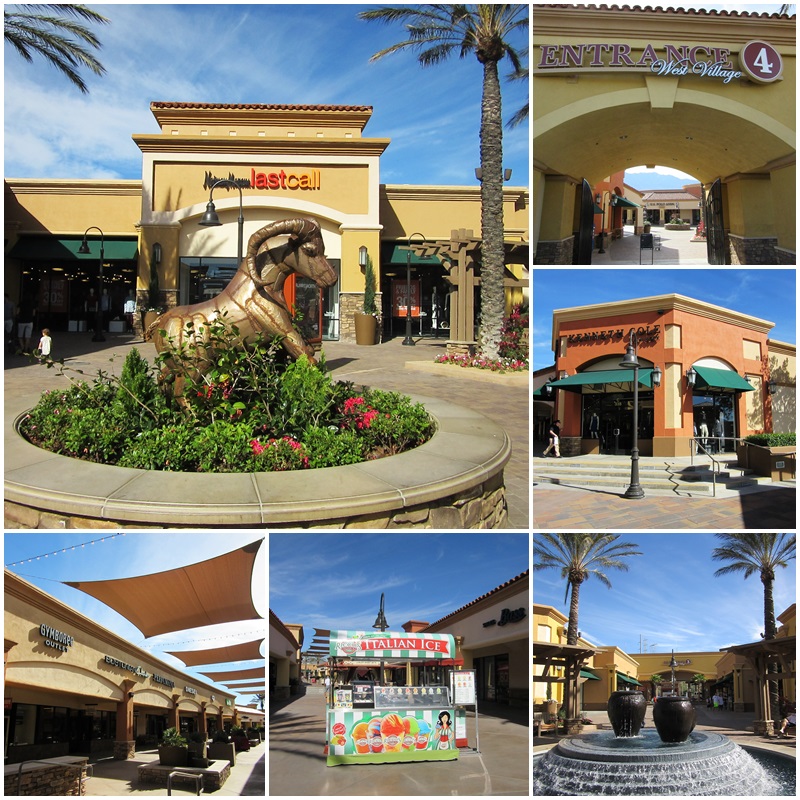 The Desert Hills Premium Outlet in Cabazon, California, has 180 outlet stores that include renowned brands such as Armani, Dolce & Gabbana, Gucci, Neiman Marcus, Polo Ralph Lauren, Versace and other designers. In addition to fashion and footwear, the shopping centre is home to stores that sell leather and luggage, jewellery, gifts and home furnishings as well as several cafes, bakeries, restaurants and coffee shops. It makes for a nice stop between the Coachella Valley and Los Angeles. 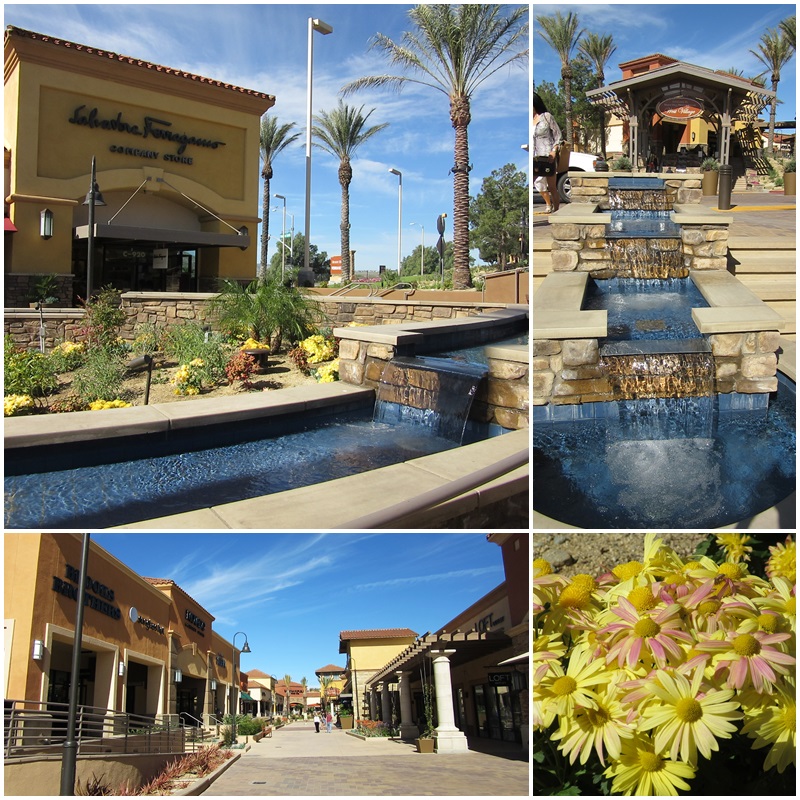 I am not really much of a shopper but I was taken by the attractive design of the common areas of the Desert Hills Premium Outlets. The landscaping, flowers and fountains create a very pleasant environment while benches and chairs invite visitors to sit down and do some people watching. 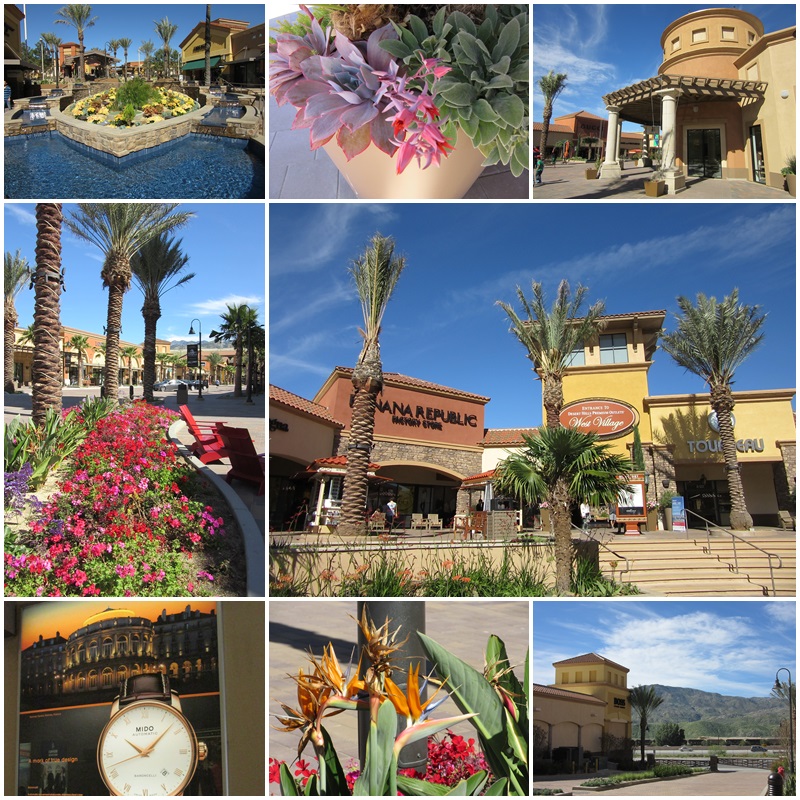 180 different stores are located at the Desert Hills Premium Outlets