The Town of Catskill is Full of Cats

During our explorations of the Hudson Valley we made a stop at Catskill Point, located in the town of the same name at the confluence of Catskill Creek and the Hudson River. This historic area is composed of an attractive public park with a great view of the Hudson River. The park is anchored by the historic 19th century Freightmasters Building, which houses a maritime museum, and the Historic Warehouse. The Hudson Valley was explored in the early 17th century by Henry Hudson and the town of Catskill itself became an early centre of tourism in the early 19th century. Next to this historic park is a nice riverfront restaurant, appropriately named “Catskill Point Restaurant” which boasts a nice large patio overlooking Catskill Creek for waterfront dining. 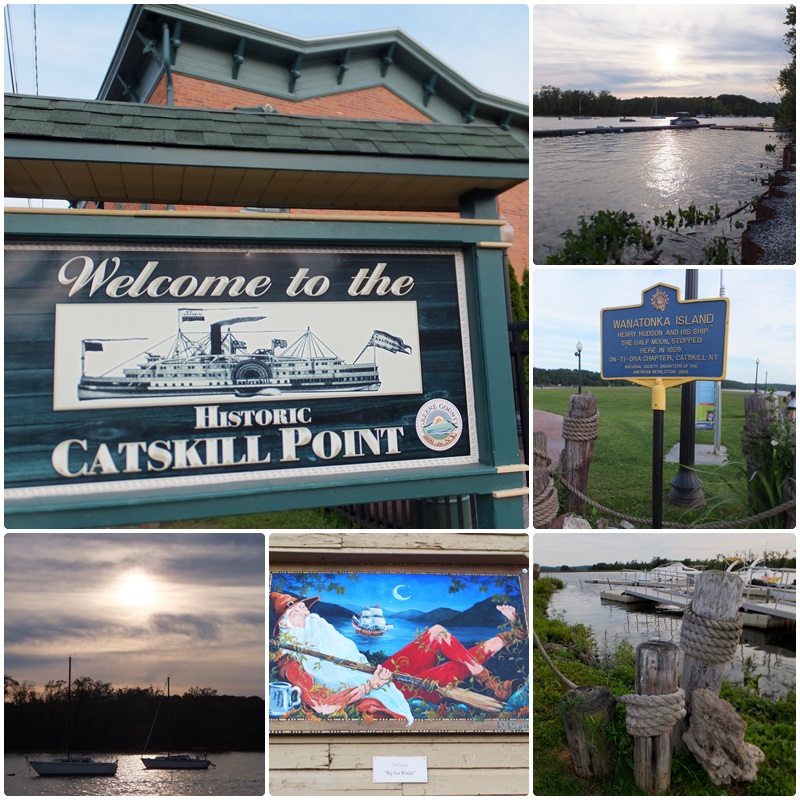 Then we continued our explorations of downtown Catskill on Main Street. The main thoroughfare of Catskill has many impressive historic buildings, some of which date back as far as the late 1700s. The historic structures include the Bank of Green County – an Art Deco bank building from the 1930s, the 19th century First Dutch Reformed Church, the imposing 1908 Green County Court House and an 1875 brick church that today has become a fitness centre. 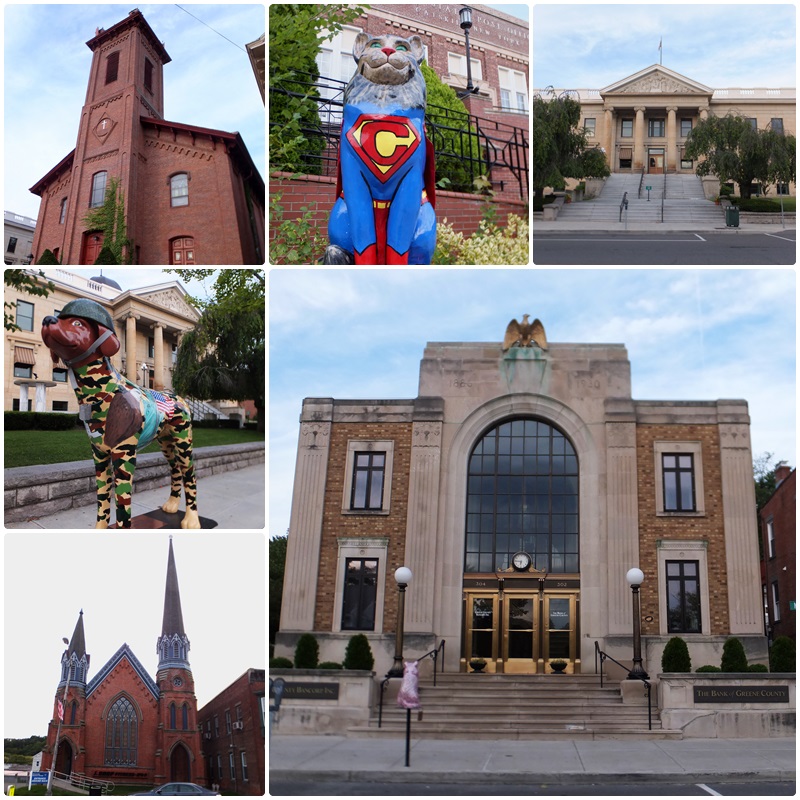 Downtown Catskill has many historic buildings

The section north of Bridge Street in Catskill also has many architectural treasures, such as the Firehouse Tavern that was built before 1870, the Community Theatre – built in 1920 after fire had destroyed an earlier theatre in 1917, and even some buildings dating back to the late 1700s. There are various restaurants and a wide range of retail stores which have successfully survived the construction of big-box stores on the outskirts of town. Most of the buildings are from the Victorian era and the street is spiced up by the various artistically painted cats and dogs that are part of the the “Cat’n Around Catskills 2013 Celebration”. 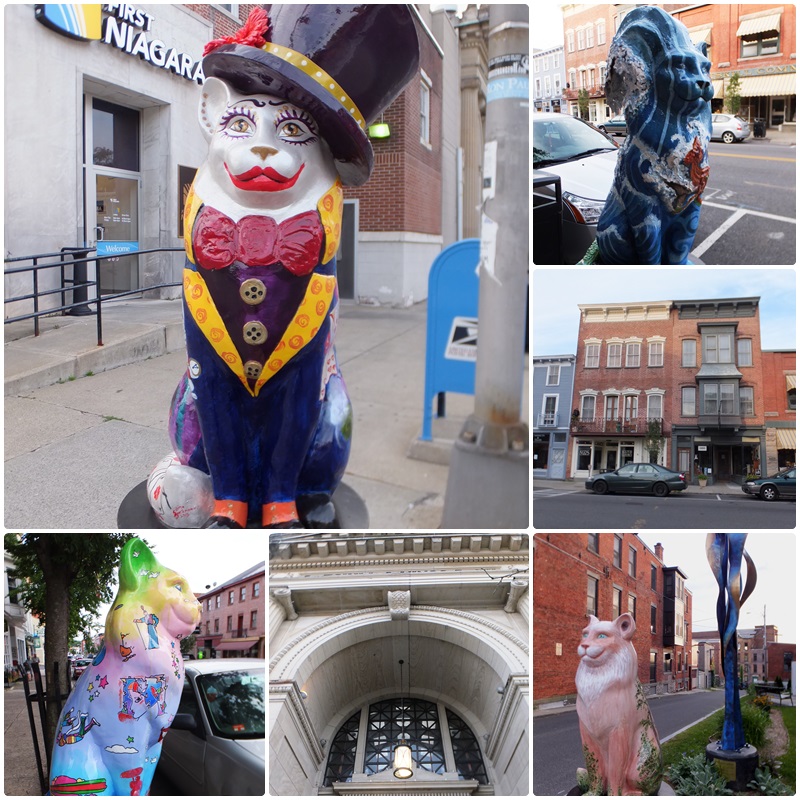 Local artists participated in the “Cat’n Around Catskill 2013 Celebration”

We continued our explorations of downtown Catskill, that historic town by the Hudson River. The unique name “Catskill” actually comes from the original Dutch settlers and means “cat creek”. The Catskill Chamber of Commerce has come up with a very innovative cat-themed program called the “Cat’n Around Catskill 2013 Celebration” where 47 cats (and puppies) have been put up and painted by local artists. They were scheduled to be auctioned off at the end of September. This festival has been so popular that it is now in its 7th season and about uniquely painted 330 fibreglass cats have already been auctioned off over the years with proceeds going to local social agencies. 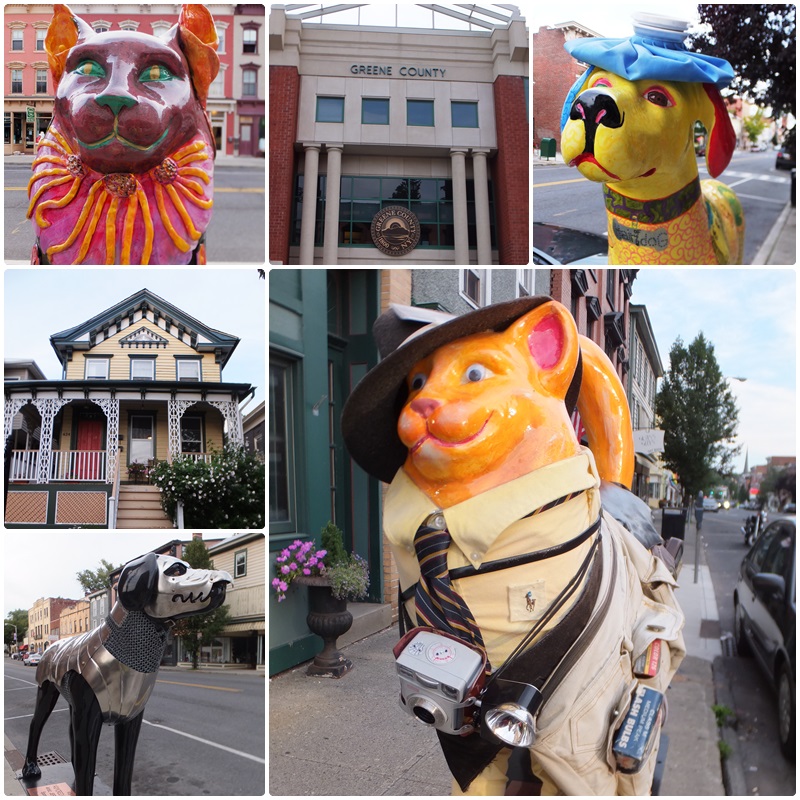 Here are more cats and dogs from the “Cat’n Around Catskills 2013 Celebration”. This year’s 47 artistically painted cats and dogs will be auctioned off for a good cause on September 29. What a great fundraising idea!