An Excursion to the Loire Valley: the Chateau de Chenanceau, Chateau d’Amboise, Clos Luce with its Connection to Leonardo da Vinci

On April 23, 2012 I had an out-of-town excursion planned from Paris: a train trip to the historic city of Tours, which is located right in the heart of the scenic Loire Valley. I got up at 5:45 am, took two subway lines from Paris’ east end to the Gare de l’Austerlitz and started to roll out of the station before 7:45 am. It was going to be another partially rainy day, but that wasn’t going to deter me. I got to Tours at 9:45 am, walked straight into the Tourism Office and booked a Loire Valley tour in the afternoon. For 28 Euros I was going to visit three different castles in France’s most famous valley.

By 1:30 pm our minibus left and a small group of tourists got whisked by our friendly driver from the Saint-Eloi tour company to the first famous castle: the Château de Chenanceau, a gorgeous castle that spans the Cher River, a tributary of the Loire. The current castle was built in the French Renaissance style in the 1500s. Famous aristocrats are connected to this chateau: Francis I, King of France, who seized the castle from the previous owner for unpaid debts; Diane de Poitiers, the powerful mistress of the castle; and Catherine de Medici, the wife of King Henry II. With its mix of late Gothic and early Renaissance architecture and its stunning interior, Chenanceau is the most visited castle in France, after Versailles. 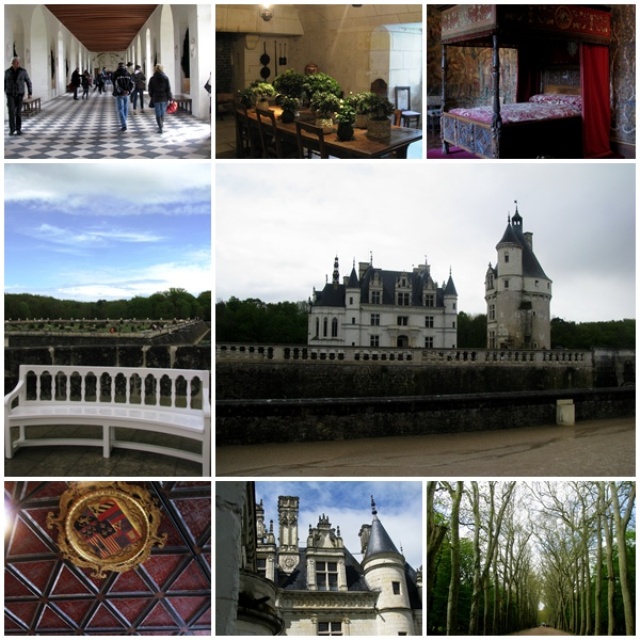 The second stop on this guided tour of the Loire Valley was the Château d’Amboise, located in a strategic position on an outcropping above the Loire River. Charles VII of France took the castle over in 1431 and from that point forward, this castle become a favourite among the French kings. In the late 1400s, Italian architects were brought in to modernize the castle. One of the interesting stories of this castle is that French king Charles VIII died here in 1498 after he had hit his head on a door frame. Leonardo da Vinci came to this castle in 1515 and worked nearby at the Château de Clos Lucé which was connected with the Château d’Amboise through an underground tunnel. 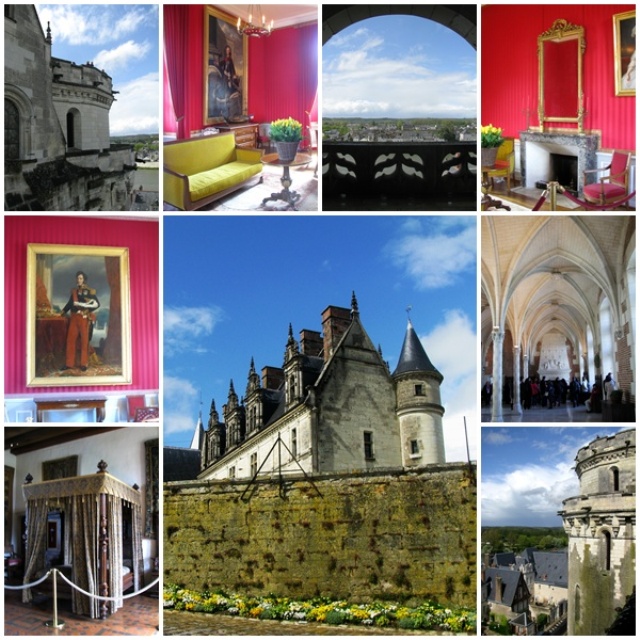 After this castle visit we had a bit of free time to explore the town of Amboise, a pretty medieval town of about 12,500 people. Amboise has a clock tower, the “Tour de’l Horloge” from the 15h century and narrow cobble-stoned streets. A history museum is located in the former town hall from the 16th century. Next to the chateau there are a number of outdoor cafes and chocolate shops that provide great views of the historic houses from the Middle Ages. Joan of Arc even passed through this small town in 1429 AD. 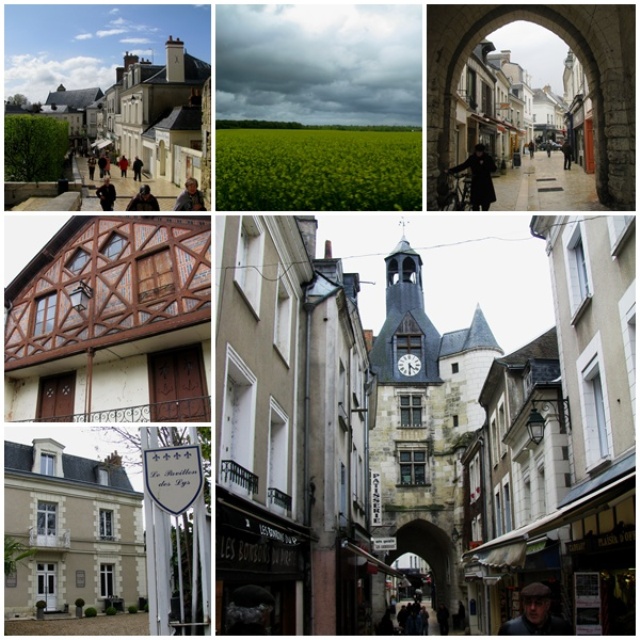 Finally, we got to see where the brilliant Leondardo da Vinci did his work. The last stop on our sightseeing tour of the Loire Valley was the Château de Clos Lucé, a 15th century manor house that is located a mere 500 metres from the impressive Château d’Amboise. Leonardo Da Vinci was invited by the French king Francis I to come to Amboise in 1516 and was given this mansion as accommodation and a place to work. Leonardo da Vinci lived in this manor house for the last three years of his life and died there in 1519. Today the mansion is a museum and holds countless drafts and many models of Da Vinci’s designs. Copies of some of his famous paintings as well as quotes from his writings are also exhibited here. 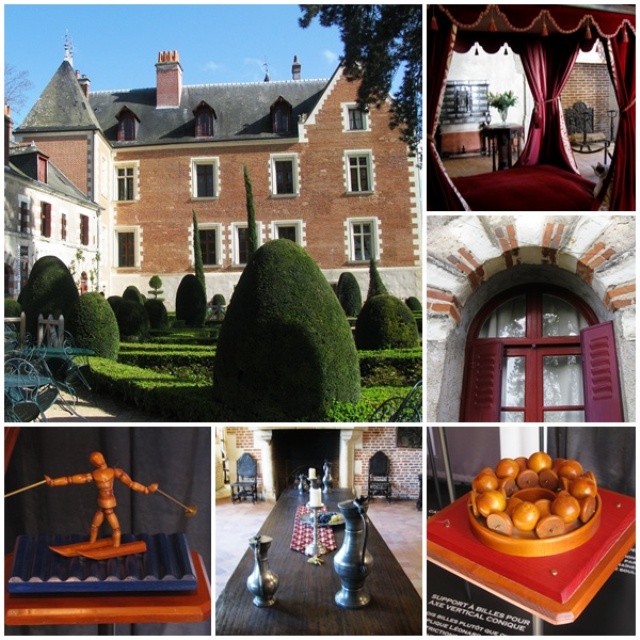 The Château de Clos Lucé in Amboise, one of the many chateaus of the Loire Valley, has a fabulous Renaissance garden, the “Parc Leonardo Da Vinci”, and as the last residence of this famous Italian universal genius, the entire garden is dedicated to Leonardo, his paintings and inventions. During my visit I realized that the entire garden could be considered a “Leonardo Da Vinci Theme Park”, with bridges that were designed by Leonardo, a huge image of the Mona Lisa hanging from a tree, and thematic panels that recall his work and philosophies. One of the buildings actually holds canvasses and paintings that he created and his presence can be felt everywhere on the premises. 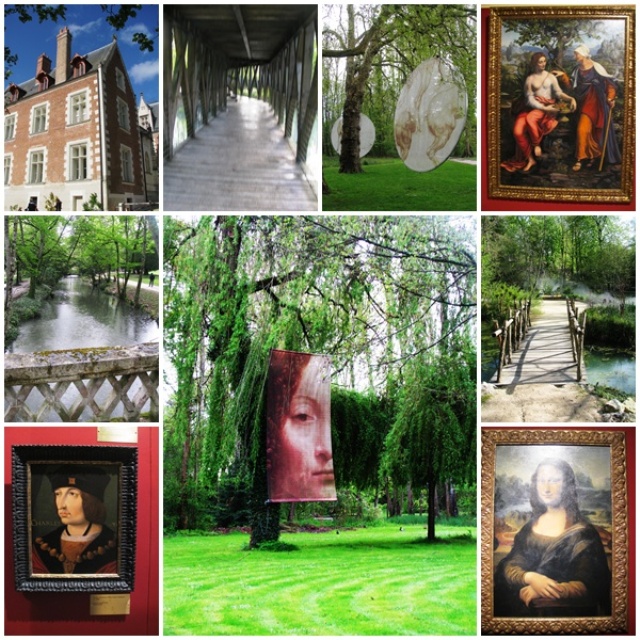 In the early evening our friendly tour bus driver took everyone back to the city of Tours and I retreated to my reasonably comfortable budget hotel on the outskirts of Tours. I was hoping that the weather would be better tomorrow and that I would have a chance to explore Tours without the rain before heading back to Paris.