Christmas is a very special time of year and Christmas markets have long been part of European festive traditions. The Toronto Christmas Market in the Distillery District has now become part of this tradition for the third year in a row and has become an important Toronto travel idea in the winter time.

On December 12, 2012 I decided to visit this year’s Christmas Market in one of my favourite parts of Toronto. The Distillery District is a 13 acre entertainment district that evolved from the historic Gooderham & Worts Distillery to become the largest collection of Victorian-era industrial buildings in all of North America.

Founded in 1832, Gooderham and Worts became the world’s largest distillery within 30 years and kept operating until 1990. After spending a period of time empty and serving as a backdrop for various movie shoots, the complex was purchased in 2001 by local real estate developers and opened two years later, after a successful and award-winning transformation. Since then it has become one of Canada’s most popular tourist attractions.

Today, the Distillery District is a National Historic Site and home to 18 retail stores and boutiques, 5 cafes and 7 restaurants, 22 galleries, 17 performing arts organizations as well as 4 educational facilities. Most of the Victorian architecture has been fantastically well-preserved, although in recent years several residential condominium towers have claimed some of the historic space.

Despite these modern additions, this pedestrian-only complex is one of the best historic and entertainment areas in the city. It also hosts regular events and festivals. During the summer, it is the location of weekend art markets, hosts locations for the TD Jazz Festival and the Summerlicious Restaurant Festival, plays host to the Sunday Music Series, and participates in Nuit Blanche, Toronto’s overnight contemporary arts festival. Visitors can enjoy Segway Ghost tours and a whole host of other performances. 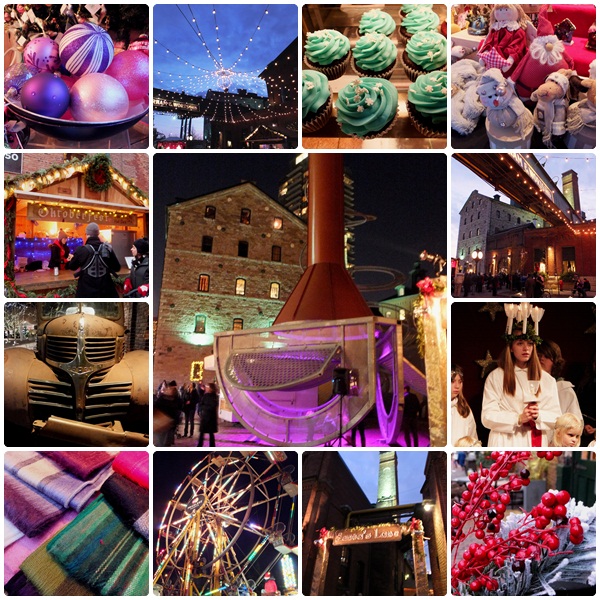 The 2012 Toronto Christmas Market at the Distillery District

The Toronto Christmas Market is sponsored by Lowe’s and is now being held for the third year from November 30 to December 16, 2012. A tradition that started 700 years ago in Germany, Austria and other parts of Europe had finally arrived in Toronto. For a passionate photographer like myself, the Distillery District offers a wonderful backdrop through the entire year, but with 40 outdoor vendors, 18000 lights and a huge 45 foot high Christmas tree, it becomes a magical place at Christmas.

During my stroll on a relatively balmy December evening I had a look at the wooden booths that were selling everything from Christmas ornaments from the Black Forest and Holland, Alpaca wool scarves and sweaters and beeswax candles to European toys and memorabilia as well as chocolates and candies.

The selection of food vendors has also improved since last year and now includes everything from poutine (the high-calorie French-Canadian treat), to perogies, meatballs, hot grilled cheese sandwiches and fresh pretzels, Belgian waffles, home-made fudge and apple fritters. Mulled cider and “Glühwein” (mulled wine in the German Christmas tradition) as well as beer, cocktails and hot rum beverages are also on offer in several beer gardens that are equipped with open fire pits to keep the visitors warm on a cold winter night.

The 17 days from November 30 to December 16, 2012 also include a packed event schedule featuring stars such as Measha Brueggergosman, Canada’s award-winning star soprano; also on the lineup was Jarvis Church and Soul Station – formerly head singer of the Philosopher Kings. Various choirs and a number of folkloric dance groups are also part of the schedule, and every day a Santa’s Elves Sing-Along invites the audience to participate in singing Christmas songs.

The World Caroling Challenge was held on December 8, 2012 as a world record attempt for caroling. During that event, a $1 donation was made for each participant to the Daily Bread Food Bank, sponsored by the Mill Street Brewery, a popular Toronto micro-brewery that has its home right in the heart of the Distillery District.

During my visit yesterday I got to witness the Sankta Lucia Celebration, a Swedish Christmas tradition that involves a procession of children led by Saint Lucia, a girl in a white dress with a crown of candles.

A visit to the Distillery District is an enjoyable Toronto travel experience at any time of year, but during the time before Christmas it becomes a truly special event.