A Hilton Head beach walk is without a doubt one of the most popular things to do in Hilton Head. Located at the very southern tip of coastal South Carolina, Hilton Head is a shoe-shaped island with about 12 miles or 19 km of sandy Atlantic coastlines.

The weather in Hilton Head is very conducive to all sorts of outdoor activities since it is very mild during the winter season while it can be stiflingly hot and humid in the summer. During our stay in late November of 2012 we had very pleasant temperatures between about 15 and 20 degrees and we only had one day of cooler, overcast weather.

Golf in Hilton Head is probably what the island is most well known for. The island boasts more than 20 championship golf courses, including the Robert Trent Jones Course (at Palmetto Dunes), the Hilton Head National Golf Club, the Island West Golf Club and Eagle’s Pointe Golf Club. Our condominium abode was located right on the Shipyard Golf Club inside the Shipyard Plantation. Every April, Hilton Head Island hosts the RBC Heritage at Harbour Town Golf Links, one of the PGA’s signature events right after the Masters Tournament, the only annual PGA tournament in South Carolina.

On Hilton Head Island tennis is another big draw. A shoulder injury prevented from fully engaging in one of my favourite sports, but I did sneak in a couple of recreational doubles games with people we had met at the Shipyard Plantation. Most of the resorts in Hilton Head offer tennis on location and there are several well known tennis resorts on the island. Ivan Lendl, for example, runs a junior tennis academy on the island, and the Palmetto Dunes Tennis Center was named the “#1 tennis resort in the Carolinas” by Tennis Magazine. There is no shortage of opportunities for tennis players on Hilton Head Island. 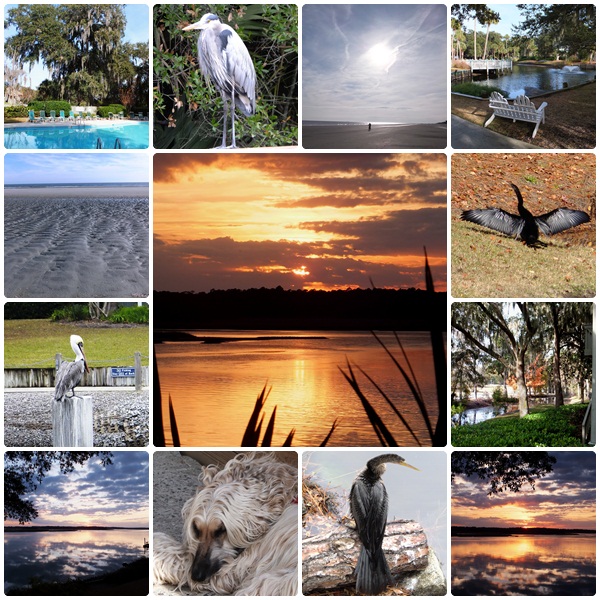 Cycling in Hilton Head is also very popular. We were very fortunate in that we actually had 2 free bicycles included with our vacation home, but there are many Hilton Head bicycle rental places all over the island. The beach has hard-packed sand so it’s easy to cycle right next to the Atlantic Ocean. There are 117 miles of shared use pathways and 108 miles of paved shared use paths on the island. Keep in mind that about 70% of the island is taken up by gated communities and it is not possible to cycle inside these communities without being a resident or visitor of that plantation.

On November 28, 2012 I embarked on a bike ride from the Shipyard Plantation that took me along the busy William Hilton Parkway to the Shelter Cove area. The area features a marina, some restaurants as well as various retail stores, set against a backdrop of vacation condos. During my ride I stopped several times to admire the sea birds that were perched in the marshy creeks. It was fascinating to watch the pelicans swoop in time and again and pick up fish after vertically dive-bombing at high speed. Hilton Head Island is a paradise for birdwatchers and nature lovers.

Shopping in Hilton Head is another popular activity with the many well-heeled travellers on the island. Hilton Head is home to many boutiques, jewellery and gift shops, sport stores, galleries as well as to two big Tanger discount outlets.

Restaurants in Hilton Head are also abundant and offer a wide range of culinary choices. Some of the most popular local dishes are prepared with fresh oysters, shrimp and crab. Lowcountry cuisine includes such famous delicacies as catfish stew, crab cakes, gumbo, oyster roast and she-crab soup.

One of my last activities during our stay was a Hilton Head beach walk on November 30 on the wide sandy beaches along the Atlantic coast on the east side of the island at the foot of Pope Avenue. Given the time of year, the beach was not very busy, and there were only a few people jogging, walking or bicycling. I capped off my last day on the island with a phenomenal sunset looking out over the coastal waters of South Carolina.