Baltimore is one of the great historic metropolitan cities on the Eastern Seaboard. Once an industrial powerhouse, Baltimore went through a period of decline in the second half of the 20th century. It has been emerging from these tough times in recent years and has become a major center of tourism and travel. Our Baltimore travel souvenirs are especially designed for locals who are proud of their city, as well as travelers who fell in love with Baltimore or have a special bond with it. 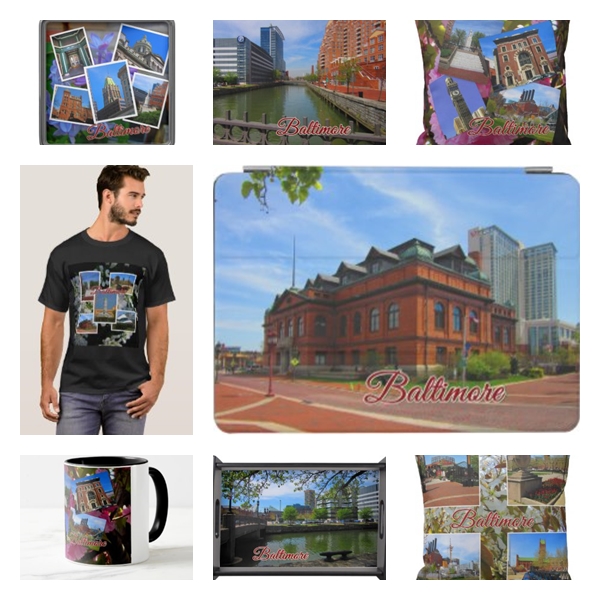 Baltimore’s most famous district is the Inner Harbor; this is where most of the big attractions and hotels are located. Among the favourite tourist attractions here you will find the National Aquarium, the Maryland Science Center, the American Visionary Art Center as well as the Baltimore Civil War Museum.

Other downtown must-see destinations include Camden Yards – the first “retro” major league ballpark that was constructed for the Baltimore Orioles in 1992. The Bromo-Seltzer Arts Tower was constructed in 1911 and modelled after the Palazzo Vecchio in Florence; it is not to be missed as it is home to a number of artist studios today.

Downtown Baltimore has numerous skyscrapers of different eras of US architecture. The Baltimore Basilica was built between 1806 and 1821 and is the oldest Catholic cathedral in the United States. Mid-town Baltimore is one of the city’s nicest districts and home to the Performing Arts District, Penn Station, the Station North Arts District, the University of Baltimore and many other interesting destinations. Baltimore’s turnaround is one of the exciting recent trends in the resurgence of America’s historic cities.