The main entrance to the Glen Stewart Estate was on Glen Stewart Crescent where Alfred Earnest Ames’ residence was located. Gene took me to the property which is a large mansion that has been converted into a multi-unit apartment building. The mansion has lost quite a bit of its former glory, but when you look at it closely you can still picture the beautiful and imposing villa that it once must have been. In 1906 Canada’s Governor General stayed here for one week to attend the Queens Plate held at the old Woodbine Race Track, an event that attracted thousands of horse-racing fans from around the country.

Behind the mansion is a steep drop off, and in the ravine below the crest Alfred Earnest Ames built one of the first golf courses in Toronto in 1920. Before the construction of the golf course this part of the property had consisted of woods and ponds. Alfred Ames’ stables were located just below the crest on Long Crescent.

A small dead-end street called Leonard Circle is the former location of the Glen Stewart Estate’s ponds, and some of the houses on this street are actually built on stilts, a necessary construction technique due to the marshy ground. The ponds went all the way to the north end of today’s Williamson Road School, and Gene explained that around 1912 at least three or four boys died in the pond. The back entrance of the school was the main entrance to the palatial Glen Stewart Estate. The houses west of Lee Avenue were not part of the Glen Stewart Estate; they were built in the 1920s while the houses east of there on the former estate were put up in the 1950s.

Southwood Drive, the extension of Main Street south of Kingston Road, was the borderline between the Glen Stewart and the Glen Duart estates. East of Southwood Drive there was only bush. When Alan Maclean Howard moved out around 1915, the property was subdivided and houses went up on Glen Manor Drive East. Today’s Glen Stewart Ravine was the location of several ponds that were located on the former Glen Duart Estate. Gene added that the ravine should really have been called the Glen Duart Ravine since it was part of Alan Maclean Howard’s estate. 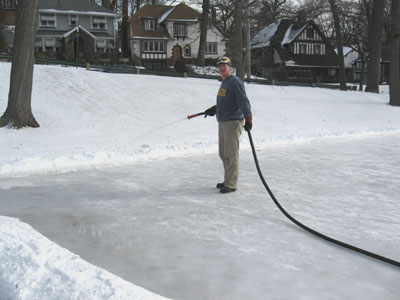 Thomas Neal is working on the maintaining the natural ice rink

As we were driving south along Glen Manor Drive, we stopped at the natural ice rink that is maintained by local Beach residents. Gene introduced me to Thomas Neal, a local real estate agent, who dropped by a few years ago to take his boys skating and realized that the rink had been closed down due to municipal funding cuts. Together with Brock Grant, another neighbour, he decided that the community would run the rink itself, and ever since then the two men with the help of other neighbours, have been maintaining the natural ice rink on a daily basis.

Brock and Thomas take turns, and Thomas alone spends about five hours a day maintaining the ice rink. When I got there Thomas had just hooked up a big hose to the water supply and was spraying the rink with water which was freezing fast on this chilly day. After every snow fall he and several like-minded volunteers come out to shovel the rink. Now there are two sides to this natural ice rink: one side is designated for hockey players and one side is for pleasure skating. Thomas said that even Guy Lafleur once visited this natural ice rink. He added that he loves maintaining the rink, it is great for the kids, and at night the facility turns into a beautifully lit venue.

The community spirit is strong here, and Thomas Neal is just another example of how regular citizens pitch in and help out in the Beach. I let Thomas continue his work, and returned to Gene who pointed out a wooden bridge that crosses the Glen Stewart Ravine which has been there since 1915. The bridge will be replaced by a new model in the near future, but Gene, with his love for history, adds that he would love to hang on to the original one. 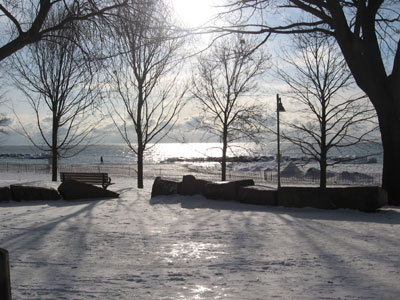 A freezing winter day in the Beach

Ivan Forrest Park, at the southern terminus of the Glen Stewart Ravine, was named after a Parks Commissioner of the City of Toronto from the Second World War. Alan Maclean Howard’s ponds were finally diverted into pipes which carried the water into Lake Ontario. Further north, the natural part of the Glen Stewart Ravine stretching towards Kingston Road has not changed much throughout recent history. Gene explained that the ravine is a favourite destination of naturalists and bird lovers because of the large variety of bird species and indigenous plants.

From the Glen Stewart Ravine we crossed Queen Street southwards and arrived at the former location of the Scarborough Beach Amusement Park, a development that was started in 1906. The former owners of this parcel were the Sisters of St. Joseph who ran the “House of Providence Farm”, a specialized school for people with disabilities, in this area.

Revellers would come from the city in street cars of the Toronto Railway Company; these used to turn down on Scarborough Beach Boulevard. A giant velodrome used to be located just west of this street, and the street car would end at the bottom of Scarborough Beach Boulevard. Further south near the Hubbard Apartment Buildings used to be the midway with a giant Ferris wheel and 125 foot high tower that was lit nightly with thousands of electric lights. The tower was also used for a variety of stunts by different performers. The Scarborough Beach Amusement Park also included a quarter-mile long roller coaster ride, and different attractions such as a “Tunnel of Love” and a “Shoot the Chutes” flume ride. The first boardwalk in the Beach ran from the Hubbard Street apartment building to Fernwood. 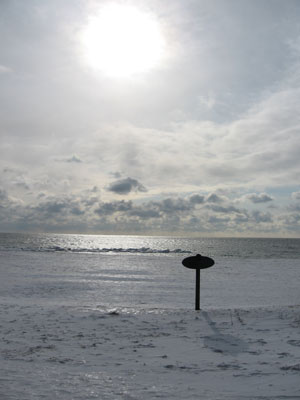 At the bottom of Scarborough Beach Boulevard is a historic plaque that tells the story of the amusement park. As an expert in and advocate of local history, Gene Domagala has been lobbying for historical preservation in the Beach for many years, and was able to get six historic plaques installed in this area. The plaque commemorating the Scarborough Beach Amusement Park is one of them.

After the amusement park closed down in 1925 the land was bought up by developers; among them were the Price Brothers, a team of Toronto-based real estate developers who created more than 200 houses in the area, among them a whole section of architecturally unique fourplexes characterized by their front porches and arched verandas. Several of these fourplexes on Wineva Avenue have been listed on the City of Toronto’s Inventory of Heritage Properties as a result of their unique design. 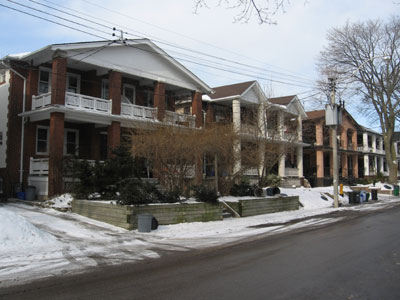