Our drive continued further east, and at the intersection of Maclean and Queen Streets Gene pointed out a historical property: the elevated building behind the Beacher’s Café is actually the original location of Alan Maclean Howard’s residence, although it has been modified a great deal over the years. Gene had been looking for it for a long time and could not find Howard’s original house. He realized that the street numbering on Queen Street had changed several times, and he had finally found the original house of Alan Maclean Howard. We drove north of Maclean Avenue and arrived on a winding, hilly road called Pine Crescent. This is the only area in the Beach where there is brick pavement. Gene explained that several neighbours came together and pitched in to get a historic reconstruction of brick pavers installed in their road. At the top of the hill is a beautiful private residence called “Pinecrest” which dates back to 1902 and was designed by renowned architect Charles Frederick Wagner, who had also created the well-known Inglenook property on Waverly Road. 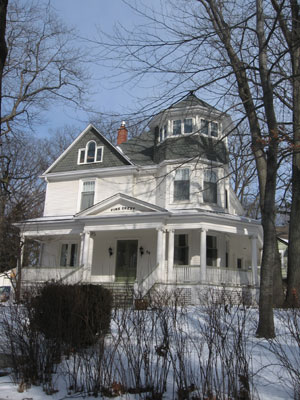 Across the street is a mansion formerly owned by Joseph Harris, a member of the Canadian Parliament. We then drove up towards Kingston Road, past Glenn Gould’s birth house on Southwood Drive. Glenn Herbert Gould (1932 to 1982) was a celebrated Canadian pianist and became especially well known for his recordings of Johann Sebastian Bach’s keyboard music. Gene added that Gould was almost better known in many countries around the world than he was in Canada. A historic plaque educates visitors about the life of this outstanding Canadian musician. 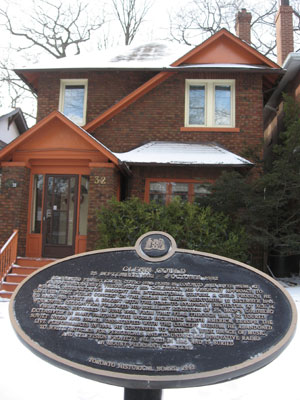 Once arrived on Kingston Road we drove by the Notre Dame Convent which also houses a local Roman-Catholic school. This area used to hold the car barns for the Toronto Street Railway Company. We drove into the neighbourhood north of Kingston Road and turned left on Swanwick Avenue. Gene started explaining to me that this entire area used to be called the Village of East Toronto. Just up the street were the largest freight yards of the Grand Trunk Railroad which included marshalling yards, coal storage facilities and a roundhouse. The area near Gerrard and Main Street was a center of railroad activity in the late 1880s until the early 1900s. About 300 to 400 workmen were employed here, and many of the houses were built for these railroad employees. In total the Village of East Toronto had about 5000 residents.

Gene added that many of these employees were rather transient, they would often move from job to job, depending on the opportunities that presented themselves. There was a problem with the freight yards, however: the steep gradient from downtown Toronto to the Village of East Toronto necessitated three locomotives, three firemen and three engineers in the moving of the trains. Because of this unsuitable topography the CN freight yards closed down in 1908 and relocated to Belleville and Etobicoke respectively, a move that plunged the area into a serious long-term economic decline. 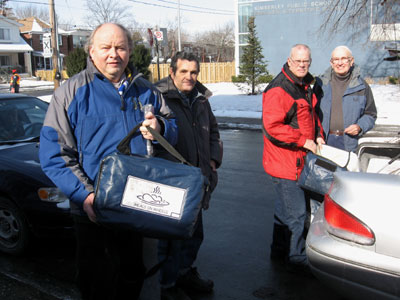 Bob Murdoch and volunteers work on the Meals on Wheels deliveries

We continued our drive and stopped at Centre 55 where Gene briefly connected with Bob Murdoch. The Meals on Wheels deliveries were in full swing, and Bob and several of the volunteers had their hands full. From there we continued to Gerrard Street where we briefly dropped in at the offices of the Beach Metro News. The new edition of the paper had just been printed, and several of the captains had come in to pick up their many bundles of paper to pass on to their volunteers who look after the street delivery of the paper. As Gene also volunteers as a captain with the Beach Metro News he picked up his bundles of paper, and then we continued our historic drive. 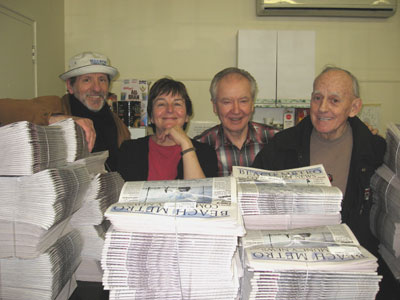 Our conversation went back to the historic significance of the Main and Gerrard area. Gene added that there were three major intersections in the Beach: Queen and Lee, Queen and Beech as well as Main and Gerrard. He explained that the area featured a farmer’s market and a mix of smaller townhouses and nicer homes. At the corner of Enderby Road and Gerrard Street is a house that used to be owned by a man named Donald George Stephenson. He was a lumber merchant with a physically imposing appearance who was also the mayor of East Toronto. He was well known for his overspending ways, and in 1894 he built a series of row houses on Norwood Terrace, but ended up accumulating major debts and in the end he pulled a disappearing act to escape his creditors. 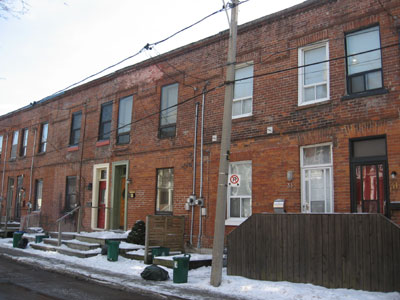 Behind Norwood Terrace today is the Main Street Bridge which used to be a wooden trestle bridge during the 1920s, spanning eight railway tracks. The area around Main Street was a thriving commercial hub with its own farmer’s market, diverse retail stores and several theatres. One of these theatres was the Ideal Theatre which today is a local retail store. The YMCA used to be on the other side of the intersection where the Ted Reeve Arena is today. Several banks were located at the Main and Gerrard intersection. A hospital and a library were nearby. This was the real centre of East Toronto. 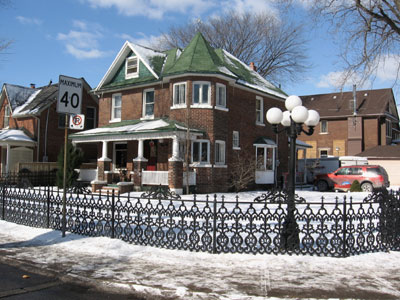 From this area we drove south to the intersection of Main Street and Benlamond Avenue, another historical centre. Gene explained that Main Street used to be called Dawes Road in this area. Following Benlamond Avenue into an old established neighbourhood that used to be blocked to the public by a gate, Gene told me about the business owner duo of Benjamin Morton and James Lamond Smith who were both bankers with the Bank of Upper Canada. They were major landowners in this area. Swanwick Avenue, a local street, was named after Mary Swanwick Morton. Together these two business men created the first golf course in Toronto in 1871 near Woodbine and Coxwell Avenues, just north of the St. John Norway Cemetery. On Glen Oak Drive near Norwood Park there are several large stately homes dating back to the 1940s and 1950s. There is no through traffic in this area, and this little nook is virtually unknown to most Torontonians. The house of Edward Lyall Morton, Benjamin Morton’s son, is in this neighbourhood, and some of the nicest houses are located on small side streets at the edge of an escarpment with a beautiful view over the Beach and Lake Ontario. 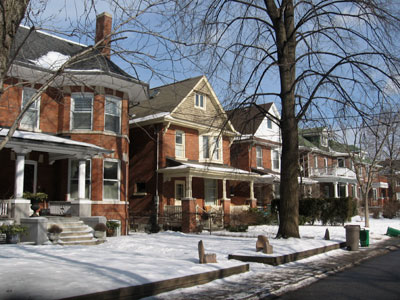 We came back out on Benlamond Avenue where the food bank at Calvary Baptist Church was in full swing. Gene added that this church features a beautiful stained glass window. Reverend Sneyd collected windows from bombed out churches in Europe after World War II and put them together into one giant stained glass window that was installed in the 1970s. We then drove east on Lyall Avenue, and Gene informed me that the first 60 houses on both sides of the street are actually protected as part of a designated heritage area. These homes were built for middle class families who had settled here permanently in contrast to some of the other lower income housing that was built for the more transient population of railway workers. Gene pointed out a unique feature of this neighbourhood: several street corners have houses with large front yards, an unusual sight in Toronto’s older high-density neighbourhoods. Gene referred to them as the “fifty-fifties”: the front yard measures fifty yards by fifty yards, and the houses are set in from the street. 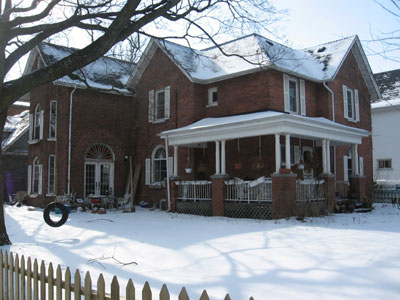 A “fifty-fifty” property, inset from the road