Gene Domagala is not only a key volunteer in the Beach, an individual who helps out with all sorts of charities and non-profit organizations – a “utility man” as Bob Murdoch from Centre 55 calls him – he is also one of the most knowledgeable individuals about the Beach. So in late December we had covered the western end of Queen Street East; today we were going to have a look at the eastern and northern end of the neighbourhood.

We met again at the Beaches Library, a great meeting point right in the heart of the Beach, at the intersection of Queen Street and Lee Avenue. Gene let me know that he had been notified this morning that the furnace of a local resident in the East end of the Beach had broken down, so our neighbourhood tour would also have to be a “mission of mercy” to deliver a few portable heaters to this family in need. So the first thing we did was to pick up three space heaters and drive into the east end of the Beach close to the Balmy Beach Club to drop off the heaters at a stately older home. Gene promised to be back later today to deliver a few additional heaters in order to make sure that the pipes in the house would not freeze since the furnace would not be fixed until tomorrow. 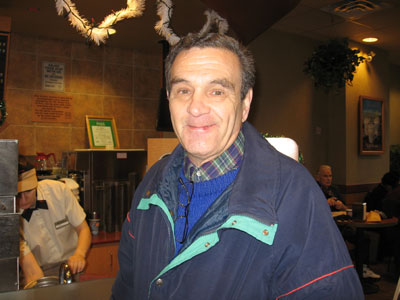 Gene Domagala – a pillar of the Beach Community

Gene explained that the Beach community is equipped for these sorts of emergencies; there are always a few extra heaters floating around, and Centre 55 keeps about 10 sleeping bags for critical cases when someone needs to stay warm overnight. A network of people looks out for their neighbours and makes sure they stay safe and healthy, even in the deep freeze that Toronto has been in for the last few weeks.

Since we were already in the east end of the Beach we decided to start our explorations right there. Gene explained that about 120 years ago there was a little village here with a local pastor whose name was H. Dixon. He started a tent church (literally a church located in a tent) and ran it from about 1880 to 1907. The tent church could hold as many as 500 people. Reverend Canon Dixon, as he was respectfully referred to in later years, was committed to ministering to the poor and founded missions and soup kitchens for the homeless. This tent church was later to become a permanent building – St. Aidan’s Church, which just recently revived Canon Dixon’s legacy with its participation in the Out of the Cold Program. 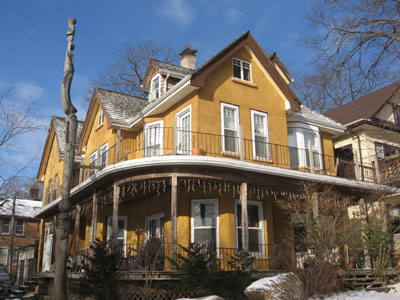 We drove down on Balsam Street, and Gene showed me six houses that originally date back about 110 years, beautiful wooden clapboard properties with unique architectural features. At the bottom of Balsam Avenue is the former Alexandra Hotel Annex, today a private residence. Gene explained that about a century ago there were substantial homes along the bottom of Fernwood Avenue which used to be called “Lakefront Avenue”. The Alexandra Hotel had more than 30 rooms, and two free standing additions were built: Annex 1 and Annex 2. The entire complex was a summer hotel and featured a boat house at the waterfront and little cottages in the back. In the 1890s tourists would come from downtown Toronto by streetcar to enjoy the beautiful waterfront experience in Toronto’s Beach neighbourhood.

Most of these buildings were torn down around 1929 or 1930, but the old Alexandra Hotel Annex remained and recently underwent a beautiful renovation. There were several influential historic figures in this area: Sir Adam Wilson – the first elected mayor of the City of Toronto, a prominent jurist and a major landowner in the Beach; Reverend Dixon; James L. Hughes who was also the Chief Inspector of the Toronto School Board, and John McPherson-Ross, the Mayor of East Toronto which included Balmy Beach. 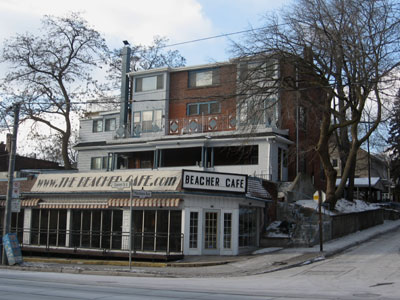 Our historical tour continued toward another historical intersection in the Beach: the intersection of Maclean Avenue and Queen Street. In the second half of the 1800s Alan Maclean Howard was one of the major landowners in the area. An interesting detail of his history is that his father was a clerk at the law courts in Toronto for 51 years, and his son held the same position, also for 51 years. A relative of Alan Maclean Howard was the first Postmaster of Toronto and a United Empire Loyalist.

Gene explained that Howard was a bit of an eccentric: he imported Guernsey cows and showed them at various agricultural exhibitions. He also had three large ponds with Peking ducks on his country estate which was called Glen Duart. Driving up on Hambly Street, Gene pointed out that this street at one point was supposed to be as wide as Spadina Avenue. Our drive continued north along Lee Avenue where Gene mentioned that this was the western end of another major estate in the Beach: the Glen Stewart Estate, owned by Alfred Earnest Ames. This self-made millionaire was the youngest president of the Toronto Stock Exchange, and at that time many successful stockbrokers and business people had beautiful mansions on Sherbourne and Jarvis Streets in downtown Toronto. In addition, they would also have summer homes in the Beach.

The Glen Stewart Estate starts north of Williamson Road, while south of this street was the location of the Glen Duart Estate. Ames had bought the Glen Stewart Estate in 1899 from a certain Walter Stewart Darling who was a minister in the area. Alfred Earnest Ames also had two duck ponds on his estate, and a white picket fence surrounded the entire expansive property. A twelve foot embankment bordered the property east of Lee Avenue, this embankment was later levelled after Ames had sold his property and it was divided up into a residential subdivision. The Glen Stewart Estate ended at Kingston Road. 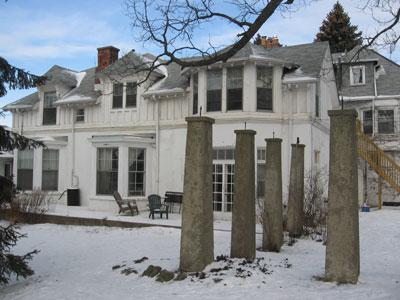