Our next brief stop during our tour was at Malvern Collegiate, a venerable educational institution since 1903. Malvern is one of Toronto’s top academic high school and counts such illustrious graduates as Glenn Gould, Robert Fulford and Don Getty. Other celebrity students at Malvern include Norman Jewison, Alex Trebek, Keanu Reeves, Kiefer Sutherland and Jack Kent Cooke. The impressive library wing addition on the west side of the building opened in 1987 and features a statue that dates back to the First World War. 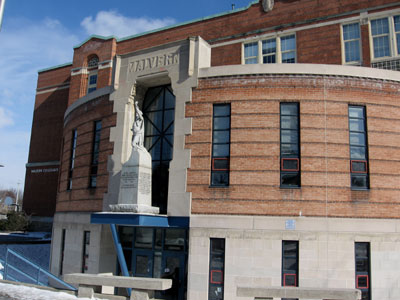 From here we headed down on Hannaford Street to Kingston Road where Gene showed me a local convenience store that used to be “Ritches Dairy” – a stone insert in the building’s façade still testifies to the agricultural heritage of this area. Gene added that about a dozen dairies were located here about a hundred years ago, and he explained that there was nothing on the south side of Kingston Road until the 1940s. 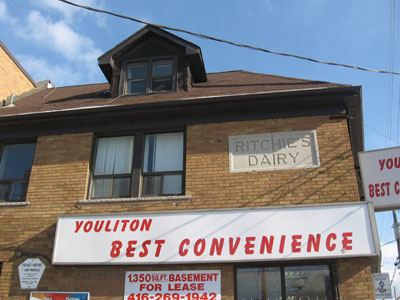 Kingston Road was not a thriving business area at that time, as a matter of fact there were still agricultural operations in the area including several chicken farms. Near Balsam Road and Beech Avenue we reached the end of the Village of East Toronto. This area was built up in the 1920s and had two theatres. The Kingston Road United Church at the intersection of Scarborough Road is a historic anchor in this area; and the Pegasus Thrift Store, Marie Perrotta’s charity thrift shop, is located almost directly across from the Kingston Road United Church. 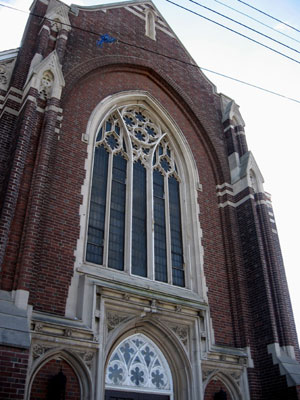 A little ways east we stopped the car and headed into the local Scotiabank Branch at Kingston Road and Bingham which has about an 80 year history. Gene wanted to introduce me to the Branch Manager, Carolyne Pitre, who also helps to run the Kingston Road Business Community. The entire Kingston Road area between Main Street and Victoria Park has been undergoing extensive revitalization over the last few years with new specialty retailers, galleries and hospitality businesses moving in. The popularity of the Beach as a neighbourhood has attracted many investors and new residents to the area. While at the bank we also ran into Hong Zhao, Publisher of the Beaches Community Living Guide, another one of my interviewees. What a small world Toronto can be…. 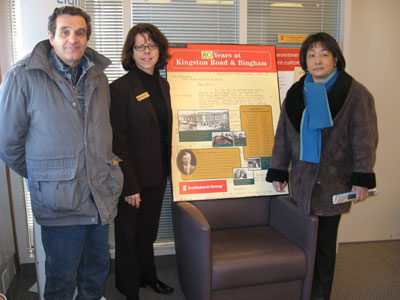 After our brief visit we went east to Victoria Park Avenue where we turned south. The forerunner of today’s Roman Catholic Neil McNeil High School used to be St. John’s Industrial School, a school for “bad boys”. This school operated roughly from 1890 to the 1950s when the new Neil McNeil High School was built. As we drove towards Lake Ontario on Bracken Avenue with beautiful views opening up over Neville Park Road, Gene added that he has seen major changes in Lake Ontario’s shoreline in the last 40 years. The lake and the Beach neighbourhood itself are in constant flux, but one place that remains after almost a hundred years is the Fox Theatre in the eastern end of the Beach. Originally built as the Prince Edward Theatre in 1913, today the Fox is the longest continuously running movie theatre in Toronto and one of the oldest movie houses in all of Canada. Across the street, Quigley’s Pub and Bistro is the former Ross’ Drug Store which dates back to 1902. The Wholesome Market on the east side of Queen and Beech used to be a bank in former years. Gene added that vaudeville was being performed in Munro Park until 1906, so this area was one of the entertainment centres in the Beach. 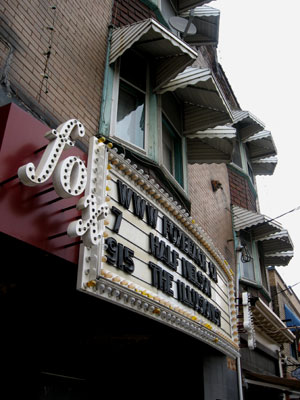 The Fox, an institution in the Beach

We drove north on Beech Avenue to a small street called Pine Terrace which features a long east-west facing building that is set in from the street that is totally different from the rest of the residential architecture. Gene informed me that this building used to be a summer hotel and was built by William Williamson, a well-known builder and land developer more than a century ago. The hotel is part of the Beach’ resort town history. 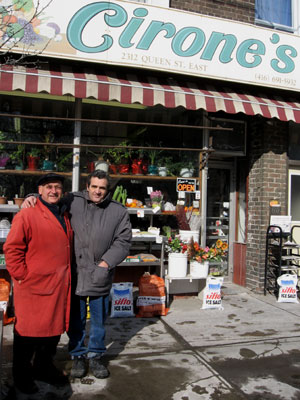 Cirone’s Food and Joe Cirone, also a fixture in the Beach

From there we made a stop at another local neighbourhood fixture: Cirone’s Foods, a neighbourhood grocery store that is really a miniature sized all-round store for anything that a local resident might ever need. Gene and I stopped by to meet the owner, Joe Cirone, who has been operating this store since 1966. Joe is a real character, and once you get to know him he freely shares stories of his childhood which happened around this neighbourhood as well. Gene explained that although Joe has done very well he has always maintained his loyalty to the Beach and continues to operate his business here. His roots are solidly anchored in the Beach.

So, a history tour that was supposed to have taken a couple of hours had lasted from 9 am until about 2:30 pm. Not only was I quite frozen and ravenously hungry, I had learned so much about different areas of this neighbourhood that are just literally five, ten minutes from my own house. Gene had opened my eyes to a whole new universe just outside my door step, a universe full of interesting people and fascinating stories that stretch back almost a century and a half. I really appreciated Gene’s time and all the knowledge he had shared with me. I had a feeling I was only scratching the surface of Gene’s historical expertise of the area since he had in-depth knowledge of probably every block that we visited. 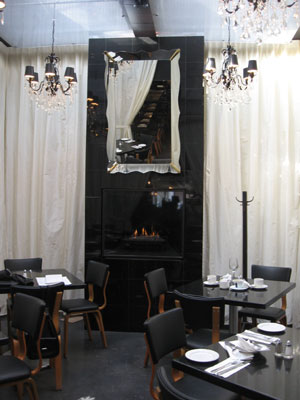 Back dining room at Il Fornello, a great table by the fireplace

After our goodbye I needed to satisfy the growling hunger in my stomach and I decided to head into Il Fornello which has just recently relocated to its new location across from the Beaches Library. Il Fornello is part of a group of about nine restaurants that operate throughout the city and was honoured as one of Toronto’s Top Ten restaurants according to the Zagat Restaurant Guide 2006. The cuisine is upscale Italian and features an extensive menu of appetizers and salads, pastas and entrees, pizzas and desserts. Weekend brunches are particularly popular at Il Fornello.

I sat down in the back room which features a large fireplace, and after a day in the freezing cold I was finally able to warm my frozen bones. I ordered the Wild Mushroom Pizza with button, shitake, oyster mushrooms, brie and basil oil: a very tasty lunch-sized meal. On the side the Insalata Roma with mixed greens, chèvre, roasted red peppers and roasted walnuts in a balsamic vinaigrette was a delicious healthy addition to a hungry travel writer’s lunch. 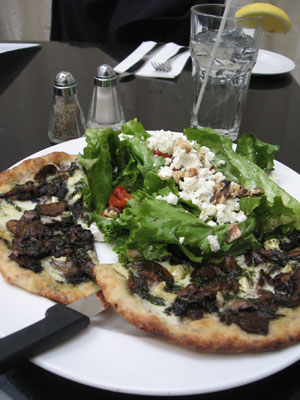 Sitting in front of the fireplace I started to relax and reflected on what a wonderfully diverse and historic neighbourhood the Beach is. Gene Domagala’s history knowledge and neighbourhood stories nourished my curiosity; and Il Fornello’s tasty lunch nourished my body.

Who says you have to leave Toronto in order to have a wonderful travel experience. This was a perfect day of discovery!