Ontario Travel: A Country Bike Trip and Dinner at the Little Inn in Bayfield

After a good lunch at the Black Dog Village Pub and Bistro on October 10, 2011, we were now ready to embark on our afternoon cycling adventure and headed back across the street to Outside Projects to meet up with Tyler Hessel who was going to take us out on a guided bike ride of the area.

Tyler has a background in recreational studies, but also worked in sales before starting his business -“Outside Projects” – together with his wife Heidi Martin, who is equally passionate about outdoor recreation. Today Tyler and Heidi offer guided hikes and bicycle tours, snow-shoe tours and even team building events for corporate clients. 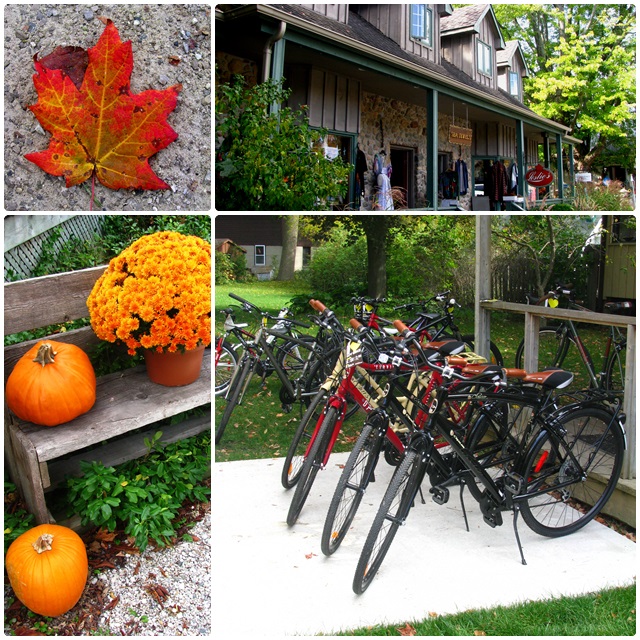 Getting ready to go biking

Just about 8 km outside of Bayfield we stopped at the Lake View Christian School and Tyler explained that the area is home to a large number of conservative and progressive Mennonites. This school is run by conservative Mennonites, and summer and winter, local Mennonite children can be found on the ball diamond playing baseball or soccer. Many Mennonite families are located along Bronson Road and the large families are running very successful farming operations.

Then we cycled up the hill to Goshen Line, which represents another ridge rising up from Lake Huron from where we had a great view over the surrounding agricultural areas as well as the lake glimmering in the distance. Tyler explained that the most important cash crops here are feed corn and soybeans, but local farmers also grow some white and red beans and winter wheat. A new initiative has been in the works for the last few years: Huron County has been investigating the option of becoming a wine-growing region. 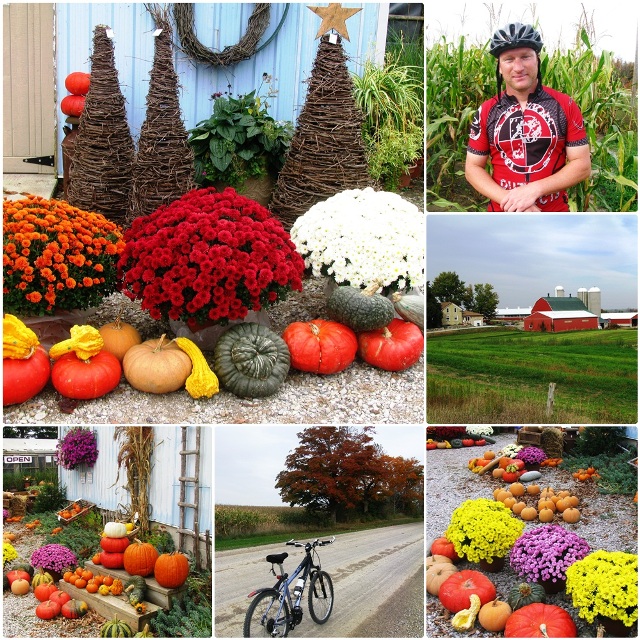 After more than 30 km we were almost back in town when we stopped at the Porter’s Hill Wild Bird Seed Company whose property was decked out in multiple attractive arrangements of pumpkins and fall flowers. The assortment was so colourful I just had to stop and take some pictures. By 5:30 we were back in town, a bit out of breath, but definitely enriched by the knowledge that Tyler shared with us about the local region. Then we rested up a bit in our cozy room at our B&B, Clair on the Square, before heading out for dinner to the Little Inn, Bayfield’s historic inn on Main Street.

The dining room was a bit quiet as most of the out-of-town guests had already headed back into the city. Renowned for its excellent cuisine, we selected some delicious choices: a finely spiced Butternut Squash Soup and an Heirloom Tomato Caprese salad, followed by a Lake Huron Pickerel with local corn risotto, baby shiitake mushrooms and a nasturtium leaf sauce. My main dish was a low temperature roasted Local Pork Belly, with unique heirloom vegetables and a Kimchi Piperada red pepper sauce. The meat of the pork absolutely melted in my mouth and the crunchy skin of the pork belly was a taste and texture delight. Although I don’t usually eat much meat in general, this pork dish was divine. 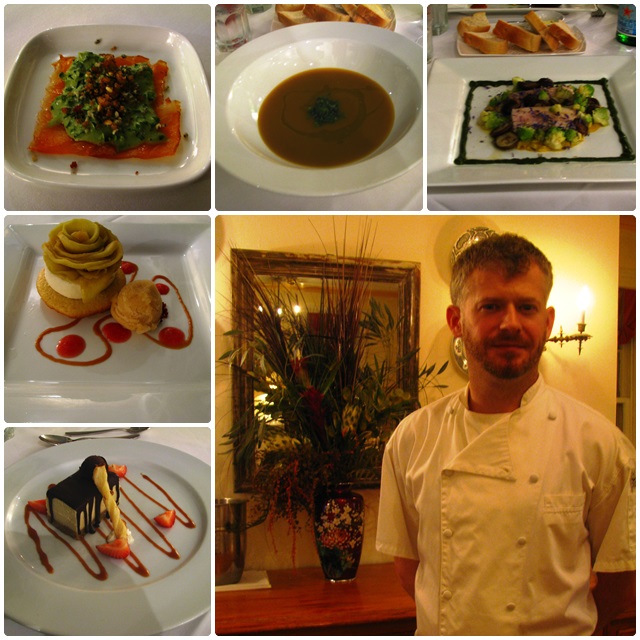 Dinner at the Little Inn

We indulged a little more and shared a heavenly Bailey’s Cheesecake and an Apple Sour Cream Cake with apple cider sorbet. Last but not least, we had a chance to meet Executive Chef Joseph Petrinac who is a master chef who trained at the Ritz Hotel in Paris, and at various other upscale establishments in France and Spain. Joseph is also good personal friends with Ferran Adrià, the celebrity chef of El Bulli, voted the world’s best restaurant five times between 2002 and 2009 by Restaurant Magazine, who is often associated with “molecular gastronomy”.

Joseph explained that his cuisine is based on fresh, local and organic ingredients and that he purchases his meat from a famous local butcher by the name of Metzger (incidentally German for “butcher”). A local Mennonite family grows his vegetables and he picks every year what he wants to grow. I certainly had some unique vegetables: Romesco – a miniature cauliflower / broccoli vegetable, miniature Chinese artichokes as well as baby eggplants. Joseph commented that occasionally his menu goes a little crazy with his exotic ingredients. His unique choices are certainly a result of his international experience, which also includes stints in Chicago, Montreal and Toronto. When I asked Joseph what brought him to this rural area, he explained that he originally grew up around here and relocated three years ago to Bayfield to be closer to his aging parents. 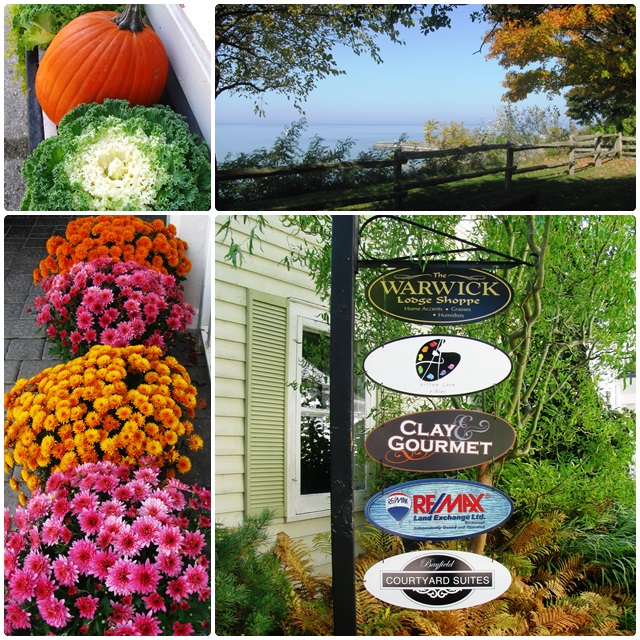 I was truly impressed by the culinary diversity and sophistication on offer at the Little Inn of Bayfield and by the immensely personable character of its executive chef. We had indeed enjoyed a full day in Bayfield and were ready to rest up for a final day on Ontario’s West Coast.