Buffalo Travel: The Forest Lawn Cemetery and Dinner at the Blue Monk

As the sun came out we continued our walking tour of the Forest Lawn Cemetery in Buffalo and admired the large collection of mausoleums and gravestones. One of the most interesting ones is a sphinx on a pedestal, dedicated to the Gilbert family. We also saw tiny square gravestones in the grass that only had the name “Baby” on it, a very common practice about 100 years ago when many children (and their mothers) still died during childbirth or shortly thereafter. 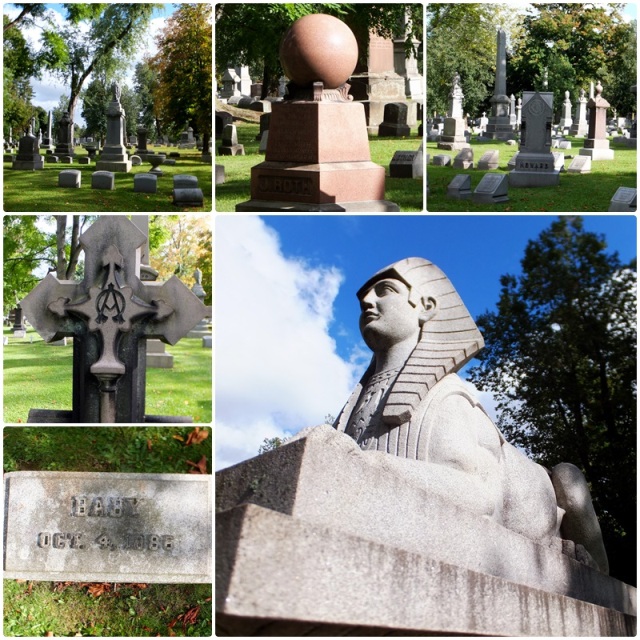 During our walking tour of Buffalo’s Forest Lawn Cemetery, we even saw a gravestone that came from the Sears Mail Order Catalogue, delivered in 1886, in the early days of catalogue marketing. We were also captivated by the memorial to the Blocher family where our expert guide Nancy Cardillo told us the sad story of John and Elizabeth Blocher whose son Nelson had died young, apparently of a broken heart. Nelson had fallen in love with the family’s maid, Margaret Katherine Sullivan, and the parents who were wealthy Buffalo merchants, disapproved of the relationship. They sent their son away on business and when he returned, Katherine was gone. Nelson went searching for his beloved Margaret in Ireland but could never find her again and died shortly after, heartbroken over losing the love of his life.

A tragic love story commemorated at the Forest Lawn Cemetery

The Forest Lawn Cemetery in Buffalo is full of impressive monuments. One of the most striking is a statue of Red Jacket, a Native American Seneca chief and head of the Wolf Clan. After the American Revolutionary War, he negotiated the Treaty of Canandaigua in 1794 where the Seneca lost a lot of territory due to having been allies of the British. We also admired the Blue Sky Mausoleum, designed by Frank Lloyd Wright with granite stones that are built into the landscape and a soaring monolith. Although designed in the 1920s, this mausoleum was not built until 2004 when today’s structure was executed by an architect that was trained by Wright himself. On our way back to the Chapel we also admired Serenity Falls, the only waterfall inside the cemetery.

An impressive sculpture of Red Jacket at the Forest Lawn Cemetery

On our last evening in Buffalo we drove back to the Elmwood Village to the Blue Monk, a gastro pub that features 32 beers on tap and 76 different beer varieties in bottles from all over the world. The focus is on unique beers from small, non-mass-market breweries.  Each of us tasted a small sampling of 4 different kinds of beers, with mine a little on the sweeter side and my friend tasting stronger Belgian, German and American beers. When I did my research about restaurants in Buffalo, I was attracted to the Blue Monk’s Belgian-focussed menu which features dishes such as Duck Frites (French fries fried in duck fat!) with House Sauces, Belgian Onion Soup, Poutine and many more tasty and unusual dishes. The young team at the Blue Monk was very welcoming and the atmosphere was pleasantly casual. 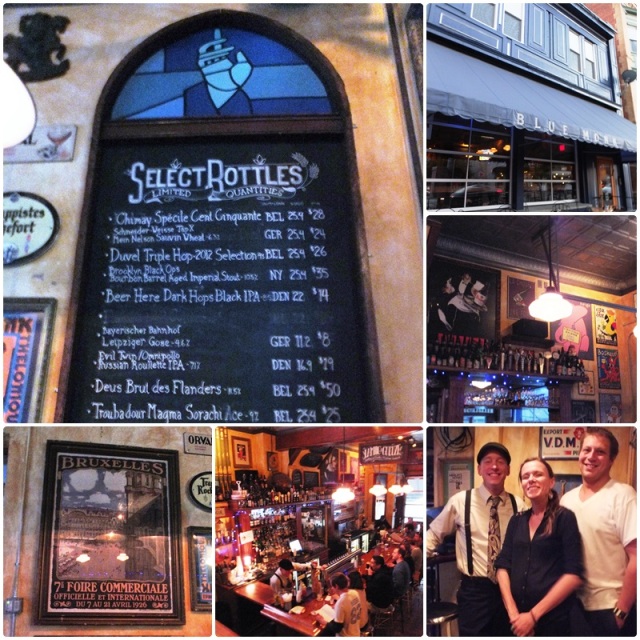 Getting ready for dinner at the Blue Monk Gastropub

Then it was time for dinner at the Blue Monk Gastropub in Buffalo’s Elmwood Village. We started our meal with scrumptious Pretzel-crusted Calamari with a side of Garlic Aioli, followed up by a Grilled Pear Salad with dried cherry, blue cheese, walnuts and a Port wine vinaigrette, combined with an absolutely mouth-watering Ultimate Grilled Cheese Sandwich (made with aged Gouda, Grand-Cru Gruyêre, white cheddar and tomato on sourdough). My friend ordered the Ommegang Abbey Ale Braised Short Rib Sandwich. With these unique sandwiches, we got to taste 6 different dipping sauces which included Roasted Garlic & Sea Salt Aioli, Black Truffle Ketchup, Peppercorn Caperberry Aioli, Thai Curry Ketchup, Honey Cayenne Aioli and Sirachi Aioli. With all these creative dipping sauces and the various cheeses, I experienced a veritable smorgasboard of savoury tastes. Chef Tony also showed me the gorgeous backyard patio which must be a great place to hang out in the summer. We had definitely picked a nice spot to have dinner on our last night in Buffalo.

A smorgasboard of tastes at the Blue Monk in Buffalo