On this rainy day in Buffalo we continued our program with a trip to the Albright-Knox Art Gallery, the city’s modern and contemporary art museum. Founded in 1862, it is one of the oldest public arts institutions in the US and the current classicist building was designed for the 1901 Pan-American Exposition, although it took until 1905 for it to be completed. The Albright-Knox Gallery is one of Buffalo’s most venerable cultural institutions and has an extensive collection of more than 6,500 works of art from the latter part of the 19th century all the way up to contemporary art. 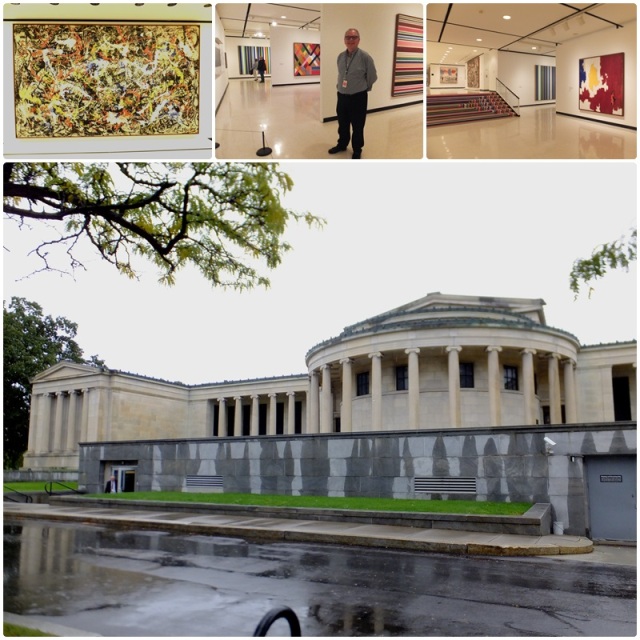 Expert docent Jim Marsh, a volunteer for the Albright-Knox Art Gallery, took us through the museum and started showing us the contemporary abstract collection of paintings. I was also fascinated by the “op art” (optical art) which employs strong graphic geometrical patterns, many of which produce interesting optical illusions. 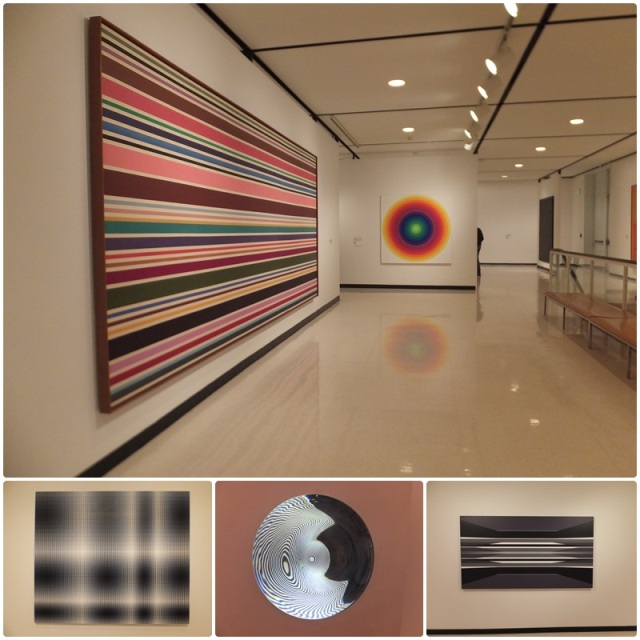 Among its 6,500 works of art, the Albright-Knox Art Gallery in Buffalo also has an outstanding collection of Impressionist paintings: currently on display I saw a smorgasboard of the biggest names in Impressionism. One section of the museum holds masterpieces by Henri de Toulouse-Lautrec, Pierre Renoir, Henri Matisse, Camille Pisarro, Paul Cezanne, Edgar Degas and Pablo Picasso at the end of his rose period. All of the most famous Impressionist painters are represented here at the Albright-Knox Art Gallery. 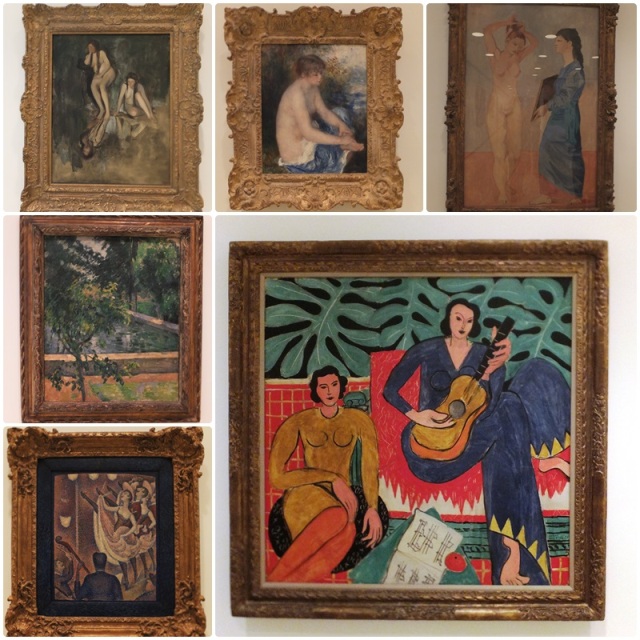 Impressionists at the Albright-Knox Art Gallery

The Albright-Knox Art Gallery also has a substantial collection of abstract art from the early 20th century. Abstract art was very revolutionary since it departed from reality, and total abstraction provides no reference whatsoever to any recognizable subjects. Interesting pieces such as Arthur Garfield Dove’s “Fields of Grain as Seen from Train” (1931) still bear some resemblance to recognizable objects, but this type of art certainly challenges the viewer to find his or her own interpretation. 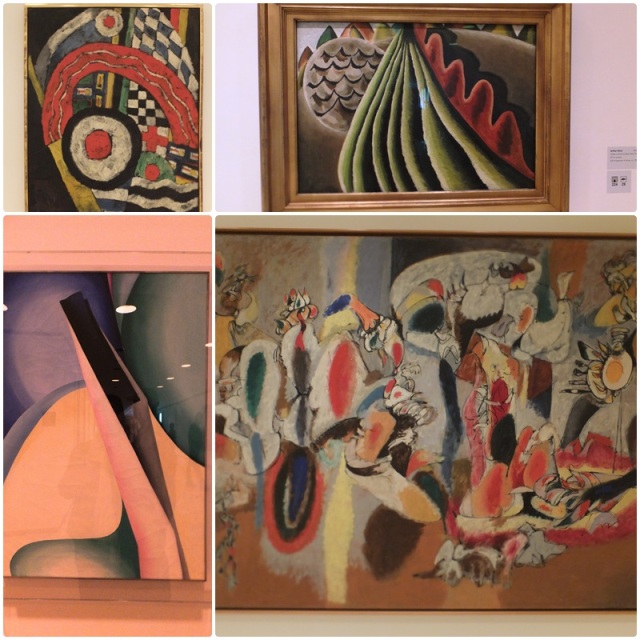 One of my favourite spots at the Albright-Knox Art Gallery in Buffalo is the grand staircase that holds “Wall Drawing #1268: Scribbles: Staircase“. Artist Sol Lewitt conceptualized this installation in 2006 and it was executed in 2010, after his death. The staircase connecting the old and new part of this art museum has been turned into a giant art installation, now featuring geometric pencil scribblings on the walls that took 15 artists about 6 weeks to complete. This is a long-term installation, but according to the artist it will be taken down some day and painted over.  We continued with a visit to the Surrealists which include famous paintings by artists such as Giorgio De Chirico, Rene Magritte as well Salvador Dali. 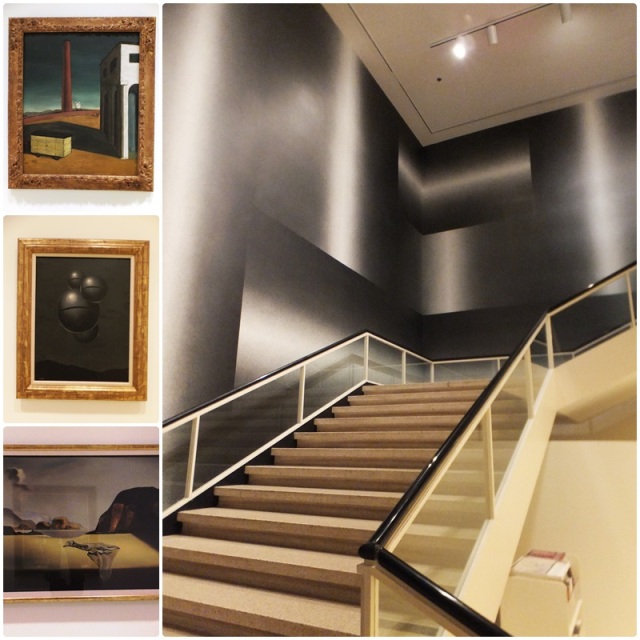 Our visit at the Albright-Knox Art Gallery in Buffalo next brought us to the Sculpture Gallery in the original part of the museum that dates back to 1905. The building was designed by prominent Buffalo architect Edward Brodhead Green and was slated to be used as the Fine Arts Pavilion for the 1901 Pan-American Exposition, but due to construction delays the building was not completed until 1905. Built in the Greek Revival style, the Sculpture Gallery is a very impressive space with tall columns and large glass windows in the ceiling, perfect for displaying large art objects. The sculpture we admired is called “Untitled (Domestic) by British artist Rachel Whiteread and represents the negative space around a staircase. With its giant white dimensions, it perfectly fills this classic display space. 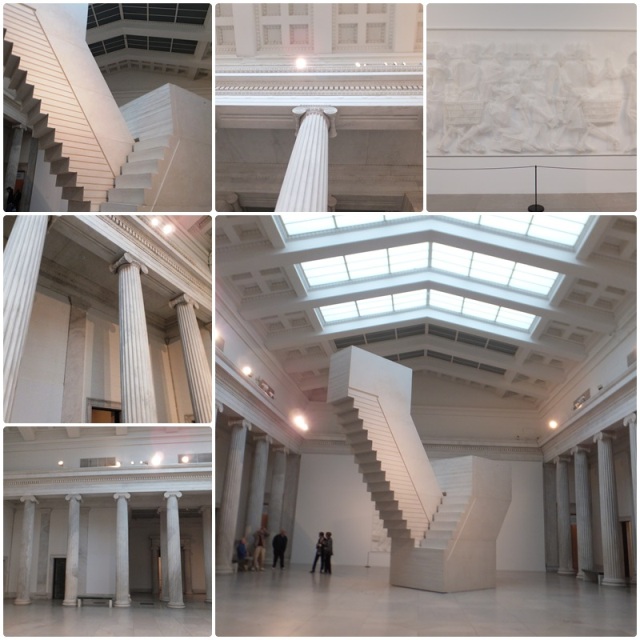 With its permanent fine art collection as well as its temporary exhibitions, there is always something different going on at this art museum. With modern and contemporary works that now span about 150 years, the Albright-Knox Art Gallery encompasses art from a wide range of major 19th and 20th century modern-era artists. It also has extensive collections of Abstract Expressionism, Pop art and art from the 1970s. We capped our educational visit off at the AK Café which offers a nice menu of light lunches. 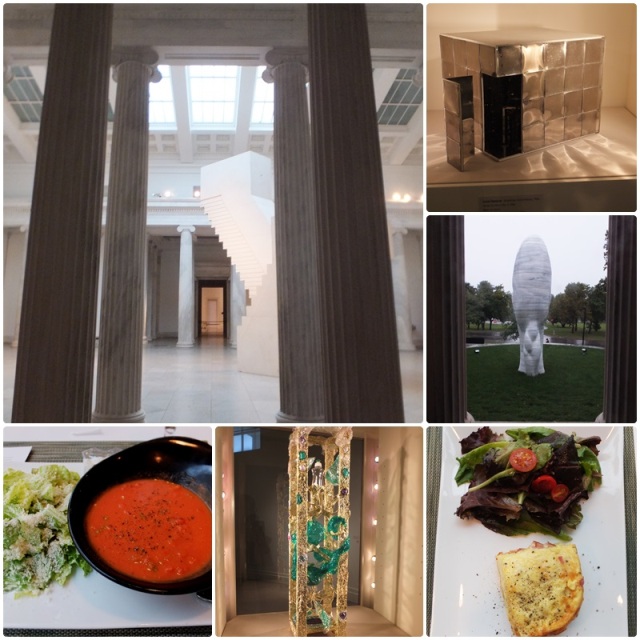 Lunch at the AK Café

Finally, in the evening we headed back to the Hotel @ the Lafayette to have dinner at the Pan-American Grill & Brewery. We sat down in the former Lafayette Tap Room, a historically restored place reminiscent of an early 20th century beer hall. The menu features six varieties of beer that are brewed right on site, in addition to rotating seasonal and specialty beers.  After an appetizing French onion soup I tasted the Three Cheese and Roasted Garlic while my friend enjoyed the Pan Blackened Tilapia. I also admired the wall paintings that are prominently featured in the hallways and even in the bathrooms of the Pan-American Grill, all inspired by the historic images of the 1901 Pan-American Exposition. 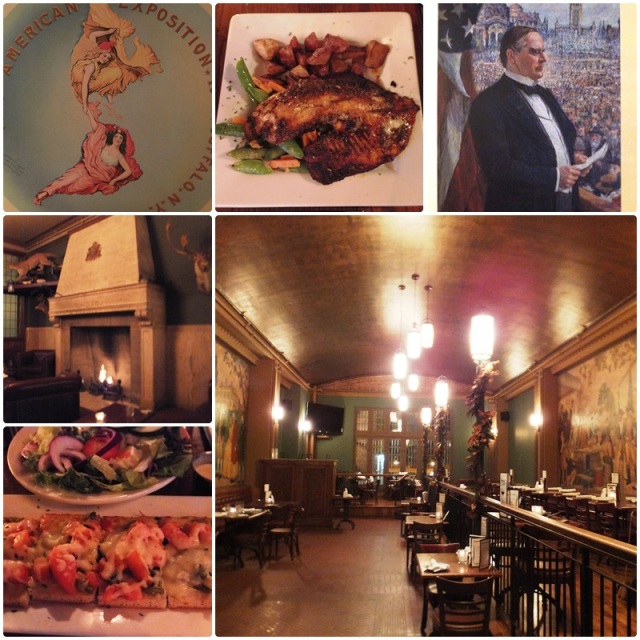 Dinner at the Pan-American Grill