After my enjoyable walking tour of the Arenal Springs Resort,  I connected with my travel partner around mid-day and we booked a taxi to go to the nearby town of La Fortuna. Just about 5 kilometers from the Arenal Springs Resort, La Fortuna was given the name of “the fortunate one” after the 1968 eruption of the Arenal Volcano. This small town had originally been called “El Borio”, but on a fateful day in July, a volcanic eruption destroyed two villages in the vicinity of the volcano and killed more than 100 people. But this town was lucky and escaped destruction.

One of the major attractions in La Fortuna is “La Catarata de la Fortuna”, a 70 metre high waterfall outside of town. The entire Arenal area is popular with active travelers who enjoy mountain biking, kayaking, ATV biking, whitewater rafting and horseback riding. Adventurous travelers also seek out other adrenaline-inducing activities such as zip-lining, bungee jumping or canyoneering.  La Fortuna has several hostels and moderate hotels that cater to the active crowd. 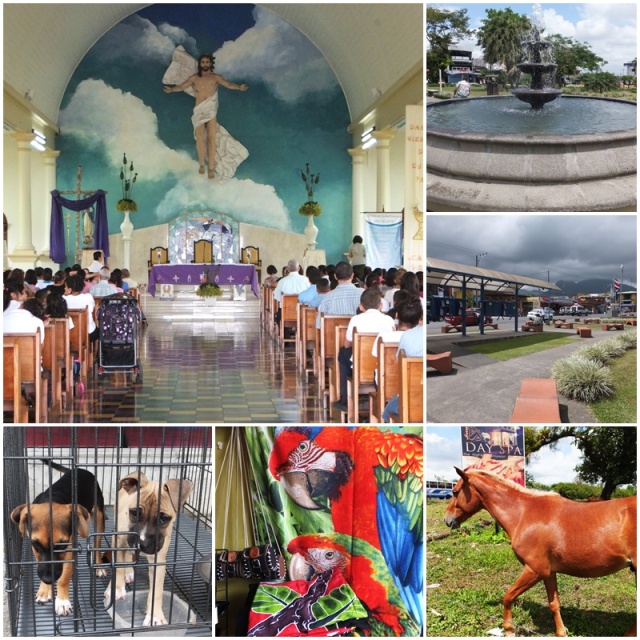 Meanwhile, we contented ourselves with exploring the town on foot. La Fortuna is located inside a fertile agricultural area and most of the buildings are fairly new as the town was only settled in the 1930s. Children were attending mass at the modern church as it was Ash Wednesday. Next to the church is an attractive park with various shrubs, palm trees, tropical flowers and a few benches to enjoy a little break.  In recent years, tourism has become a main economic driver in the region and the town is full of bars, restaurants, shops and tour companies.

In addition to being a centre of active travel, the Arenal region is also becoming a popular destination with foreign retirees.  We popped into one of the local real estate offices and ended up talking to a real estate agent who said that people are retiring here from Canada, the US and Europe. He explained he currently has a new 2 bedroom / 2 bathroom condo for sale for $70,000, so this area of Costa Rica still offers affordable retirement options. 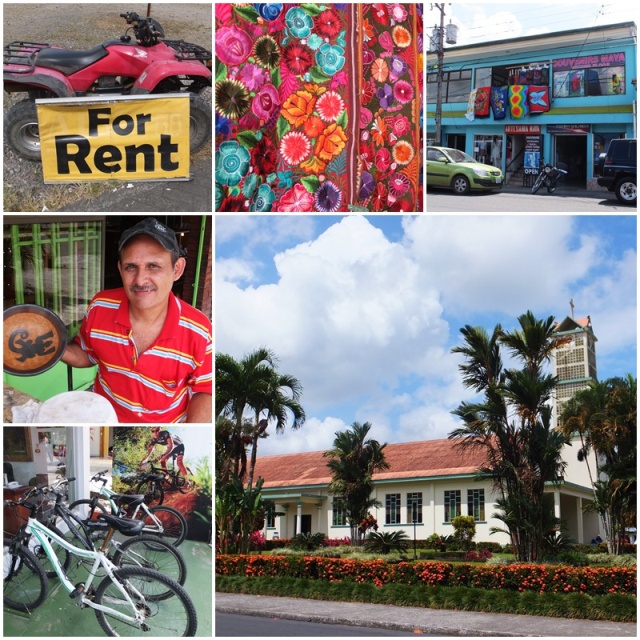 By mid-afternoon we hailed another taxi and while my friend went back to the resort, I asked to be dropped off at the Arenal Natura Ecological Park. The park is run by a local family, Ronald and Patricia Ferreto and their children Steven and Cheryl. The Ferretos have always been passionate about nature and wanted to contribute to preserving Costa Rica’s abundant natural heritage. So they invested all their assets, purchased land in the stunning Arenal area and reforested and restored the land. Today, Arenal Natura is a tropical paradise and presents various eco-systems and numerous species of Costa Rican wildlife, flowers and plants

For $29 you get not only the admission fee but also a personal guide. Alberto took me under his wing and we started our walking tour by looking at the leaf-cutter ants, who literally travel on little ant highways, transporting comparably giant pieces of leaves, flowers and grasses. They use this plant material to create a fungal garden which supplies them with a food source. Fascinating creatures… 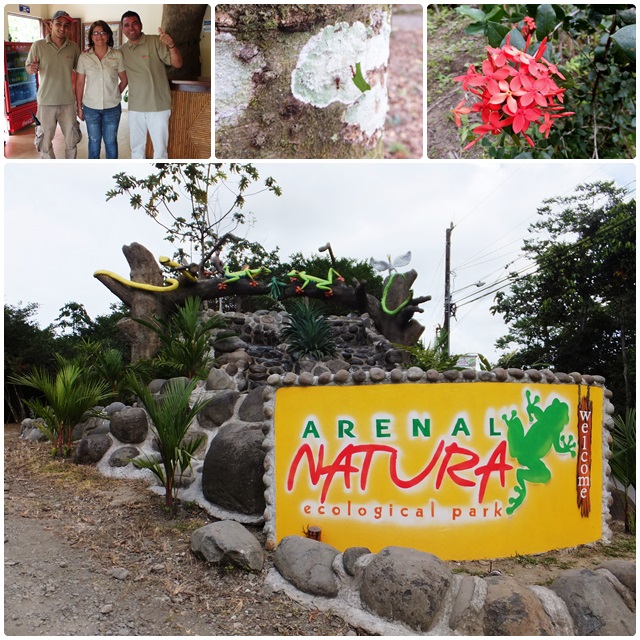 Starting my tour at Arenal Natura

Down the hill we stopped to admire six dangerous crocodiles, one of which was missing a piece of its jaw due to an earlier altercation with one of the other reptiles. Nearby was another pond that was home to three caimans, close cousins of the alligators but not quite as dangerous. Arenal Natura also has a frog farm located inside of 8 indoor habitats where you can see some of Costa Rica’s most well known frogs, for example the Red Eyed Tree Frog or the Poison Dart Frog. Also on display are snakes such as the poisonous Fer de Lance snake and large Boa Constrictors. 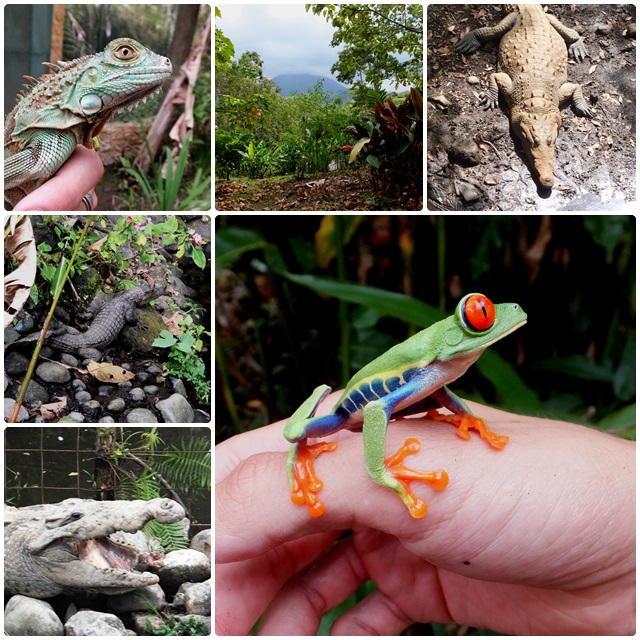 We walked outside the buildings and I noticed that Alberto was on the hunt for an animal. Before I could look twice, he had spotted a Red Eyed Tree Frog that was sitting on a shrub and put it in his hand. The frog was very docile and didn’t seem to mind being held captive for a brief period of time. Alberto even allowed me to hold this amazingly colourful creature that was looking at me suspiciously with its over-sized red eyes. The rest of this frog’s body was just as colourful: from its bright green back, to a blue stripe on the side, a white belly and orange feet, this frog is just a visually stunning and somewhat comical creature. 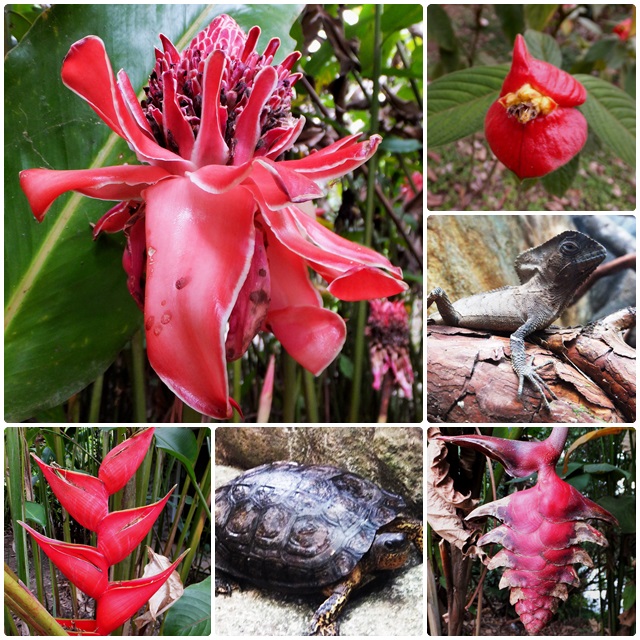 Heliconias and other tropical plants at Arenal Natura

At Arenal Natura I also loved all the plants, first and foremost the large collection of heliconias which dazzle with their large leaves and brilliantly coloured blooms that attract many hummingbirds. My nature tour had come to an end and I walked the rest of the way back to the Arenal Springs Resort to spend a nice relaxing evening after a full day of local explorations.

Tomorrow we were planning to discover more areas around the volcano, and I was looking forward to a rainforest walking tour at Arenal Hanging Bridges.