Our second day in Costa Rica, February 10, 2013, started very early since we had to make it to the village of Tortuguero on the Caribbean Cost of this country by this afternoon. At 6 am our large suitcases were picked up at the Real Intercontinental Hotel and we were only allowed to bring hand luggage as we going on a boat tour to an eco-lodge in the jungle that has no road access.

By 7 am we were on the road and our always cheerful bus driver Mario was navigating us through the streets of San José. After our Caravan tour would be over in 9 days, we were going to spend two days in San José on our own, but this bus ride through town gave me a little early glimpse of what Costa Rica’s capital looks like. 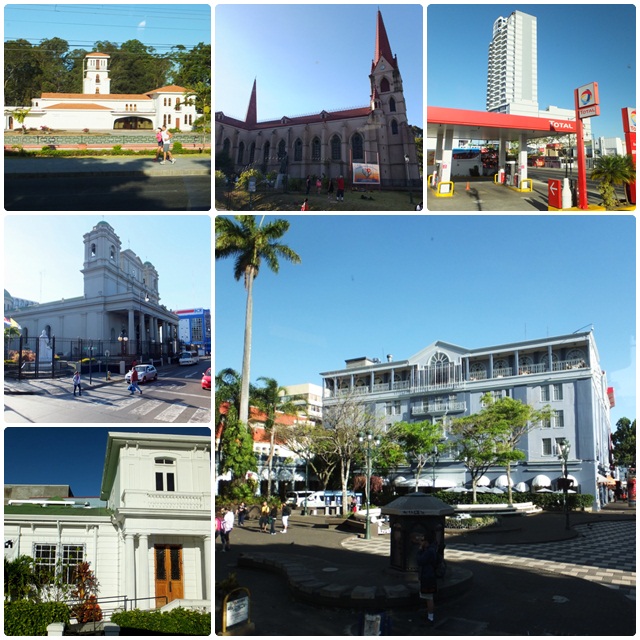 Our knowledgeable tour director Karol pointed out a few historic buildings in downtown San Jose, such as the Children’s Hospital, the Cathedral and the National Theatre, but overall it seemed there were just a few historic buildings, with lots of more recent architecture from the 1960s and 1970s mixed in. There did not seem to be that much architectural heritage left in Costa Rica’s capital and I was wondering why. I also noticed lots of barbed wire on top of the buildings, which surprised me because Costa Rica is among the safest countries in Latin America. I decided I would investigate these topics further later during our trip.

Then we drove out into the gorgeous landscapes of Central Costa Rica again and started to approach a lush volcanic landscape. San José is located in Costa Rica’s Central Valley and is surrounded on all sides by mountains and volcanoes. The scenery was absolutely magnificent and Karol explained at one point that we were crossing over from the cloud forest to the rain forest. We could clearly see the change in vegetation. She also showed us a banana flower, a beautiful red flower with small yellow shoots, all of which were going to develop into a banana when mature. 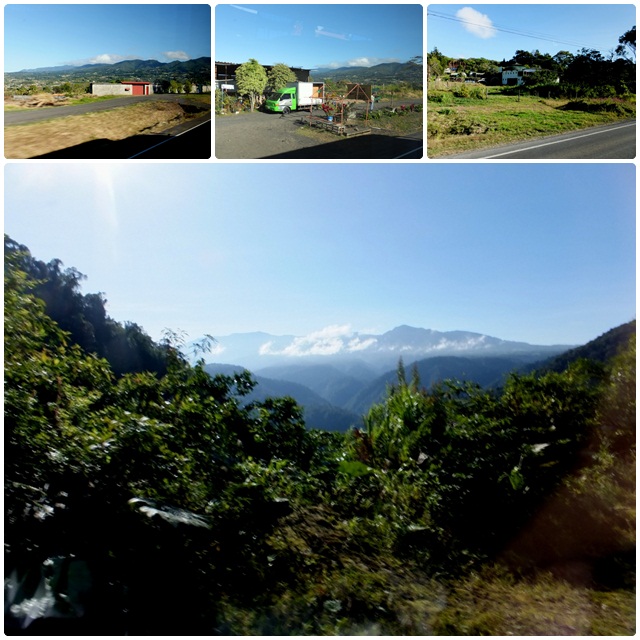 The volcanic landscapes of Costa Rica

Once we had passed the mountains we entered into Limon Province, Costa Rica’s Caribbean province. While we were driving, Karol explained that Puerto Limon, the province’s capital, is an important port city on Costa Rica’s Caribbean coast, particularly for the shipment of agricultural goods, especially bananas. The province of Limon has a large Afro-Caribbean population, most of which came here from Jamaica in the late 1800s to work on building the railroad from San Jose to Limon. Unfortunately, due to a very destructive earthquake in 1991, this railway line was destroyed and is no longer functional. 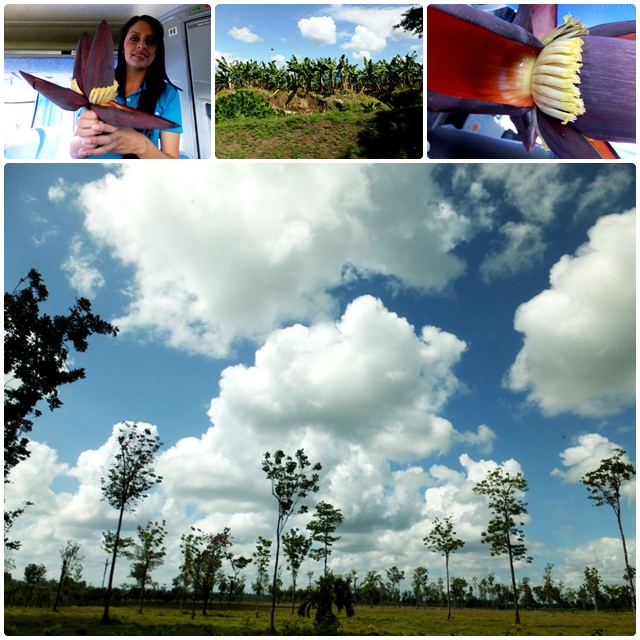 Landscapes of Limon province and a banana flower

Around mid-morning we stopped in the town of Guapiles where we had some fresh fruits and refreshments in a restaurant that featured a butterfly garden. Approaching the entrance to the garden, we were greeted by a “human frog”, a young woman dressed up in a frog costume who was performing some rather amazing contortions. Two attractive young ladies were dressed up in traditional Costa Rica dresses and welcomed everyone to the garden. Karol explained that Caravan Tours hires many university students for dance performances or other tourism-related activities, and provides a lot of local employment. 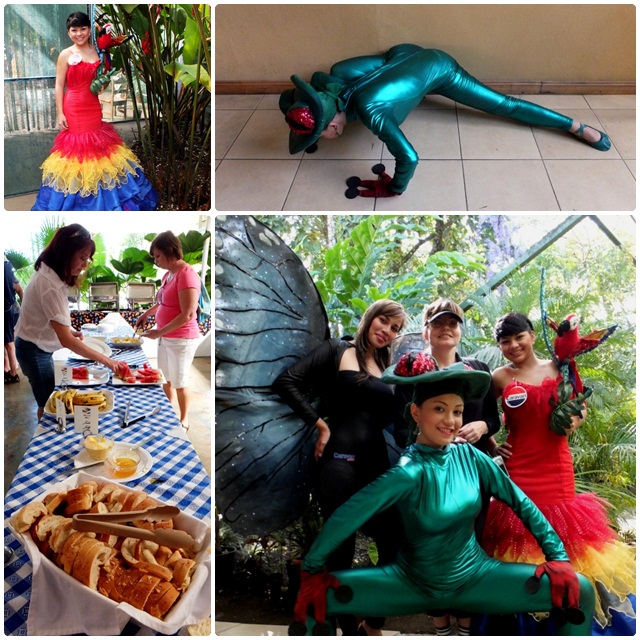 Entertainment at the butterfly gardens

Inside the butterfly garden, we were surrounded by a variety of different fluttering creatures. Several owl-eyes (butterflies with big brown “eyes” on their wings) were hanging from coccoons; a yellow-green malachite butterfly and a black and red postman butterfly were enjoying some banana pieces. An injured Blue Morpho butterfly was lying on the ground. The Blue Morphos, with their iridescent electric-blue wings, in particular, had me absolutely captivated, but they were constantly flitting about and impossible to get a picture of. Karol also pointed out a plant call “hot lips” which had an astonishing resemblance to Mick Jagger’s most famous body part. 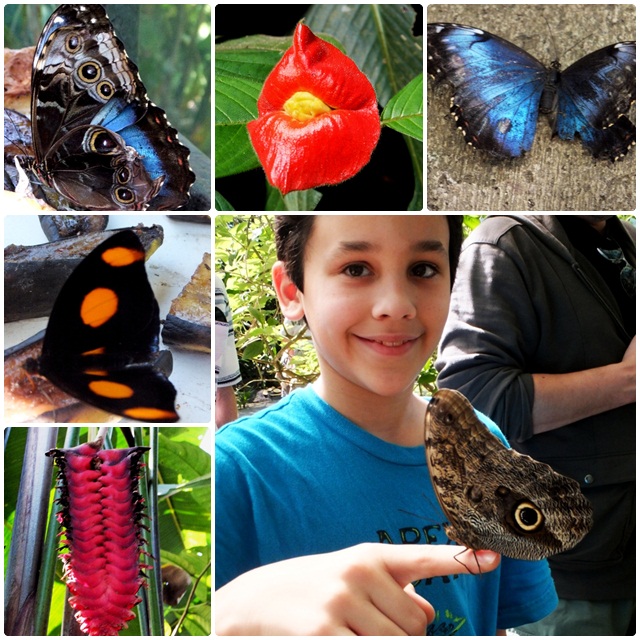 Back on the road, we started to see many banana plantations until we arrived in the tiny village of Pavona where we had to exit the bus and transfer to smaller boats with about 20 people. Apart from flying in, a boat ride is the only way to get into the Tortuguero National Park, which was our destination for the next two days. First the Penitencia River was wide and winding, and later on it became narrower and more overgrown with tropical rainforest. An adventure in itself, it was a beautiful boat ride and it took us about 1.5 hours to get to our destination: Pachira Lodge in Tortuguero, a village most famous as a breeding location for sea turtles. As a matter of fact, “Tortuguero” means “place of the turtles”. 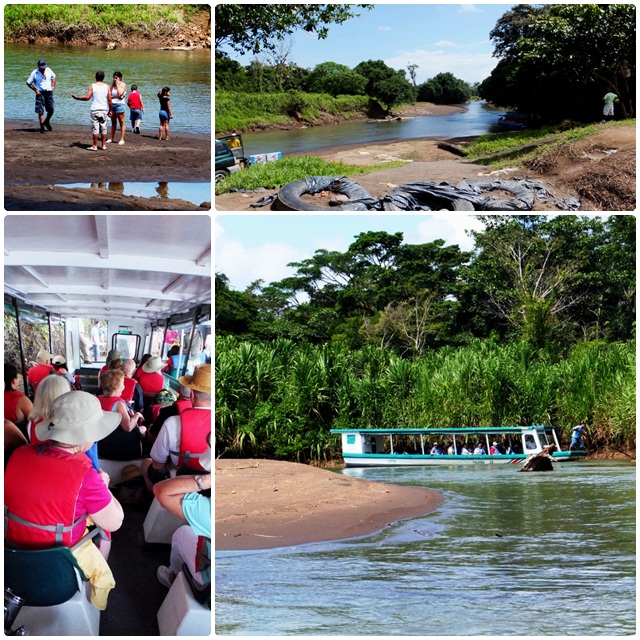 Our adventurous boat ride to Tortuguero

After landing we received a tropical drink, were welcomed by the manager of our eco-lodge and got the keys to our rainforest cabins. We had a comfortable wooden cabin with two double beds and a modern bathroom; not a television or telephone was to be seen in these cabins – perfect for relaxing inside the jungle. Internet was available in the main reception area for all those that just can’t get away from the wired world.

I took a quick walk around the resort which was very attractive with its wooden cabins, raised walkways, two pools and various sitting areas. In the far corner of the resort I came across a giant green iguana that must have been more than 2 metres (7 feet) long. It was a beautiful sight and was sitting there and eating, not overly shy. Overhead, the howler monkeys made their distinctive noises, a throaty roar that sounds a bit like dogs barking. In the tree canopy, a tucan was enchanting  travelers as he hopped from branch to branch. Colourful plants were everywhere; we definitely had arrived in a tropical paradise. 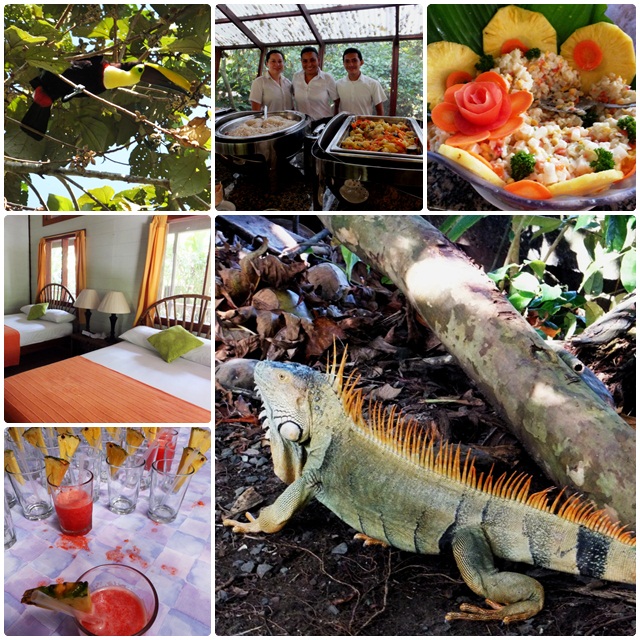 Then we had lunch in the big open-air dining room. The serving staff was extremely friendly and the salads had been decorated by some real artisans. Lunch was another opportunity to get to know more of our fellow travelers. We sat at a table with a couple from New York City who was originally from Russia, but they had been living in Brooklyn for many years. They got hit really hard by Hurricane Sandy in October of 2012 and neither FEMA nor their insurance company was going to help them with their damages. As residents of New York City, they also told us of their own personal harrowing experiences during 911. One of the advantages of a group tour is the opportunity to meet some interesting people, and this lunch was a great opportunity for that.

After lunch we were ready for our first excursion on the Caribbean Coast: a boat ride and visit to the village of Tortuguero.

Image Gallery from our trip to Tortuguero: