Dalmatia Travel: A Visit to Skradin and Sibenik

Until 1991, when it declared independence, Croatia was part of Yugoslavia. What followed were four years of a horrific war when the country was attacked by the Yugoslav National Army and an assortment of Serb paramilitaries. Croatia was recognized by the EEC and the United Nations in 1992 and won the war in 1995. Since then the country has been rebuilding itself. Today, there is very little, if any evidence left, of this armed conflict, and Croatia has returned to being a popular tourist destination. The Croatian coastline, in particular, is a very popular region for travellers and encompasses the peninsula of Istria in the north, the regions of Kvarner in the centre and Dalmatia in the south, a longitudinal strip on the mainland and a large collection of islands that includes the cities of Zadar, Sibenik, Split and Dubrovnik. 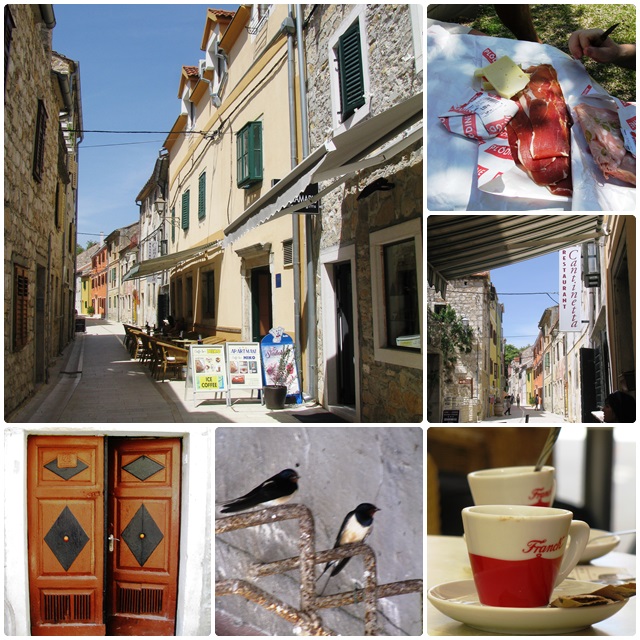 During our April 2012 stay in Dalmatia, our home base was Zadar in Northern Dalmatia and from here we made day trips to various other coastal and inland destinations of Croatia. After our April 29 morning visit to the magnificent Krka Waterfalls we stopped in the small town of Skradin on the Dalmatian coast of Croatia.

This pretty Croatian town was already settled in pre-Roman times and later changed hands between the Croatians, Ottoman Turks, Napoleon’s troops and Austria-Hungary. According to Forbes Magazine, Microsoft founder Bill Gates visits this town every summer and calls it his favourite vacation place. 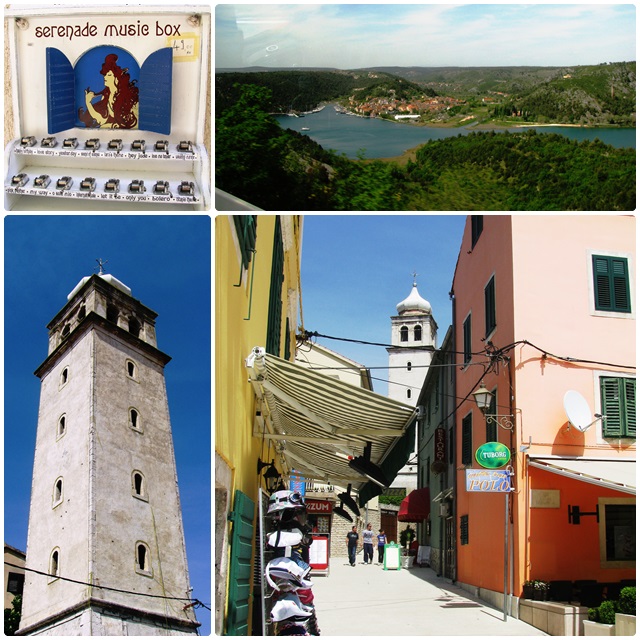 We started our stay in Skradin with a relaxing picnic lunch next to the river. We had purchased some delicious Croatian smoked meat, cold cuts, cheeses, vegetables and fruits in a Zadar supermarket and set up a big blanket on the grass next to the river. Sprawled out in the warm spring sun, we were ready to enjoy some local delicacies after our hiking trip to the Krka Waterfalls.

Then we took a stroll through the town, had a quick peek inside the local church and sat down in one of the local cafes and enjoyed a Croatian coffee. The town is very picturesque with its pink, orange and brightly green coloured facades. Steep stairs were leading up to the Fortress of Skradin and a few shops were selling souvenirs, although there were very few tourists here at the end of April. 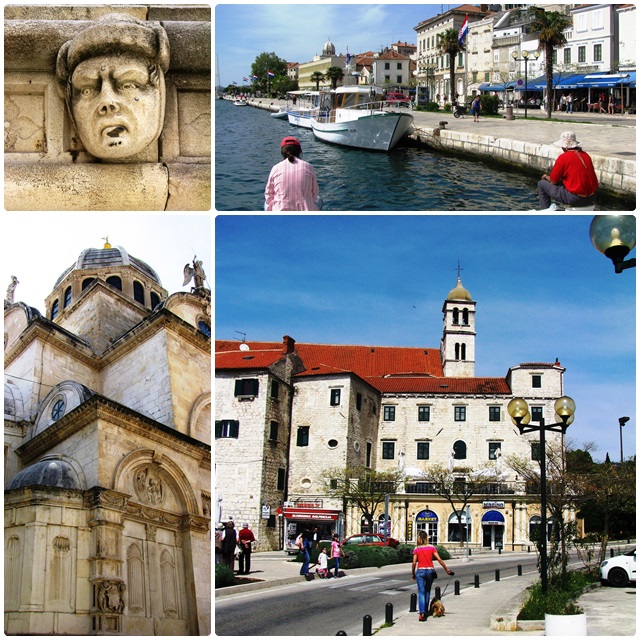 Sibenik has a beautiful waterfront

Towards the mid-afternoon we continued our Croatian explorations with a stop in the coastal city of Sibenik (Šibenik in Croatian), located where the Krka River flows into the Adriatic Sea. Sibenik is an important centre of tourism and a cruise ship port. The Old Town of Sibenik has been designated a UNESCO World Heritage Site and was under Venetian rule for almost 300 years, an era that left many traces in the local architectural heritage.

One of the most important historic structures is Saint James Cathedral, built in the Gothic and Renaissance styles. Constructed between 1431 and 1536, this church was built with stone only, without any kind of binding material or mortar. The damage that the church suffered during the Balkan War in 1991 has long been repaired. 72 human heads adorn the outside of the building and they are said to represent regular people, peasants, sailors and merchants who posed for the sculptors during the construction of the cathedral. 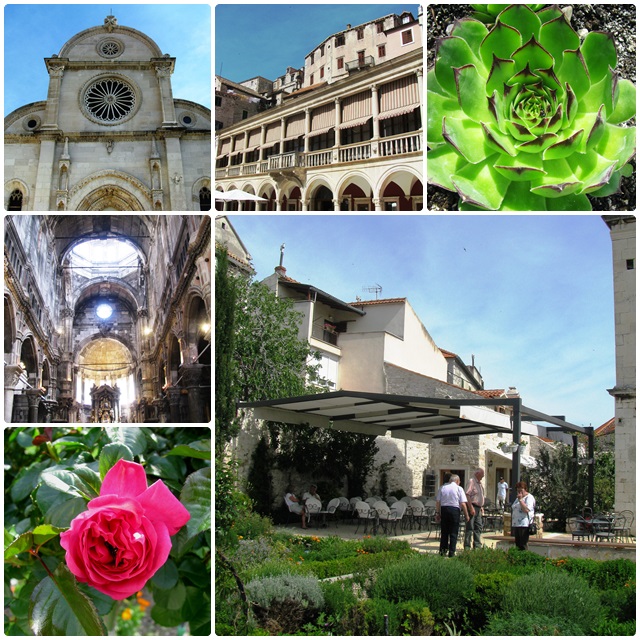 On narrow streets and stone steps we continued up higher into the town and visited the beautiful garden of the St. Lawrence medieval monastery. This garden underwent a major restoration in 2007 after having been forgotten for almost a hundred years. The garden features a collection of scented roses, a variety of blooming flowers as well as a section with medicinal plants and herbs.

We continued climbing ever higher on the narrow stone steps between the houses and made our way to the ruins of the medieval St. Michael’s Fortress. Located 70 meters above sea level, this fortification offers magnificent views over the harbour and the islands that are located in the Adriatic Sea, off the city’s waterfront. During archeological excavations it was determined that there was an Illyrian settlement here that dates back to the Iron Age. Many artefacts from the Venetian era were also located here. 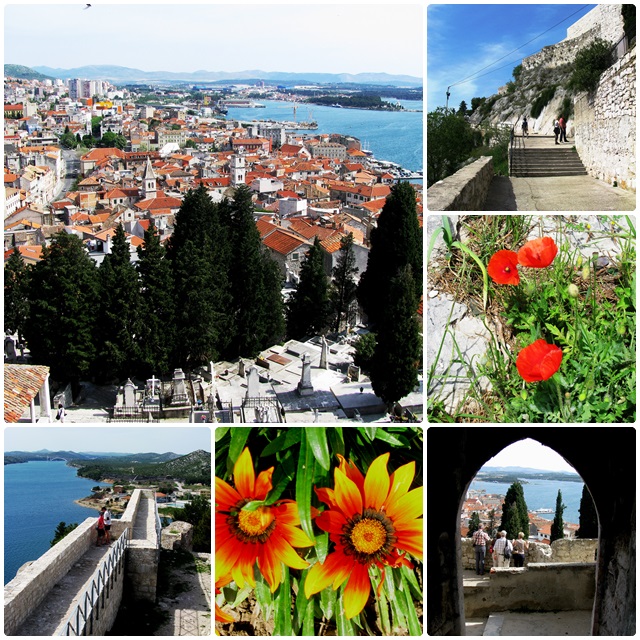 After taking in this gorgeous vista we headed down towards the waterfront again and enjoyed a coffee at one of the local cafes before we headed back to Zadar in the evening where my brother, ever the consummate chef, whipped up a delicious dinner with local ingredients, followed by a little jaunt into downtown Zadar to our favourite ice cream store for a nightcap.

Image Gallery of Skradin and Sibenik: