Lucerne in the Rain: Still one of Switzerland’s Jewels

After a few gorgeous hours on Lake Lucerne, it was now late afternoon on May 9, 2013, when I finally drove into Lucerne. As I was driving, dark clouds rolled in and it started to pour. I thought to myself, “what a shame”, as Lucerne is one of Switzerland’s most scenic larger cities. Lucerne is the largest town in Central Switzerland and has a long history. Starting as a small fishing village, it started gaining in importance in 1220 AD when the St. Gotthard mountain pass opened up. Lucerne has been one of the Catholic religious strongholds in Switzerland and over the centuries had many political and religious conflicts with the surrounding reformist regions. I was looking forward to exploring this historic city.

Following a soggy drive on the highway I got into town, conveniently parked my car underground at the train station and started exploring, the camera in one hand, and the umbrella in the other. I had seen images of Lucerne many times in the past, and I have to admit, the grey, wet and dreary atmosphere did not do this jewel of a town justice. It was such a pity that the rainy weather did not allow me to see this gorgeous city in its full glory. 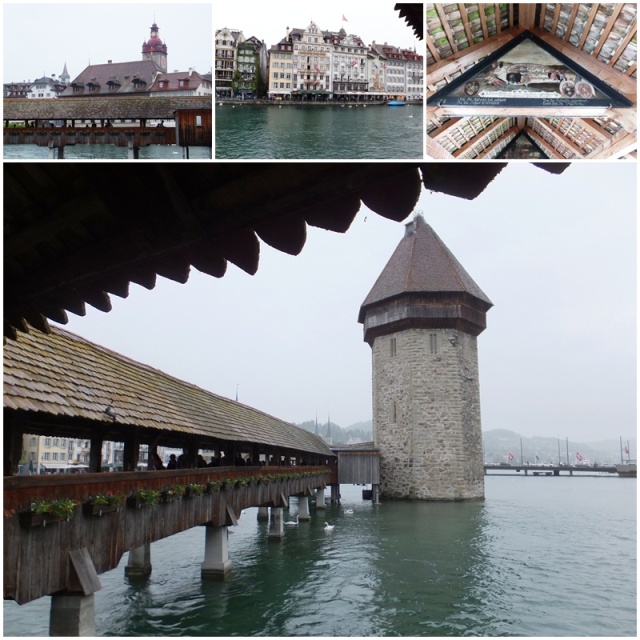 Lucerne’s most famous icon is the Chapel Bridge which runs diagonally across the Reuss River and is said to be the oldest wooden covered bridge in Europe. It was built in the 14th century and had to be rebuilt in 1993 after a fire destroyed most of the original bridge. It actually was part of the town’s fortifications and protected the citizens from attacks coming from the lake. The octagonal tower in the middle of this bridge, the Wasserturm (“water tower”), has actually served a variety of different purposes in the past, and has functioned as a lighthouse, a treasury and a prison.

Despite the bad weather, the Chapel Bridge was packed with international tourists who were trying to get the most out of their time in Lucerne. Once I had reached the northern shore of the Reuss River (which continues into Lake Lucerne), I arrived at the Kapellplatz, which links up with the Schwanenplatz, two important historic squares in this city. 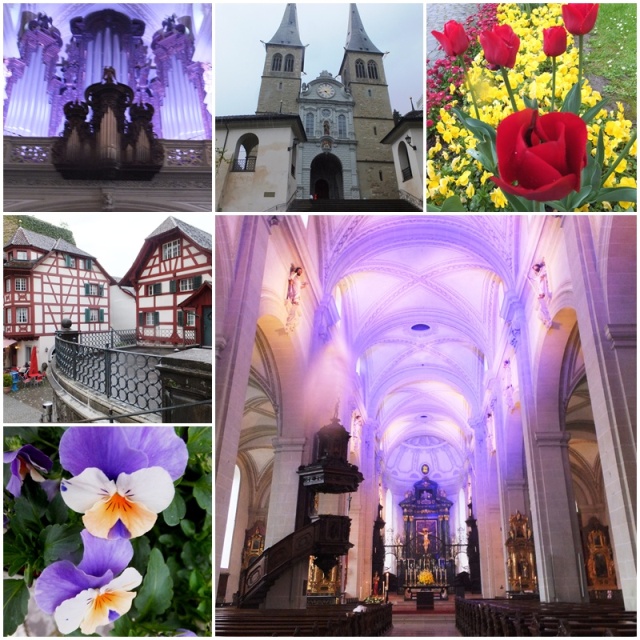 I continued a little farther and arrived at Lucerne’s Hofkirche (the Church of St. Leodegar) , one of the city’s architectural jewels. Built in the 1630s on the foundation of an earlier church, it is one of the largest churches from the German Renaissance period. Already in the 8th century AD, an abbey stood in the Hofkirche’s location. The current church holds many artistic treasures and is one of the symbols of Lucerne.

From the Hofkirche I continued my rainy walk through Lucerne and visited the Löwenplatz (Lion’s Square) which is not far from Lucerne’s famous Löwendenkmal  (Lion Monument).  On this square is also a large round building that holds the Bourbaki Panorama, a giant round building that is home to an immense circular mural that was painted in 1881. The panorama is 112 metres long and 10 metres high and shows the French army crossing into Switzerland at the end of the German-French War in 1871.

I had been looking for the Lion Monument for a while and although I saw a variety of signs for this iconic monument, the trail went cold and I was unable to find it. So I made an executive decision in the clammy wet weather and chose to head inside a café and warm up with a hot drink instead. 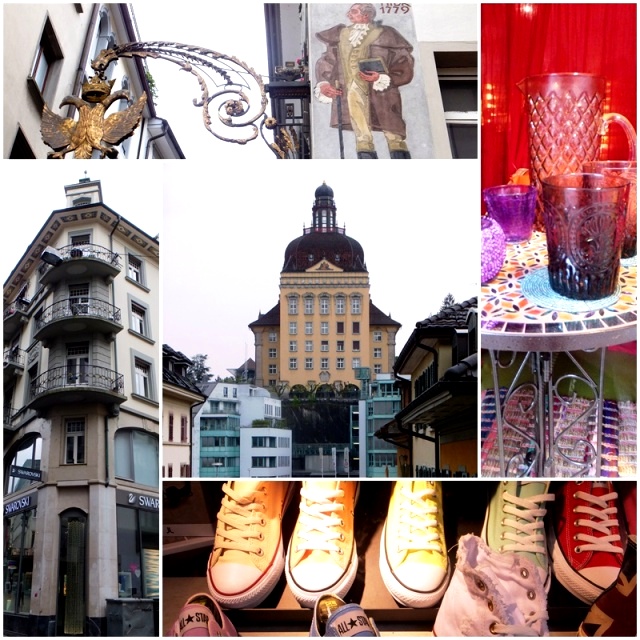 Lots of shopping opportunities in Lucerne

After a bit of a rest I continued my sightseeing. Old Lucerne has many narrow streets that are full of all sorts of boutiques, restaurants and shops. Switzerland is one of Europe’s wealthiest countries, so retail and restaurant prices are a little steep for most non-Swiss travelers. Looking at some of the prices in the display windows and the restaurant menus, I got quite the sticker shock and realized that prices were at least twice to three times of what I was used to in Canada. But there is no doubt that Lucerne has some great shopping opportunities for well-heeled clients.

I walked across the Old Town on the Hertensteinstrasse until I arrived at the expansive Mühlenplatz (“mill square”), next to the Reuss River. I crossed the fast-flowing river on another covered wooden bridge, the “Spreuerbrücke”. This bridge was mostly destroyed by flooding in 1566 and completely rebuilt. The bridge contains 67 painted wooden panels from the 17th century which depict the Dance of Death and culminate with Christ’s triumph over Death on the south side of the bridge. 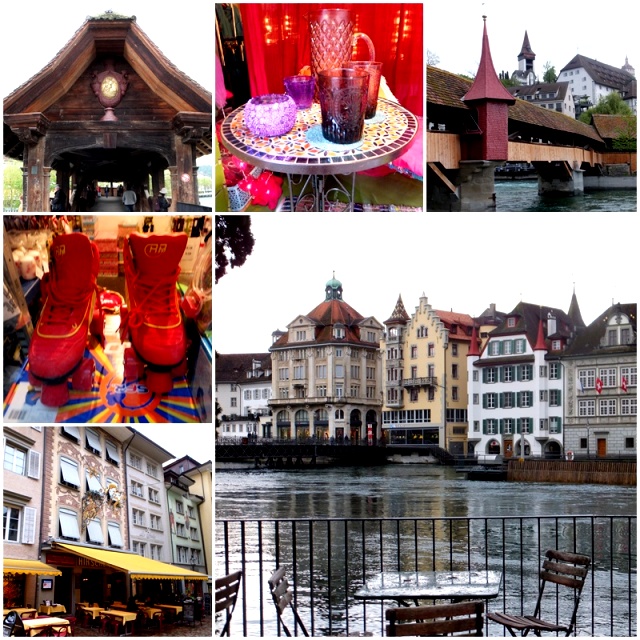 The famous Spreuer Bridge and views of Old Lucerne

After crossing the Spreuer Bridge I visited the Jesuitenkirche (Jesuit Church), a beautiful large Baroque church on the left bank of the Reuss River. Then I crossed the river once more on the Rathaussteg (City Hall foot bridge), and admired Lucerne’s medieval town hall which also holds a brewery and a restaurant. By now I was quite soaked from my rainy explorations and longed to get back to my warm hotel room.

As a pragmatic traveler on a tight budget, I picked up some snacks in the shopping mall below the train station and bid Lucerne adieu in the hope of seeing this city again in the future, on a better day. Regardless of the weather, Lucerne is one of Central Europe’s most beautiful cities, and even in the rain it had a distinct charm. 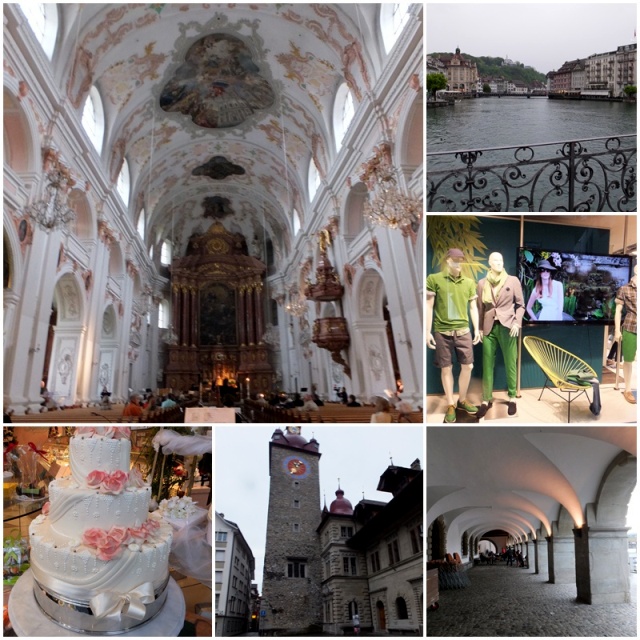 The Jesuit Church and City Hall