Following a soggy evening in Lucerne, I checked out of my hotel in Beckenried and got on the highway during the morning of May 10, 2013. The first thing that surprised me was that the turnoff from Lucerne to Interlaken actually happened in the middle of a reasonably long tunnel. Swiss mountain engineering and road construction techniques continue to fascinate me. In the rain I continued over a mountain pass, went past the Lungerersee Lake and continued further southwest towards Brienz. By the late morning I had arrived in Interlaken, my home for the next four nights. I was staying at the comfortable Hotel Chalet Swiss, a traditional Swiss-style hotel with 150 years of history.

Interlaken is one of Switzerland’s most famous resort towns and I had chosen it because of its central location in the Bernese Oberland, one of Switzerland’s most iconic regions. Interlaken is nestled between two lakes (Lake Brienz and Lake Thun) and provides a perfect starting point for excursions into the Bernese mountain range, which include the famous Jungfrau, Mönch and Eiger mountains. Erika Mattle, a professional guide for the Jungfrau Railways company, was my personal guide for the day and gave me a great overview of the whole area. 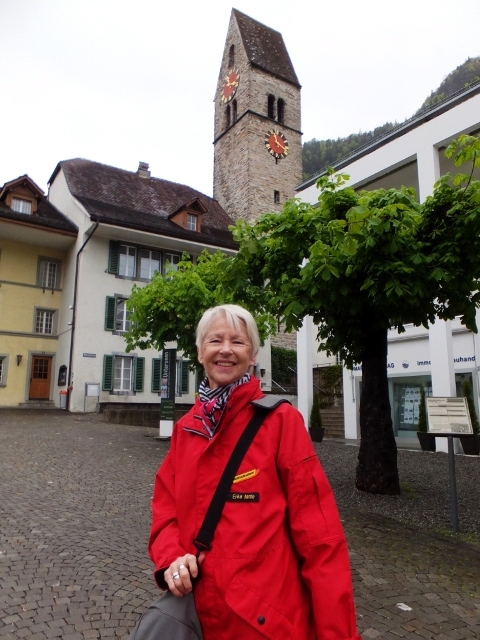 We started walking from  the Hotel Chalet Swiss, into town, and Erika explained that we were first walking through Unterseen, a neighbouring community of Interlaken that historically had a long-standing rivalry with Interlaken. Both municipalities are located on the Bödeli, the flat area between Lake Brienz and Lake Thun which are connected by the Aare River. While Interlaken was historically associated with the Interlaken Abbey, Unterseen was linked with the Bernese aristocracy, making the two towns long-term rivals. Both towns have an ibex (a mountain goat with long rounded horns) in their coat of arms. 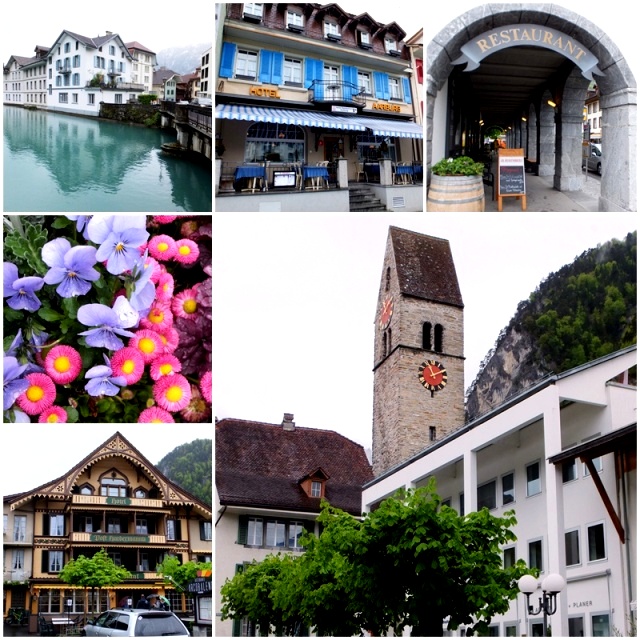 The historic town of Unterseen

Having been awarded official town status as early as 1279 AD, Unterseen has a lovely little town square. The town actually burned down twice and was completely rebuilt after 1470. The River Aare separates Unterseen from Interlaken, but the two are connected by several bridges, including two covered wooden bridges that were built in the 1800s. Erika also took me to another special place: Unterseen’s historic outdoor swimming pool, the Bödelibad, which was built in the 1930s and today is a protected historic structure. Having grown up in this area, she still remembers going to this public swimming pool when she was a teenager. 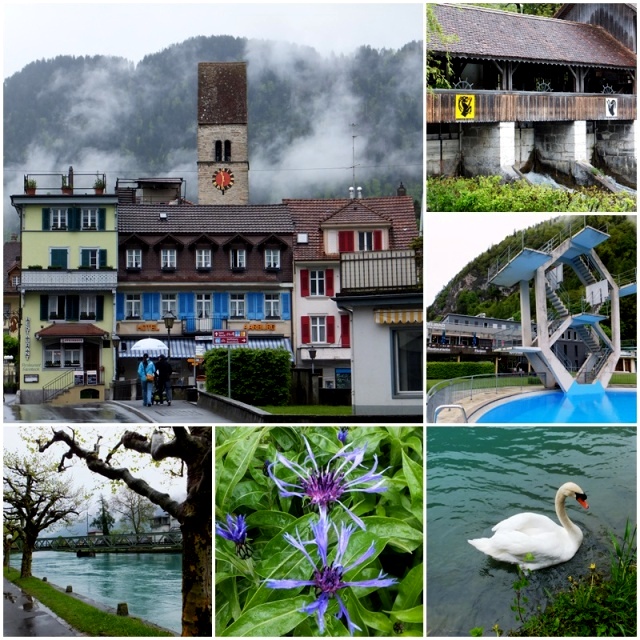 Then we crossed the Aare River into Interlaken and reached the Casino Interlaken which is anchored by the “Kursaal”, an impressive banquet hall that was part of the historic spa complex. Today part of a conference centre, this historic structure is surrounded by a beautiful garden that was in full bloom.  There was a pharmaceutical trade show going on inside the Kursaal – Interlaken is also a popular destination for conferences and meetings. 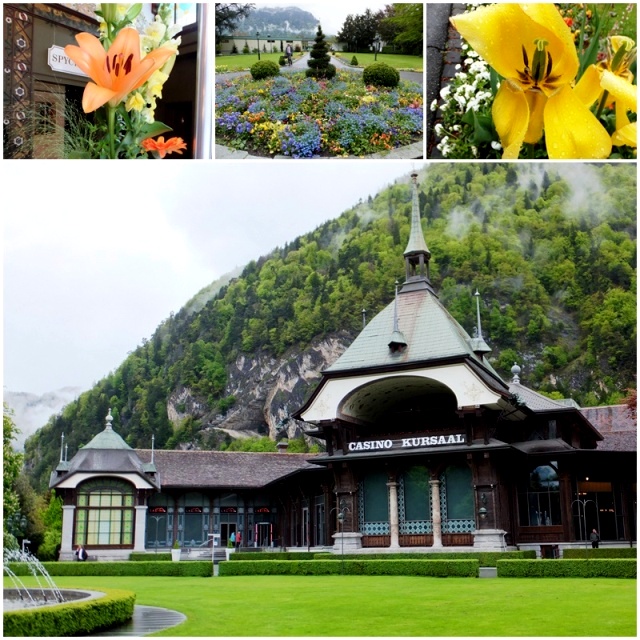 The historic Kursaal, now part of a conference centre

Erika and I continued our walking tour of Interlaken to the main street of town, the Höheweg, which is home to one of Interlaken’s most renowned icons: the 212 room Victoria-Jungfrau Grand Hotel and Spa, a luxury property that is part of the Leading Hotels of the World. As I am a huge fan of historic hotels, I suggested to Erika that we request a hotel tour, and the friendly people at the front desk connected us with the spa manager who graciously took us on a nice tour of the impressive common areas of the Hotel Victoria-Jungfrau.

This stately hotel has several elegant sitting rooms, an impressive curved staircase with an eye-catching fountain, and a breathtaking historic ballroom with amazing architectural details. On the other side of the hotel, a former ballroom has been turned into the award-winning Restaurant La Terrasse (disthinguised with 16 GaultMillau points) serving French cuisine, while two other restaurants, the Jungfrau Brasserie and Quaranta Uno, serving Italian cuisine, are also available to delight the guests’ palates. 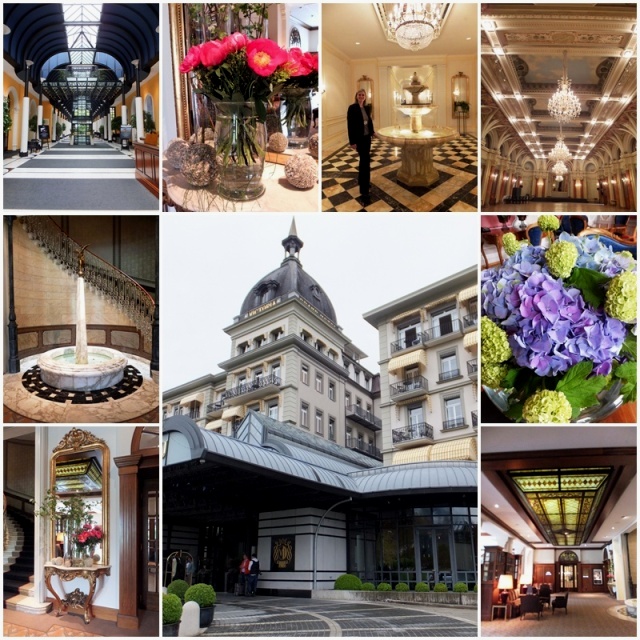 The iconic Hotel Victoria-Jungfrau in Interlaken

Protected as a historic monument, the first portion of this opulent hotel was opened in 1865 and was connected with the neighbouring building in 1899 via a central structure. During the Belle Epoque era, when many of the mountain railways had been constructed, Interlaken was experiencing an absolute tourism boom and this luxurious hotel has been serving an upscale clientele ever since.

Our next item on the itinerary was a trip with the Harderbahn, a historic funicular, to the top of the Harder Kulm to enjoy a mountain-top lunch.