My time in Austria came to an end on May 8, 2013 when my brother and sister-in-law dropped me off at the train station in Graz to catch the overnight train to Zurich. It had been wonderful to see them again and spend nine great days in my home country. As I was settling into my overnight train compartment I was thinking that saying goodbye is always a little sad, especially when you see your family only once a year.

A mother with her two daughters joined me with me in our four person compartment and soon we were on our way. As the sleeping compartment was very tight, I stayed in the regular train compartment and went to bed at about midnight. The rhythmic sounds of the train lulled me to sleep and by 6 am I woke up again as we were moving rapidly towards Switzerland. I quietly got up and went into the general train compartment, sat down and admired the Alpine landscapes that were passing by outside the window. Border officers arrived shortly after to inspect our passports as we entered Switzerland. 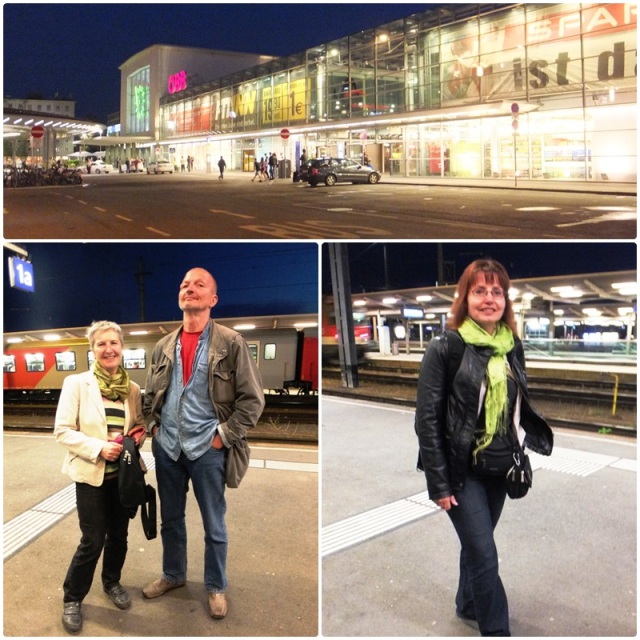 Punctually by 9:20 am we arrived at the train station in Zurich. I grabbed some maps from the tourist office, got directions on how to get to my car rental office and headed outside to the streetcar stop. A friendly middle-aged local saw me looking at my map and asked me right away, in decent English, “Do you need some help?” I gave the address of the Hertz Rent-a-Car office on Morgartenstrasse, and he promptly told me that it would be too far to walk with a big suitcase. So he showed me how to get a ticket for the streetcar and minutes later I was on my way. My first impression of Switzerland had been very positive.

I picked up my little Volkswagen Up!, a pleasant small family car that had good pep, got my instructions on how to get out of Zurich and just minutes later I was on the Swiss highways, driving southwest to Lucerne. My hotel was located a little bit southeast of Lucerne, in Beckenried, and it was not difficult finding my one-night accommodation. Seehotel Sternen in Beckenried is located right on Lake Lucerne, but looks a little outdated, with 1970s decor. I was told that the Internet wasn’t working either, but I guess it would do for a night close to Lucerne. 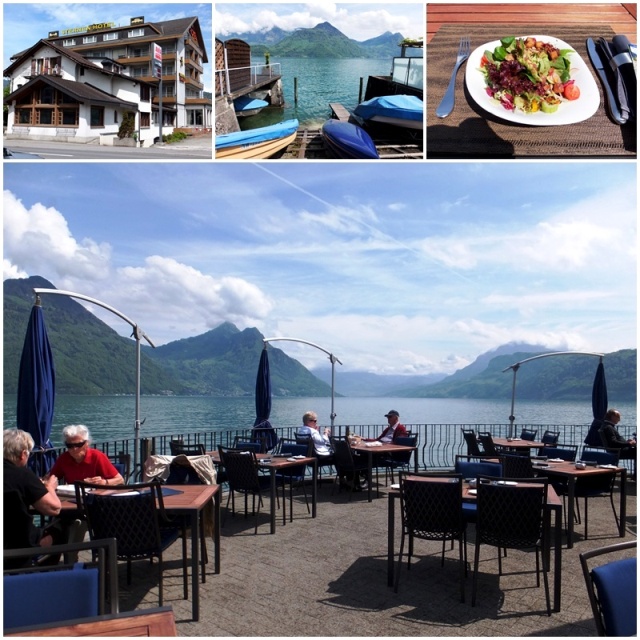 Check-in was at 3 pm, so rather than going into Lucerne, I decided to explore the local area around Lake Lucerne, or the Vierwaldstättersee, as this large lake is called in German. A helpful older lady who was waiting inside the hotel’s lobby took me across the street and showed me a map of Beckenried and recommended me to head to a restaurant called the Nidwaldnerhof to have lunch.

I easily found the restaurant and loved the lake-front location. I enjoyed a healthy mixed salad with some Swiss bread on the side and had a bit of sticker shock when I looked at the prices. Many of the dishes were between 40 and 80 Swiss Francs, (about $45 to $90) which is a bit steep for the average Canadian. I realized I was in Switzerland now and I had to get used to the higher price level in this wealthy country. The view, however, was absolutely phenomenal and I enjoyed my vegetarian lunch on the terrace of the Hotel Nidwaldnerhof. 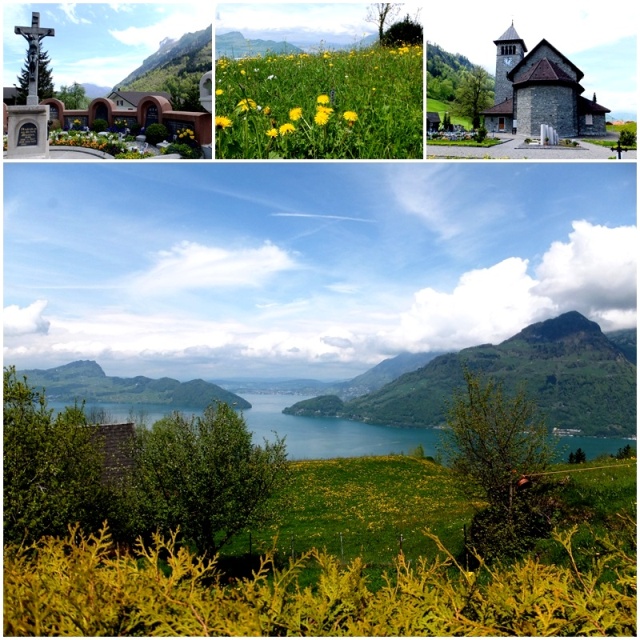 Since I still had a couple of hours left until check-in, I decided to continue driving further east along the shores of Lake Lucerne and I started to drive up the mountain to a quaint village called Emmetten. It has a great location in the mountains and offers a sweeping panoramic view over Lake Lucerne. Most of the area around here is dedicated to cheese production and forestry.

I continued on to the village of Seelisberg which is equally scenic, perched about 400 metres above Lake Lucerne. It is also the home of the Maharishi European Research University, an institution that focuses on transcendental meditation and Maharishi Vedic Science. The terrace of this university overlooks the southern part of Lake Lucerne and offers great views of the mountains on the other side of the lake. 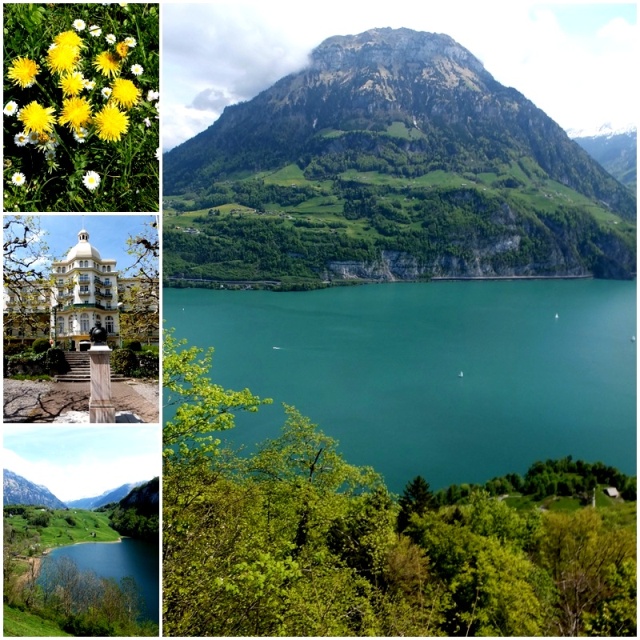 Seelisberg is a gorgeous little village

Seelisberg itself is quite a historic place. A parish church in Seelisberg was first mentioned in 1262, so this little village has been inhabited for a long time. The current church was consecrated in 1936. There are a few restaurants and hotels in Seelisberg, and happy cows are grazing on the meadows all throughout the village.

I started my drive back to Beckenried and by 3 pm I was all checked in and ready to explore Lucerne. 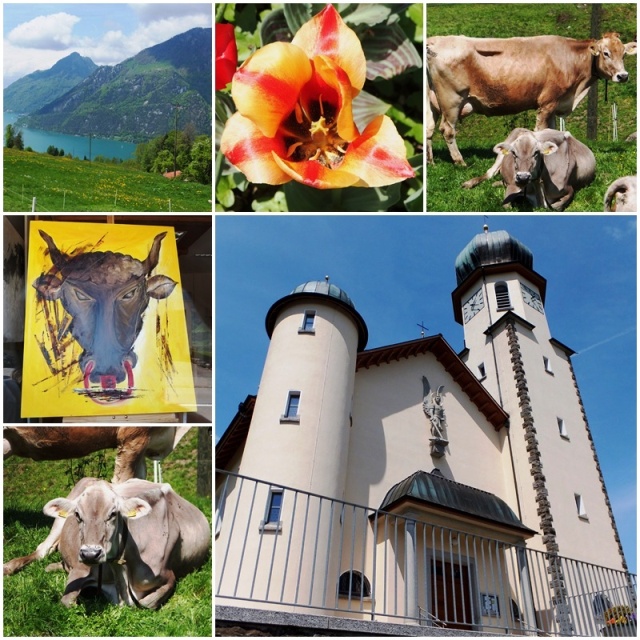