Interlaken Discoveries: Lunch on the Harder Kulm, Souvenirshop Zryd and a Chocolate Show

With our impromptu visit to the Grand Hotel Victoria-Jungfrau complete, we strolled by a series of historic hotels on the main street of Interlaken during our walking tour on May 10, 2013. Then we crossed the Aare River again to arrive at the bottom station of the Harderbahn Funicular. The Harder Kulm mountain is a small peak on the north side of Interlaken that is known for offering an absolutely phenomenal view of the Eiger, Mönch and Jungfrau mountains as well as of Lake Brienz and Lake Thun.  While we were waiting for the funicular to arrive we had a look at the “Alpenwildpark am Harder”, a small Alpine zoo that is home to a family of ibexes as well as a colony of marmots. Soon we would be whisked to the top of the Harder Kulm where we would enjoy a scrumptious mountain lunch. 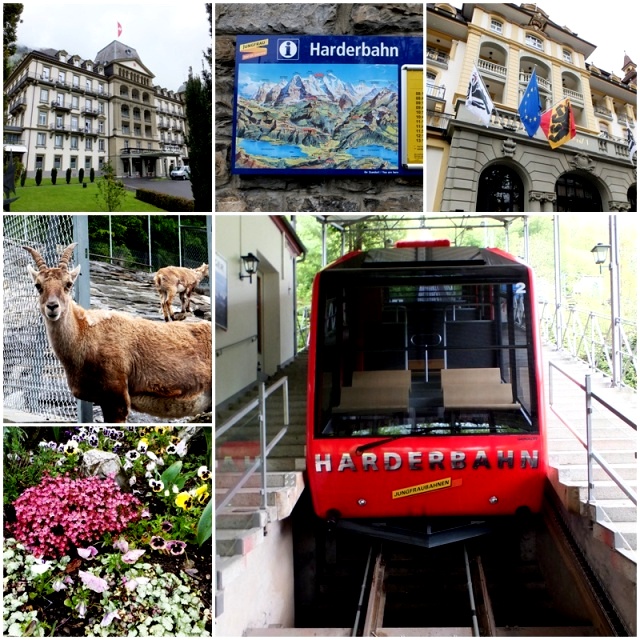 Taking the funicular up to the Harder Kulm

In the early afternoon, local expert Erika Mattle and I took the funicular up the Harder Kulm, the local mountain right next to Interlaken. It is famous for its gorgeous view of the Eiger, Mönch and Jungfrau mountains (all around 4,000 metres high or above), but on this day – nothing, no view at all. It had been drizzling all morning and now the fog was sitting in the valley and all we could see was a thick grey soup outside the restaurant’s big windows. It didn’t matter, we had a fabulous meal: Älpler Rösti (grated and fried potatoes), with tomatoes and cheese, accompanied by a delicious salad and some local Swiss cheese. These Swiss delights were followed by a delicious ice cream Sunday with fresh strawberries and whipped cream. This was definitely going to be my only meal for the day! Erika introduced me to a typical Swiss drink: Rivella, which is made from milk serum, but actually tastes a bit like ginger ale. 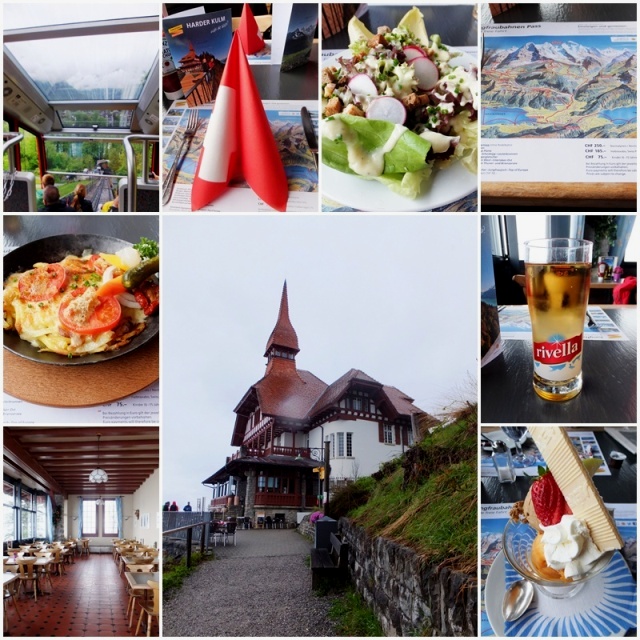 A real Swiss lunch on the Harder Kulm

After we had taken the Harderbahn funicular back into town Erika took me into one of Interlaken’s most popular souvenir shops: Zryd Souvenirs, run by Eveline Nobs-Zryd and her husband. Erika and Eveline had grown up together and we had a pleasant chat about unconventional travel destinations as Eveline was about to embark on a big trip. The store carries everything from hand-carved figurines, beer steins, Swiss flags, cow horns, dolls, Swiss army knives, cow bells, and red golf balls with the Swiss white cross to inlaid wood tables and chairs. It’s a true cornucopia of Swiss memorabilia. 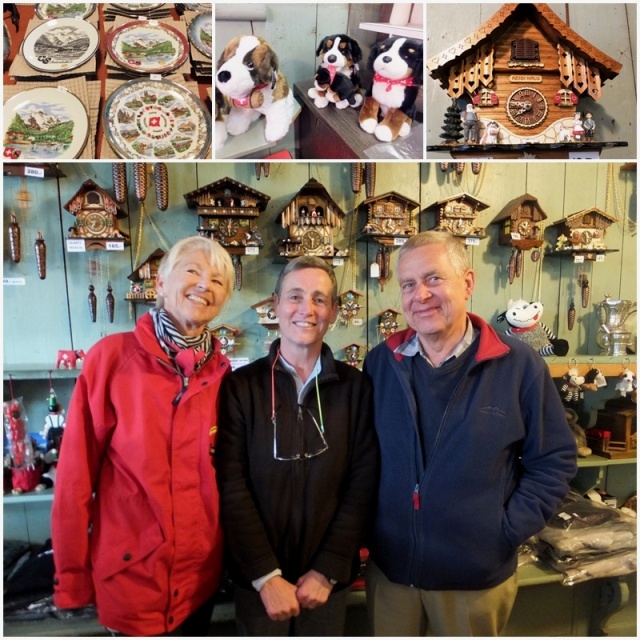 A visit to the Zryd Souvenir Shop

After saying goodbye to Erika, whose guided tour of Interlaken I had greatly enjoyed, I went into the Grand Café Schuh, to wait for the 5 pm chocolate demonstration. For many people, Switzerland and chocolate are inextricably linked, and a live demonstration of chocolate-making would introduce me to one of Switzerland’s most well-known crafts. The Grand RestaurantSchuh is composed of a chocolate and confectionary shop as well as a restaurant. It is one of Interlaken’s most historic hospitality establishments, having been in business since 1818. 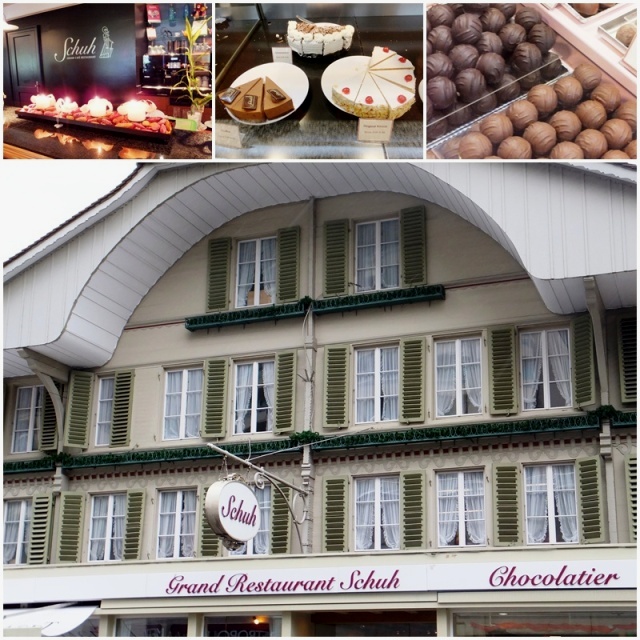 The Grand Restaurant Schuh, an institution in Interlaken

At 5 pm, I joined about 10 other people to watch the chocolate show, where young chocolatier Ludwig, a native of Munich, gave us a demonstration of how many of the delicious goodies at the Grand Restaurant Schuh are made. High quality fair trade chocolate comes from Ghana or the Ivory Coast and is processed into its raw materials by a local Swiss chocolate factory. The raw materials are then delivered here to make a wide variety of award-winning chocolates, including the iconic high-heeled shoes that the Grand Café Schuh (the German word for “shoe”) is famous for. We even got a few sweet treats while we were watching the show and experienced Swiss chocolate making first-hand. 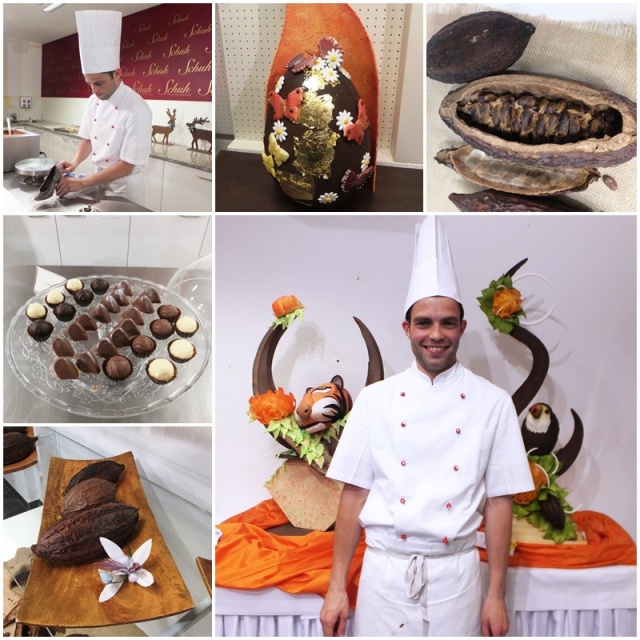 The famous chocolate show at the Grand Restaurant Schuh

On the way back to the Hotel Chalet Swiss, I took a stroll through the shops of downtown Interlaken. The town centre is home to many restaurants, bars, retail stores and hotels. Interlaken also has two train stations, the Interlaken East and West railway stations, which provide excellent train connections all throughout Central Europe. Trains would be a topic for the next day as well: a truly iconic trip was awaiting me: a trip via by mountain railway to the Jungfraujoch, the Top of Europe and Europe’s highest train station… 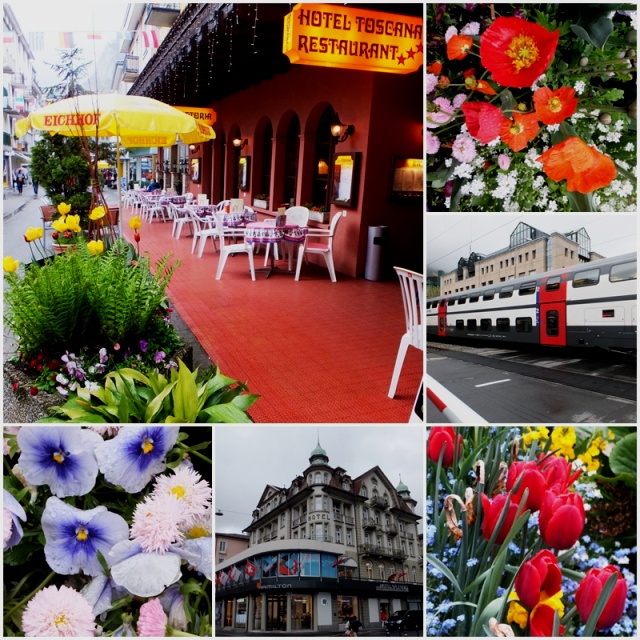