During my bicycle tour of Montevideo, Uruguay, on November 12, 2011, I cycled to one of the city’s most famous spots at noon time: the “Mercado del Puerto”. Built as a fruit market in the 1860s with cast iron structures manufactured in the “Union Foundry” in Liverpool, the building has the ambience of a Victorian-era train station in England. Today it holds numerous grills, bars and stores, and is extremely popular for the traditional Uruguayan meat dishes that are charbroiled here over open fires.

The building’s long history dates back to 1865 when local business man Pedro Saenz de Zumaran was considering to build a market and bought some land by the Bay of Montevideo. A decision was made to use an iron skeleton construction technique which is similar to the later technique used in the Eiffel Tower. The wrought-iron structure of the building was fabricated by the Union Foundry in Liverpool, and then was shipped across the Atlantic Ocean, along with some specialized blacksmiths to assemble it.

Finally in 1868 the market was officially opened with big fanfare by the President of Uruguay. Originally it provided fruits, vegetables and meat that arrived in the harbour of Montevideo. Butchers and green grocers came later. 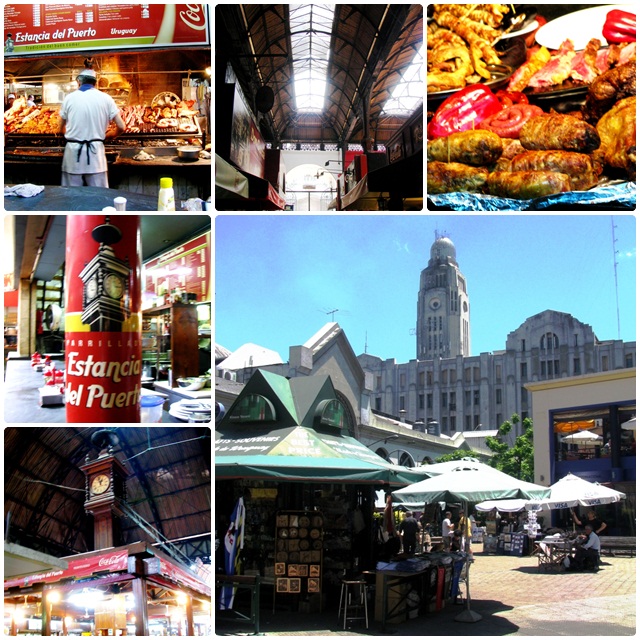 As one of the main destinations in Montevideo, Uruguay, the market has seen visits by some well-known celebrities. Carlos Gardel, the famous Argentine tango singer and songwriter, paraded through this market as well as world-renowned Italian tenor Enrico Caruso.

Today, the Mercado del Puerto is no longer a market, but a local culinary destination that is full of “parillas”, essentially a South American steakhouse where all sorts of meats and sausages are grilled over charcoal on an open grill. There are also a number of souvenir shops inside the market.

At the parillas, the meat is grilled very slowly, resulting in a tender and juicy texture. One word of warning to those who, like me, don’t eat dark meat or have stronger preferences for vegetarian fare: the smoked smell of grilled meat inside the building is very potent, so if your tender vegetarian nose is not used to these smells, it’s better to cut the visit short and spend more time on the big plaza outside the market building. Meat eaters, on the other hand, will believe they have died and gone to heaven here. Like everywhere in the southern part of Latin America, beef rules here and is said to be of some of the highest quality in the world. Because this is a major tourist destination, expect to pay substantially more here for your meal than in other parts of the city. 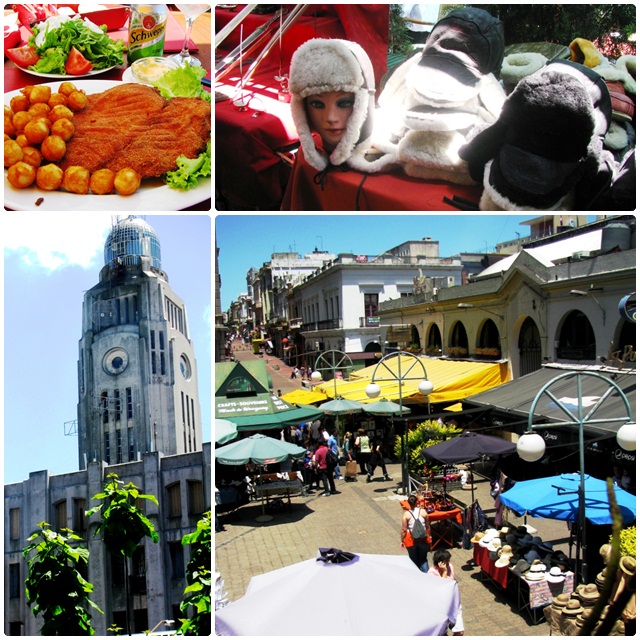 Rather than sitting inside the smoky market, I decided to cross the street and sit down on at a restaurant a second story balcony facing the Mercado del Puerto. From there, I had a great view of the square below me and I could enjoy the fresh air. I had a delicious lunch featuring a “milanesa de pollo”, a very tasty thin slice of chicken schnitzel accompanied by some delicious potatoes and a healthy salad.

Now that I had strengthened myself with some authentic local fare, I’d be able to continue my discoveries of Montevideo, Uruguay. The Ciudad Vieja, the Old Town, was waiting for me.