Naples Travel: The Chiaia Area and a Guided Tour of the Tunnel Borbonico

After our stroll along the Lungomare, on the way back downtown, we walked along the Via Chiaia, one of Naples’ most important shopping streets with many elegant shops. It was evening now, the hour of the “passegiata”, a traditional ritual in Italy when people head out for a stroll, dressed in their finest. Towards the western end of the Via Chiaia is a triumphal arch that was built in 1636 and several historic churches line this historic thoroughfare. 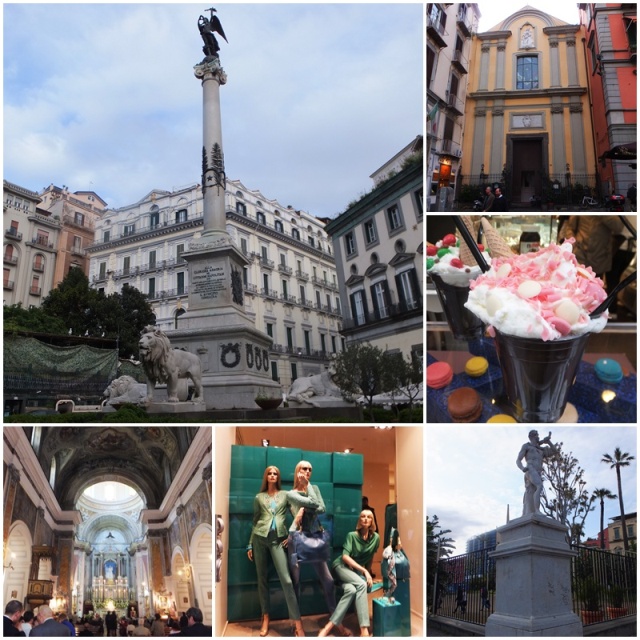 Impressions of the Via Chiaia

In the evening we made it back to the huge Piazza del Plebiscito. We walked inside the Basilica di San Francesco di Paola. This massive church with the round dome is reminiscent of the Pantheon in Rome, one of my favourite buildings. The interior of the rotunda measures 34 metres, surrounded by 34 Corinthian columns that carry the main cupola which has a height of 53 metres. This impressive Neo-Classical church was consecrated in 1836.

In the evening, local expert Nino Pezzullo had organized a special outing in Naples: a guided  visit to the “Tunnel Borbonico”, the Bourbon Tunnel, part of the extensive system of underground tunnels in Naples. This tunnel was originally built as an escape route in 1853 by the Bourbon King Ferdinand II and held cisterns for water collection. The Bourbon monarchs were afraid of the rebellious temperament of the Neapolitan populace and felt it necessary to build an escape tunnel to be able to reach safety in case of an insurrection. The tunnel is also connected to a 17th century Carmignano Aqueduct system that used to supply water to the Monte di Dio district until that 1860s. The yellow tufa stone of Naples is riddled with a fascinating system of underground structures. 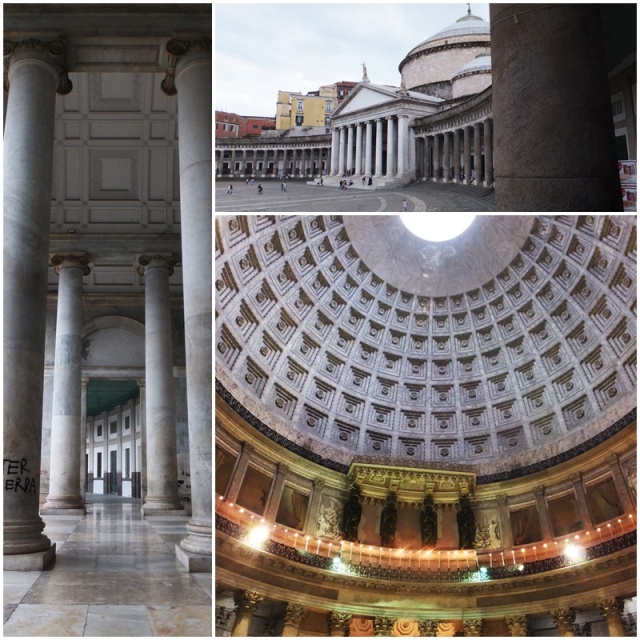 During the Second World War the Bourbon Tunnel was used as a bomb shelter and thousands of people lived here to escape the aerial bombardments that were ravaging the city. Folding beds, handwritten messages and antiquated spartanic shower areas still testify to this frightening era.  The tunnel was also the location of a military hospital. Naples was the most bombed city in all of Italy during the Second World War.

We descended 33 metres down a staircase and entered a fascinating underground world that had been covered in rubbish and forgotten for several decades until being rediscovered by a university professor and a team of volunteers just a few years ago. These volunteers have been working hard in recent years to remove the garbage and unearth this fascinating underground hideout. They even donated their own money to equip the tunnel with electricity and lighting. 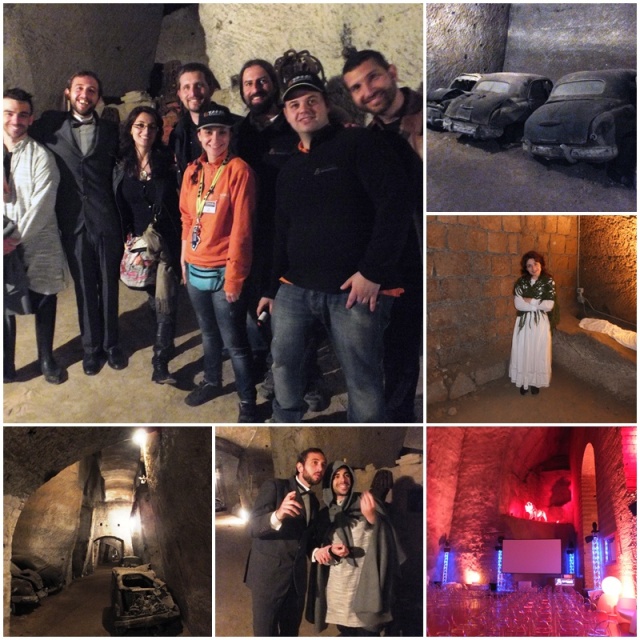 After WWII, the tunnel became a municipal impound lot that held cars and scooters, and many of these vintage vehicles can still be seen today. The entire structure was re-discovered in 2008 and excavated by a group of dedicated volunteers of the Associazione Culturale Borbonica Sotteranea. In our guided tour there were several actors who brought to life stories from the Tunnel Borbonico; they illustrated the life of the “pozzari”, the workers who operated the water supply system, as well as dramatic stories of local residents who sought shelter inside the tunnel during the bombings of WWII . Today the tunnel is even used for art exhibitions, musical events and special performances. The story behind the rediscovery of this tunnel was just amazing and I was amazed at the commitment and dedication of the volunteers. This guided tour was a real highlight of my time in Naples.

After this fascinating tour we emerged in an underground parking lot at Via Morelli and marveled at what we had just seen. We strolled back to the Lungomare and admired Naples’ waterfront at night. The Castel Nuovo, also called Maschio Angioino, is one of the most famous buildings of the city and construction started in 1279 under King Charles I of Anjou. Charles ordered a new castle built when the capital of his kingdom was moved from Palermo to Naples. The castle has five cylindrical towers on a trapezoidal layout that all face the courtyard. 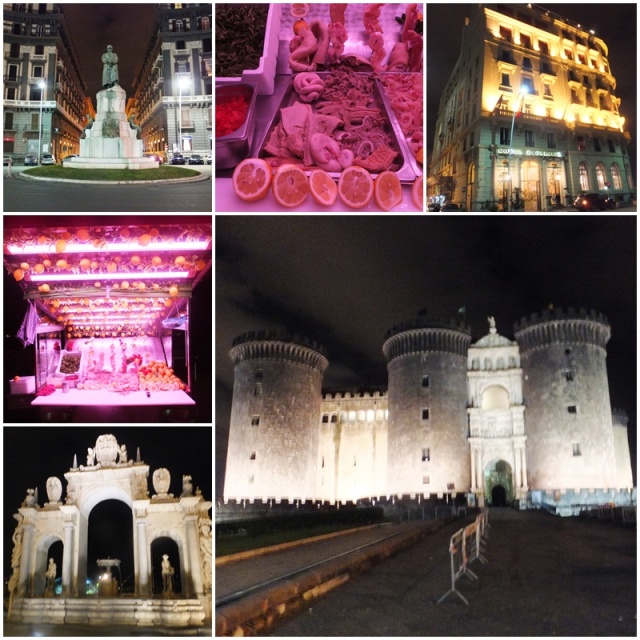 The Lungomare and Castel Nuovo at night

Shortly after, my local expert Nino and I arrived back at the underground car park where he had parked his vehicle. We picked up his car and drove about 20 minutes to the small town outside of Naples where his residence is located. It was almost midnight when we arrived and I sat down, exhausted from 11 hours of sightseeing on foot in Naples. Nino fed me some delicious local mozzarella, fresh asparagus and wild strawberries. Thanks to Nino’s hospitality I had spent a wonderful full day in Naples that would be followed by another day of sightseeing on my last day in Italy. 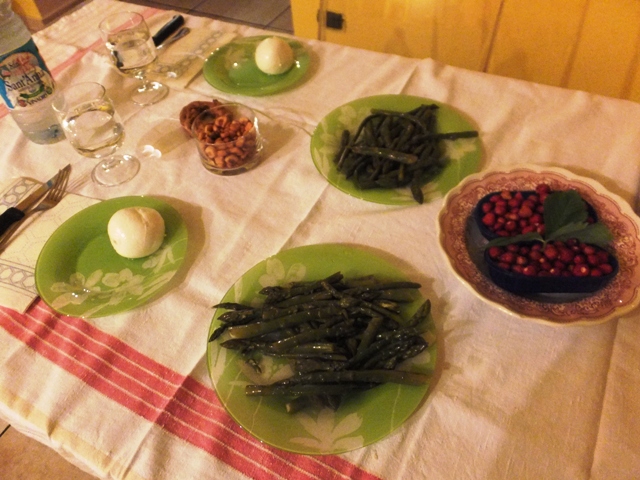 A delicious dinner at the end of a long day