Before heading off for my planned excursion to Cornell University, we started our second day in Ithaca in the Finger Lakes with a nice home-cooked breakfast in our self-contained apartment that we had rented through AirBnB. Deer were grazing outside our neo-Classical mansion and the chickens in the back of the house were busy laying eggs in their chicken coups. The serene country mansion that we had stayed in turned out to be a good home away from home for our explorations around Ithaca.

For our morning program we drove into town, to the shorelines of Cayuga Park where we played tennis in Stewart Park. A group of Capoeira dancers was practicing next to us on the tennis courts while we enjoyed a good practice session, looking out over the lake on a gorgeous late August day. After all this exercise, we took a rest on a bench next to the Lake and looked over at the Allan H. Treman State Marine Park on the southwestern tip of Lake Cayuga which is home to one of the largest inland marinas in all of New York State. 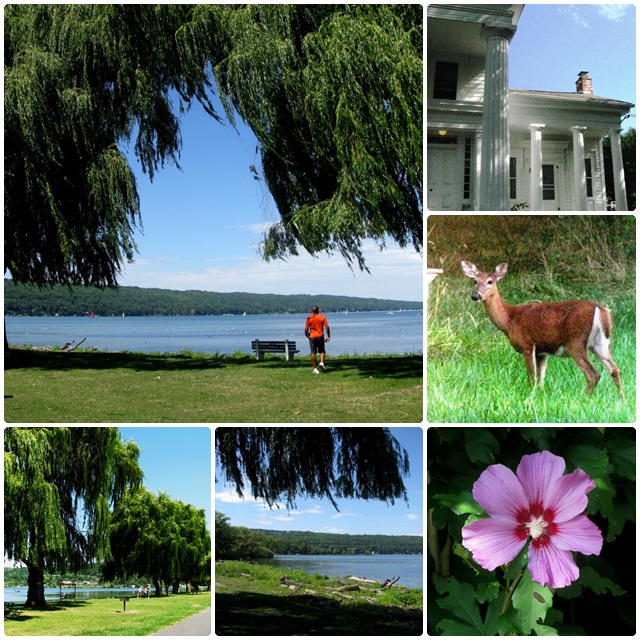 Then we drove downtown where I rented a bicycle again at the Outdoor Store inside the Ithaca Commons pedestrian mall. For the next few hours I was planning to explore the campus of Cornell University, Ithaca’s most famous institution. Cornell alumni include well-known people such as Christopher Reeve, Robert Atkins (inventor of the Atkins Diet), Henry Heimlich (creator of the Heimlich maneuver), former US Attorney General Janet Reno and US Supreme Court Justice Ruth Bader Ginsburg. The list of Cornell graduates includes countless high-powered CEOs, researchers, writers and other prominent people in the United States.

Cornell University was founded in 1865 by Ezra Cornell, a senator who donated both his farm and seed capital of $500,000 to start the university. The university grew substantially since the Second World War, and today Cornell is among America’s Ivy League universities with highly reputable schools of agriculture, architecture, engineering, hotel management and veterinary studies. 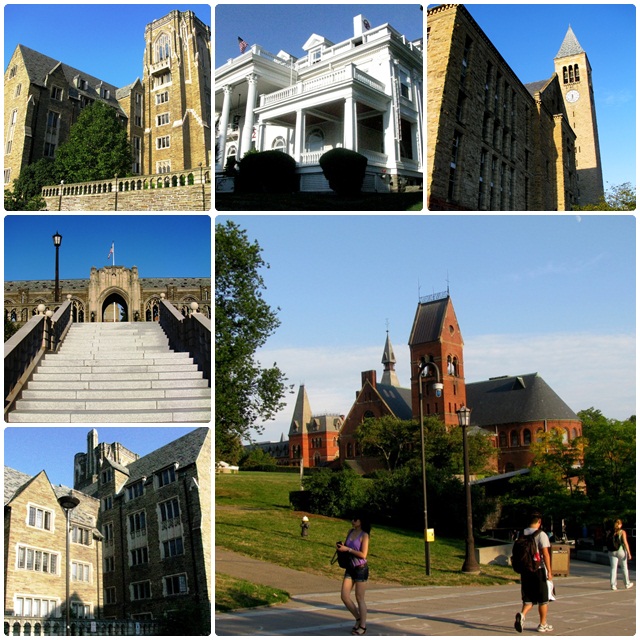 The location of Cornell University’s main campus on the hill overlooking Ithaca from the east is fantastic. It’s a bit hard getting up to the top by bicycle, but the pushing was definitely worth it and I got rewarded with a phenomenal westwards view over Ithaca, Lake Cayuga and the rolling Finger Lakes region. The 745 acre (3 square kilometer) campus of the university is impressive: it is home to a large number of imposing buildings from the late 1800s and early 1900s and the architectural styles range from Collegiate Gothic and Victorian designs to more austere international and modernist buildings. The university campus is definitely an inspiring place, and the roughly 21,000 undergraduate and postgraduate students studying here should definitely enjoy their attractive environment.

The topography surrounding the university is also quite stunning: Cornell University is surrounded by two gorges: Cascadilla Gorge and Fall Creek Gorge. As a matter of fact, Ithaca itself is known for its waterfalls and steep valleys which have given the city the tagline “Ithaca is Gorges”. There are more than 100 waterfalls and gorges within 10 miles (16 km) of Ithaca’s downtown, which will enchant nature lovers. The combination of Victorian architectural heritage, picturesque Lake Cayuga and the surrounding hills with their waterfalls and gorges makes Ithaca a very scenic getaway destination in New York State. 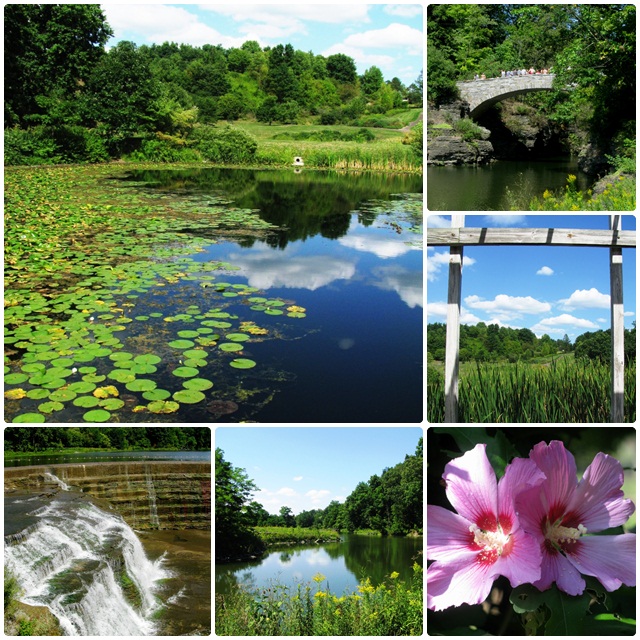 One of the highlights of my bicycle trip around Cornell University was Cornell Plantations, protected green spaces that combine 25 acres (10 hectares) of botanical gardens with the F.R. Newman Arboretum which extends over 150 acres or 61 hectares.  These botanical gardens were started in the mid 19th century and expanded substantially in the 1930s, and they are a tremendously scenic addition to the City of Ithaca.

My visit to Cornell University and all the hard work biking up the hill had been worth it. Now that I had explored what Ithaca has to offer, I was looking forward to continuing our trip to New York City.