Our Toronto travel escape was quickly coming to an end. On December 16, 2012, we had enjoyed our tour of the Church-Key Brewing Company and sampled some water buffalo products at the Ontario Water Buffalo Company. The drizzly cold day continued as we drove to our next appointment at the Farmtown Park in Stirling, previously known as the Hastings County Museum of Agricultural Heritage.

Jack Rushnell is a volunteer with Farmtown Park and welcomed us together with his colleague Margaret to give us a tour of this complex which encompasses eight buildings and 45,000 square feet of exhibit space. The museum was founded in 1997 by a group of local volunteers who wanted to preserve the region’s agricultural heritage. Most of the exhibits and the labour to create the buildings were donated by locals. Among others, the complex encompasses the Tractor Building, the Dairy Building, the Harvest Building, the Tillage Building and the Steam Engine display. One of the highlights of this extensive museum is the Heritage Village Streetscape which is a recreation of an entire rural village from the 1930s. Farmtown Park is a great Toronto travel idea for anyone who has an interest in history and agricultural heritage.

As the museum is generally closed in the winter (except for special events), we walked through three buildings, starting with an exhibition hall that features different rural work environments, for example a stable with cows, an exhibit on the Empire Cheese Company, as well as a country dining room and bedroom and the authentic interior of Whitehead’s Ice Cream & Lunch Parlour, circa 1969. 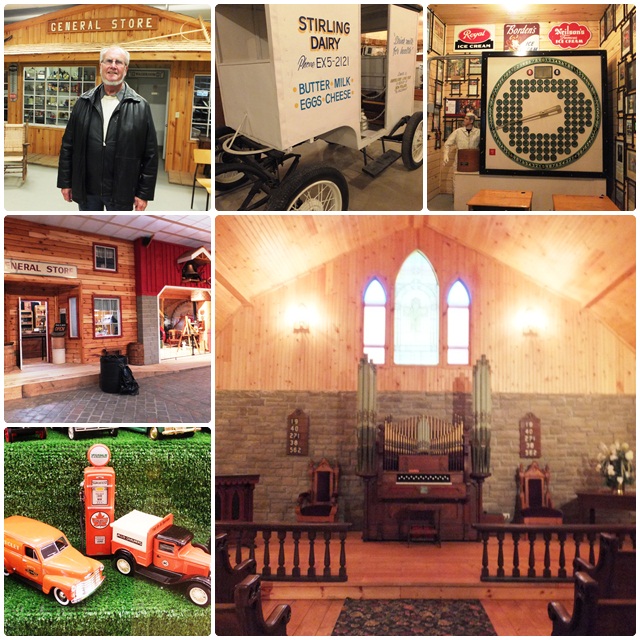 Jack added that many school groups tour this museum throughout the year, and it’s an amazing experience for city children to learn about farming, especially since so many of them are so far removed from any kind of agricultural production. He also showed us the unique Dutch Clock, which was built in Holland and used in nearby Belleville during cheese auctions from the 1950s to the 1990s. The auction clock runs backwards and starts with a high starting price that counts down. Bidders ring in as the price declines. If you ring in too soon, you might pay too much, but pressing the button too late means you lose to another bidder. So there is some stress involved in a Dutch auction.

The next building we walked into was the Heritage Village Streetscape which depicts a real country village in Hastings County from the 1930s and 1940s, complete with general store, auto repair shop, feed store, drug store and a gas station as it would have looked around the 1930s. A print shop can be seen as well as a fire hall with a vintage fire truck. Among the 19 buildings is also a blacksmith shop, a bank, a shoe store and a hotel. The country doctor’s office features a vintage X-ray machine and medical equipment that is several decades old.

Heritage Village even features a chapel with a beautiful pump organ that is often used as a wedding chapel. My expert guide Jack added that Heritage Village can actually be rented for weddings and special events and makes a wonderful backdrop for a large get-together.  He explained that the artefacts and equipment inside the stores includes countless vintage items that were donated by residents of the region. The labour to create the entire museum complex was largely donated by people in the area, a testimony to the residents’ pride in their agricultural heritage.

Last but not least, we explored the Discovery Centre, which showcases a large collection of miniature cars, trucks, tractors and specialty vehicles that were donated by a local resident. A small room holds a collection of historic toys and the front of the room is dominated by a scale model of a local town and railway depot. One life-size display shows a Husky dog on a wooden treadmill, whose labour was used to churn butter. A lot of ingenuity was used in running the farms of yesteryear and the Farmtown Park in Stirling makes a great Toronto travel getaway for people interested in learning about life in the countryside. 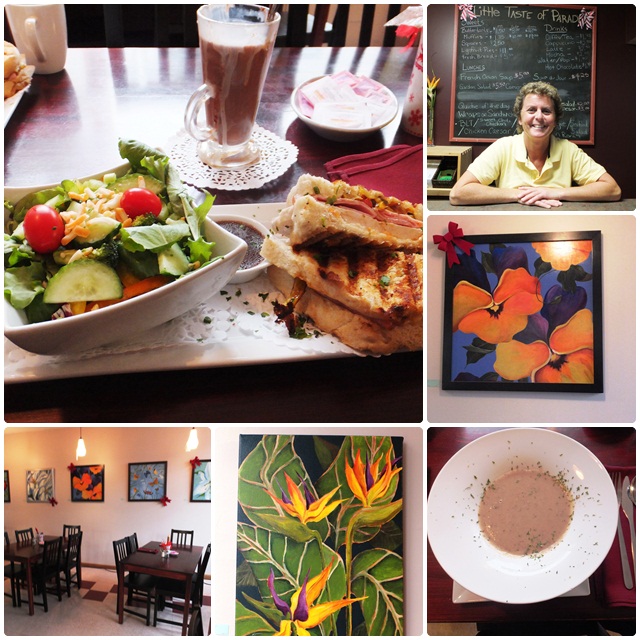 A Little Taste of Paradise

The final stop on our tour of Stirling had arrived: back in the village we made a stop at a Little Taste of Paradise, a local bakery and lunch place that specializes in butter tarts and muffins, breads and other baked good as well as light lunches. Owner Mandy Webb whipped up a delicious mushroom soup as well as a tasty foccaccia sandwich with chicken breast and salad, followed by one of her famous butter tarts. As soon as we entered I noticed the original paintings by a local artist.

Mandy told us that she started her business in November of 2011 and got an excellent price for all the bakery equipment at an auction. It took her three weeks to get organized and after working for years in nursery homes and in a local hospital, she had found her calling as the owner of “A Little Taste of Paradise”.  She added that she loves living in Stirling, and explained that her village won the 2012 Kraft Hockeyville Challenge, a contest that was looking for communities with great community spirit and a passion for hockey. More than 11 million votes were garnered by the top five communities that participated, and Stirling managed to capture almost 4 million votes – a huge sign of local pride that gave Stirling the title of Canada’s most passionate hockey community. As a prize, Stirling received $100,000 to upgrade its arena as well as $10,000 in food bank donations.

As Mandy told us about these exciting achievements, her face lit up and it was so obvious that she is proud of her small community and loves living here. During this overnight Toronto travel escape to Stirling, we had gotten a bit of an idea about what this village stands for and the hard-working warm people that live here. All the people we had met here were truly passionate about their profession and enjoyed their work and life here in this small community. There is something special about small-town Ontario…