The culinary adventures continued on our December 16 Toronto travel escape: after an educational visit at the nearby Church-Key Brewing Company, we got a chance to visit another iconic destination in Stirling: the Ontario Water Buffalo Company.

Owned by husband and wife team Martin Littkemann and Lori Smith, this company has been in operation since 2007 when the couple bought their first water buffalos from the United States. They were originally running a dairy farm but were ready for a change when a friend suggested they get into milking water buffalos. After attending the 2007 World Buffalo Congress in Italy, they made the decision to switch over to water buffalos. Today they own more than 200 water buffalos, which is equivalent to about 20% of the Canadian population of these animals.

On this cold and blustery day, the animals were huddled together outside behind a metal enclosure. Some of them were feeding, while quite a few others came over to the gate to check out who Martin was talking with. He explained that water buffalos are very curious animals, and as he was petting their heads, he added that they are also very affectionate; “they are just like big dogs”. The pleasure that these animals were deriving from his head scratching was clearly visible as they were contentedly chewing away on their food. Almost all of the 200 water buffalos have been de-horned for safety reasons, but a few of them were still allowed to keep their pointy headgear. 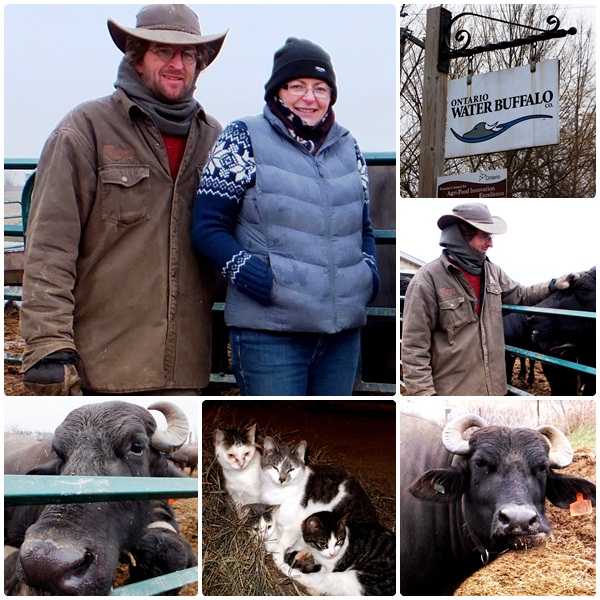 I inquired into the difference between raising dairy cows and water buffalos. Apart from the fact that water buffalo milk has a higher fat content and more solids (fat, sugar and protein) than cow’s milk, Martin explained that there is also a significant personality difference between these animal species. Out of 50 cows, one might have a real personality while with water buffalos it’s quite the opposite: almost all water buffalos have a distinguishable and unique personality. It’s not surprising then that Martin and Lori name each individual animal, and interestingly, these big creatures recognize their names and respond to them when they are called.

Some of the animals even have blue eyes and although most water buffalos have a dark brown colour, some sport a lighter coloured coat. Water buffalos are native to places like Asia, especially India, as well as southern Europe, Latin America, northern Africa and other places. As they have traditionally been living in warm-weather regions, they are not well adapted to the Canadian climate and spend most of their time inside the warm stable during the winter.

To get out of the wind we headed inside the barn where about nine recently born calves were resting on their straw-covered beds. About a dozen barn cats were strolling around, snuggling together or rubbing their heads against the calves which returned the affection by licking the cats. Martin explained that when all the animals are in the barn there is no need for heating;  the animals will produce that much body heat that he sometimes has to turn the fan on to keep them cool. Two farm dogs were also accompanying us, and one of them, a six-month old puppy, had one of her front legs in a cast, a victim of a traffic accident perpetrated by none other than a vet!

Then we took a walk to the new barn that Martin and Lori are building. Some time next year they will have a brand new home for all the water buffalos and the house next to their private home will be turned into a retail store. The new barn will improve efficiency greatly and will make their work a lot easier. From here we headed inside their family home, and coming inside, to the roaring fire in the wood stove, was a real treat after the cold and windy time outside.

We started talking about the water buffalo products that are made from the milk on Lori and Martin’s farm. The couple has partnered with Quality Cheese, a manufacturer, distributor and retailer of Italian specialty cheeses in Vaughan, just north of Toronto. The water buffalo milk from the farm gets delivered to Quality Cheese and is turned into Bella Casara mozzarella, ricotta and scamorza, a smoked variety of mozzarella with a brown skin that is stored in moneybags. 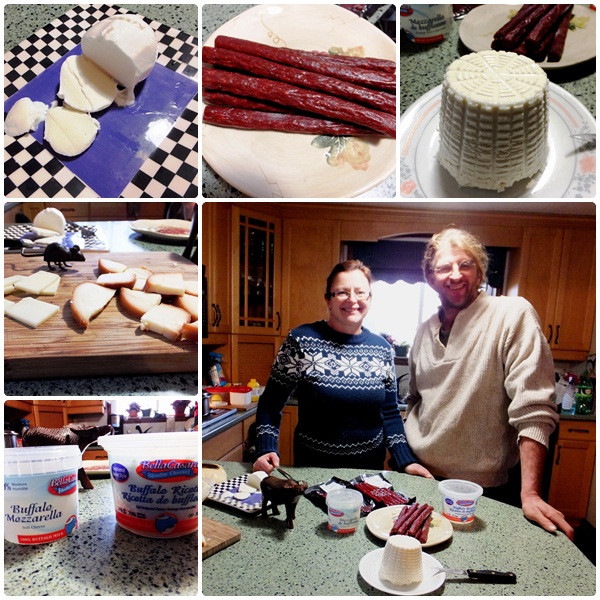 As the first water buffalo milking operation in the province, Martin and Lori’s products have even won the 2008 Ontario Premier’s Award for Agri-Food Innovation Excellence. Martin, Lori and their bovine friends have also been featured in a humorous television episode of “Pitchin’ In” with celebrity chef Lynn Crawford from the Food Network. Lynn got to work with the buffalos, she even to had to put cream on their teats before milking (and got more than one swat in the face with a dirty buffalo tail), and after this rustic ordeal, Lynn prepared a feast with water buffalo products for their entire family.

Country hospitality in Ontario is legendary, and in line with these friendly traditions, Martin and Lori invited us to taste some of their products. Within minutes Lori had cut up mozzarella, scamorza, and ricotta and as well as pepperettes produced from water buffalo meat. Lori pulled out some crackers and two types of jam which formed a perfect taste combination together with the creamy buffalo mozzarella. I learned that water buffalo meat has 80% less saturated fat and 25% less cholesterol than beef, so it is quite comparable to chicken breast meat. Buffalo milk is also a healthier choice for many people: although not lactose free it is much easier to digest than cow’s milk.

We started digging into these delicious taste treats and thoroughly enjoyed our spirited conversation when we realized that we had to get going to our next appointment at Farmtown Park in Stirling, one of the last installments of our Toronto travel getaway this weekend. We had truly had a great time with Martin and Lori, but we had to say goodbye and race off. As we were almost out the door Lori would not let us go without giving us a few water buffalo goodies from her fridge to take home with us.

Products from the Ontario Water Buffalo Company feature prominently in the Water Buffalo Food Festival which has been held for the last few years in downtown Stirling. And apart from selling their products on the farm, their water buffalo cheeses and meat products are also available at upscale food retailers in Toronto, including Pusateris, Longos and some Loblaws stores. But it’s definitely much more fun to come out to the farm, meet the animals and the couple who raise them and to buy the products on the spot.