I had already gotten a nice introduction of Stirling through my downtown walking tour and a conversation with my bed and breakfast hostess Tyla Tessier from the Old Carriage House. Now the sun was rapidly moving lower on the horizon and my Toronto travel getaway was going to include more interesting experiences in this small country town.

Organizers at the Stirling Festival Theatre had promised me a backstage tour, so all I had to do was walk across the street from the bed and breakfast to arrive at the historic 1927 Community Service Building, a place with a long and colourful history. Starting in the late 1920s, the building was originally used for community meetings and events and later found use as a police station and movie theatre. By the 1980s the building was hardly used and the municipality was considering to demolish it until a group of committed local citizens, which came to be known as the Stirling Performing Arts Committee, decided to save the building. They started fundraising and dedicated countless unpaid hours towards cleaning and improving the building.

In the 1990s, a beautiful Bösendorfer piano was purchased for a quarter of its estimated value and each of the 92 keys of the piano contributed $100 towards a fundraising campaign for the theatre. By 1996, the supporters of the theatre had raised enough money to repair the building, with the help of local craftsmen and volunteers, and to offer professional productions for the first time. Since then, more than half a million dollars have been invested at the theatre, including new seating and sound baffling in the auditorium. The building’s infrastructure, including the air conditioning system, washrooms, wiring and the box office, has also been modernized. 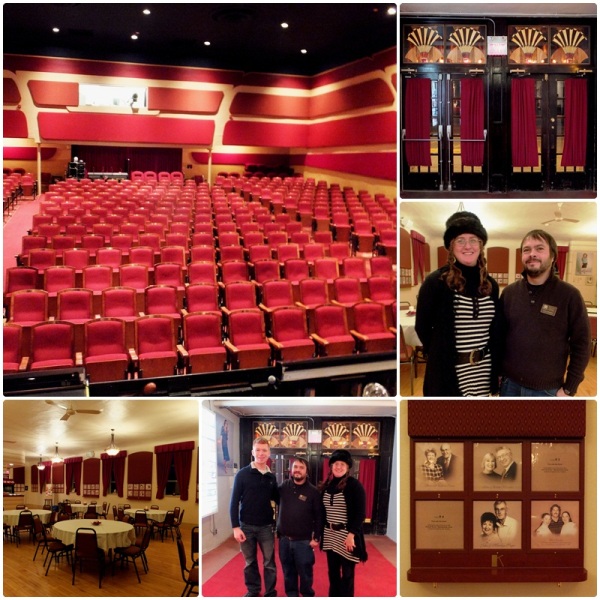 As a result, the Stirling Festival Theatre has experienced tremendous success and it attracts 45,000 visitors every year to this small country town. Large bus groups travel from Toronto and other places to see crowd favourites, such as last year’s “The Legend in Black” (the story of country music giant Johnny Cash) and a variety of musicals, plays, concerts and youth programs.

Managing Director David Vanderlip and Development Officer Laura Smith welcomed me to the theatre just after the afternoon performance had finished. Most of the audience had already left, and the actors, still in costume, were interacting and taking pictures with a few young fans.

Every year the Stirling Festival Theatre presents a Christmas PANTO show which is a re-telling of a well-known fairy tale or myth in the old British tradition.  The lineup includes a family, school and ‘naughty’ version.  This year’s “Alice in Wonderland” is loosely based on the Lewis Carroll Alice in Wonderland book.  Alice falls down a rabbit hole and goes on a magical and wonderful journey while encountering a strange and fascinating cast of characters.  Among many others, this unique musical features parody songs by Queen (Bohemian Rhapsody) and Tina Turner (Rolling on the River). 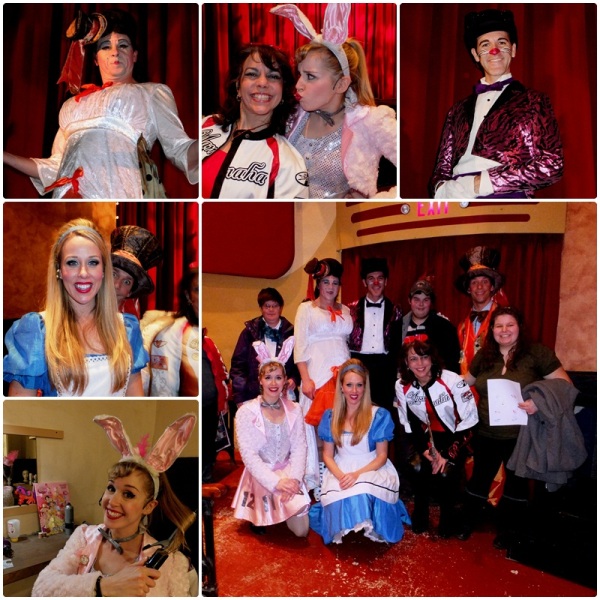 I got a chance to meet most of the crew, an outgoing and rather outrageous (in a good way) cast of characters. Kristi Frank, who plays the always cheerful Honey Bunny, took me on a backstage tour, starting with stage right where the curtains get pulled, following which we headed downstairs into the women’s dressing room where all the female performers go through their costume changes.  David added that in former times, this used to be the town’s jail  or rather  drunk tank. The facilities have been put to much better use now.

Back on stage, Dean Hollin, one of the lead actors who plays “Lacie Vivacious /the Dame” enchanted me with a passionate rendition of “You’re beautiful”, accompanied on the piano by Music Director Kieren MacMillan. After this melodic performance, Dean, still in full costume, took me behind the stage and showed me his dressing room, the only dressing room located upstairs, due to the many costume changes that are required for his role.

Dean also explained to me the role of “the Dame”, a staple character in British pantomime plays for hundreds of years. The Dame is usually single or widowed and hot to trot for men in the audience or a male character. This role is always played by a male actor in women’s clothing and usually the most colourful character in these musical-comedy theatre productions.

A local legend, Dean Hollins was part of the original lineup of actors at the Stirling Festival Theatre between 1996 and 2001, and after an absence through most of the 2000s, he has recently returned and become an absolute crowd favourite. Dean returns the favour, and although a resident of Collingwood, he loves Stirling. He even got married in this little country town in 1999! 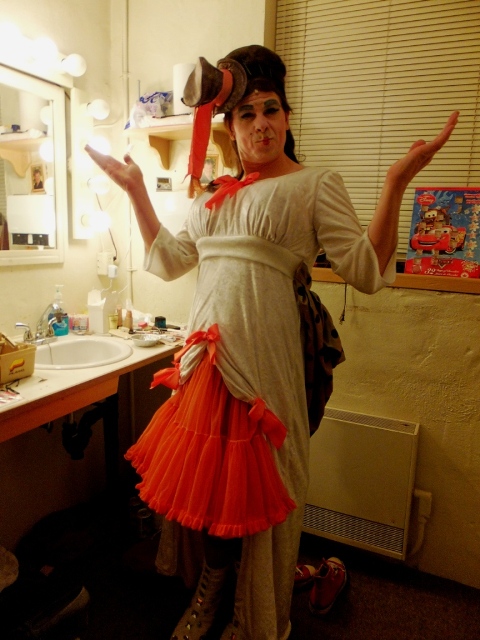 He also explained that for every Christmas panto performance, the Stirling Festival Theatre puts on three different versions: the family version, the school children’s version and the naughty version for the adults. Of the 42 performances for this year’s “Alice in Wonderland” panto, 21 of them will be of the adult naughty kind. With all this suspense, I couldn’t wait to see the mischievous performance that was waiting for me tonight.

Before heading out for dinner, David and Laura also showed me the theatre’s attractively renovated meeting room upstairs and the redecorated box office, all outfitted with Art Deco inspired design touches, many of which were created by local volunteers.  The upstairs meeting room features photographs of local benefactors who generously supported the theatre with significant financial contributions.

For dinner we headed about 10 minutes out of town, to Chubby’s Family Restaurant in the hamlet of Hoard’s Station. The restaurant is open Friday, Saturday and Sunday nights and is famous for its country buffet. I had a chance to chat with Elizabeth Hudson and her son Rod, who together with her husband and daughter run this family operation. The buffet is renowned beyond the local region for its roast beef, and there is always another meat dish, either ham, pork roast or “chubby chicken”, a special dish with 13 spices. The meat is accompanied by two types of veggies and an extensive salad bar.  One of my favourites turned out to be the creamy veggie salad with peanuts. Also an audience favourite is the large dessert table with all sorts of pies, cakes and sweet squares. 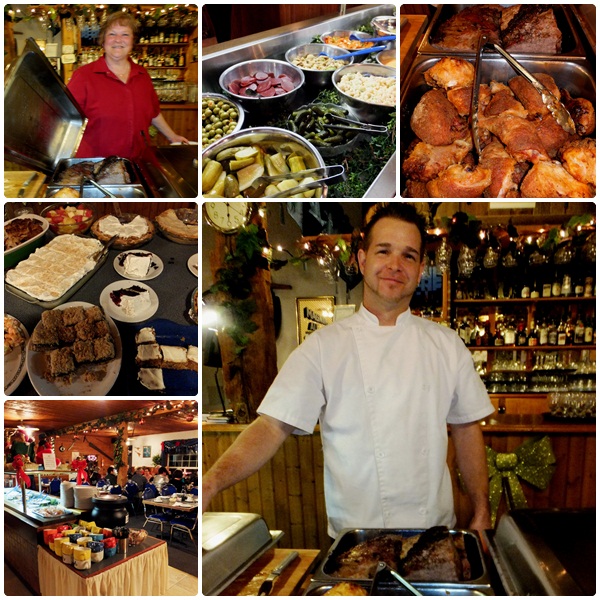 After a quick drive back into Stirling, we were ready for tonight’s naughty performance of “Alice in Wonderland”. Alice falls down a rabbit hole and ends up in a fantasy world (in this case Newfoundland) with characters such as the evil Queen of Hearts (passionately portrayed by local favourite Debbie Collins), the Cheshire Cat (J.P. Baldwin), Honey Bunny (Kristi Frank), the Mad Hatter (Michael Hogeveen), Lacie / the Dame (Dean Hollin), Alice (Larenne Vine) and Jack (Ryan Whittal). Veterans Dean Hollin, Debbie Collins and J.P. Baldwin gave hilariously spirited performances and the younger actors also displayed exceptional singing and acting talents. When the Mad Hatter dropped his pouffy pants to reveal a unique jock strap-like contraption (and a very shapely posterior), I definitely realized I was in the naughty adult version of this show. And this was only the beginning!

There was quite a bit of audience participation with actors coming into the audience, and the naughtiness factor was definitely high, to the delight of the 400+ sold-out crowd in the seats. The music and singing was outstanding and everyone had an absolutely great time. I had so much fun I’d see this Christmas panto again. Actually, it’s still running until December 31, 2012 with two special shows to ring in the New Year. That show would definitely be an amazing idea for an entertaining Toronto travel escape over New Years….