Our November 4, 2011 bicycle tour of Buenos Aires continued. After we left the Bosques de Palermo, it started raining so we had to put on our rain ponchos and continued cycling north until we stopped for lunch in the Barrio Chino, the Chinatown of Buenos Aires. Robin Gerlach, my experienced bicycle guide, knew a nice local restaurant where he often stops and he bought chicken on a skewer while I had some veggie balls. The food was delicious, and as he regularly does, Robin gave a spring roll to a local “cartonero”, a person who earns a meagre living by collecting discarded cardboard and bringing it to a recycling centre. When Argentina was hit by the economic crisis of the early 2000s, the number of cartoneros in the street started skyrocketing and to this day, many people still eke out a living in this profession.

As we continued our meal, we were joined by a stranger named Sergio who overheard us speaking English. He was born in Buenos Aires but left at age 17 and lived for 27 years in places like Pittsburgh and Maryland where he worked as an accountant. He freely shared his insights of Argentina, that he perceives it as a rather socialist country with strong unions, lots of government regulations and extensive bureaucracy. He added that in his opinion, tourism marketing services are not well coordinated and a service culture does not exist. He mentioned that waiters are on a fixed salary and don’t make their money from tips. Based on that, they do not care about providing good service. According to Sergio, the engrained mindset is “es lo que hay” – “that’s what there is” or “that’s how it is” and don’t expect anything more. It was interesting to listen to his insights about his own country. Obviously his many years abroad have strongly shaped his perception of his home country. 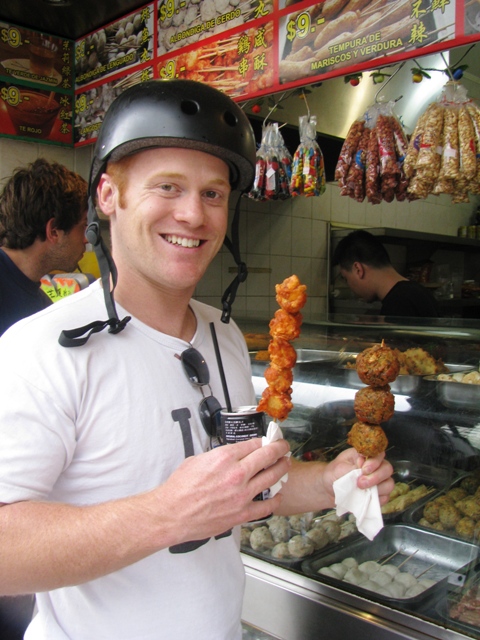 Our lunch in the Barrio Chino

We lingered for quite a while over lunch and then got going again around 4 pm in the rain which got heavier. We started cycling south again past Embassy Row in Belgrano, an upscale, newer neighbourhood in Buenos Aires. We continued on through Palermo Hollywood, an area where there were a lot of radio and television stations in the 1950s. Eva Perón got her start here as a radio and film actress. During the 1990s, many movies and videos were also being shot here, giving rise to the nickname for this area. Then we continued on to Palermo Soho, one of the trendiest and hippest neighbourhoods of Buenos Aires that is full of unique bars, restaurants, cafes, boutiques and shops.

We stopped on Plaza Freud, nowadays called Plaza Güermes, so called because it has the highest concentration of shrinks in Buenos Aires. The city is well known for having a very large number of psychoanalysts and psychiatrists. Children were playing soccer on the big square in front of the Church Nuestra Señora de Guadelupe and we made stop Fratello’s ice cream store for a delicious treat. Shortly after, we were back in the office of Biking Buenos Aires.

In talking with Robin and his business partner Will Whittle, I found out that they had both met in 2003 at San Diego State University, became roommates, best friends and since January 2010 also business partners. They both have a passion for bicycling and are continuously expanding their fleet of comfort bikes, most of which have sponsored nameplates donated by friends, family members and clients. Although Buenos Aires has only recently started to promote bicycle travel, the city has built about 75 km of bicycle trails over the past few years. The flat terrain makes it a perfect place for bicycling. 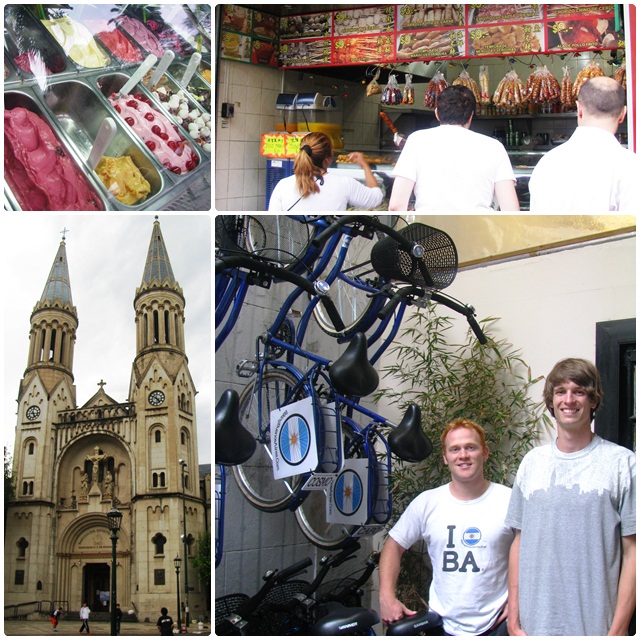 Robin and Will from www.bikingbuenosaires.com

I had had a really good day exploring the Barrio Chino and Palermo, so I thanked the guys for a great introduction to Buenos Aires. Robin took me to a photo store where I bought a charger and then I headed north to Palermo on one of the countless buses that go up and down Avenida Santa Fe.  On the way to my apartment I picked up some cheese and apples for a light dinner, but my hostess Alexia ended up inviting me to join her and her little daughter for a nice evening meal. She had made “milanesa”, a thin and crispy breaded strip of veal with some delicious roasted potatoes.

We ended up having a great conversation about life in Argentina. Alexia is a rather unusual individual, and quite different from the norm. She is a mountain climber, a martial arts expert, a web designer and co-founder of a non-profit organization called IAPICC (International Association for the Preservation of Indigenous and Contemporary Cultures). She has travelled extensively and lived in places such as Tibet, India, Nepal, Peru, Bolivia and South Africa, and her organization is dedicated to creating sustainable development in indigenous communities in the Andes through textile and weaving projects. I was fascinated by her stories. 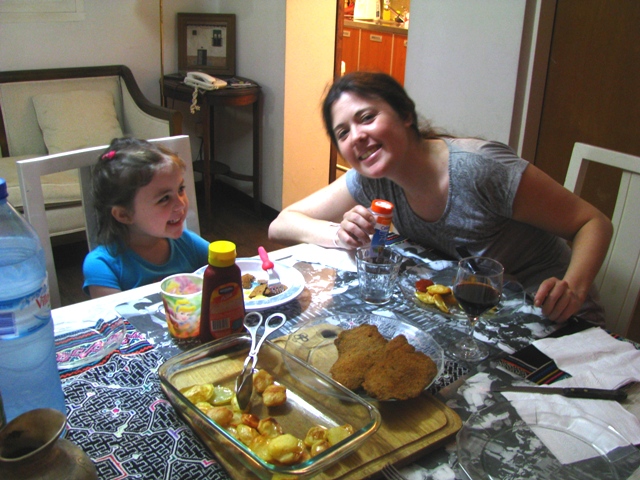 Dinner with Alexia and Antonia

One topic we ended up talking about was machismo, a male-dominated mindset that still prevails in many Latin countries. Alexia explained that the degree of machismo depends very much on the social class of the people involved. The educated and liberal-minded middle classes of Argentina have a much more egalitarian approach to life than either the upper classes or the working class. Even so, she said that a woman with her interests and background is still considered very unusual in Argentina.

I had enjoyed a delicious meal and a wonderful conversation and to show my gratitude, I got up and washed the dishes. That’s the wonderful thing about staying with the locals, rather than staying in an anonymous hotel: you make a human connection and get true insight into another culture. By 10:30 pm I was in my room, working on my photos, and resting up for another bicycle tour tomorrow. I couldn’t wait to explore more of this exciting city…

Image Gallery from Our Bike Ride through the Barrio Chino: