One of the most colourful areas in Buenos Aires is undoubtedly La Boca. This working class district was first settled in the late 1800s when thousands of poor Italian immigrants, mostly from the Genoa area, came to make a new life in Buenos Aires. The characteristic patchwork candy-coloured houses are a result of the early settlers who scrounged together the last bits of paint that they could find to brighten their dismal surroundings.  Today, this inventive approach to exterior décor has made La Boca one of the most popular attractions in Buenos Aires.

Among the most well-known destinations in La Boca is “La Bombonera”, the 49,000 seat soccer stadium that is home to the world famous Boca Juniors football team.  Images and graffiti of the most famous Boca Juniors player, Diego Maradona, can be found throughout the entire neighbourhood. Two decades after his retirement, Maradona is still a national hero. Soccer is most definitely the national sport of Argentina. The rivalry between the Boca Juniors and River Plate, the other famous soccer team in Buenos Aires, is legendary. 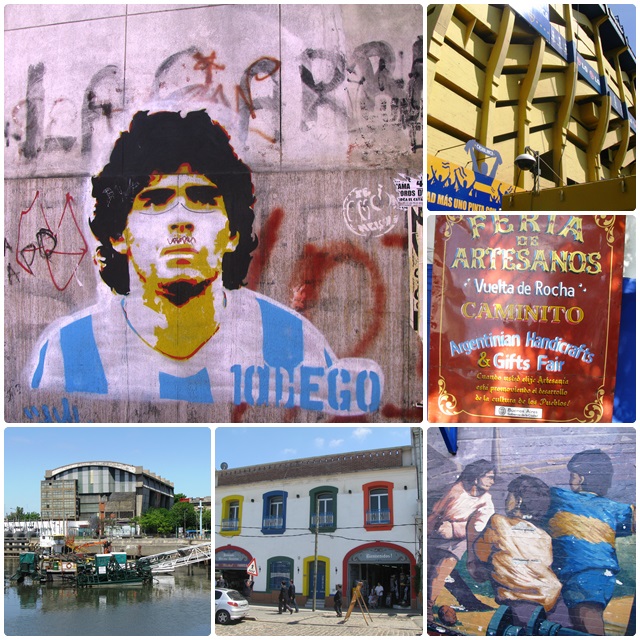 During my explorations on November 6, 2011 I got off the local bus next to La Vuelta de Rocha, an inlet on the Riachuela River whose surrounding neighbourhoods are widely considered to be the cradle of tango. Originally a dance that started in the bordellos of La Boca in the late 1800s, tango became an accepted and celebrated art form in the early 20th century when orchestras and dancers from Buenos Aires travelled to Europe. Tango took Paris by storm, and the craze spread from there to Berlin, London and other European cities. The popularity of tango in Europe brought about its acceptance in its birthplace Argentina.

From the Plazoleta de Los Suspiros I walked up a few steps to the iconic Caminito, a small street that is lined with colourfully painted houses that have been pictured on countless postcards. Restaurants, bars and souvenir shops vie for the attention of the tourists. This area is always lively and sometimes full of pick-pockets. For lunch I sat down in the outdoor patio of “La Yunta”, a long-established restaurant on Magallanes Street. Not only was I able to watch the lively action on the street from here, but I also got treated with a complimentary tango show. Two finely dressed couples were showing off their sensuous dance steps and some traditional Argentine folk dances. When they were done they took pictures with the audience and even pulled me up on the stage for a snapshot. 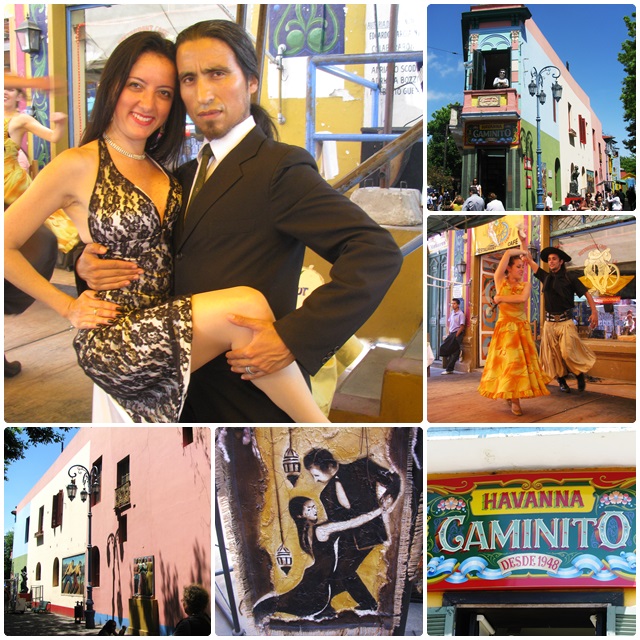 After lunch I embarked on a stroll on Calle Magallanes where several restaurants feature live tango shows. La Boca is also home to several  important museums: the Museo de Arte Moderno , the Museo de Bellas Artes de la Boca (the Fine Arts Museum of La Boca), the Museo de la Cera (Wax Museum) and the Museo del Cine (Cinema Museum). But for me it was definitely not a museum day today, I enjoyed the warm sun on this gorgeous spring day in Buenos Aires and was not about to head inside.

I continued my walk to the Parque Lezama, a popular gathering spot for locals, and admired the Russian Orthodox Church across the street. The Parque Lezama is considered to be the place where explorer Pedro de Mendoza made landfall in 1536 when he first sailed up the Rio de la Plata. The adjacent Russian Orthodox Church has five onion-shaped domes and was completed in 1904. Some of the building materials were imported from St. Petersburg and the interior features some artwork that was sent here by Tsar Nicholas II. Given its multi-ethnic  heritage, Buenos Aires definitely has an eclectic mix of architecture. 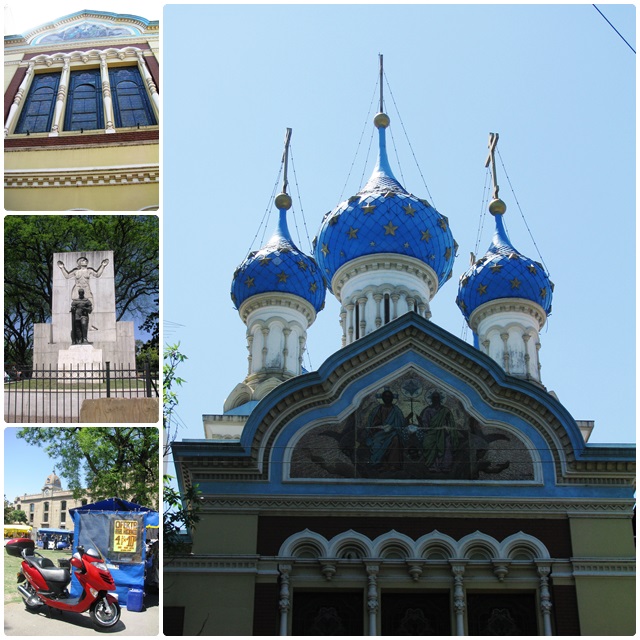 I wished I had had more time to linger, but I was booked for an adventure of a different kind: a graffiti tour of Buenos Aires on two wheels.