On November 5, 2011 our bicycle tour group with Biking Buenos Aires had already seen the famous Recoleta Cemetery and the Plaza San Martin with all its famous landmarks. We had even admired the giant metal flower sculpture on the Plaza des las Naciones Unidas. Fully enthralled by our adventure bicycling in Buenos Aires, we continued on our comfortable bicycles, following our expert guide Rodrigo Liffourena into the heart of Buenos Aires.

We stopped at the Plaza de Mayo, the symbolic heart of Buenos Aires and location of the Casa Rosada, the pink-hued presidential palace that was originally painted with a mixture of whitewash and oxblood. The Catedral Metropolitana rises on the east side of the square and dates back to 1836. It is also the last resting place of José de San Martin, Argentina’s liberator. The Cabildo de Buenos Aires was built between 1748 and 1821, was originally city hall during colonial times and is a museum today. Today’s city hall of Buenos Aires, the Palacio de Gobierno, is also on the Plaza de Mayo.  In the centre of this big square is the Piramide de Mayo, the pyramid which commemorates the revolution of the May 1810 uprising against the Spanish. Our guide Rodrigo explained that the Plaza de Mayo is a popular location for the frequent demonstrations that are held by different groups in Buenos Aires. On this day, preparations were being made for the Buenos Aires Pride Parade. 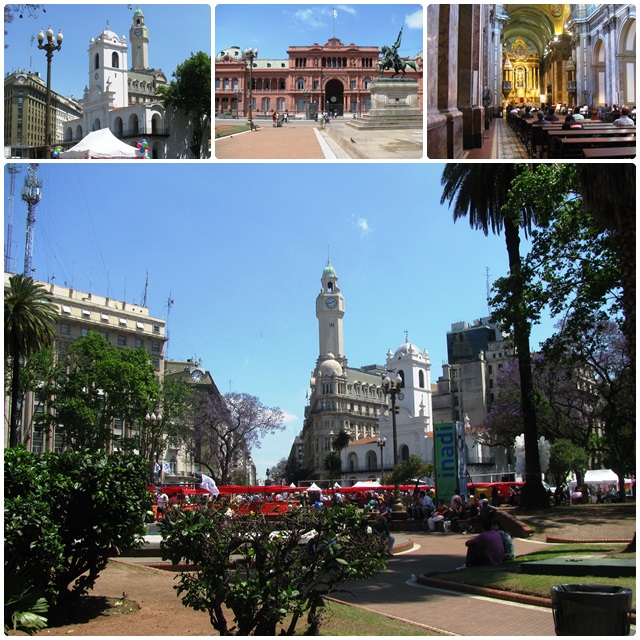 Not far away, we reached the Ecological Reserve by the Rio de la Plata (the Reserva Ecologica Costanera Sur), a recovered nature area and green space that is now an ecological paradise right in the heart of the city. All sorts of water birds live here, including some flamingos, and Porteños (as the residents of Buenos Aires are called) flock here to enjoy nature and relax by the waterfront. We made a stop as well and picked up some food from the street vendors: the famous Bondiola sandwiches are a staple street food in Buenos Aires.  All of us were hungry from our ride and relished our tasty pork shoulder sandwiches with all sorts of fixings. 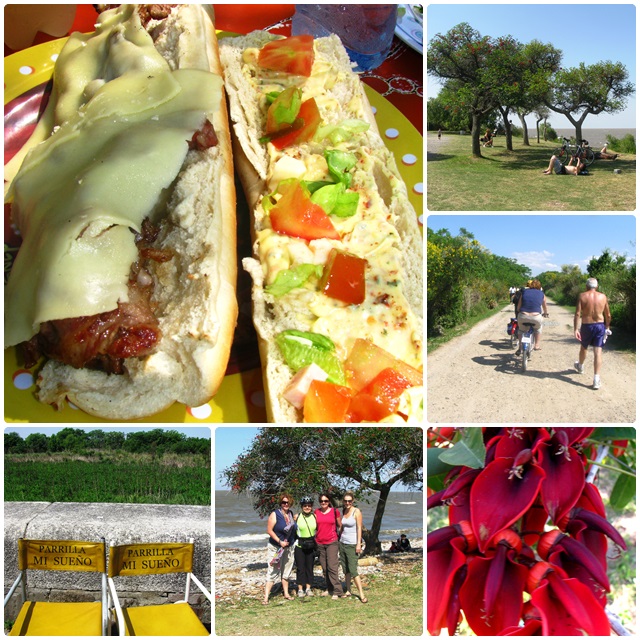 A delicious Bondiola sandwich in the Ecological Reserve

Now appropriately strengthened, we cycled to the adjacent Puerto Madero, Buenos Aires’ original port that was designed in the late 1800s. Not long after its construction the design was eclipsed by changes in technology, and the narrow wharves designed for wooden sailing ships were soon no longer suitable for the larger modern cargo ships. Thus Puerto Madero was abandoned in the early 20th century as a new commercial harbour, the Puerto Nuevo, was built between 1911 and 1925. After many decades of decay, Puerto Madero experienced a revival in the early 1990s and became the favourite district for nightclubs. Today many fancy restaurants and night clubs dot the area and fancy modern skyscrapers dominate the skyline. 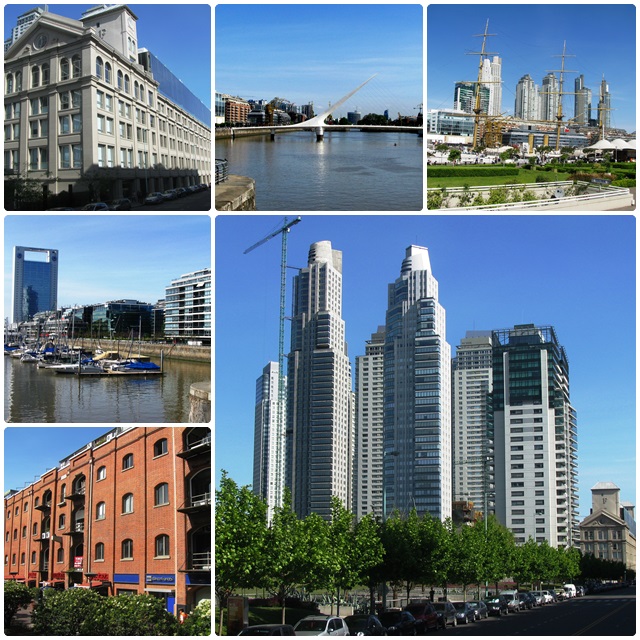 On our way back we rode through the atmospheric San Telmo area which is where Europeans first landed in 1536. This is the oldest neighbourhood of Buenos Aires and features colonial architecture, many restaurants, cafes and antique shops. Together with La Boca, this area is renowned for being the birthplace of tango, and many live tango venues are concentrated in San Telmo. We made a stop on leafy Plaza Dorrego, a bustling cobblestoned square that is surrounded by various bars and cafes. A lively antique fair was going on in the centre of the plaza. The San Telmo area is also home to the Cinema Museum and the National Historic Museum. 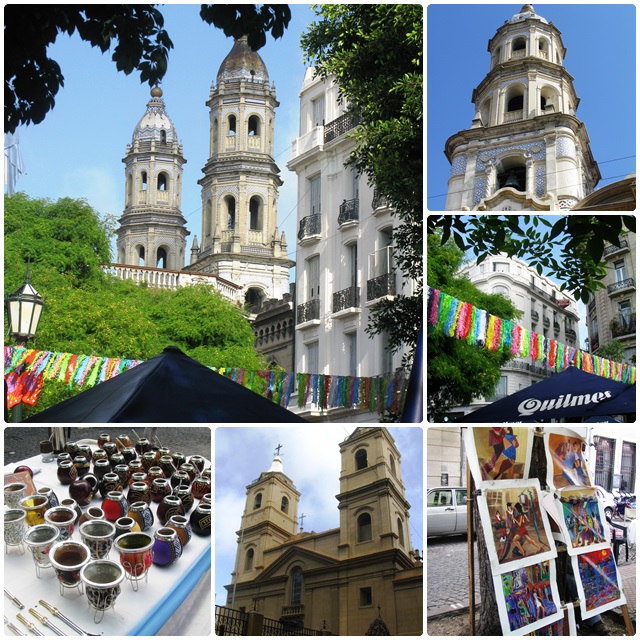 One of our final stops was on the Plaza del Congreso, the location of Argentina’s government. The Palacio del Congreso is a Greco-Roman structure that is reminiscent of the Capitol in Washington. Completed in 1906, this impressive building was designed by Vittorio Meano, the same architect who created the renowned Teatro Colón. The attractive park in the centre of the plaza is a popular gathering place for the locals. 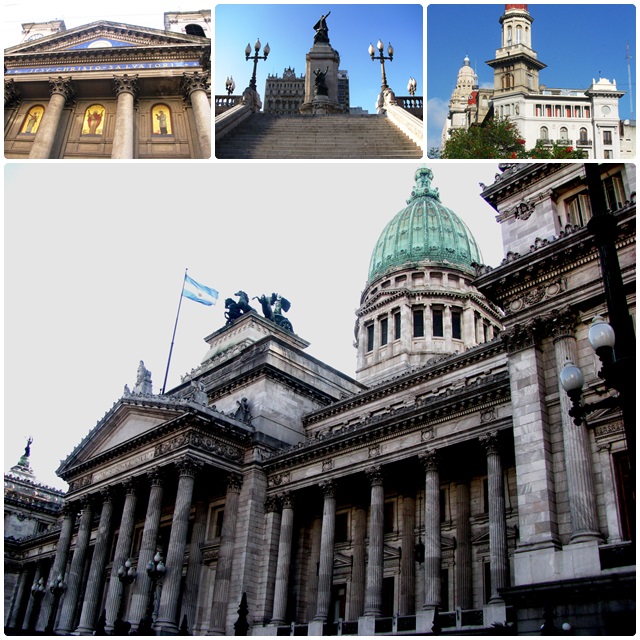 After we completed our bicycle tour, our charming guide Rodrigo continued in tourist guide mode and took a few people from our group to “El Ateneo”, a gorgeous former theatre that has been turned into a gigantic book store with a cafe and live music. Originally slated for demolition, El Ateneo was fortunately saved from the wrecking ball and transformed into a formidable venue for book lovers.

El Ateneo Grand Splendid is one of Buenos Aires’ most famous book shops.  Located in the former Teatro Grand Splendid (opened in 1919), it now holds a huge selection of books. Chairs are provided throughout the whole former theatre where patrons can have a look at the books before buying and the former stage area now holds a café, complete with a live piano player. Even if you are not looking for books, the Ateneo is a great place to hang out. At the end of a long and exciting day, we thanked Rodrigo for all his time and for sharing his local knowledge and his passion for his home town of Buenos Aires. Bicycling in Buenos Aires had been a great idea. 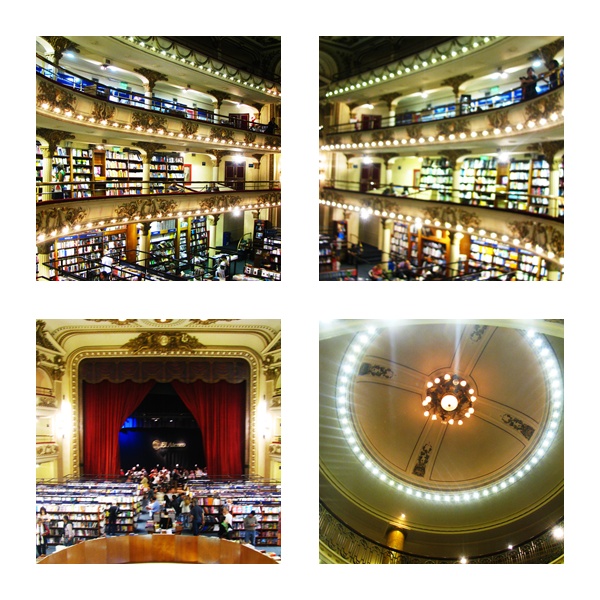