My first full day of Buenos Aires travel adventures had already been action-packed. After exploring the Plaza de Mayo and the landmark buildings surrounding it, I had taken a double-decker sightseeing tour which gave me a great overview of the city. Towards the end of the day I visited the Japanese Garden and the beautiful Rosedal Rose Garden, all part of the huge Parque Tres de Febrero. Today , November 4, 2011, was the time to intensify my knowledge of the Argentine Capital. And one of my favourite ways to do so is on a bicycle tour.

Before I left for Buenos Aires I had looked for bicycle tour companies and I found one: www.bikingbuenosaires.com. I struck up a conversation via Skype with Robin Gerlach, one of the two young co-owners who happens to be an American from Colorado. With his extremely friendly manner he said come on down to Buenos Aires and we’ll explore the city together. So here I was on an overcast Friday morning, making my way by public bus to Avenida Coronel Diaz where Biking Buenos Aires has their office. Both Robin and his friend and business partner Will Whittle welcomed me, and I could tell that these two guys just love what they are doing. 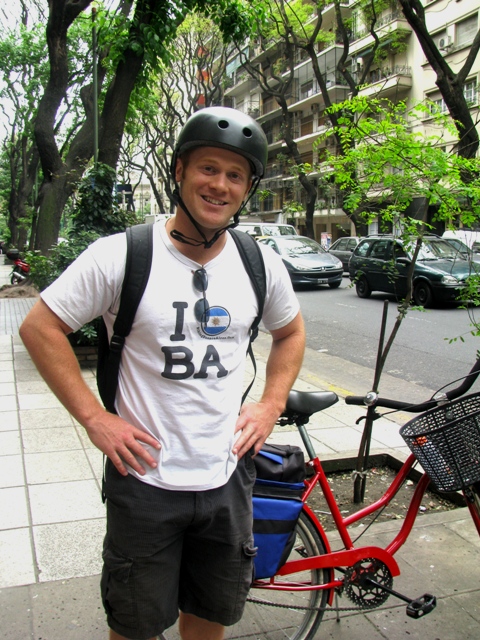 Their bicycle rental and touring business is located inside the same building as the Casa Vamos language school and there are quite a few foreign travellers floating around the building. Robin showed me his fleet of comfortable bikes, outfitted me with a helmet and we were ready to go. Compared to other cities, Buenos Aires is relatively new on the scene for bicycling enthusiasts, and it has only been very recently that the city started to construct bicycle paths. The streets are still a chaotic mess of buses, taxis, cars and pedestrians, so cyclists have to be particularly careful.

Robin was very well aware of traffic safety issues and protected me by riding on my outside on quieter side streets where we could cycle beside one another. Vehicles would often stop when he raised his hand and let us pass. On the busy Avenida del Libertador, we stopped at the Spanish embassy, which happened to be right across from the Italian embassy. It was a fitting place for Robin to give me an overview of Argentine history and the importance of Spanish and Italian immigration. The culture and lifestyle in Buenos Aires are heavily influenced by these two groups.  Cafes, pizzerias and pasta can easily be found all over Buenos Aires. Robin mentioned that the mindset of the average Porteño (= person from Buenos Aires) is very complex – he summed it up like this: they are Italians who speak Spanish, have the mindset of a French person and would like to be British. Much of the immigration in Buenos Aires came from Italy, particularly from the Genoa region, in the late 1800s and the majority of these immigrants settled in the La Boca area of the city.

During World War II, Juan Perón opened Argentina’s doors and accepted large waves of immigrants. Ironically, immigrants from Nazi Germany often arrived in Buenos Aires on the same boat as Jewish people fleeing from persecution in Europe. That made for a very interesting mix. Many of the German newcomers settled in the city of Cordoba or in different parts of the region of Patagonia, where some villages look like they are straight out of the Alps. There are also Welsh and British settlements in Patagonia. 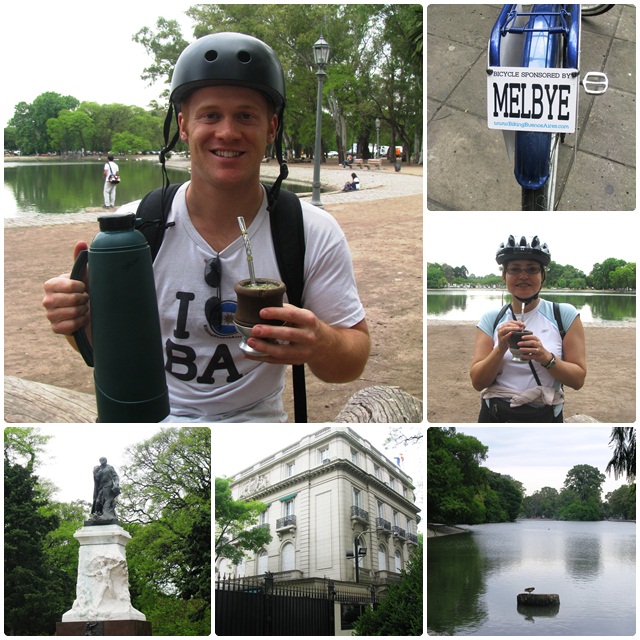 Cycling through the Bosques de Palermo

In the San Telmo neighbourhood of Buenos Aires, wealthy Argentines had been living for generations in big mansions until Yellow Fever hit in the late 19th century. Afraid of the disease, these families left all their belongings behind and relocated in a hurry to La Recoleta or even further out into the Argentinian countryside. Many of the recently arrived poor Spanish and Italian immigrants settled in the spacious mansions and usually one large family occupied a single room. The new immigrants sold off all the beautiful antique furniture that had been left behind in the mansions, and that’s how the San Telmo antique market got started. It still exists to this day.

We then cycled up to the Parque Tres de Febrero, which marks the day in 1852 when dictator Juan Manuel de Rosas was overthrown in the Battle of Caseros. His huge property was expropriated and turned into the Parque Tres de Febrero, the largest park of Buenos Aires. As we cycled along, Robin explained to me all the various trees that grow in this huge park: eucalyptus trees – originally imported from Australia, rubber trees, floss silk trees, all part of the 12,000 different species of fauna and flora in this park. The lakes that we cycled past were manmade, explained Robin, to build the elevated train tracks that go to Tigre, a small town outside the city. Famous landscape architect Carlos Thays designed this park and several other public green spaces in Buenos Aires.

Cycling through the Bosques de Palermo (the Palermo Woods), as this park is also called, Robin explained that this is also the red-light district of Buenos Aires. At night, from about 7 or 8 pm, transvestites come out to a certain street in the park and they advertise their services. Although it’s not especially unsafe, Robin does advise tourists to stay from this area at night.

Then we stopped for “yerba mate” – a typical tea-drinking ritual that is extremely popular in Argentina, Paraguay and Uruguay. Mate is similar to green tea and has excellent antioxidant properties. Robin had brought a thermos bottle full of hot water, poured the mate into a thick wooden cup, inserted a metal straw and slowly infused it. Mate is a long-standing tradition in this culture, and the server and the drinkers follow strict rules in terms of pouring the tea, handing it around and so forth. Everyone gets to taste the tea from the same cup, using the same metal straw (the “bombilla”), so this ritual is not well-suited for germophobes. I also had a taste of the mate, and as an unsweetened drink it has a rather bitter taste.

After our explorations of the Bosques de Palermo, we continued our Buenos Aires travel discoveries and cycled to the city’s Chinatown – the Barrio Chino.

Image Guide of our Bicycle Tour through the Bosques de Palermo