After visiting two iconic destinations on the outskirts of Buffalo (the Buffalo & Erie County Botanical Garden and the imposing Our Lady of Victory Basilica) we headed right downtown again. We parked our car right next to Niagara Square, Buffalo’s main square whose imposing anchor point is the Buffalo City Hall, a true masterpiece of Art Deco architecture. Niagara Square is home to several iconic buildings: the 1920s Statler Hotel , the US District Court Building (1935), the Walter J. Mahoney State Office Building (opened in 1932) and farther back on Court Street, the unique Liberty Building with its two rooftop Statues of Liberty . The centre of the square is anchored by an obelisk commemorating the 1901 assassination of President McKinley. 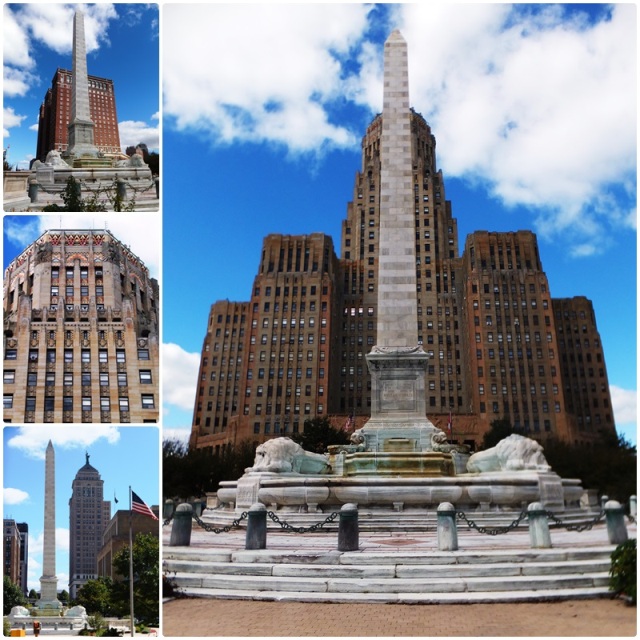 Punctually at noon we met our expert guide from Buffalo Tours in the lobby of Buffalo City Hall. We first admired the Art Deco details on the main floor of the gigantic city hall and then stepped outside to analyze the façade of this imposing building. Free tours of the iconic Buffalo City Hall run Monday to Saturday at noon and have become extremely popular in recent years.  Completed in 1931, Buffalo City Hall is one of the tallest and largest municipal buildings in the US, and with its 32 stories, it ranks among the tallest buildings in Western New York to this day. The façade of the building is adorned with numerous relief sculptures depicting images from Buffalo’s history and economy. 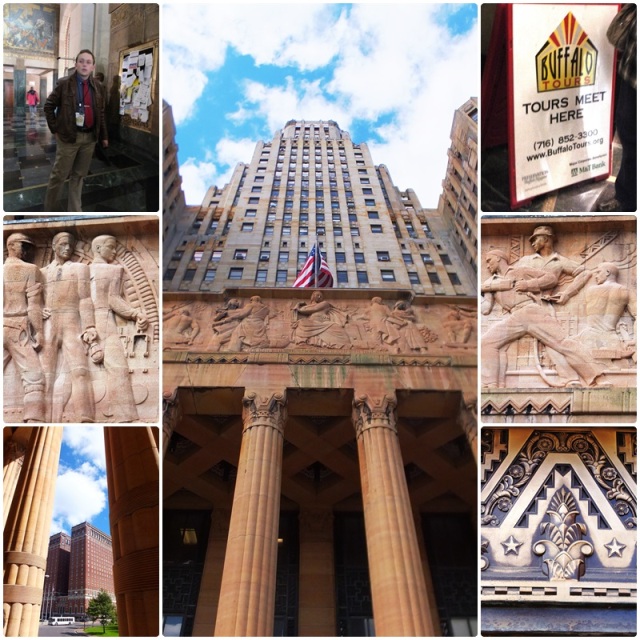 After admiring the detailed façade of the Buffalo City Hall, we stepped back inside to have a look at some of the amazing design details of this Art Deco masterpiece. The main entrance hall holds statues that represent Fidelity, Virtue, Diligence and Service. Each of the four corridors leading off the lobby features a striking colourful mural that represents Buffalo’s industry and history. Entitled “Frontiers Unfettered by Any Frowning Fortress”, the mural at the front of the lobby shows Buffalo as an international gateway city to Canada. In true 1930s glory, another mural depicts a farmer marching off into the fields, with images of the steel and building industries in the background. Other murals showcase services delivered to the taxpayers, such as Education, Protection, Charity and Construction.  All the murals tell the story of Buffalo, and even the smallest detail in the lobby exudes the spirit of the Art Deco era of the 1930s. 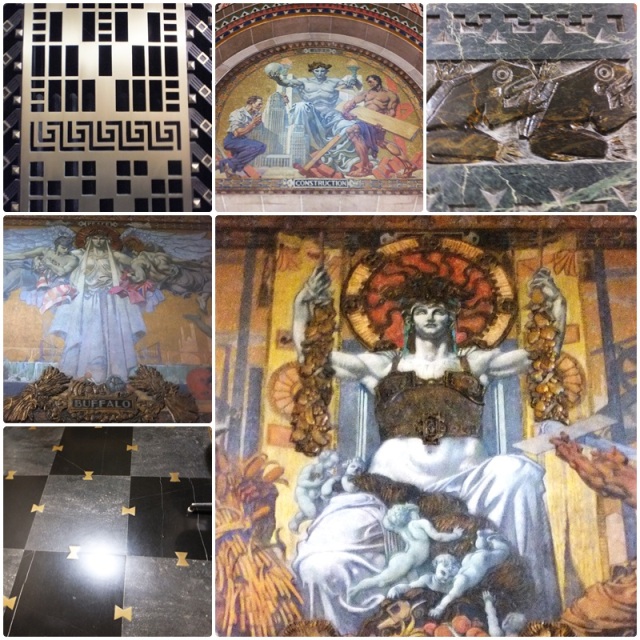 The lobby of Buffalo City Hall

Continuing on our tour of the Buffalo City Hall we even got to see the office of the Mayor, which includes a large meeting room that is sectioned off with an ornate brass partition. Paintings of other Buffalo mayors adorn the walls and Art Deco details are ever present. 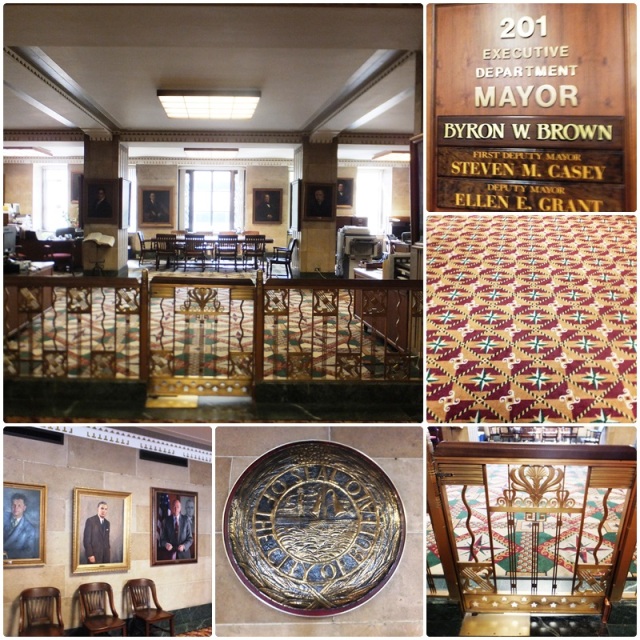 The next highlight of our tour of the Buffalo City Hall was a visit to the Common Council Chamber on the 13th floor. Even the elevators in this municipal building are vintage Art Deco installations, and a visit to this buildings feels like stepping back in time 80 years.  The ceiling of the council chamber is the most striking feature in this spacious room: this large stained glass window depicts a sunburst and is an example of Indian artistry. This municipal council chamber can seat 383 people and is adorned with typical Art Deco keystones and symbols from the animal kingdom which represent different human traits, such as the courage of the lion, the forcefulness of the hawk, the sacrifice of the pelican and the faithfulness of the dog. 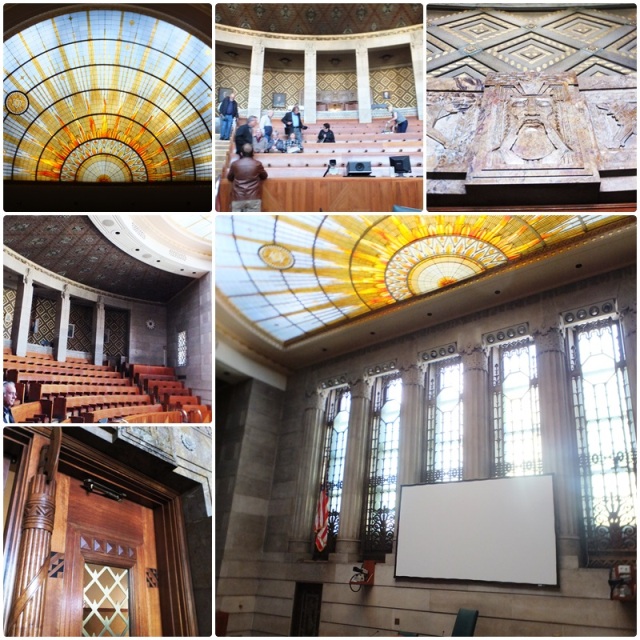 The crowning touch of our tour of the Buffalo City Hall was a visit to the outdoor observation deck. We reached it by taking the elevator to the 25th floor and then taking three additional flights up. The circular open-air walkway around the building offers a 360 degree view of Buffalo. We admired Lake Erie, gazed out towards Niagara Falls and took in the astounding collection of historic skyscrapers that punctuate Buffalo’s Skyline. The Liberty Building with its two Statues of Liberty facing east and west surely captured our attention. All of Niagara Square with its iconic buildings was stretching out in front of us. The white terracotta clad Electric Tower was gleaming in the distance and the historic Statler Hotel, opened in 1923, with its three giant wings was right across the square from us.  This hotel closed in 1984, and after a failed restoration attempt in the late 2000s, is currently being redeveloped. The lower floor public rooms have already reopened and are home to the Statler City Lobby Bar as well as the opulently decorated Rendezvous Nite Club. The Statler Hotel has also become a popular venue for weddings – an example of Buffalo’s recent resurgence. The view from the top of Buffalo City Hall was definitely the highlight of our visit to this international renowned Art Deco landmark. 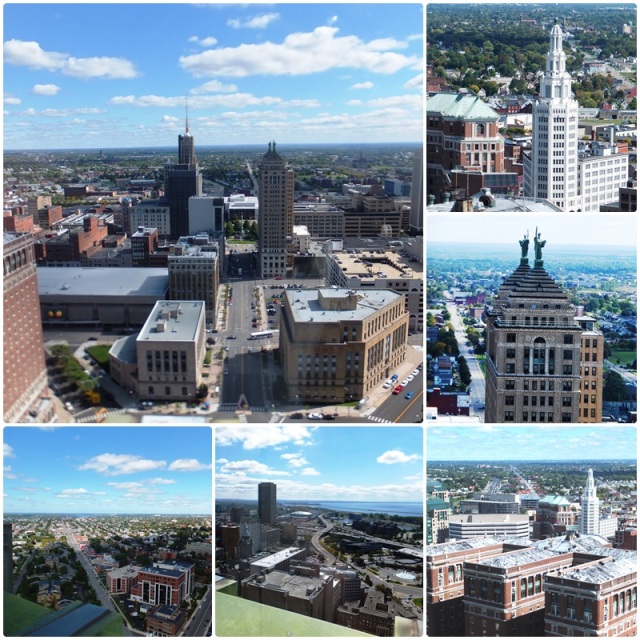 In our last few hours in Buffalo we got to explore another one of the recent hospitality additions to the city: the Lofts on Pearl . Located in the historic J.A Webb Building, a Richardson Romanesque structure from 1878, this building was restored in 2007. General Manager Bill Casale gave us a tour of the entire structure which features banquet spaces on the main and lower levels. 32 boutique hotel loft units are located on the upper levels and are equipped with high tech kitchens, sleek modern bathrooms, and one or two bedrooms.  Some of the units have phenomenal round windows that look out on the downtown streets of Buffalo. 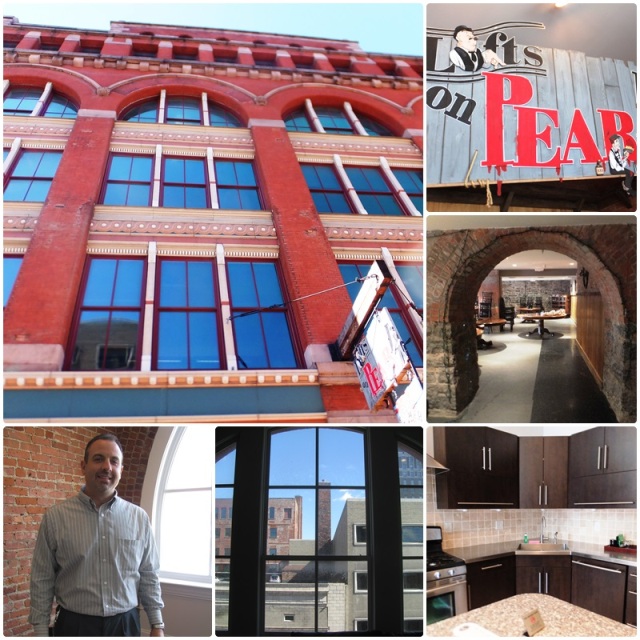 The Lofts on Pearl 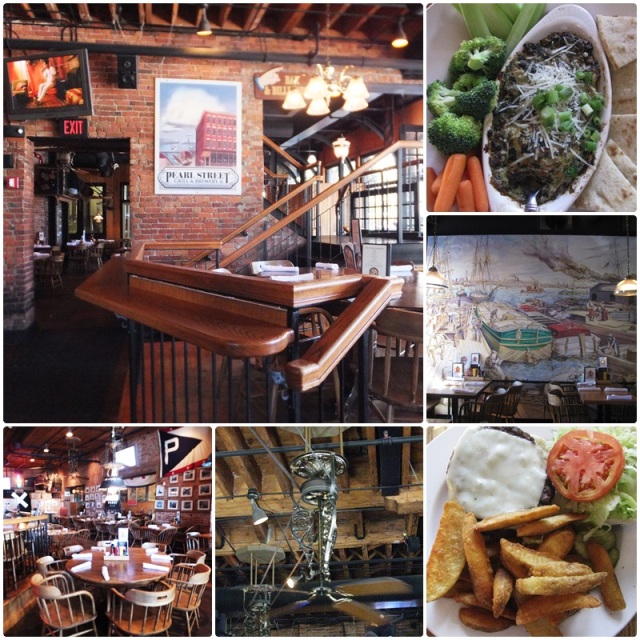 Our last lunch in Buffalo at the Pearl Street Grill

Finally, our very last stop in Buffalo prior to heading back across the border to Toronto was next door to the Lofts on Pearl at the Pearl Street Grill. We had already visited the Pearl Street Grill for dinner the Friday night before, and now we were in need of a quick lunch to get us ready for our drive home. I enjoyed the Hot Spinach & Artichoke Dip while my friend had a Maximus Burger, solid food to get us back on the road. The historic pulley-driven fans that were unearthed during the renovation of this historic Victorian-era building still kept fascinating us. We reflected on our three and a half days in Buffalo and concurred that despite all the amazing thing things we had seen in this city, there was still so much more left to discover. This will have to wait until our next visit to Buffalo.