An Evening Tour of Paris by Bike and Bateau Mouche

Paris by bike and bateau mouche – that sounded like a great – if somewhat unusual – combination to for exploring the French capital. The final point of my itinerary on April 21, 2012 was an evening bicycle tour of Paris that would get me on two wheels and on a boat, cruising down the Seine River.

I took the subway to the Eiffel Tower area and found my way to Fat Tire Bike Tours, a company that offers guided bicycle tours in English in London, Barcelona, Berlin and Paris. In the French capital they offer several different kinds of tours:  the Day Bike Tour which covers the city’s main sights; the Versailles Bike Tour; Monet’s Garden Bike tour; and the Night Bike Tour which is what I had signed up for. This tour would also get me on one of the famous bateau mouche sightseeing boats. On this adventurous excursion would I would have a chance to get to see the City of Lights up close at night.

Shortly after 7 pm our group was ready to leave and our young leader Carl took the helm of our group and navigated us safely through the streets of Paris. One of our first stops was at Les Invalides, or more properly called the Hôtel National des Invalides, a complex of buildings from the 1670s that houses the military museum of the French Army as well as the mausoleum of Napoleon Bonaparte. 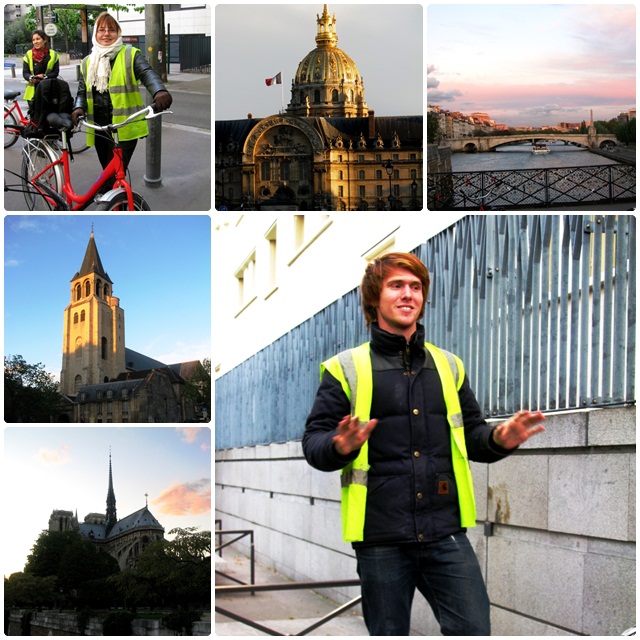 Our bike tour of Paris

As we cycled along, Carl told me that he is originally from Normandy and absolutely loves living in Paris. It was great to see the enthusiasm in this young man’s demeanour. He had just finished a trip to Australia and New Zealand and mentioned that he loves Greek mythology, Tchaikosvky and bird watching – a true renaissance man. Carl graciously and safely led our large group through the streets of Paris and provided us with interesting information along the way.

Fortunately there was not too much traffic this evening as we were cycling on some very busy thoroughfares such as Boulevard St. Germain. We cycled all the way to Notre Dame, across from which we stopped for an ice cream at the famous Berthillon Ice Cream shop, definitely the most famous ice cream shop in Paris.  The Gothic masterpiece rose up in front of us on the Ile de la Cité while we were admiring it from across the water on the Ile Saint-Louis.

Then we continued on to the Louvre, a former royal palace built in a location where a fortress had stood since the 12th century. In 1793, the museum was converted into what has become the world’s largest and most famous museum. What started with 537 paintings originally has evolved into a collection of almost 400,000 objects and 35,000 works of art in eight departments. 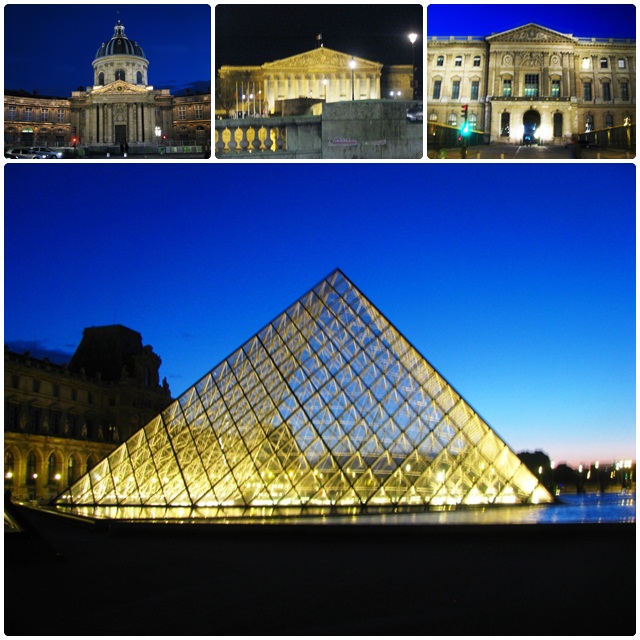 Cycling around the Louvre

We literally cycled around the Pyramid, a modern addition added in 1993 that was beautifully illuminated at night. It was a truly amazing feeling standing in front of this awe-inspiring building at night, with a bicycle, ready to explore more of the jewels of Paris at night. I was equally impressed by the Arc de Triomphe du Carrousel, a triumphal arch that connects the Louvre with the Tuileries Garden. The night-time illumination of these impressive monuments was simply magnificent and truly brought home the glory of Paris.

We cycled along the waterfront of the Seine to the mooring area for the famous sightseeing boats of Paris. Finally, by about 10:30 pm, we had reached our next destination. Our “bateau mouche” was waiting for us as we locked up about 20 bicycles. Carl, our experienced tour guide, had brought a case of wine which was included in the tour’s admission.

The bateau mouche  excursion boats have been plying the waters of the Seine for a long time. The first sightseeing boats in Paris actually go back as far as the 1860s. Many people wonder where the strange name of these vessels comes from. “Mouche” actually means “fly” (the insect), but the name is really derived from a district in the city of Lyon where these kinds of boats were manufactured. The great thing about a boat tour on the Seine is that you get to see a lot of the main sights of Paris from the river. 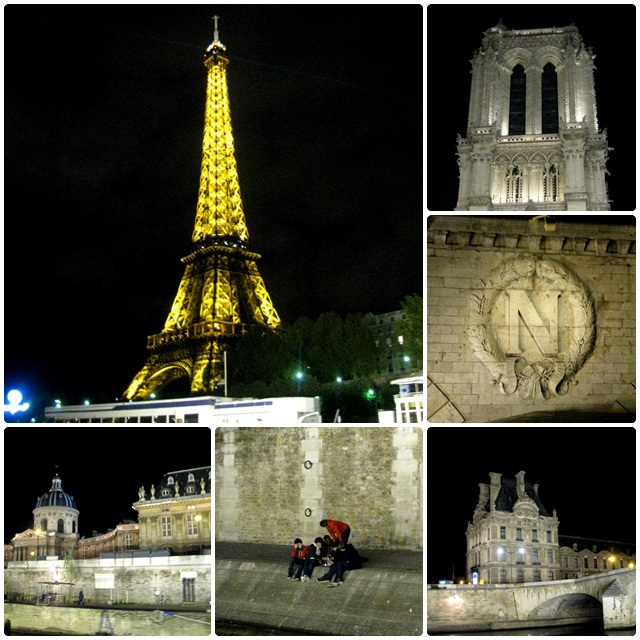 Views from the bateau mouche

Although it was a bit chilly, it was a clear evening and the magical twinkling of the lit-up Eiffel Tower kept enchanting us. Shortly afterwards the boat departed and we got to see some of the most famous sights of Paris from the boat. The Eiffel Tower was clearly in sight as we started to turn around and floated eastwards past Les Invalides, the Palais Bourbon, the Musée d’Orsay, the Institute of France and finally the Ile de la Cité with the impressively illuminated Notre Dame Cathedral.  All along the Seine we saw young people sitting by the river, either as romantic twosomes or in groups having fun.

Shortly after the Ile St-Louis we turned around and slowly passed by the Hôtel de Ville, the Louvre and the Place de la Concorde. We kept going further up the Seine and made a slow turn back right in front of the Eiffel Tower, that shining night-time beacon on the Paris skyline that was still bustling with visitors. The night-time tour on the bateau mouche combined with the cycling tour earlier had been a great and unusual way of seeing the city’s sights and was a real highlight of my stay in Paris.

Finally, by about midnight, we got back to Fat Tire Tours and all the tour participants hopped on various directions of the subway. It took me about an hour and a half to get to my apartment in the east end of Paris and by about 1:30 in the morning I arrived quite frozen and dead tired. But the bike tour and bateau mouche experience had definitely been worth it. I definitely had to get to bed quickly because I needed my energy for tomorrow’s excursion to the Buttes Chaumont.