Paris Attractions: The Cemeteries of Montmartre

Following my visit to Sacré Coeur I strolled down the southwestern flanks of Montmartre, past the Moulin de la Galette, one of the few windmills left on this iconic hill. It was one of about 14 windmills that once stood here which were used to press grapes and mill wheat.  The original Moulin de la Galette was built in the 17th century, and became a restaurant in the 19th century. Many of the famous artists that made Montmartre their home, personalities such as the painters Renoir, Pissaro and Van Gogh, frequented this establishment.

I continued my stroll along the pleasantly winding Rue Lepic surrounded by classical six-story Paris townhouses whose the main floors are taken up by many gourmet shops and restaurants. Farther down the hill I reached the Saint-Vincent Cemetery, a small cemetery with just over 900 graves that was opened in 1831. Famous painter Maurice Utrillo has his last resting place here.

Not far away is Montmartre Cemetery which has also become a popular tourist attraction in itself. Cemeteries were banned in Paris from 1786 onwards as they were considered health hazards. In the early 19th century several cemeteries opened outside of the old downtown and Montmartre Cemetery is one of these.  Composers Jacques Offenbach (composer of the famous can-can tune) and Hector Berlioz are buried here. 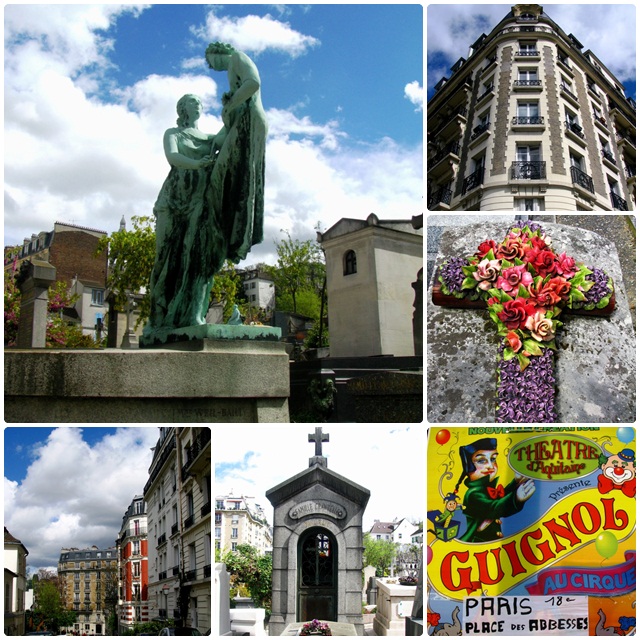 One of the many colourful personalities buried in this cemetery is La Goulue  who was a high-kicking can-can dancer, a friend of Pierre-August Renoir and a model for painter Henri de Toulouse-Lautrec. Her real name was Louise Weber and she was also often referred to as the Queen of Montmartre. She had a habit of showing off her panties to her male customers by swirling her voluminous skirts and often ended up downing her customers’ drinks. During the late 1800s she became a huge star at the Moulin Rouge which made her famous and wealthy. After leaving the Moulin Rouge her career took a tumble, and she died a penniless alcoholic in 1929, one of the countless eclectic characters connected to Montmartre.

Once arrived at the foot of Paris’ most well-known hill, I continued along the grande Boulevard de Rochechouart to see some of the Pigalle red-light district.