After a week in Hilton Head, we started to make our way north  on December 1, 2012, and decided to make a stop in Charleston, South Carolina, renowned as one of the most beautiful destinations in the American south. We made a stop at the tourist information and found out that any Charleston travel experience should include a sightseeing tour in a horse-drawn carriage.

So I hopped on the carriage, drawn by two beautiful friendly horses and together with about 9 other tourists we were listening to the information shared by our tour guide. We started to slowly move along the streets of Charleston and listened to the informative and humorous stories told by our young guide. Every once in a while we’d make a stop to let a car pass, and quite frequently the horses were itching to go, yanking us forward before the guide was ready.

In the South of Broad neighbourhood, we saw several historically significant mansions, such as the Aiken-Rhett House, the Calhoun Mansion, the Miles Brewton House and the Wentworth Mansion, some of which are now either museums or luxury hotels. Along the way we also learned about the colourful characters that were part of Charleston’s history. 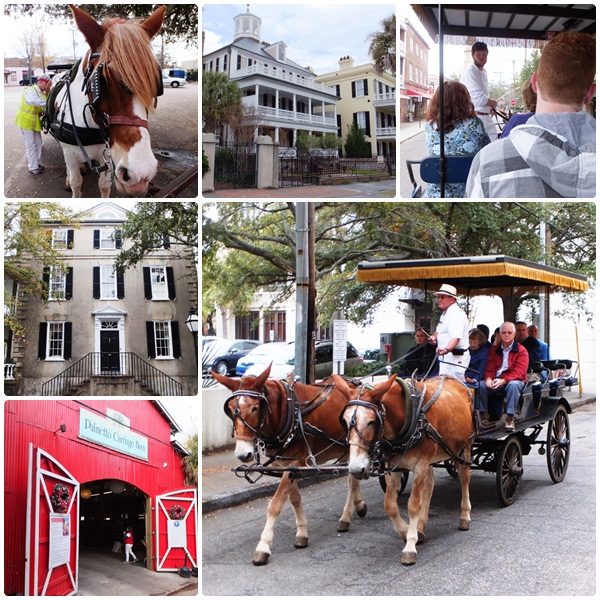 A carriage ride in Charleston

At the southern turning point of our trip at South Battery Street, we were impressed by a whole row of gorgeous antebellum and Victorian mansions that were originally owned by various merchants and wharf owners. One of them has been turned into an upscale bed and breakfast that is now called the Two Meeting Street Inn.  Across the street is the Battery, a waterfront park that was originally created as Fort Broughton in 1735 and acted as an artillery location during the American Civil War.

Our tour also took us past many of the historic churches that Charleston, “the Holy City”, is so well known for. We learned about Grace Episcopal Church, which was severely damaged in the earthquake that struck Charleston in 1886. We also caught a glimpse of St. Philip’s Church, and the clover-leaf shaped Circular Congregational Church. Our guide gave us a great tip to visit the historic graveyard of this church.

On our way back we slowly passed by Rainbow Row, a multi-coloured collection of former shops and warehouses until we headed past the Old Exchange Building, one of the most historic buildings in the United States. Completed in 1771, this was the last building that the British constructed before the American Revolution. It was also the place where the Declaration of Independence was read to the residents of South Carolina, but also a slave market during the time before the Civil War.

We had a last glimpse at Charleston’s famous City Market, a landmark since 1788, before we headed back into the Palmetto Carriage Barn, the “Big Red Barn” that is home to more than 40 horses and mules that work for the Palmetto Carriage Company. The barn is decorated with all sorts of vintage posters and advertisements and becomes a photo by itself.

The next item on my Charleston travel itinerary was a visit to the City Market, but this time on foot.